Following a parliamentary inquiry into the use of immigration detention in the UK, a cross-party panel of MPs has released a hard-hitting report calling for major reforms of a system it describes as “expensive, ineffective and unjust”.

“We detain far too many people unnecessarily and for far too long,” said Sarah Teather, a Liberal Democrat MP who chaired the inquiry which was launched in July 2014 following a number of high profile incidents of abuse at the country’s 11 Immigration Removal Centres (IRCs).

Although government guidelines state that “detention must be used sparingly, and for the shortest period necessary”, the inquiry found that in practice this policy was not being followed. Compared to other European countries, the UK detains more migrants and asylum seekers for longer periods of time. The report notes that over 30,000 people entered the UK’s detention centres in 2013 compared to just over 4,000 in Germany which receives four times as many asylum applications. It is also the only European Union country that lacks a time limit on immigration detention.

During three oral evidence sessions, the panel listened to phone calls from current detainees who had spent as long as three years in prison-like detention centres. In a written submission, one former detainee wrote: “the lack of time limit is the worst part of it as you don’t know when/if you will get out. You can’t say to yourself tomorrow I’ll be OK. Tomorrow you will be locked in, or flown back to the country where you are afraid for your life.”

The report recommends that immigration detention be limited to a maximum duration of 28 days, but it also calls for detention to be used much less frequently. Instead, it recommends the use of community-based alternatives such as those already being used in countries including Sweden and Australia that are both considerably cheaper than the UK’s current system and achieve high compliance rates. 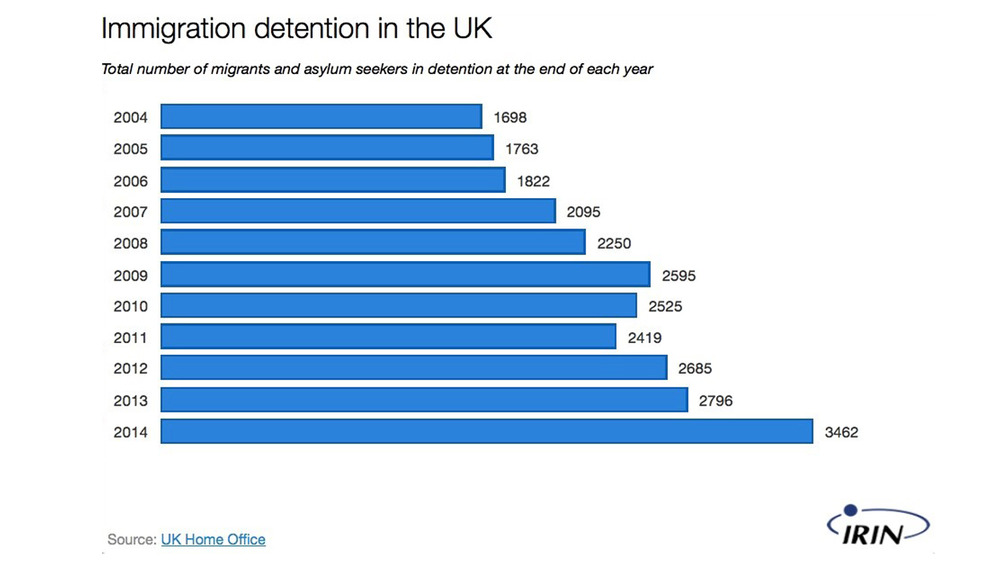 The report also makes a number of recommendations relating to conditions inside detention centres and the treatment of detainees. It argues that detainees should have better access to both legal representation and health care and that screening processes be improved to avoid the detention of trafficking and torture victims and people with mental illnesses.

“Many individuals who are currently detained have experienced trauma in their past and detention is wholly unsuitable,” it notes.

More fundamentally, however, the report calls for “a wholesale change in culture” and “a very radical shift in current thinking” about the use of detention for the purposes of immigration enforcement.

Teather emphasized that the panel was made up of MPs from across the political spectrum with wide ranging views on immigration policy generally, “but we were all united in the view that the current system…is not working and must be substantially changed.”

As the UK gears up for a general election in May, she told IRIN, “We hope the incoming government will realize there’s cross-party support for this, but also that it’ll give a bit of momentum to campaigners ahead of the election.”

Jerome Phelps, executive director of London-based NGO, Detention Action, welcomed the report as “a significant first step” towards reforming what he described as a “dysfunctional” system. “The report makes clear that reform [of the immigration detention system] is a mainstream concern and that whichever party forms the next government will have to wrestle with it.”