When the earthquake struck, Irwandi Yusuf, a leader in the armed separatist Free Aceh Movement (GAM), was startled in his prison bunk. He began to pack his possessions into a plastic bag. “The earthquake was strong, I thought there might be a tsunami,” he said. “I knew many people would run toward the main door, and the prison guard would shut the gate to stop the crowd because he didn’t know the tsunami was coming.”

Irwandi, then 44, climbed a metal pole and punched through the asbestos ceiling and tin roof. “I don’t know where I got my strength,” he told IRIN. He emerged to find a city overtaken by the sea: “It looked like people were on flying carpets, riding mattresses.” He sat on the roof for three hours, smoking to kill time as the water receded. A few years earlier, one popular GAM saying was “independence is only a cigarette away.”

At that point Aceh had been under a “military emergency” (following a period of full martial law) for more than a year as Jakarta responded to an increasingly violent separatist conflict that had pitted GAM against the Indonesian army (TNI) since the 1970s. When the ocean swallowed much of the province’s coastline, it did more than liberate Irwandi, who had been captured by Indonesian intelligence months earlier in Jakarta: the disaster halted the violence to give space for humanitarian response and unprecedented cooperation between Jakarta and the rebels.

As aid money and agencies poured in, humanitarian actors had to make delicate decisions about how to allocate disaster relief funds and re-build a province already ravaged by war.Fresh rounds of peace negotiations started months after the disaster, and within a year of the tsunami, GAM was disarmed, TNI operations ratcheted back, and post-conflict programming after three decades of fighting was under way.

“During martial law, Jakarta kept Aceh closed and isolated. But the tsunami opened up the gate completely. All of a sudden the eyes of the world were on Aceh so the government had to engage with us,” Iqbal Farabi, an Acehnese human rights lawyer who worked at the Legal Aid Foundation and the government reconstruction agency (BRR), told IRIN. “Jakarta knew that if they didn’t lift military emergency law, reconstruction was going to be impossible,” he said, referring to what then World Bank researcher Patrick Barron called “a face-saving opportunity for both sides”.

Aceh’s history is riddled with spats of conflict. In 1950 when Jakarta diluted Aceh’s then de facto autonomy by declaring it a part of Sumatra Province, violent resistance led the Indonesian capital to restore provincial status and cultural and religious decision-making. But by the late 1970s, secessionist sentiments had peaked again, in part due to oil and gas extraction in Aceh further fuelling resentment of Jakarta when little of the profits benefited Acehnese people.

GAM took shape in the 1970s, and waged a violent independence fight that had significant humanitarian impact on civilians.

Between 1999 and 2001, for example, an estimated 200,000 people were displaced due to violence; in 2003, when Jakarta declared martial law in Aceh, an estimated 125,000 people were displaced in less than one year. Explained a researcher at a May 2004 workshop at Oxford’s Refugee Studies Centre: “Martial law signalled a new round of armed conflict in Aceh during which internal, indeed forced, displacement of civilian populations emerged as a deliberate strategy of war.”

Humanitarians responding to the natural disaster were operating in a complex environment with multiple types of beneficiaries. Explained Barron: “there was a perception among donor nations that it was difficult to make a case for significant funding for post-war reconstruction when Aceh was already receiving such high levels of tsunami aid.”

Rina Meutia, who worked for the UN Office for the Coordination of Humanitarian Affairs (OCHA) and the World Bank on the tsunami response, explained: “The response created two categories of Acehnese that hadn’t existed before: affected by the disaster, and not. The conflict victims fell into the ‘not’ category much of the time.”

Farabi, the human rights lawyer and former BRR staffer, argued: “BRR tried to anticipate the social problems that would come by distributing aid to disaster victims and not conflict victims and they tried to be a little flexible where they could, but the BRA [the GAM reintegration agency created after the 2005 peace agreement] had the conflict mandate so there were competing offices and personalities.”

Iskander (one name only), who works for the local government in Lhokseumawe on Aceh’s east coast, explained that as certain communities were selected as recipients, visible changes fomented local tensions.

“There was social jealousy between tsunami victims and conflict victims,” he said. “We could see it clearly in that some villages refused to accept aid from agencies seen as worse than others, and because everyone in local communities became really suspicious of each other.”

Like many theatres of civil war across the world, Aceh’s war-time economy featured widespread corruption among and collusion between the government and rebels. Edward Aspinall, a politics professor at Australia National University, explained: “On the surface, GAM and state officials fought each other in a deadly conflict; below the surface, they were locked in an intimate embrace, seeking mutual economic advantage.”

An Acehnese resident rides on a bridge guarded by the army in Krueng Raba, Aceh Besar (File photo 2004) 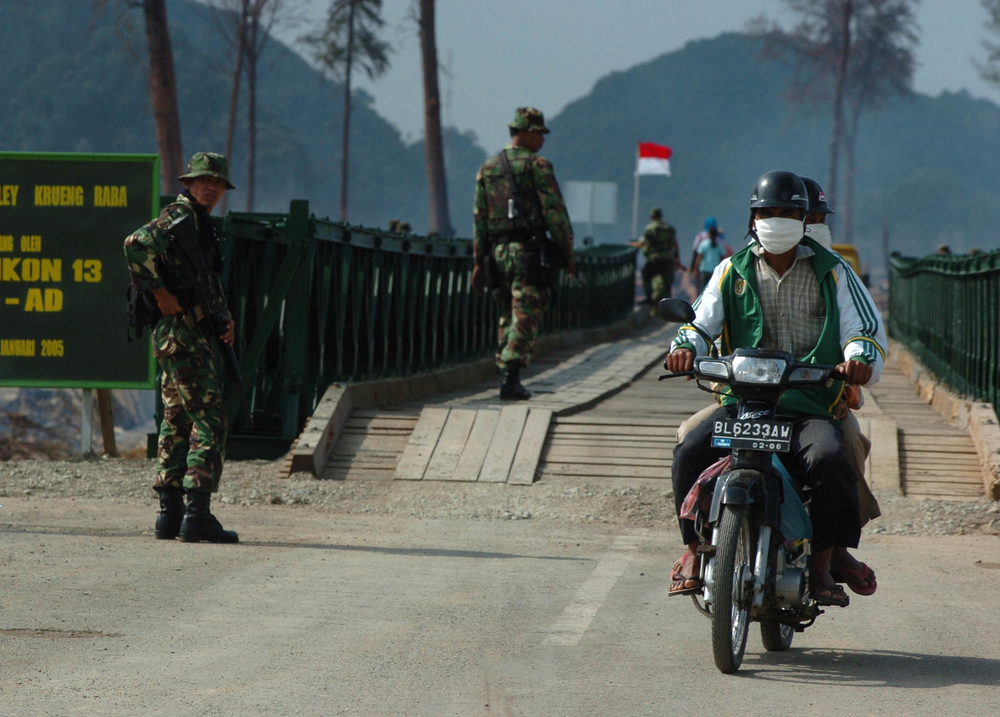 On 15 August 2005, less than eight months after the disaster, a peace deal (MOU) was signed between GAM and Jakarta, including provisions to disarm the rebels, and that Aceh would not be independent but “self-governed,” including being allowed to form local political parties there, which Jakarta had previously outlawed.

GAM retained substantial political clout in peace time, including by what Aspinall called “predatory exploitation of post-tsunami and post-conflict reconstruction” to win contracts and dole out jobs and money to ex-combatant networks.

Irwandi, who had initially fled Aceh so as not to be apprehended again, won Aceh’s governorship in December 2006, largely thanks to young GAM-aligned voters. He took a hard line against corruption and even banned logging (a major income source for GAM and TNI during the war).

According to the International Crisis Group (ICG) in 2007, Irwandi was “popular and free from any taint of corruption or abuse of power but is coming under fire for… having no idea of how to make or implement policy.” Divisions within GAM’s political operations were quickly deepening, and public dissatisfaction with former rebels governing was growing.

Political squabbling (including GAM supporters splitting into two parties in 2012) and weak governance has meant Aceh continues to be tormented by sluggish development, low-level violence and intimidation, and growing popular dissatisfaction.

The main GAM party retains what the Institute for Policy Analysis of Conflict (IPAC), a Jakarta-based think tank, called “a grassroots-based political structure that no party could rival… far more resources than other parties… [and] no hesitation about using intimidation and violence”. However, despite these attributes, May 2014 elections showed a slump in support. IPAC noted that “five years in power have not brought much tangible improvement to the lives of ordinary Acehnese, poverty remains endemic, and corruption is rife, as is extortion by former GAM commanders of local businesses and public works projects.”

Beginning in 2008 Aceh received a Special Autonomy Fund (SAF) from the central Indonesian government, pegged as a percentage of oil revenues worth hundreds of millions of dollars, and “intended to fund the development and maintenance of infrastructure, people economic empowerment, poverty eradication, and finance the education, social, and health sectors.” In 2012 a researcher at the Institute of Aceh and Indian Ocean Studies (ICAIOS) found, however, that ineffective planning for SAF funds in its first two years had increased the Human Development Index gap between Aceh and the rest of Indonesia.

According to Farabi, even with Jakarta delivering this special autonomy budget to Banda Aceh for the province’s discretionary use, “the mentality among politicians now is that this - all of this - is our money. We can take it and do what we please with it because it’s our compensation for our own suffering.”

Farabi told IRIN that while GAM members had shown political competence during peace negotiations, their leaders have not been able to work as effectively when in government. “There’s no commitment to using [state funds] for development - that is our emergency today.”

Dissatisfaction continues to fester among former combatants as well. In recent months, some ex-GAM factions have threatened to take up arms due to their disappointment with the government.

A former GAM soldier living in the eastern coastal city of Biruen showed IRIN a video clip on his phone from the late 1990s with TNI soldiers beating Acehnese men in public.

“We did not win this war, we settled for peace. And then all the money came to recover this place and was wasted.”