Dorian Wilde, 26, an activist from Malaysia, was thrilled to be invited to the 2014 World Professional Association of Transgender Health (WPATH) symposium in Bangkok, but his journey to Thailand was fraught. His experience is not unique - to him, to Malaysia, or to air travel. Transgender people everywhere face extraordinary barriers when attempting to access services, including the most essential, such as healthcare.

"At nearly every stage of the process I got questioned as if I was a fraud," he told IRIN. "'Is this really you? Are you sure?' official after official asked me." Wilde, a transgender man, carries documents listing him as a female, the sex he was assigned at birth. "The travel agent put my birth name and gender on the plane ticket," he sighed.

From being labelled as having a disorder to shouldering the burden of some of the highest rates of violence and HIV infection in the world, the perils of daily life for transgender people are multi-layered and can inflict substantial harm, experts and activists say.

Laxmi Narrain Tripathi, an activist who worked on a 2014 landmark transgender rights case in India's Supreme Court, commented: "We even struggle to access information about our own health because so many of us are economically marginalized and uneducated."

"Trans people face stigma and discrimination and harassment in healthcare, and so do providers," said Walter Bockting, a professor of medical psychology at Columbia University in New York City. "We need to strategically support providers working with transgender people, many of whom struggle bravely to do this work and expand its reach."

Research focusing on the experiences of transgender people is exposing disturbing levels of violence and discrimination. The Trans Murder Monitoring Project documented 1,123 reported killings of trans people in 57 countries worldwide from 1 January 2008 to 31 December 2012, but under-reporting is likely. According to the Joint United Nations Programme on HIV and AIDS (UNAIDS), transgender women are over 50 times more likely to acquire HIV than the general population.

The barriers to dignified access to healthcare are legal, societal, and logistical. Documents do not match appearance, services are sometimes economically out of reach, and the provision of care can be imperilled by untrained providers and even threats against those who try to provide it. Experts and activists say equitable access to healthcare underpins the realization of other human rights for transgender people. And it all begins with the messy politics of diagnosis.

The UN World Health Organization (WHO) International Classification of Diseases, version 10 (ICD-10), generally accepted as the standard definition of health conditions, is under revision and "Significant changes in the classification of gender identity and conditions related to sexuality have been proposed." WPATH has been spearheading a campaign to move "gender incongruence" categories out of the Mental and Behavioural Disorders chapter and into a more respectful and less pathological place in version 11.

"WPATH has been. [talking to] the WHO to consult on the ICD-11 revisions (to be published in 2017)," said Gail Knudson, WPATH's secretary-treasurer and medical director of the Transgender Health Program at Vancouver Coastal Health in Canada. "Transgenderism will likely be called 'gender incongruence', and not be located in the section on mental disorders."

The goal is to erode the pathology stigma associated with transgender people, while maintaining the possibility of a medical designation so that those who need to access gender transition-related health services and insurance can do so.

"For some transgender people at a particular point in their lives, in some parts of the world, having a diagnosis can be important - it allows them to access care, get reimbursed for care, and achieve the changes they want," Bockting said.

Justus Eisfeld, co-director of Global Action for Trans Equality (GATE), said: "WHO will move trans people out of the disorders section... so it's not as stigmatizing, but trans people can still access medical care through the classification if they want and need it."

The pathways to accessing gender transition-related and general healthcare are often barred by the limited access to documentation transgender people experience almost everywhere. "I do not suffer from gender dysphoria, I suffer from bureaucratic dysphoria," one trans person told a United States court.

"At the doctor's office, I register, I sit there, and then. I hear a call for 'Ms. Eisfeld' to come in because maybe my ID document still lists me as a woman, not a trans man, and the receptionist just wrote down what was there. When trans people attempt to access a healthcare facility, the first stumbling block is the receptionist," Eisfeld said.

The Global Commission on HIV and the Law noted in its 2012 report: "The denial of papers is one of the most concrete bureaucratic means by which the law erases the personhood of the transgendered."

Paisley Currah, a professor of political science at the City University of New York, has researched how government agencies define gender. "The immense number of state actors defining sex ensnares. [transgender people] in a Kafkaesque web of official identity contradiction and chaos," he noted in a 2011 paper.

A 2014 film by the Open Society Foundations (OSF) showed that documentation with one's proper gender is essential, echoing research by the Centre for American Progress and Human Rights Watch (HRW). Legal victories around the world, including in Argentina, India, Pakistan, and Nepal, demonstrate some progress in making documentation available for transgender people.

A Nepali transgender activist shows her citizenship certificate, which lists her as male, barring her from obtaining other documents and accessing services and employment. 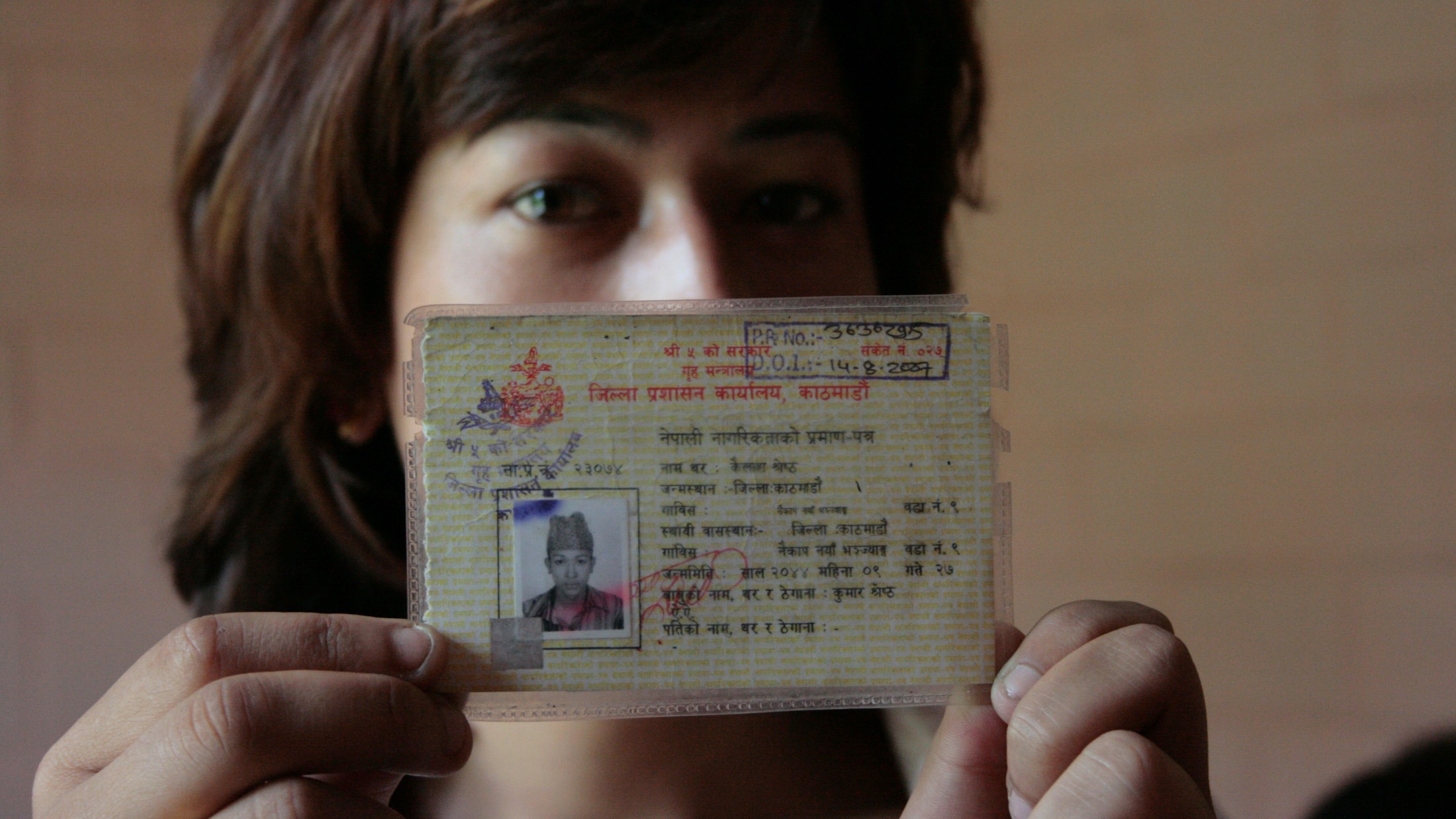 The UN International Civil Aviation Organization (ICAO) regulations allow mandates that all international travel documents, such as passports, list sex as F for female, M for male, or X for unspecified.

Nonetheless, a 2013 report on transgender healthcare issues by OSF noted that "bias against trans people is embedded in policies and practices that structure many of the routine activities of daily life, such as forming a family, obtaining an identity document, using a public restroom, having a job, accessing health care, or even walking down the street."

"Bias against trans people is embedded in policies and practices that structure many of the routine activities of daily life, such as forming a family, obtaining an identity document, using a public restroom, having a job... or even walking down the street."

Laws can sometimes fuel violent aggression. In Kuwait anyone found "imitating the opposite sex in any way" faces a year in prison, a substantial fine or both. In Malaysia activists have challenged laws that mean "transgender women face a daily risk of arrest just for being themselves", according to HRW.

The Global Commission on HIV and the Law says repressive legal environments such as censorship laws go beyond the lack of. [proper] documents and include laws that criminalize male-to-male sex (which affect transgender women who retain legal identity as male) and either allow police to target, abuse and arrest transgender people or turn a blind eye when they do, encouraging impunity. Restrictive NGO registration policies can be just as exclusionary.

Even when transgender people can access healthcare, practitioners are not always informed or amenable. "I've met some doctors who... want to provide care for transgender people, but even if they are scientifically interested or. see it as part of their duty... they are scared of the social consequences," said Malaysian activist Wilde.

Natt Kraipet, coordinator of the Bangkok-based Asia-Pacific Transgender Network (APTN) commented: "The care isn't particularly good. Generalists tend to not know much about our healthcare needs. They don't know where to send us - the male or female ward."

The UNAIDS regional director for Asia-Pacific, Steve Kraus, noted that "Specific services for transgender people. [are] practically non-existent, particularly in resource-poor settings. Even in so-called sophisticated settings, people are generally receiving surgery, hormones, implants, but... [not] advice, counselling, psycho-social support... [which] increases vulnerability to HIV and other issues."

The learning curve for healthcare professionals is not steep. OSF researchers found that "Many of the services trans people need to stay healthy and to transition to whatever degree is appropriate for them... are routinely provided to non-trans people."

Bockting said many general healthcare providers have a "keen scientific interest" in transgender healthcare issues. However, "When doctors and nurses learn about all the hardships... the barriers for the communities... for their own interventions, including the legal limits of what they can do for a patient, there is a degree of outrage and frustration among providers who are committed to healthcare. [and] learning about transgender issues. for the first time."

The socio-economic barriers to care are often a huge hurdle, especially when there are so few caregivers. "The gap between transgender healthcare specialists and transgender people is enormous. It's too expensive and specialized," said APTN's Kraipet.

Indian activist Tripathi commented: "Even WPATH is too elite for most of my hijaras [people assigned male at birth with feminine identity and appearance, sometimes called transgender women]. These experts who have their fancy meetings to talk about us and our needs - they should be with us. see how we live."

Cianan Russell, a Bangkok-based activist, stressed that care should not only focus on interventions such as genital surgery. "In situations where there is weak mental health infrastructure coupled with easy access to medical interventions, you can walk into a clinic and say, 'I want this operation done to my body'. If you have money, it gets done and you go home, but there's no counselling or follow up."

Using identity terms in policies, protocols, and programmes can be confusing and contested. The Yogyakarta Principles cemented the right to self-identify one's own gender, but listed no terms.

"Transgender" has become an umbrella term for people with gender-variant identities, but it is not universally accepted, and the terms people choose can have powerful impacts.

Nearly 75 percent of respondents who chose their own identity term were assigned female at birth but put their identity on the "transmasculine spectrum", pointing to a blind spot of knowledge about transgender men.

Kraus of UNAIDS cautions that "we should not make assumptions about the sexual preferences or identity of transgender women or. men, and this is precisely why more. research is needed, led by transgender people."

Many HIV interventions have traditionally used "transgender" to refer to male-to-female transgender people because they represent an at-risk population, but Kraus said, "The term transgender does not apply to transgender women only, and HIV and other health issues affect both transgender men and women."

Wilde, who has published videos of his transition process online, pointed out that "When you lump trans-men together with trans-women, it's lumping completely different issues and experiences under one heading, which is harmful. It will make our [transgender men's] visibility and attempts to gain visibility even more difficult in the future because people will say, 'You already have your own data category'."

Assuming that the sexual behaviours of transgender men mirror those of lesbian women can also cause harm. "It's a dangerous assumption that the type of sex trans men are having is low-risk, lesbian-like sex," Russell said, adding that exclusion from research and outreach can fuel the idea that healthcare access is not an option for trans-men.

Eisfeld commented: "The subconscious mechanisms of exclusion that are ingrained in us... require conscious efforts to be undone."