Read about what we achieved.
OUAGADOUGOU

Burkina Faso’s next elections are not due until November 2015, but political tensions have risen in the past year owing to suspicions that President Blaise Compaoré is looking to prolong his 27-year rule by contesting the polls.

An expanding coalition of opposition groups and civil society organizations has staged rallies calling for Compaoré’s departure and promising to build momentum and force a change. Compaoré has not explicitly said he will seek re-election, but plans for a constitutional referendum to scrap the two-term limit for the presidency are seen as a sign of his intention to run.

Why the clamour for change?

Compaoré’s critics say he has monopolized power for far too long. They contrast Burkina Faso’s experience with that of neighbouring countries like Benin and Ghana - all far from perfect, but at least now used to leaders being peacefully voted out. There is also concern that Compaoré will try to install his brother, François, a highly influential adviser with extensive and controversial business interests, as successor.

“Blaise Compaoré wants to be king of the country and it is just not possible,” said Smockey, a rapper-turned-political-campaigner. “We will use all the legal means we have to stop him.” Smockey, real name Serge Bambara, is now a leading figure in the Balai Citoyen (Citizens’ Broom movement) formed in July 2013 to highlight the grievances of ordinary citizens and turn up the pressure on the president.

Is Compaoré ready to step down?

The 63-year-old president has presented himself as the guarantor of domestic stability, steering Burkina Faso away from crises that have plagued its neighbours. He has tried to enhance his reputation as a regional peacemaker, mediating in the conflicts in Côte d’Ivoire and Mali as well as helping ease political tensions in Togo.

Compaoré has been careful in outlining his intentions. Talking to the Paris-based weekly Jeune Afrique in 2012, Compaoré said Burkina Faso had become a “stable, united and open country”, adding that the Burkinabé were primarily interested in the development and progress of their country.

How democratic is Burkina Faso?

Burkina Faso has been described by some analysts in the past as a “semi-authoritarian” state. Despite his military background, Compaoré has identified himself with a steady campaign of constitutional change and political reform. His supporters say the main pillars of democracy are in place: political pluralism is well-established; press freedom is largely respected; civil society is fast emerging, with human rights activists, trade unionists and anti-corruption campaigners allowed to voice their concerns; there is regular consultation between the state and traditional leaders, particularly in rural areas, and an independent commission is in place to supervise elections.

But opponents say much of that is a facade, that there is no real separation of powers between a strong-armed executive, a supine legislature and an incompetent judiciary.

They cite past events to boost their arguments and slam the military as unaccountable. There is a relentless focus on Compaoré’s own take-over in October 1987 and the assassination of the former president, Thomas Sankara. Another key reference is the 1998 murder of journalist Norbert Zongo which sparked an unprecedented wave of protest and tarnished Burkina Faso’s reputation.

Is corruption an issue?

Compaoré may laugh off rumours of his brother François taking over, but there are persistent accusations of nepotism and corruption, notably in areas like gold mining and real estate. Anti-corruption campaigners say the growing gap between rich and poor is generating strong public antipathy towards Compaoré, while Western governments have called for stronger legislation for more transparency in public and private sectors.

“If you go to an opposition demonstration now, you will always hear people talking about corruption, and that is how it should be,” said Dr Claude Wetta, executive secretary for the National Network for the Struggle against Corruption.

Why keep Compaoré then?

His supporters say a vocal, publicity-conscious minority is out of step with a more cautious, silent majority which has no problem re-electing him regardless of constitution-tampering. The ruling Congress for Democracy and Progress (CDP) and like-minded groups have staged their own demonstrations, presenting Compaoré as the candidate of stability, continuity and sustainable development and have dismissed the opposition as opportunists and malcontents with no serious agenda beyond removing Compaoré.

“Do you really see any signs of insurrection here in Ouagadougou? Those who criticize the president are mostly jealous,” said Adama Zongo, a senior CDP figure.

Can Compaoré stand and win?

“Those who criticize the president are mostly jealous”

Compaoré has won a series of largely uncompetitive elections. He won 80 percent of the vote in 2010. Opposition activists acknowledge that Compaoré is politically savvy, and able to use patronage networks and alliances with traditional leaders, particularly around election time.

“In Burkina Faso when you have a chief, unless he is dead, you don’t change him,” an opposition veteran observed.

Compaoré may no longer have an unstoppable party machine after the defection of key CDP members to the opposition movement, but rights groups have questioned the motives of those who have defected, suggesting they are making a calculated political move, rather than taking a principled stand.

Is a Compaoré-opposition rapprochement possible?

In a report sponsored by Denmark’s Ministry of Foreign Affairs analysing the political situation in Burkina Faso in the build-up to elections, the authors noted: “a successful political transition in 2015 and a more robust response to the grievances expressed by the population are... the best chances to maintain peace and stability.”

Opposition demonstrator with poster opposing the referendum and creation of a senate at the 4th August Stadium. (May 31, 2014) 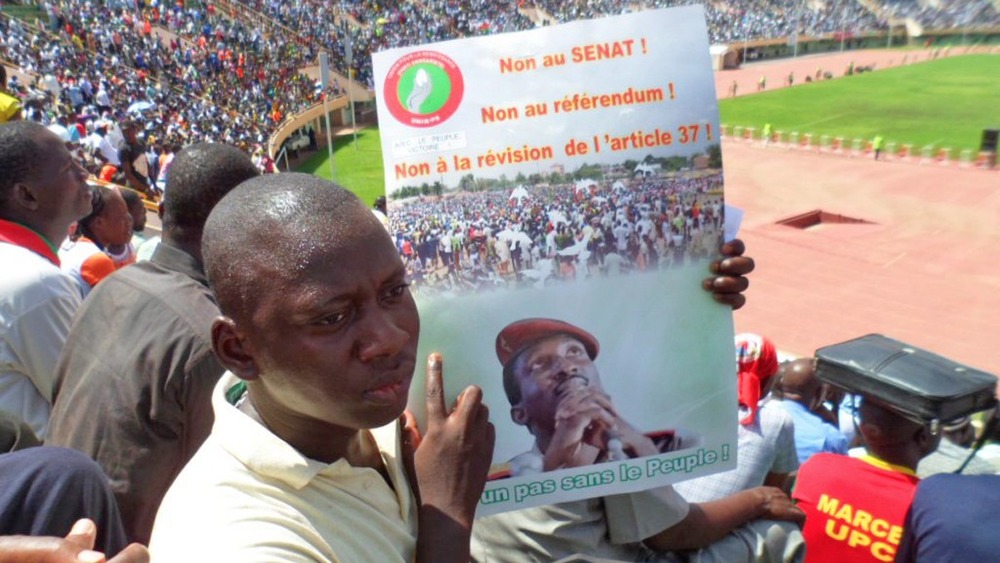 Given Burkina Faso’s past history of coups and stand-offs, some observers warn that another military intervention cannot be ruled out. Compaoré survived a mutiny in 2011, with presidential guardsmen among the mutineers.

He has supported reconciliation in the past, notably in May 1999 with the creation of a College of Wise Men. Academics, religious leaders and former politicians reviewed Burkina Faso’s history since independence and recommended an end to impunity, calling on the state to become more accountable, but there was little follow-up.

The opposition argues that Compaoré is adept at “window-dressing”, backing donor-friendly initiatives on governance, but very controlling when it comes to implementation.

After a rash of demonstrations in the second half of 2013 there was an attempt at dialogue. In January 2014, a panel of mediators was put in place, headed by former president Jean-Baptiste Ouédraogo, but the initiative foundered as both Compaoré and opposition supporters accused each other of blocking progress.