More than a third of South Sudan’s population is at risk of severe food insecurity as a result of the ongoing conflict, and the international community, NGOs and local organizations are sounding the alarm over an impending famine.

Since December when the country’s feuding leaders, President Salva Kiir Mayardit and former Vice-President Reik Machar, began a protracted and deadly civil war, millions have been uprooted and their homes and livelihoods destroyed.

The UN Security Council on 25 July described the food security situation in South Sudan as “the worst in the world”.

IRIN unpicks some of the issues surrounding possible famine.

How bad is it?

Of South Sudan’s roughly 11 million people, 3.9 million are (or were) projected to be in emergency or crisis levels of food insecurity between June and August 2014, according to a 29 July World Food Programme (WFP) Situation Report.

The UN Security Council on 25 July described the food insecurity situation as “catastrophic” and said “it may soon reach the threshold of famine.”

Leaders from the UN, the USA, the European Union as well as regional leaders across Africa have called for greater humanitarian assistance and a rapid end to the conflict in order to avert famine.

The worst affected parts of the country are the three conflict-hit states, Unity, Upper Nile and Jonglei.

“The world should not wait for a famine to be announced while children here are dying each and every day,” said UNICEF director Anthony Lake, speaking after a visit to South Sudan.

Only half of the 3.8 million people needing some form of humanitarian assistance have been reached, according to the UN Office for the Coordination of Humanitarian Affairs (OCHA).

Unity, Upper Nile and Jonglei states have been particularly hard to access due to fighting and the rainy season, which has made many roads impassable.

According to the South Sudan WFP logistics cluster, as of 25 July, nearly all major roads to Unity, Upper Nile, and Jonglei states remained closed to traffic, and most other areas are passable only for light vehicles.

Ongoing hostilities have significantly impeded humanitarian access. OCHA reported in its 17 July Situation Report that in Rubkona County, Unity State, the rapid response team delivering food assistance was “disrupted by insecurity” and could only reach 8,000 of the 37,000 people it was targeting in that area.

Poor roads and conflict have meant that agencies have had to increasingly rely on costly airlifts, but these too have been made difficult by poor infrastructure. “Due to the deteriorating conditions of airstrips, most locations are only reachable by helicopter which can carry a maximum of two tons per rotation. This impacts the amount of humanitarian supplies that can be delivered on a daily basis and current helicopter requirements are insufficient with the increasing demands,” noted a 25 July WFP Logistics Cluster Update.

Bentiu airstrip in Unity state is still shut pending renovations, and it is unclear when it will become operational again. The airstrip in Rumbek is also damaged and can only handle helicopters at the moment, and Malakal airport was closed on 26 July.

The violence has also forced many families to abandon their fields and livestock during the planting season, which starts in March and lasts until June. A Famine Early Warning Systems Network (FEWS NET) Seasonal Monitor reported that there has been reduced planting in the conflict-affected states.

Therefore, many are reliant on humanitarian aid in order to survive. But ensuring the safe passage of food and critical supplies is an uphill task, and aid is often looted as towns and villages frequently change hands.

“Recently, 4,600 metric tonnes were looted, which is enough to feed a population of 275,000 per month [not “for a month”],” said Joyce Luma, WFP South Sudan country director.

Why hasn’t famine been declared yet?

The Integrated Food Security Phase Categorization (IPC) scale defines a famine (phase 5) as “the absolute inaccessibility of food to an entire population or sub-group of a population”. For a famine to be declared a number of conditions must be met, including a death rate of greater than 2 per 10,000 people per day, a general acute malnutrition rate of greater than 30 percent and an almost complete lack of food for more than 20 percent.

“We do have 1,700 cases of severe malnutrition in Leer [Unity State], and 1,000 in Bentiu [Unity State], but for famine to be declared, it has to affect over 20 percent of the population,” Sue Lautze, head of the Food and Agriculture Organization (FAO) in South Sudan, told IRIN. 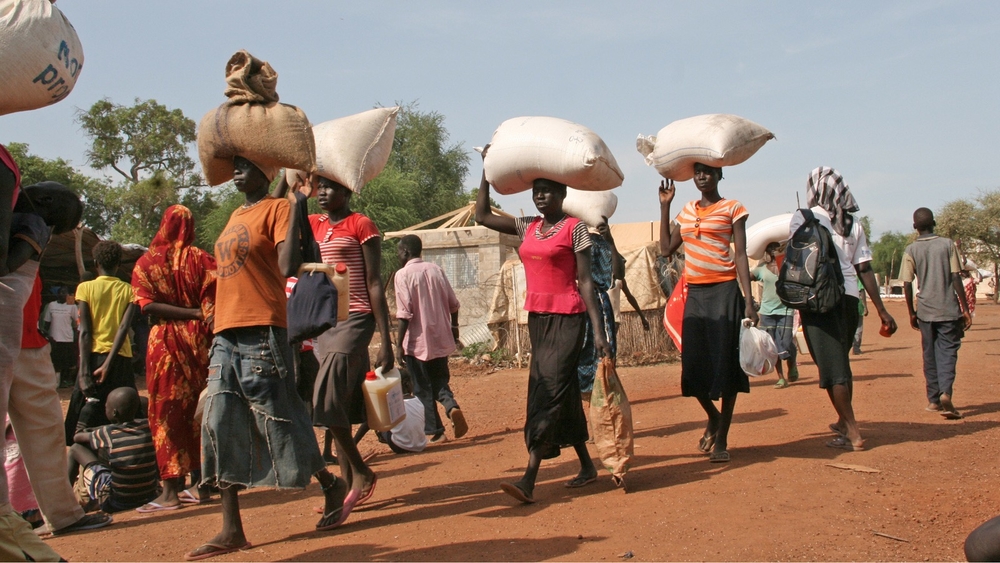 IPC also categorizes acute (phase 3) and emergency levels (phase 4) of food insecurity. For an acute crisis, at least 20 percent of people must have significant food shortages and there must be above normal acute levels of malnutrition. For emergency levels, there must be high levels of acute malnutrition and at least 20 percent of people must have extreme food shortages.
As it stands, more than 3.5 million people are in IPC Phase 3, and “large portions of the population in conflict-affected areas face Emergency (IPC Phase 4),” according to FEWS NET. Within the next four months, famine could occur in parts of Jonglei and Unity States.

Children are usually the most vulnerable in situations of famine or emergency food insecurity. UNICEF has reported that 50,000 children are at risk of dying of malnutrition throughout 2014, and hospitals, internally displaced persons (IDPs), shelters and communities are already reporting high numbers of sick children.

In Bentiu’s UN Protection of Civilians (POC) site, aid agencies warn that malnutrition-induced child mortality is reaching alarming levels, with up to four children dying per day from starvation and related complications.

Vanessa Cramond, health adviser for Médecins Sans Frontières (MSF), explained that children often contract multiple other infections alongside malnutrition, as a result of cramped and poor conditions in IDP camps. “Repeated infections often result in children developing malnutrition … Very often children are presenting to us very late, very sick and we do see very high levels of mortality in the first few days,” she told IRIN in Bentiu.

For example, two-year-old Thielyang was admitted to the MSF hospital in Bentiu with severe malnutrition in addition to tuberculosis. “It took weeks for her to regain her weight, but now she is doing better,” mother Angelina told IRIN.

Why is South Sudan inherently vulnerable to food insecurity?

South Sudan suffers from a chronic agricultural production deficit. Over 90 percent of South Sudan’s land is arable, but less 4 percent of that is farmed today. Most farmers are subsistence growers, and when they flee conflict, little is produced.

According to a FAO/WFP 2014 Crop and Food Security Assessment, subsistence farmers continue to rely largely on the market for their cereal requirements. Notable differences exist even within the 10 states of South Sudan, with households in Upper Nile State covering only 10-20 percent of their cereal needs from their own production, compared to 60-70 percent in Central Equatoria State.

The high costs of transport and poorly integrated markets also increase the cost of bringing in food to South Sudan. Most agricultural produce is imported from Uganda, and even in times of peace, there is a high reliance on transport through South Sudan’s river network.

But with towns like Bor, Malakal and Bentiu frequently changing hands between rebels and government forces, traders have been unwilling to take the risk of transporting goods north from the capital, Juba.

“We keep looking at the markets, we keep asking our teams what’s coming down the river, but there is nothing,” Sue Lautze, head of FAO in South Sudan and deputy humanitarian coordinator, told IRIN.

The current conflict will likely have long-term impacts on development aid, and foreign direct investment. Many agricultural development programmes have been put on hold due to insecurity and the need to channel resources to emergency response, and foreign investors have returned to their home countries.

Lautze explained that because of access difficulties to conflict-affected areas, aid agencies may be tempted to channel funding for development projects to more stable and often more prosperous countries. “You keep development going in the less affected states, while depriving the conflict-affected states globally. That is what happened during the 21-year conflict with Sudan,” she said.