Read about what we achieved.
PHNOM PENH

The planned construction of 88 hydroelectric dams in the lower Mekong basin by 2030 will cause food security challenges in Cambodia, experts say.

“Cambodia is going to pay the highest price for dam development basin-wide, to the point of affecting the food security of its 80 percent rural population,” Eric Baran, a specialist with the WorldFish Centre, an international research NGO based in Phnom Penh, told IRIN. “Worldwide, there is no bigger consumer of freshwater fish than Cambodia.”

By 2030, multi-national developers plan to construct 11 dams on the Mekong river mainstream, and 77 dams on its tributaries, in an effort to meet the growing demand for electricity in Cambodia, China, Laos, Myanmar, Thailand, and Vietnam.

Electricity demand is already intense, and growing. According to a 2010 hydropower assessment report commissioned by the Mekong River Commission (MRC) - an inter-governmental agency shared by Cambodia, Lao PDR, Thailand and Vietnam - Vietnam and Thailand account for the majority of electricity consumption today and will account for 96 percent of power demand in the Lower Mekong Basin (which consists of Laos, Thailand, Cambodia and Vietnam) by 2025.

With its fish-heavy diet, Cambodia will feel the crunch of the dams as water courses change and fish migration routes are blocked. Attempts to change agricultural practices and diets face major challenges in the fish-dependent country.

A 2013 study led by Cambodia’s Ministry of Fisheries showed that Cambodians eat on average 173 grams of fish per day; the world’s average is five grams. Consumption could drop to 80g per person per day by 2030, the report argued, due to the construction of the dams.

The Cambodian Fisheries Administration acknowledges that due to mainstream dam development alone, the country could lose up to 42 percent of its freshwater fish by 2030 compared to the national yield in 2000 - a drastic dip in a country where nearly a fifth of the population, according to government data, lives below the food poverty line of 70,000 riels (US$17) per month.

Activists say the impact of the planned dams will be felt strongly in northeast Cambodia’s Tonle Sap Lake, the largest lake in Southeast Asia and home to the most productive inland fishery in the world.

Tonle Sap yields around 300,000 tons of fish per year - more than 40 percent annual national production - and underpins the local economy. According to WorldFish, 1.5 million people make 95 percent of their income directly from the lake.

“The lake’s fish do not only feed those around it. We estimate that six million people depend on it for employment [as fishermen and fish sellers] as well,” explained Youk Senglong, a programme manager for the Fisheries Action Coalition Team (FACT), an NGO based in Phnom Penh.

According to the 2010 MRC assessment, at least 39 percent of the fish caught in the Mekong Basin are migratory, amounting to up to 34 tons caught per hour during the annual migration peak (June to October) in the Tonle Sap river alone.

Dried fish for sail in a Phnom Penh market. Cambodians rely heavily on fish for their daily protein intake. 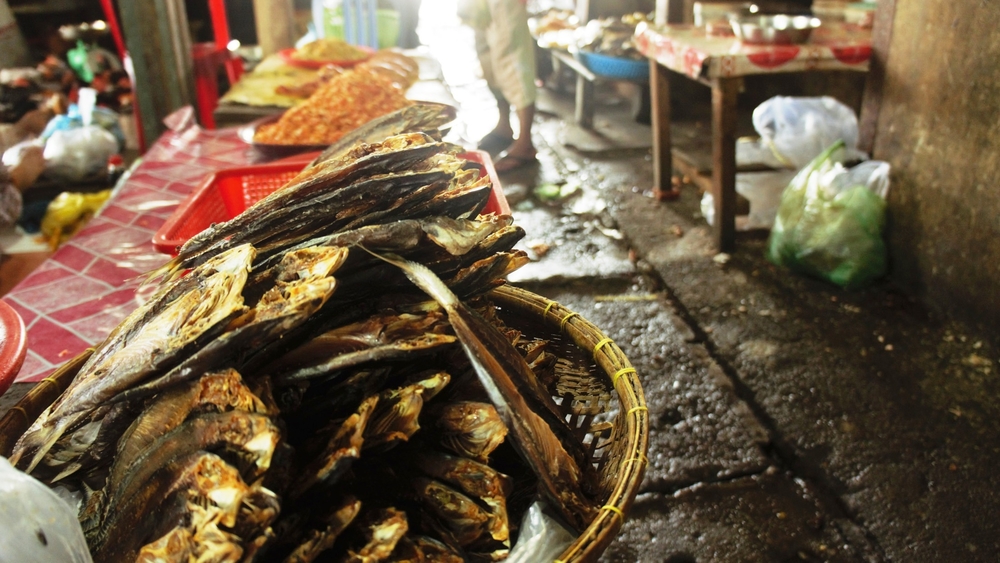 When the Mekong runs low, the Tonle Sap acts as tributary, meaning water flows from the lake and river into the Mekong. When the Mekong floods, the flow reverses. Adding a dam in this situation creates a physical obstacle to fish trying to migrate in either direction.

“Any migration blockage affecting the Mekong will affect the activity on the lake,” Senglong explained. “It will also have impact elsewhere in Cambodia simply because of the [changes in] water flow,” he added.

Making up the shortfall

Hiroyuki Konuma, the UN Food and Agriculture Organization’s (FAO) regional representative for Asia and the Pacific, told IRIN from Bangkok: “Even if just one of the proposed dams is built across the Mekong it is unlikely that Cambodia would be able any time soon to make up fish losses.”

In Cambodia, fish and fish products are consumed more frequently than any other protein-rich foods such as beef, pork or poultry.

According to Edith Heines, the UN World Food Programme’s (WFP) country director for Cambodia, there is a need for behaviour change with regards to diet.

“The reduction of fish stocks due to the construction of the dams could have serious implications on the health, and specifically on the well-being of malnourished children under five,” Heines argued. “A significant change in eating habits needs to be factored into the country’s future plans to compensate for fish stock decrease,” she said.

However, others warn, compensating for a shift in diet would increase the demand for land and water for food cultivation.

Stuart Orr, freshwater manager at World Wildlife Fund International, explained that the poorest people will not be able to simply shift to different agriculture practices without reallocating water, building infrastructure, or exploiting other water sources.

“Finding the water is going to be costly, difficult and require trade-offs,” he said. In recent years, some government officials have argued that dams will create a cash windfall and open the doors to rapid economic and agricultural development.

However, Orr warned: “So far, there is no guarantee that the money generated by the dams will go to agricultural development unless there is political will.”?

Other potential methods, such as aquaculture or rice field fisheries (created when fish are introduced into flooded rice paddies to feed on the larvae of pests, fertilizing the soil and contributing to both the rice yield and fish productivity) could be scaled up to compensate for fishery losses. However, some say popular strategies might overlook the rural poor.

According to the World Bank, aquaculture is likely to dominate future global fish supply post-2030. But in Cambodia, its production is still low compared to that of freshwater captured fish - 58,000 versus 404,000 tons respectively in 2010. According to the MRC: “there is no substantial aquaculture sector in the Cambodian part of the [lower Mekong basin aquaculture] system.”

“Aquaculture tends to produce high value fish for trade, which does not contribute to food security among rural people, and most fishermen and farmers do not have enough capital to become aquaculturists,” explained Baran of WorldFish.

Nina Brandstrup, the FAO representative in Cambodia, explained: “[rice field fish] production could have a large impact in terms of production to make up for the fish losses.”

The Fisheries Administration plans to increase rice field fishery production by 15 percent per year and create 1,200 fish refuges, or bodies of water where fishing activity is forbidden in order to allow species to reproduce and recuperate and ultimately contribute to their conservation, in the country by 2019.