On 16 January, the Democratic Republic of Congo’s (DRC) army (FARDC) launched an operation in the eastern Kivu region of Beni to neutralize the Islamic Alliance of Democratic Forces (ADF-NALU) militia, whose prominence has been growing amid fears of its links with global terrorist movements. The FARDC offensive, dubbed ‘Sokola’, meaning to “clean out” in the Lingala language, follows the successful November routing out of the M23 militia after a joint UN-FARDC exercise.

“The ADF is not strong like M23. They don’t enjoy foreign support like M23 did. We are going to defeat them. They must heed the directive by President Kabila for them to disarm and participate in DDR [disarmament, demobilization and reintegration]. Otherwise, if they don’t, they are going to face the consequences,” Lambert Mende, the DRC government spokesperson, told IRIN.

In this briefing, IRIN offers insight into the ADF-NALU, examines the threat they pose and highlights analysts’ thoughts on how tackle them.

Who are the ADF-NALU?

ADF-NALU comprises some 800-1,400 combatants, without including the women and children in its ranks. Based in the northwestern Rwenzori Mountain region, along the border with Uganda, the militia is a “tightly controlled organization”, subsisting on illegal logging and gold mining as well as a “network of car and motorcycle taxis operating between Butembo, Beni and Oicha”, and “money transfers from London, Kenya and Uganda, which are collected through Congolese intermediaries in Beni and Butembo”, according to a UN Group of Experts report. Butembo, Beni and Oicha are in North Kivu Province.

The group arrived from Uganda in 1995. Attempts at neutralizing ADF-NALU in 2005 and in 2010 were unsuccessful. “This Congolese-Ugandan armed group has shown remarkable resilience attributable to its geostrategic position, its successful integration into the cross-border economy and corruption in the security forces,” explained the International Crisis Group (ICG) in a 2012 report.

ADF-NALU has several training camps in eastern DRC and equipment such as mortars, machine guns and rocket-propelled grenades, according to the UN experts report. The militia has been boosting its numbers through recruitment and kidnappings. Between July 2010 and November 2013, Beni’s civil society registered 660 abductions by ADF-NALU, 382 of which occurred in 2013 alone. Recently, MONUSCO helicopters on a reconnaissance mission were shot at by the militia, civil society alleged.

What threat does ADF-NALU pose?

Besides its growing military strength, ADF-NALU is seen as a potentially destabilizing force in the larger Great Lakes sub-region due to its suspected radical Islamist links. The Ugandan government has long claimed that the group has connections to Al-Qaeda and the Somali militant group Al-Shabab. 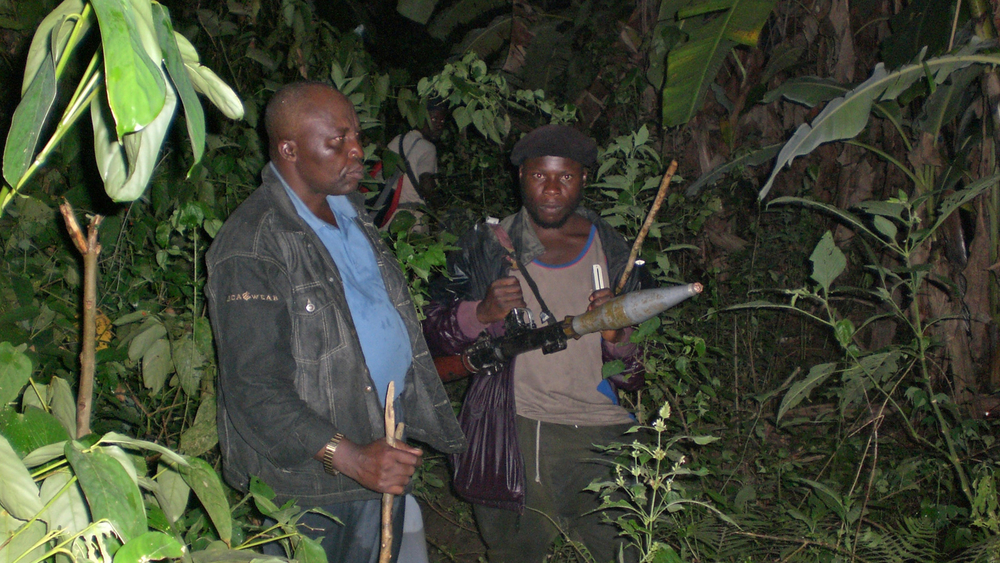 In an Al Jazeera opinion piece, journalist Caroline Hellyer notes that while “the majority of Muslims in Congo and Uganda are not politicized… the ADF-NALU leadership who are located in the UK, Congo, Kenya and Sudan are adherents of a particularly radicalized Tablighi Islamic ideology that caused them to clash with other Tablighis in Kampala.” Indeed, the militia has cells beyond Uganda and DRC, and previous attempts at amnesty and disarmament talks have stalled due to an inability to get their various leaderships together, adds the blog Digitaldjeli, which is hosted by Hellyer.

The militia draws its membership from countries such as Uganda, Tanzania and Somalia, according to a senior officer with the UN Mission in the DRC (MONUSCO), who cited the insecurity in Somalia and the late 2013 terror attack in Kenya. “We cannot afford to let them grow without risking destabilizing the region,” warned the officer.

ADF-NALU’s leader Jamil Mukulu, a Christian convert to Islam, has been targeted by UN sanctions since 2011.

"Too many militaries, especially the FARDC, will come in, handle fighting, declare their victory and go home. At this point the rebels move back in again... and the villagers are punished as a whole"

Indeed, ADF-NALU is a hybrid group, not only due to its members’ mixed origins but also because they are the product of about 20 years of cross-border living, operating as guerrillas and often blurring the lines between the criminal, the rebel, the citizen, the soldier and the state, adds Digitaldjeli.

The militia is also on the move. In December 2013, a lot of east-to-west movement was witnessed, with ADF-NALU dependants - women and children - moving with guards and hiding among the local population, said Teddy Kataliko, a civil society leader in Beni. Militia movements towards Ituri, Orientale Province’s capital, were also recorded.

ADF-NALU could also resort to asymmetrical attacks, ambushing soft targets, as they have good intelligence within the population, “and they know where and when to find this or that person”, said the MONUSCO officer.

In July 2013, ADF-NALU engaged in a looting campaign in the area of Kamango, a town in North Kivu close to the Ugandan border, stealing from the general hospital, health centres and pharmacies to boost supplies in preparation for attacks, noted Kataliko. Moreover, while thousands of rebels, from various groups, in eastern DRC surrendered after M23’s defeat, almost none from ADF-NALU did, according to the UN.

On 2 January, Col Mamadou Ndala, a popular and well-respected officer who led FARDC’s successful offensive against the M23 rebellion and went on to take charge of the operation against ADF-NALU, was killed in an ambush on the road between Boikene and Mavivi in North Kivu province.

“With the death of Mamadou [Ndala], the hunt against armed groups is threatened, and with it, peace in eastern DRC,” said Fidel Bafilemba, a researcher with the Enough Project.

DRC Government spokesman Lambert Mende at first blamed ADF-NALU for the killing, which was carried out using a rocket propelled grenade. He later announced that several army officers had been arrested in connection with the killing, among them the army commander in Beni, Lt Titu Bizuru.

In a detailed analysis of the ambush published in Jeune Afrique, military analyst Laurent Touchard said the evidence was inconclusive.

“Even if the theory of an internal settling of scores within FARDC appears most likely, the possibility that ADF-NALU, or M23 dissidents were involved should not be totally discounted. They are not mutually exclusive: is the hypothesis of rebels somehow manipulated and helped by senior figures in FARDC totally absurd?”

Jamil Mukulu, the ADF leader and his top commander in the bush camp in thier camp in eastern DRC (file photo) 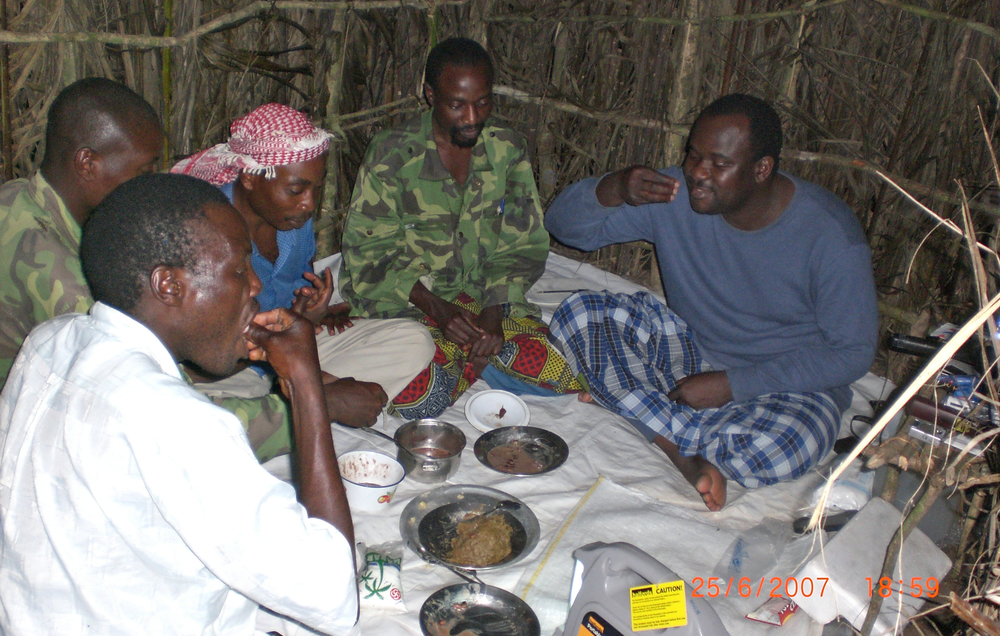 “That is where the only certainty in this affair lies: those who killed Mamadou Ndala benefited from accomplices within the security forces,” he added.

Mamadou was posthumously promoted to general.

How should ADF-NALU be tackled?

According to the ICG, “before considering any further military action against the ADF -NALU, it would be wise to separate fiction from fact and instead pursue a course of weakening its socio-economic base while at the same time offering a demobilization and reintegration programme to its combatants.”

Journalist Darren Olivier concurs, noting in Hellyer’s Al Jazeera piece that the group’s strong community and foreign connections, warlord backing, and alliances with other militias in the region mean a clear counterinsurgency strategy will be vital: "The question is how do you get this population on your side.”

ADF-NALU collaborates with various local armed groups and is especially well integrated within the Muslim population.

Islam’s role in peace building in the DRC must be recognized, adds the Digitaldjeli blog. “Indeed, only since the assassination of Colonel Mamadou have many people become aware that Congo’s national hero was a Muslim. This is another reason why he was the perfect man for the job of tackling the ADF-NALU and why his death is a massive blow to the wider community of Beni, particularly the large Muslim community.”

With ADF-NALU accused of enticing young people with gifts such as new bicycles and cash in an impoverished region whose residents feel neglected by Kinshasa, the sustained presence of the state in the group’s strongholds is necessary, say analysts. “Too many militaries, especially the FARDC, will come in, handle fighting, declare their victory and go home. At this point the rebels move back in again... and the villagers are punished as a whole," noted Olivier.

According to Josaphat Musamba Bussy, a Bukavu-based researcher, any military strategy must combine both air and ground forces using specialized commandos. But initially, added Bussy, FARDC should identify ADF-NALU’s Congolese networks, and infiltrate and stop them with the help of local and Ugandan intelligence services.

What has been the progress so far?

FARDC claims to have dislodged ADF-NALU from several locations. According to a MONUSCO officer, the army had successfully taken over the Mwalika camp, where an important ADF-NALU training site is located. MONUSCO is supporting the army logistically and with intelligence.

“The operation against ADF-NALU is going on very well. They are escaping their headquarters [in Mamundioma] near Beni. They are moving to Orientale Province [in the northeast]. We are organized, moving forward and ready to stop them,” said Mende, the DRC government spokesperson.

But there are fears of civilian casualties. Commenting on the fate of ADF-NALU collaborators, a FARDC army major stated, “Those who are with them are considered enemies.”

“We are providing and sharing intelligence information with our Congolese counterparts for the demise of ADF-NALU,” Gen Edward Katumba Wamala, Uganda’s Chief of Defence Forces, told IRIN. “We have deployed troops in our borders to ensure no ADF-NALU escapees enter or cross into our country. Our personnel will capture the fleeing rebels.”

The Ugandan government says that it is ready for dialogue. “We have always had our doors open. We have never seen the ADF-NALU. If they want to talk to us, we are always here,” Crispus Kiyonga, Uganda’s Minister for Defence, told IRIN. In July 2013, Kiyonga told Uganda’s parliament that the government agrees, “in principle”, to initiate talks with ADF-NALU if the group so wishes.