Read about what we achieved.
GAZA

Hamdi Al Shami, 54, woke up in the highly populated Zeitoun area of Gaza City, on 11 December, to find raw sewage flowing down his street at a height of more than 2m. It was just one of several sewage overflows to occur in his neighbourhood over the last five weeks.

On 13 November, more than 35,000 cubic metres of raw sewage overflowed when the Zeitoun pumping station failed, affecting 3,000 nearby residents. Just as the mess was being cleaned up, the area was again inundated - this time with approximately twice as much waste - when heavy rains fell over the Gaza Strip between 11 and 15 December. In Gaza City, one of the worst-hit areas, the municipality estimated that hundreds of thousands of cubic metres of sewage and rainwater overflowed from pumping stations and manholes, flooding streets and homes.

“It was horrible. We lost many things when the sewage came from everywhere around us - the doors, manholes and sinks. This cannot be forgotten,” said Al Shami, speaking about November’s flooding.

That flooding was attributed to a combination of factors: power outages disrupting the city’s sewage pumps and a shortage in capacity, spare parts and facilities because of a seven-year blockade against Gaza. At the time, residents were told that a rapidly established power connection to the Israeli grid would prevent future problems. But with the recent rainfall, the situation in Al Shami’s neighbourhood has only worsened. He was stranded amid water and sewage for days.

“It hit us again, but harder this time," Al Shami said on 12 December. "With every passing hour, the water level was rising. It was incredible. We called rescue teams to help us before it is too late.

"It was not only the electricity issue; we were also cut off from basic needs and clean water," he added.

With power outages and pump shortages, the Municipality of Gaza estimated it would take up to two weeks to drain the water and clean the sewage off the streets. It has brought in water pumps from other areas and expanded the artificial pond at Nafaq St. to speed up the process.

According to the UN Office for Coordination of Humanitarian Affairs (OCHA), the flooding affected 21,000 people, including thousands who were displaced and sought shelter for days in schools or with relatives. Two people died and 108 were injured, mainly in southern Gaza, OCHA said, in the worst storm the Middle East has seen in decades.

In recent days, people have gradually been returning to their damaged homes, but the storm has exacerbated pre-existing water, sanitation and hygiene (WASH) concerns caused by fuel and electricity shortages.

“Subsequently, recent flooding has had impacts on environment, health and economy in Gaza. For example, rain water mixed continuously with sewage water, and a possible sanitation issue is raised because of that," Yaqubi said.

Aid agencies are assessing the needs and appealing to donors for support.

Among the most immediate needs, according to the Coastal Municipalities Water Utility (CMWU) and the Municipality of Gaza, are mobile water pumps and power generators - a number of which were damaged during last week’s storm - in addition to fuel and spare parts for repairs and maintenance. There is also a long-term need for expanded and more developed water facilities.

This year’s Consolidated Appeals Process for humanitarian support is funded at around 63 percent ($252 million has been received of a total request of $401 million), with the WASH sector notably underfunded, at around 31 percent of targeted funds.

Living on a street next to the local sewage pumping station had not been in problem for Al Shami until last month, when an acute shortage of electricity in the Gaza Strip - caused by the closure of Gaza’s only power plant - pushed the territory’s 291 water and sewage treatment facilities onto backup generators. Sewage overflows have since been reported in several areas, and risks of overflow were high in others.

OCHA called the situation “one the most serious energy crises in recent years, with potentially serious humanitarian ramifications”.

Human Rights Watch said the fuel shortages and subsequent power cuts in Gaza were increasing “the risk of a massive public health crisis”.

After Egyptian authorities closed down most of the tunnels that had allowed the smuggling of cheap fuel into Gaza - part of a clampdown on militant activity in Sinai - the power plant struggled to obtain fuel at an affordable price. It closed on 1 November and reopened 45 days later after donor funding. The running costs of private generators also shot up.

Some fuel continues to enter Gaza through the remaining tunnels, but estimates in November put the figure at less than 20,000 litres per week, down from nearly a million litres per day prior to June.

Power cuts over the last seven weeks have regularly lasted 12 to 16 hours each day, leaving many of Gaza’s 1.7 million residents without access to basic clean water, sanitation and hygiene, say aid agencies and human rights groups.

In addition to overflowing in the streets, sewage is being dumped into the sea in far greater quantities than before, and in lagoons and open channels. (Even before the power crisis, 90 million litres of raw or partially treated sewage was being dumped in the sea daily.)

The Turkish government agreed at the end of November to donate US$850,000 to pay for four months’ worth of fuel to run hospital and water treatment plant generators, but that has not yet succeeded in stopping the sewage overflows, which have been aggravated by heavy rains.

In response to the recent storm, Qatar donated $10 million for the fuel needed to operate the power plant for one month, allowing it to re-open in mid-December. The plant has been gradually returning to its standard schedule, which, under normal circumstances, includes an eight-hour cut that shifts from area to area.

The health risks are a concern to Ashraf Bargout, also a resident of Gaza City’s Zeitoun area, who has seen his children fall into the dirty water several times. He is struggling to clean it up. 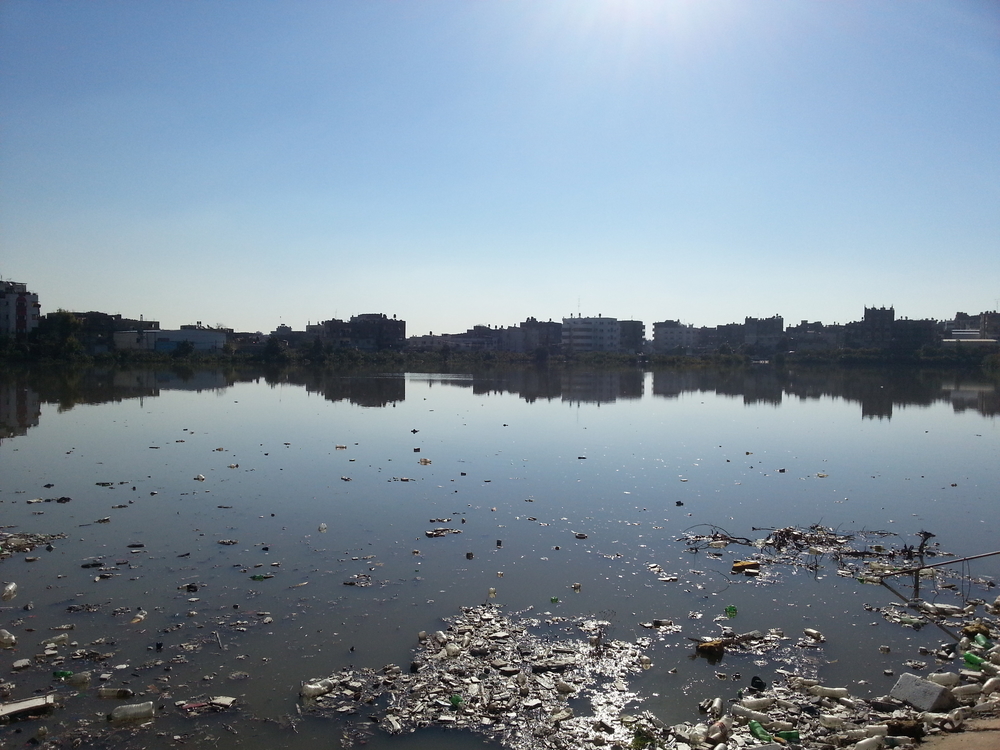 “Why does no one answer our calls to solve this issue once and for all? We don’t want to see our houses flooded, or our children drowning or becoming sick,” Bargout told IRIN.

When the sewage flows down the streets, he sends his children away to stay with relatives.

“Does the world wait for a catastrophe to happen before moving? We fear the worst for our families. Look around and see how our children can live or survive, or how our life can be normal, with a flood.”

CMWU urged the international community to support efforts to help Gazans during winter. Staff say they are trying to fix broken equipment but that spare parts are hard to come by because of the difficulty of moving goods from Israel into Gaza. They have started distributing some fuel to municipalities to run the most important services.

Tony Blair, representative of the Middle East Quartet of peace mediators, called for prompt actions to find a lasting solution. He encouraged the Israeli government to reopen crossings into Gaza and allow the movement of goods and people to rehabilitate its economy.

“The impact of the storm has increased the urgency for immediate intervention in order to avoid a humanitarian catastrophe in the Strip, and has again illustrated the need for a more lasting solution to the problems facing the people there,” he said.

And the situation could yet worsen.

"It is the beginning of the season and more waves are expected to come. We need an urgent action to avoid further issues," Yaqubi, of the Palestinian Water Authority, told IRIN.

A strategic vision should be developed to deal with such situations, he said, including storm-water harvesting projects, such as digging roadside wells and creating collection ponds that would store extra water for the aquifer, in addition to continuously maintaining and cleaning the drainage system.

“Sewage is not our only problem,” said Bargout. “Our house receives water for just a few hours every two to three days. How ironic is that? While we’re waiting for water from the tap, we receive the sewage water from the sink and everywhere.”

Before the storm, due to the power crisis, only 15 percent of Gaza’s population received water for domestic use daily. Twenty percent received it every two days, 25 percent every four days, and 40 percent every three days. When the water comes on, it is generally just for five to six hours.

The 25 small-scale desalination units used to provide water to around 160,000 Palestinians in Gaza are also affected by the fuel shortages; as a result their production dropped by 75 percent.

Water is a delicate issue in Gaza, which has seen increasing pollution of the main aquifer through waste water and sea water intrusion.

The Palestinian NGOs Network (PNGO) and local human rights organizations in Gaza blame the Israeli blockade policies, and also Palestinian authorities: “Both governments in Ramallah and Gaza have failed to take any effective steps to overcome this crisis and its consequences, and accordingly all daily basic services needed by the population have disastrously deteriorated,” said the PNGO.

Amnesty International demanded Israel immediately lift its blockade on the Gaza Strip to allow the delivery of fuel and other essential supplies into the territory without restrictions.

“Since June 2007, when the Israeli blockade was tightened, Gaza’s energy, water and sanitation infrastructure has been inadequate to fulfil the basic rights of its inhabitants. They were already poor due to prior Israeli restrictions and decades of neglect,” the organization said.

It also called on the Egyptian authorities to facilitate the construction of new power lines to increase the electricity supply to the southern Gaza Strip. It said Palestinian and Israeli authorities must work together to find a sustainable solution to the fuel crisis.

Meanwhile, Al Shami says he is undertaking additional precautions to prevent further flooding into his house.

“No one knows what will happen later,” he said.