With more than half of all human infections originating in animals,
experts say a multi-sectoral, global response to zoonoses - diseases
passing between animals and humans - is urgently needed. IRIN talked to a
panel of experts to learn just how deadly humans and animals can be to
one another, and ultimately how each can save the other.

“By neglecting the health of animals and ecosystems, we fail to
recognize that human health is inextricably linked with animal and
ecosystem health,” said Laura H. Kahn, a physician and researcher at
Princeton University in the US. Khan co-founded the One Health Initiative, which links human
health to how well animals and the ecosystem fare.

With almost half of the some 1,000 pathogen species found in livestock
and animals kept as pets able to cross over into humans, poor animal health undoubtedly increases the risk of poor human
health, experts warn.

But then there are the unknown viruses, which are estimated to number at
least 320,000, according to calculations by Simon Anthony and
co-researchers published in 2013.

A good part of zoonoses (some 70 percent of which come from wildlife)
are directly attributable to human actions that have vastly changed
animal environments, decreasing animals’ resilience against infection
and boosting the risk of humans falling ill.

“Changes in farming and marketing systems have led to more and more
pathogens present in society that human beings have never previously
been exposed to,” Yi Guan, the medical doctor and virologist based in
Hong Kong who first traced the 2003 outbreak of Severe Acute Respiratory Syndrome (SARS) to live poultry markets in eastern China, told IRIN.

The planet’s population is expected to exceed nine billion people by
2050, leading to more pressure on environmental resources and food
systems. By that time, the UN Food and Agriculture Organization (FAO)
estimates global meat consumption per person will increase 27 percent
(with most of that growth in China and Brazil).

“Urbanization is [linked] to the intensification of animal systems [in
cities], leading to an increased risk of zoonosis,” said Fred Unger, a
veterinary scientist with ILRI.

From the 1960s until 2010, due to urbanization, especially in developing
countries, FAO calculated the global consumption of milk doubled, while
that of meat tripled and eggs grew fivefold.

“There are direct impacts and consequences of the change in the farming
and marketing systems,” said Yi. “These also provide increased
opportunities and chances for human and animal interaction.”

While there are health benefits to moving animal husbandry into cities
and slums, there are also zoonotic pathogens brewing in the unhealthy
physical conditions animals are kept in, increasing humans’ exposure to those pathogens.

But it is not just people casting a wary eye at animals; animals would be justified in being suspicious of us.

“Increased human disturbance and habitat loss cause elevated levels of
stress in many animals. This reduces their immune function and causes
diseases [in animals] to become more prevalent,” said Tombak.

The Nipah virus - a potentially fatal disease with respiratory symptoms that can
infect the brain - emerged in Malaysia the late 1990s, when people
destroyed massive sections of rainforest, the natural habitat of fruit
bats, in order to build pig farms and cultivate fruit orchards.

Researchers theorize that as bats, carriers of the virus, came into
closer contact for the first time with densely populated pig farms, they
infected a number of pigs, which then infected humans.

On average, some 75 percent of people infected died.

Yet, cross-infection can be prevented in these cases, said Tombak. Camps
for extractive industries based in forested areas can install screens
to prevent bats from roosting indoors and establish responsible waste
disposal practices to prevent attracting wild animals to camps, she
suggested.

Even when people and animals are not fearful of one another, there is a common potential enemy - warming temperatures.

Even with the “pastoralist dropouts” heading to cities, some 40 percent of Mongolia’s three-million population (about 150,000 households) still survive from herding. Dagva Manaljav, 38, from Kharkhorin District in Mongolia’s Övörkhangai Province 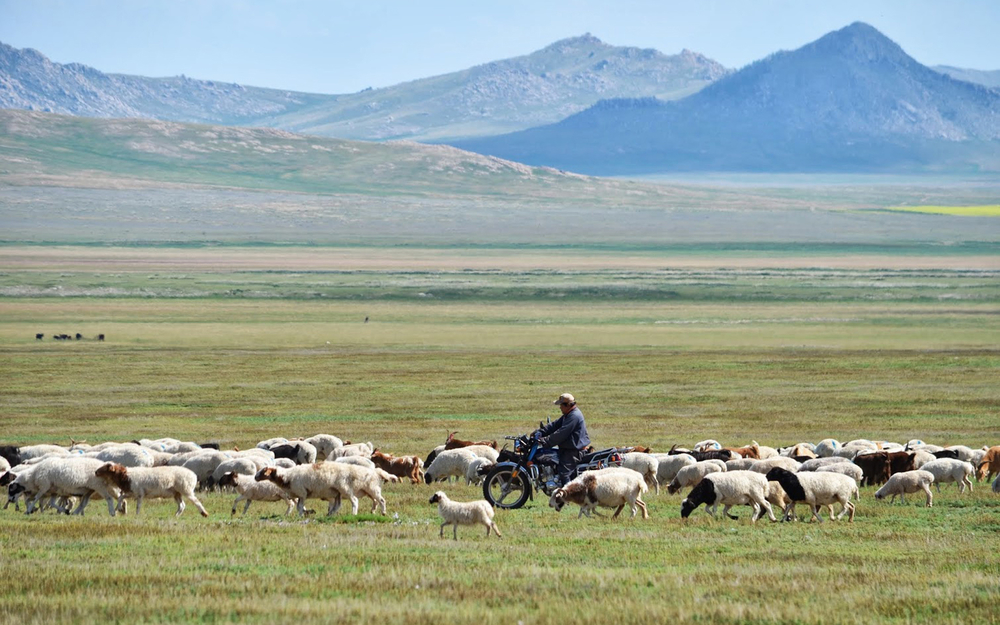 Edward Allen, a research scientist at the Laos Institute for Renewable
Energy, based in Vientiane, has noted that even moderate temperature
dips and rises within 10 degrees Celsius can lead to more deaths in both
groups.

These temperature changes kill thousands of animals annually, and can
damage surviving animals’ fertility and milk production - affecting
human nutrition - according to FAO.

Half the world’s surface area has some type of disease surveillance, but
most national programmes are based in places with the least number of
outbreaks, according to the UK medical journal The Lancet. The journal noted in 2012 that countries with high wildlife
biodiversity and population density are “hotspots for emerging
infectious disease”, yet almost none of the major surveillance systems
were based in these lower-latitude regions.

In an oft-cited meta-study published in 2008 in the journal Nature, Kate
Jones
and co-researchers recommended “re-allocation of resources for ‘smart
surveillance’”.

Between 1996 and 2009, more than half of all emerging infectious disease
outbreaks were in Africa - a continent that lags behind in early
warning systems and disease surveillance - according to a 2012 report by
the UK-based Royal Society of Biological Sciences.

And even where there is adequate surveillance, politics - including
powerful agriculture lobbies - can prevent zoonoses from being
identified and rapidly treated, said Kahn of the One Health Initiative.

When Q fever, an
infectious disease causing stillbirths and miscarriages in sheep, cattle
and goats, broke out in the Netherlands between 2007 and 2009, “the
Dutch Ministries of Agriculture and Health were at odds with each other,
hindering an effective response,” said Kahn, explaining that the
Ministry of Agriculture initially denied the livestock origins of the
disease, which eventually spread to more than 2,000 people, killing
about 1 percent, by 2009. The initial denial, which lasted until June
2008, of Q fever's origins meant “nothing was done to prevent further
outbreaks... The disease continued to spread,” said Kahn.

In 2000, the prevalence of fully immunized nomadic pastoralist children
and women in eastern Chad’s Chari-Baguirmi and Kanem regions was near
zero. In the same nomadic camps, however, livestock were compulsorily
vaccinated by circulating veterinary teams.

Chad’s Ministries of Livestock and Health decided to join forces to
carry out vaccination campaigns for pastoralists and their animals, resulting, for
the first time, in 10 percent of nomadic children under the age of one
being fully immunized wherever the joint campaign was conducted.

But while calls for such joint campaigns, which cut costs while reaching
more people and livestock, have been proposed by FAO and the World
Health Organization (WHO) for at least two decades, experts say there is
still not enough collaboration.

Part of the problem is academic “silos”, said disease ecologist Peter
Daszak, who heads the New York-based EcoHealth Alliance, at a recent
standing-room-only session on One Health at the American Society of Tropical Medicine and Health annual conference held in Washington, DC.

“Working with animals - that’s the easy part. But for human experts, we
need to create a dictionary just for each side to understand one
another,” he wryly noted.

“Nobody has the knowledge and expertise to do everything from beginning
to end [of disease identification and containment],” added Yi.