Shelter for displaced people is fast emerging as a key priority after more than one million homes were damaged or destroyed when Typhoon Haiyan struck the central Philippines a month ago. With sustained winds of 235 km/h and gusts of 275 km/h, the storm, locally known as Yolanda, was among the strongest storms ever recorded.

More than five million typhoon survivors are in need of immediate shelter assistance since the typhoon made landfall on the morning of 8 November in the town of Guiuan in Eastern Samar Province, leaving behind a path of destruction across nine provinces.

“I don’t know how we will rebuild. We’ve lost everything,” Elsa Raganas, 43, a single mother of four, told IRIN outside the ruins of her home in the coastal town of Palo in Leyte Province, where over 15,000 houses were destroyed. Most rural homes are constructed of lightweight wood and tin sheeting, making them highly susceptible to wind, though many stone and concrete structures in towns and cities, like Elsa’s, were also levelled.

Both urban and rural areas experienced widespread devastation, with as much as 90 percent of housing destroyed in some locations. Up to 30mm of rain per hour pummelled the Guiuan area, while storm surges up to six metres high were reported on Leyte and Samar islands.

According to the National Disaster Risk Reduction and Management Council (NDRRMC), over 14 million people were affected, more than 4 million were displaced, and over 5,700 lost their lives.

More than 94,000 survivors are living in 385 overcrowded evacuation centres, often in dire conditions, while the rest are staying with family and friends, the NDRRMC reported on 6 December.

Others are still living outdoors under makeshift shelters they have built themselves, using plastic sheeting, plywood and material from the remains of their homes. “We don’t have any choice,” said Alberta Hijanda, 55, who lives just down the street from Elsa and sleeps with 12 other family members under a single tarpaulin to protect themselves from the weather. “We desperately need help.”

Of the more than one million homes affected; 515,179 were totally destroyed and 551,546 were partially damaged, said a recently released Multi-Cluster/Sector Rapid Assessment (MIRA), a cooperative survey involving more than 40 agencies across the affected area, including 92 municipalities. 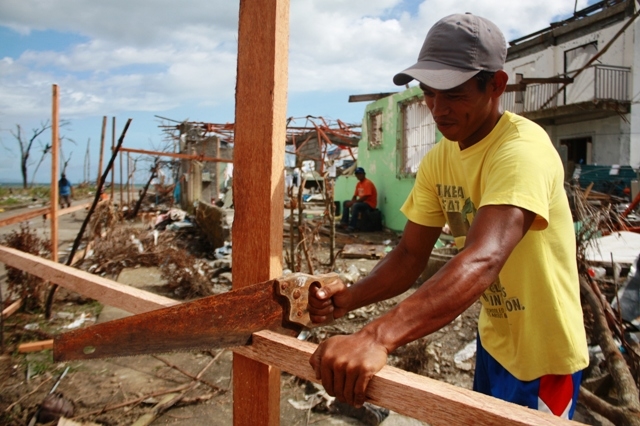 People urgently need support to repair or reconstruct their houses, or build makeshift shelter on their plot of land, which they also need to clear of debris and rubble, the assessment noted.

In Samar, Northern Leyte, Northern Cebu, Northern Panay and Coron, more than 85 percent of houses were affected - between 55 and 67 percent of households experienced total destruction of their houses, while an additional 25 to 36 percent were partially damaged.

“Without doubt, shelter must be the number-one priority now,” Leopoldo Dominque Petilla, the governor of Leyte Province, told IRIN. In his province alone, more than 170,000 homes, where over 1.9 million people lived, were damaged or destroyed.

Addressing the need for shelter will prove a monumental task, not just for the government, but also for the international community working to assist people in need of help. “Shelter will ultimately be the biggest challenge,” Anna Pont, shelter cluster coordinator for the Philippines, who is co-ordinating some 40 local and international agencies, told IRIN in Manila.

Provisionally, the government has requested international shelter assistance for 500,000 families, with an emphasis on people whose homes were totally destroyed. The rest would be covered by the government, local civil society, church groups, and self-recovery methods.

Many affected families are already moving towards self-recovery in re-establishing their homes, but many others are still in urgent need of emergency shelter assistance, Pont said.

To date, cluster partners have delivered emergency shelter assistance (mainly tarpaulins and some fixings) to 46,000 households, with a further 110,000 to be assisted in the coming weeks.

Under the current Typhoon Haiyan Action Plan, various recovery interventions are being proposed to address the needs of 500,000 households, including the supply of materials for roofing and framing, salvaging wood and debris for re-use, labour, training in safer building practices, technical assistance, and cash provision solutions.

“The focus now needs to be on recovery and supporting people’s own initiatives,” Pont said. “We’re looking at maximizing salvaging what is possible... and then providing... material... so they have a decent roof over their heads, along with some technical assistance on how to build… [more safely],” Pont said.

Promoting self-recovery solutions that enable households to restore their homes in increments and enable owner-driven reconstruction is key, but local suppliers are struggling to handle the demand for building materials.

Nationwide, the Philippines can only produce 28,000 sheets a week of corrugated galvanised iron (CGI), the preferred roofing material, but the shelter cluster needs four million sheets over the next four months, which will have to be brought in. “That needs to be carefully balanced, so that we bring in a significant amount of CGI to support the reconstruction, but not so much that we destroy the local market,” Pont said.

One month after Typhoon Haiyan struck the central Philippines on 8 November, 2013, Alberta Hijanda, 55, a resident of Palo, has yet to receive the shelter assistance she needs. She currently shares living space with 12 other people under a single tarpauli 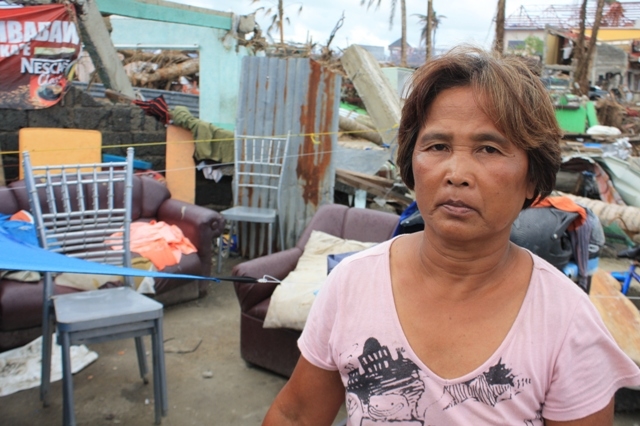 The cluster is currently advocating the provision of 10 CGI sheets per family, covering the core increment of shelter, and is requesting in-kind contributions of CGI, as local procurement won’t be possible.

Some policy issues are still being worked out by the government, particularly in the area of “hazard mapping”, which will restrict the rebuilding of homes in coastal areas deemed at high risk of a storm surge and could be designated as “no build”, so these people will need to be relocated.

Haiyan struck over a front hundreds of kilometres wide, affecting an area the size of Portugal. “Doing comparative assessments is particularly difficult across such a large area,” said Rachel Harvey, a response team member from Shelterbox International, a British-based emergency response charity working in southern Leyte Province and the islands of Batagan, Kinatarcan, and Hilantagaan.

Batagan Island was only affected by wind, while Tacloban and Palo were affected by wind and the storm surge. “Until you have a really good overview [of what is needed and where], it’s very difficult to make those calls,” Harvey said.

Under the $348 million Typhoon Haiyan Action Plan, which aims to cover the immediate humanitarian needs for the first six-month period, agencies are seeking $46 million for emergency shelter, of which just 37 percent has been pledged.

Shelter agencies are predicting a severe shortfall in roofing and framing materials unless donors quickly provide the necessary funding and material support. However, an updated humanitarian response plan to cover the next year is expected soon and looks set to make those amounts significantly higher.