This article is part of our in-depth coverage. Read more like this...
BOSSANGOA

Shocked by an escalation of killings, rapes and other abuses committed by Muslims against Christians, and vice versa, in the Central African Republic (CAR), leading clerics from both faiths recently travelled together to preach peace and listen to tales of horror.

The level of violence, lawless and impunity that prevails in CAR - where a "human catastrophe of epic proportions is unfolding", according to Amnesty International - is so great that Archbishop Dieudonne Nzapalainga and Oumar-Kobine Layama, the country's leading imam, had to travel under an armed escort.

The latest chapter in CAR's history of violence began in December 2012, when a coalition of predominantly Muslim rebel forces - known as Seleka - bolstered by mercenaries from neighbouring Chad and Sudan and convicts sprung from prison, advanced southwards, eventually toppling president Francois Bozizé in March.

In response to the rebellion and the wave of lawlessness that followed the official disbanding of Seleka in September, and in the absence of police or other state security forces, the largely Christian population in villages across the north formed self-defence units called anti-balaka ("anti-machete" in the Sango language.)

"Now we need to ask ourselves, do we want to push this country towards inter-confessional war, or should people work together and build this country? This is what leaders need to consider," said Nzapalainga in Bossangoa - 300 km north of the capital, Bangui - where some 36,000 people are seeking refuge in the grounds of the Catholic mission as well as in a school.

In all, some 400,000 people are displaced in CAR, most of them living in the bush with little access to clean water or humanitarian relief.

The country had "reached the worst of the worst" in every sense, he said.

"We've never seen people fleeing to a Catholic mission for safety, kids abandoning their schools in their masses, hospitals without medicines, or the Christian and Muslim populations turning against one another," he said.

The town's bishop, Nestor Aziagba, and Imam Layama both spoke of their fears of a genocide, a prospect also recently evoked by French Foreign Minister Laurent Fabius, senior UN officials as well as human rights activists.

"What I want to prevent is a war against brother and sisters who have been living side by side for many years," he said, admitting this was impossible without greater commitment from the new government led by Michel Djotodia, the country's first Muslim head of state. For his part, Djotodia has conceded he has little or no control of the former rebels.

"But unfortunately this government is not assuming its responsibilities," Aziagba said.

We've never seen people fleeing to a Catholic mission for safety, kids abandoning their schools in their masses, hospitals without medicines, or the Christian and Muslim populations turning against one another

Loyama appeared shocked by the level of destruction he had seen on the way to Bossangoa.

"What we have seen surpassed our understanding, as what we saw along the road is that there are really no towns anymore," he said.

"We, the religious leaders, are trying to do our part, but we ask the government to also do their part. It's not all the Christians that are anti-balaka, like we're hearing here, or that all the Muslims are Seleka, which is the perception," he added.

Among those seeking sanctuary in the Catholic mission is Lucie Blanche Feiganzanoli, who said Seleka forces came and razed her entire village of Bodili in September, murdering her husband, slashing other family members with a machete and killing five of her neighbours.

"I saw the Seleka take my husband. They bludgeoned him. They attacked his mother after that, and killed him," she said.

One aid worker, who requested anonymity for fear of reprisals, recounted a dizzying litany of abuses and killings collected from civilians over recent months.

"One woman came to give birth on the 10th of October. On the 11th, the Seleka came to the village and shot her dead." Another woman's husband "was put in a bag with a stone, tied up and thrown in the river the same day she gave birth".

Halima Bouba, from the village of Zere, is among 2,000 Muslims now living in Bossangoa. She says the self-defence units - reportedly backed by remnants of Bozizé's army - are no less vicious that the former rebels.

"The anti-balaka came and attacked our house at 5am. They caught my husband on the veranda and sliced him on the head, the side, the back with a machete as they held him," she said.

Bouba escaped with her four-year-old daughter and another child from a co-wife, but fears everyone else was caught and that none were spared.

"They beat a child until he died. He was 13," she said adding that she saw around 27 people killed and eight injured before running to hide in the bush.

A mother and child at Bossangoa's packed church grounds, where 36,000 people are squeezed into 19 hectares of land 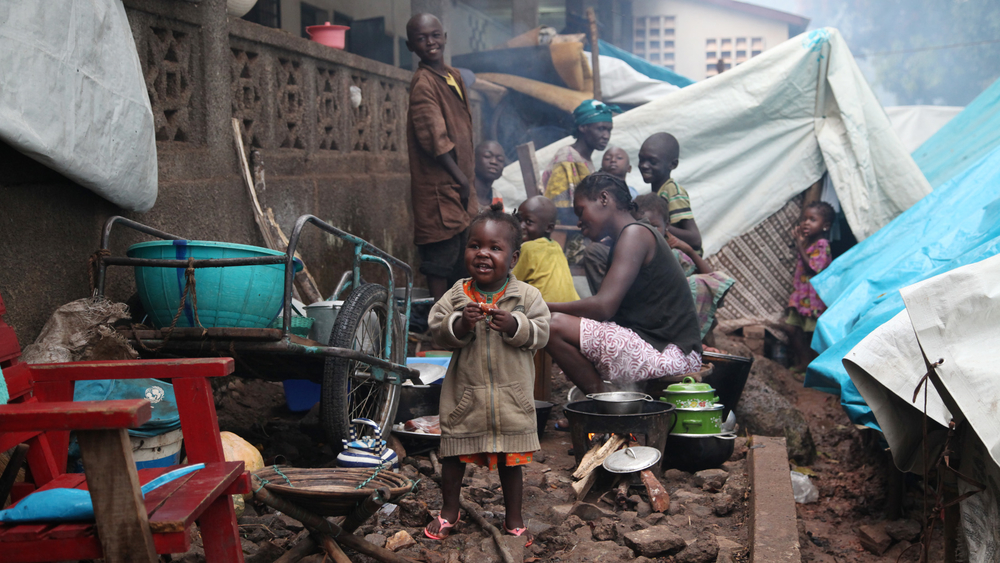 Halima Adamou, whose twin 20-year-old brother was one of seven Muslim men dragged off a bus and killed by anti-balaka, said she did not know if she could ever return to her village and trust her neighbours, even though "the Christians have all left their houses."

According to the aid worker, another Muslim woman "went to graze her cows, and on the road came across anti-balaka. They killed 20 people. She was the only survivor, but she was slashed with a machete."

In a recent report to the Security Council, UN Secretary-General Ban Ki-moon warned: "This cycle, if not addressed now, threatens to degenerate into a country-wide religious and ethnic divide, with the potential to spiral into an uncontrollable situation, including atrocity crimes, with serious national and regional implications."

Amy Martin, the head of the UN Office for the Coordination of Humanitarian Affairs in CAR, told IRIN: "My biggest fear is that this will come to Bangui."

General Babacar Gaye, the head of the UN Peacebuilding Office in CAR (BINUCA), said, "If nothing is done, there is a risk that a confrontation between ex-Seleka and spontaneous self-defence groups may turn into a confrontation between Muslims and Christians. But we are yet to be there. We have to say that we are not there so far."

Prophete Ngaibona, who is holed up with his family in Bossangoa, would disagree. He left his village in the wake of a Seleka attack.

"We pray that there's a Christian president," he added.

Bishop Aziagba described the situation as "primarily a political crisis. One person was helped by mercenaries from Chad and Sudan to get into power.

"Once he got into power, he was supposed to be president for the whole country. Unfortunately, most of the mercenaries who helped him to get into power are Muslims, mercenaries from abroad. They don't have any feeling for the local population, so they started committing abuses, looting their properties, cows, ransacking their crops, burning down everything they had," he added. 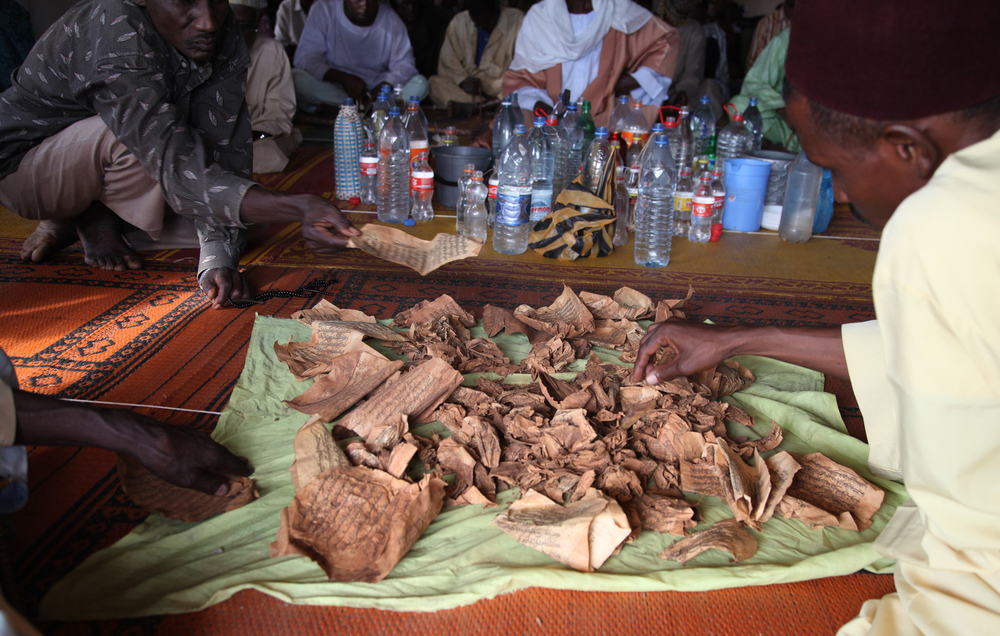 Louisa Lombard of the University of California at Berkeley noted in April 2013 that many Muslims in CAR had long put up with discrimination: "People from southern CAR frequently refer to all north-easterners as 'foreigners' (Chadian or Sudanese), meaning that regardless of their actual citizenship status, they do not belong in the country. When they travel, people from the Northeast are targeted for special surveillance because of their alleged 'foreignness'. For instance, on the many roadblocks operated by branches of the state security forces, rebels and/or others, people with Muslim-sounding names or dress are frequently subject to harassment and extra extortion."

The International Crisis Group, in a report published in June 2013, wrote that the latest rebellion was "conducted by disgraced former politicians looking for vengeance and a return to political power. Seleka is therefore a heterogeneous coalition of Central African and foreign combatants who have nothing in common except being Muslims."

The report added: "The political, geo-ethnic and religious balance within the country's leadership has been shaken up, provoking fears and confusion in CAR and in neighbouring countries. The military aircraft transporting the Seleka's wounded flew to Khartoum and Rabat, the visit made by Central African leaders to Qatar, and the concerns expressed by neighbours (South Sudan, Uganda, Congo-Brazzaville) about the rise of religious fundamentalism have created a climate of suspicion and dangerous religious tensions within the country and the region."

In a September 2013 article for the International Peace Institute Global Observatory, French researcher Roland Marchal said Seleka fighters had "notional inclinations for political Islam" but also shared "a strong sense of communal identity and a will to avenge previous CAR regimes and their beneficiaries identified as Christians."

Some of those seeking sanctuary in Bossangoa are convinced the fighters that made up Seleka are more interested in wealth than political power and are using religion as a pretext to obtain it from CAR's natural resources such as diamonds, gold and timber.

Dofio Rodriguez saw his brother's throat slit by Seleka in a Bossangoa police station and says three other family members were killed on the roads. He narrowly escaped an attack on a gold mining area 30km from the town, to which he said local Muslims had led the fighters.

"Before, we had good relations with Muslims who were in the bush with us, looking for gold at the same time. But since the Seleka have come, they just want to kill us and take all we have," he said.