Policy changes that encourage and provide incentives to create jobs in Sri Lanka’s northern former war zone are necessary to ease the impact of dwindling aid there, experts say.

Since 2010 three successive appeals for reconstruction work under the Joint Plan of Assistance to the Northern Province issued by the UN and Sri Lanka government have been underfunded by US$430 million. In the last two years the shortfall was $297 million.

The slowdown in aid has been linked to the World Bank categorizing Sri Lanka as a low middle-income country in early 2012.

“The middle income status directly affects donor contributions towards post-war reconstruction, rehabilitation and remaining humanitarian assistance,” said a June report by the United Nations after a visit to seven districts in Northern and Eastern provinces.

Despite large-scale infrastructure development in Northern Province since the end of the war in May 2009, recent research by the UN Refugee Agency (UNHCR) found provincial income and livelihood levels remain low.

A UNHCR survey from June this year found only 9 percent of some 900 households in six northern districts (Jaffna, Kilinochchi, Mullaitivu, Vavuniya, Mannar and Trincomalee) had salaried employment; more than 55 percent gained income through irregular daily work.

“Over 43 percent of the respondents report a monthly household income of Rs. 5,000 [$40] or less,” the survey said. It also found that average household monthly income was $70, or less than a quarter of the national average.

Anushka Wijesinha, an economist at the Institute of Policy Studies of Sri Lanka (IPS), said despite the country’s recent low middle income categorization, parts of Sri Lanka, especially the north, were still in similar - if not worse - circumstances than what is found in low-income countries.

The government will increasingly find it difficult to raise development and humanitarian funds outside the country at low interest rates, said Wijesinha, counselling planners to make policy changes to raise funds domestically.

“Two things the government can do - become much more effective in revenue collection. The second option is to spend money more judiciously,” he said.

The economist said Sri Lanka’s current tax revenue collection of 11-13 percent of the GDP needed to increase to 18-25 percent.

Chandana Kularatne, an economist with the World Bank based in Washington, said to create jobs, local industries need special attention.

“For economic activity to truly gain pace, individuals should be provided with economic opportunities and any regulatory impediments to economic [development] should be lifted.”

In addition to the approval process an investor faces elsewhere in the country, in the north, approval may be required from civilian authorities and the military, which has a large footprint in civilian activities, including commerce.

Government officials in the region say efforts have been made to boost local industries.

The Northern Reawakening Programme under the Ministry of Economic Development has spent over $12 million since the war’s end on village-level development projects, said programme officials in the northern Vavuniya District.

Despite the fish-rich seas, northern fishing has yet to recover from the conflict that ended in May 2009 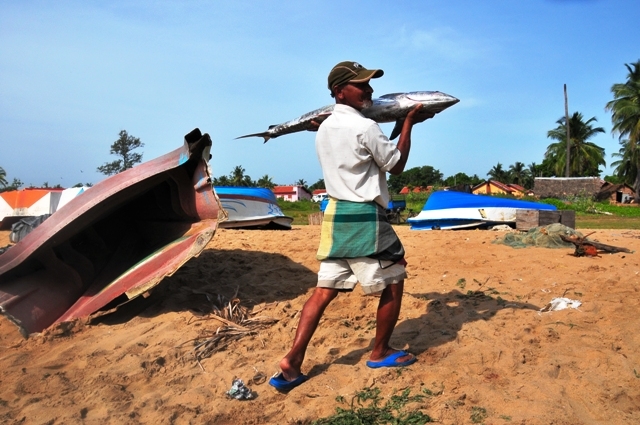 Over 200 villages have also received funding for community managed projects that disbursed $45,000 per project. The supported projects include shrimp farming in Mannar District, a paddy mill and rice distribution centre in Oddusudan village in Mullaitivu District, and assistance to dairy farmers in Vavuniya District.

“While the bigger projects have been going on, we have not neglected the smaller industries,” Rupavathi Ketheswaran, the top government official in Kilinochchi District, told IRIN.

But IPS’s Wijesinha said that given the destruction wrought by 26 years of war that displaced more than 460,000 by the end of fighting, more is needed.

Rasiah Janakumara, head of the Jaffna Chamber of Commerce, said the government focus has largely been on attracting outside investments to the region in the past three years, rather than developing a local investment base.

“We get the same [interest] rates as elsewhere in the country. There is no special treatment just because we are going to invest in the Northern Province. The demand for collateral is the [same] as anywhere else in the country,” Janakumara said, arguing that local investors should get preferential treatment because their profits are more likely to stay in the region - as well as the investor themselves, and for longer.

Wijesinha said, first, northern entrepreneurs will need business skills training to catch up with counterparts elsewhere in the country not hobbled by decades of shuttered businesses.

The World Bank’s Kularatne said access to seed capital and business grants is vital for livelihood creation, and that more effort is needed to expand markets for local staples, including agriculture and fisheries.

According to the Northern Provincial Council, 70 percent of the provincial population in 2012 was engaged in some kind of agriculture cultivation and 25 percent was linked to fishing.

Most of the local economy in the region for years has come from the public sector or donors.

According to the latest Central Bank statistics, government services (including public administration and defence) accounted for 25 percent of the northern provincial GDP, construction (almost entirely funded by donors and public money) another 11 percent, and donor-funded projects made up around 5 percent, bringing the total to nearly 41 percent.

That year 10 percent of the country’s paddy harvest was from Northern Province, where paddy cultivation grew by some 18,000 hectares since 2011 to nearly 84,000 hectares. And during the first half of 2012 the fish catch grew to 16 percent of national supply from around 10 percent in 2010.

According to Janakumara from the Jaffna Chamber of Commerce, still needed are processing and storage facilities so northerners can profit more from their resources. He gave the example of how inadequate storage facilities and the lack of a wholesale market for fish in the north was forcing fishermen to sell their catch at outsiders’ first bids.

Similarly, vegetable buyers will wait following a good harvest in the north to buy at the lowest price possible at the last minute possible knowing sellers cannot store the surplus.

And the lack of sufficient milling facilities in the north means buyers set the price for rice because they can process it.

“It is still a buyer’s market in the Vanni [north]. What is needed is to make it more balanced [so sellers are not at the mercy of buyers],” Janakumara said.