Read about what we achieved.
COLOMBO

Sri Lanka has yet to address the psychological trauma suffered by family members of thousands of missing persons, even decades after their disappearances, by not acknowledging the extent and circumstances of these disappearances, say activists and researchers.

“Family members are often haunted by questions or fears about what suffering their missing spouses, children or parents may have gone through or may be experiencing still,” Ananda Galappatti , a medical anthropologist and national consultant with Colombo University, told IRIN.

“The uncertainty of not knowing whether to mourn a missing person as dead or whether to keep searching leaves family members ‘stuck’ in their process of dealing with the loss - both emotionally and socially,” he said.

There is limited organized psychosocial support in Sri Lanka for families of the people missing, he and other experts have long noted.

Galappatti said this lack of assistance has been largely due to limited support from both the state and non-profit sector, adding that the complex and often sensitive circumstances of disappearances deter help-seekers as well as help-providers.

“Many psychosocial service providers are not well equipped for negotiating these [politically sensitive] issues, which fall outside of the traditional skill-set for support workers,” he said.

Some NGOs report the government has restricted their access to families in need.

Saroja Sivachandran, director of the Jaffna-based Centre for Women and Development, said government authorities and the military have until recently been reluctant to allow NGOs like hers, which work in human rights (such as tracing the missing), do field work. Government officials in the north denied obstructing access.

Sivachandran said even after access was relaxed for a number of these NGOs, starting in 2011, many victims are still reluctant to cooperate when approached by the organization.

Rukii Fernando, an activist with the Rights Now Initiative, a national NGO of activists and researchers, said the government’s reluctance to acknowledge disappearances is to blame for the country’s anaemic psycho-social support sector.

“Acknowledging and talking about it [disappearances] is a fundamental basis for tackling trauma. Governments’ hostility [to the issue] also reduces opportunity to get financial resources and human resources - for example, from many Asian and Latin American countries, which have positive experiences in this,” he said.

Maheshwari, a 24-year-old woman from the northern district of Kilinochchi, who requested IRIN withhold her family name, has been looking for her brother since their family tried to escape the last bout of fighting during the first week of May 2009.

“We were together until we crossed the lagoon,” she told IRIN, referring to the lagoon at Nathikandhal, a coastal village in Mulaittivu District. There was a scramble as they crossed government lines, and her brother was separated from the family.

They have not seen or heard from him since.

Maheshwari reported still experiencing bouts of insomnia, depression and feelings of hopelessness - for which she has never sought treatment - making it all but “impossible to move on”.

“When you are living in limbo, not knowing what happened to your loved one, you keep vacillating between hope and despair,” said Amnesty International’s spokeswoman in Australia, Ming Yu.

In the last three and half decades, large-scale disappearances - though how many precisely is unknown - have occurred. In that time, the country has seen an insurrection launched by the Janatha Vimukthi Peramuna (People’s Liberation Party) in the south of the country, from 1988 to 1989, and a decades-long civil war in the north between government forces and the Liberation Tigers of Tamil Eelam rebels, which ended in May 2009.

Local activist Fernando said that a widely circulated, though officially unsubstantiated, figure of disappearances during the 1988-89 insurrection is 60,000.

In 1995, a presidential task force investigating the disappearances recorded at least 30,000 complaints of “involuntary removals and disappearances”.

A mother holds her child in northern Sri Lanka. A substantial amount of reconstruction work still remains in the country's former conflict zone 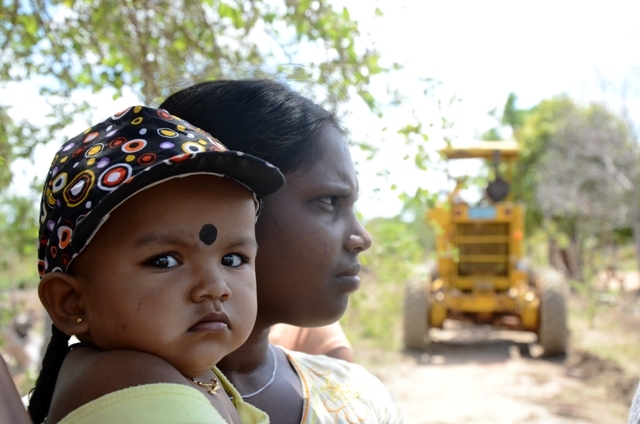 Up north, the number of those who went missing during the 26-year civil conflict has remained equally elusive. According to a 2011 government survey, there were 2,635 persons listed as “untraceable” in Northern Province between 2005 and 2009, while researchers and humanitarians who worked there during the conflict estimate more.

As of 2012, the International Committee of the Red Cross (ICRC) had documented 16,090 cases of missing people in Sri Lanka, but many of these cases may predate this period, and include those who disappeared during the 1988-89 insurrection.

According to ICRC records in 2012, it received 310 new requests to trace missing persons. None of the older cases were closed.

Since its establishment in 1980 to assist relatives of disappeared persons, the UN Working Group on Enforced or Involuntary Disappearances has sent 12,473 cases to the Sri Lankan government. Of these 5,676 cases remain outstanding after the government confirmed what happened to 6,535 persons, other sources clarified what happened to 40 disappeared persons, and 222 cases were determined to be duplicate cases.

The cases submitted to the UN since the 1980s puts Sri Lanka only second to Iraq in terms of officially recorded complaints for the same period, according to Amnesty International.

The NGO estimates the actual number of people still unaccounted for from the northern conflict is around 30,000, based on activists’ reports and other research.

Others in need of mental health services

But it is not only families of the missing who may be in need of mental health services.

Victims of conflict-linked terror attacks that took place outside the main theatres of war in the north report ongoing fears.

A woman who was near a packed bus where a bomb exploded in Pilyandala, a suburb of Colombo, on 25 April 2008, told IRIN she still feels nervous boarding crowded buses. The bombing killed 24 and left over 40 injured.

“I saw the bus explode. Now sometimes I get a chill when I am traveling to work. I walk about 2km from where the bomb went off to the main bus stand instead of taking a bus [in the former location],” said Nayanthi Fernando.

Ahead of an official visit from UN Human Rights Commissioner Navi Pillay, Sri Lankan President Mahinda Rajapaksa appointed a three-member Commission to Investigate Missing Persons to focus on people vanished during the civil war in the north and east.

It is due to submit a report to the president within six months.

Following her week-long visit, the commissioner said she had been “extremely moved by the profound trauma” among relatives of the missing and dead, as well as war survivors.

“Wounds will not heal and reconciliation will not happen without respect for those who grieve,” Pillay said.

According to government doctors and mental health experts, since the 2004 tsunami - which killed more than 30,000 in Sri Lanka - much progress has been made to improve mental health facilities.

“Doctors and senior staff at all the main government hospitals are now trained to detect mental illness quite quickly; the cases are referred to us, ” said Vindya Kumarapelli, the deputy director at the National Institute of Mental Health, the country’s premier mental health facility located in Colombo.

The tsunami was a major catalyst for the development of mental health facilities, noted an August World Health Organization (WHO) publication on creating sustainable mental health care post-emergency.

A National Mental Health Policy was adopted in 2005. To deal with the severe lack of trained mental health professionals, the Sri Lanka College of Psychiatrists and the Ministry of Health initiated in 2010 a one-year diploma course in psychiatry for medical professionals.

Sixty graduates of the programme are working in Sri Lanka, and all districts have at least one doctor with this diploma, the WHO report said.

But the report also noted that “mental health has lost prominence within the political agenda compared with the year following the tsunami”.

Kumarapelli said one of the other major challenges is the lingering taboo of mental illness, especially in rural areas.

She estimated some 2 percent of the population (more than 400,000 people) has a major mental illness while another 10 percent has depression or anxiety.

“What we need is more awareness-building among the people [so] that they realize that mental health issues are similar to physical issues and can be treated effectively,” Kumarapelli said.

ICRC protection delegate Zurab Burduli said families of the missing have more immediate and basic needs: recognition by the state that their relatives are missing, acknowledgement of their special needs due to the loss, and the legal and economic means to meet them.

“The waiting continues. And it aggravates all those problems faced by the families. Leaving the needs of the families unattended does not make those needs vanish,” he concluded.