Fresh fighting between the rebel M23 and the army of the Democratic Republic of Congo (DRC) in the eastern province of North Kivu could spell the end of efforts to reach a negotiated settlement to the conflict, analysts say.

In what have been described as some of the deadliest clashes since the rebellion began in April 2012, FARDC (the DRC army) and M23 have been fighting since 14 July in areas around Mutaho, Kanyarucinya, Kibati and in the mountains near Ndosho, a few kilometres from Goma, the provincial capital.

An estimated 900,000 people are displaced in North Kivu, more than half of them by the M23 rebellion; tens of thousands more have fled across the DRC’s borders with Rwanda and Uganda. Humanitarians continue to flag the issue of civilian protection in and around Goma, where fighting over the past year has displaced more than 100,000.

IRIN has put together a briefing on recent developments in the talks and the conflict.

What's happening with the Kampala talks?

A new round of peace talks between the two sides in the Ugandan capital, Kampala, has stalled, with Raymond Tshibanda, the DRC foreign minister and head of the government delegation, and Apollinaire Malu Malu, his deputy, absent from the venue.

The talks, which kicked off in December 2012 under the auspices of the International Conference on the Great Lakes Region (ICGLR), first broke down in April: M23 representatives walked out following a decision by the UN to deploy an intervention brigade to neutralize armed groups in eastern DRC.

"The two sides are still extremely far apart in their negotiating positions and a compromise is difficult to envision without hefty intervention by diplomats. So fighting is almost inevitable, even if only to improve negotiating positions," Jason Stearns, director of the Rift Valley Institute's (RVI), Usalama Project, which conducts research on armed groups in eastern DRC.

"The Kampala talks are moribund. I can't envision a deal acceptable to the M23 that foreign diplomats and the Congolese government could sign off on; the M23 would have to disband and reintegrate into the national army, which its leaders will find difficult to stomach, as they don't trust the government."

Each side accuses the other of not being sufficiently committed to reaching a diplomatic settlement to the conflict.

"It depends on whether M23 is ready to accept on what has been decided in Addis Ababa and [with] UN for them to disarm. If they accept, we are ready to finalize the Kampala process," DRC government spokesperson Lambert Mende Omalanga told IRIN by phone.

On 24 February, 11 African countries signed a Peace, Security and Cooperation Framework for the DRC and the Region, aimed at, among other things, improving security and consolidating the state's authority in eastern DRC.

What are the accusations being traded?

But Omalanga accused Rwanda of continued influence over M23, a charge both the Rwandan government and M23 strenuously deny.

"Kinshasa is not interested in the talks, but a military option. We have been here seeking for a bilateral ceasefire. But government has since refused and prepared for the ongoing war," Rene Abandi, the head of M23's delegation, told IRIN. "It's playing double standards... trying both methods - peace talks and military solution."

"It may sound like a paradox but, for peace negotiations to start, the balance of power on the ground must be changed. The two parties [M23 and the DRC army] will only negotiate if they lose on the battlefield."

Abandi added that until the head of the government delegation or his deputy arrived, M23 would not negotiate, and called on the ICGLR, the African Union and the UN to put pressure on Kinshasa to actively participate in the talks.

"Long before the resumption of fighting, the Kampala peace talks have had a bleak future. Over the course of the last seven months, the warring parties have employed deliberate delaying tactics, militaristic bluster and traded fierce accusations of foul play as a means of furthering narrow political agendas," Timo Mueller, Goma-based field researcher for the Enough Project, which fights genocide and crimes against humanity, told IRIN.

"As the fighting rekindled on Sunday [14 July], some analysts see a direct relationship between the deadlock in Kampala and the renewed fighting. But while the fighting is a near-death experience for the talks, both parties have an interest in keeping the talks alive so as to be seen as willing to seek political peace, albeit crippled they may be."

He added: "The rhetoric and actions of the Congolese army reflect a consistent strategy to pursue only military confrontation with M23 on the battlefield and forego any existing political efforts. But while military actions undermine and contradict the talks, Congo has no interest in unilaterally withdrawing from an initiative strongly favoured by the international community.

"M23, will desperately hold onto the talks to present itself as a grievance-driven group eager to discuss political reforms with Kinshasa and because it is too weak militarily to advance its interests outside political avenues. The talks offer the only existing avenue for M23 to deliver agreement on amnesty for senior leadership and military reintegration into FARDC, something that the UN PSCF [the Peace, Security, and Cooperation Framework] or any other international process would be unlikely to yield. Both parties will remain at loggerheads for the foreseeable future, leaving scant hope for a genuine peace agreement."

According to Thierry Vircoulon, an analyst with the think tank International Crisis Group, "It may sound like a paradox but, for peace negotiations to start, the balance of power on the ground must be changed. The two parties will only negotiate if they lose on the battlefield. Kinshasa accepted to come to the Kampala talks only because it lost Goma last year and was dominated on the ground."

But Usalama's Stearns says neither side is keen to escalate the ongoing conflict. "The M23 is limited by its troop numbers, which are probably still under 2,000, with a large area to cover. For the Congolese army, they would probably want to wait until the UN Intervention Brigade is fully operational, which could take another month."

A 3,000-strong intervention brigade mandated to "neutralize... and disarm" armed groups in eastern DRC is due to be fully operational at the end of July. The UN Stabilization Mission in DRC, MONUSCO, also intends to have unarmed surveillance drones in eastern DRC to monitor developments.

How much support is there for talks?

The problem in eastern DRC is primarily political, and "no amount of military power can solve it," Lt-Col Paddy Ankunda, Uganda army spokesman and spokesman for the talks, told IRIN.

"The causes of the M23 rebellion and the wider conflict are a mesh of political, socioeconomic and security factors. A political, non-military solution is needed, including, amongst others, security sector reform, democratization, decentralization, human development, reform of the minerals sector and regional economic integration," said the Enough Project's Mueller. "The Kampala peace talks should best be subsumed by the UN PSCF. It will also be critical to get Congo, Rwanda, and Uganda together to start negotiations to deal with economic and security issues that have been driving the war."

A woman and her family flee ongoing fighting between M23 rebels and Congolese government forces outside Sake, near Goma in the Democratic Republic of Congo (November 2012) 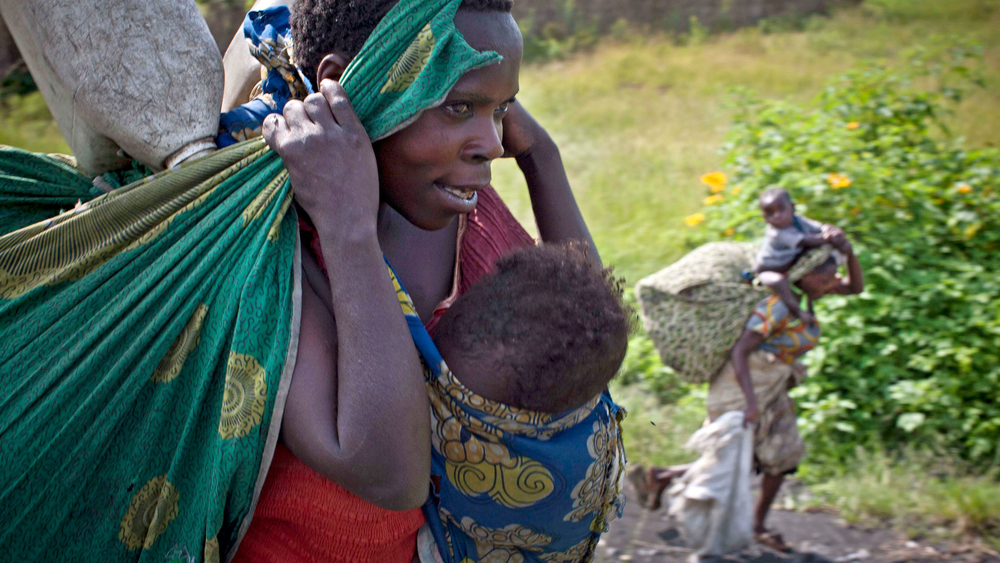 "[UN Secretary-General's Special Envoy to the Great Lakes] Mary Robinson must also ensure that the Congolese reform process and national Congolese dialogue are mediated by an impartial facilitator and have civil society directly at the table. If the process is not neutral and inclusive, the reforms will fail," he added. "Another behind-the-door deal among elites will be just another recipe for failure, likely brewing new dissent and stoking a wholesale resurgence of violence."

In eastern DRC, however, not everyone is keen on a peaceful solution to the crisis. Kabila has repeatedly done deals with rebels as a way of ending national and local conflicts, and has been criticized for this by oppositionists, civil society and national media. "Give war a chance" has been a popular refrain with many fierce critics of the regime.

Is there any unanimity on the ground?

"We think the government should crush the M23 rebellion," Thomas d'Aquin Muiti, president of The Civil Society of North Kivu (an association of NGOs working for better governance in the province), told IRIN, although privately, some of his colleagues deplored his statements.

Kabila's recent pursuit of the military option against the M23 certainly appears to have the support of many ordinary people in Goma. There were jubilant scenes on 15 July when it was learned that FARDC had retaken a hill overlooking Goma from which the rebels had threatened to target the airport. Crowds of men waving leafy branches did victory runs on the outskirts of the town, and rumours that MONUSCO was trying to block a further advance by the army prompted angry demonstrations outside a UN base.

A group of women who had been displaced by the fighting voiced strong support for FARDC when asked by IRIN what they thought of its offensive. "We will be very happy to see our village liberated and we hope the army will do it," said 44-year-old Fouraha Kanamu to a loud chorus of approval from the other women.

But condemnation of M23 is not unanimous in Goma. Thousands gathered and cheered the rebels after they briefly occupied the city in November 2012 and organized a rally in a stadium. Many of these people were government employees who were hoping the M23 would pay them, but even before the rebel takeover some citizens were quietly expressing support for the movement.

"They can't be any worse than those in power now," was the kind of comment heard from some people, who would claim that the Rally for Congolese Democracy (RCD) rebels - a Rwandan-backed movement that occupied eastern Congo during DRC's second civil war (1998-2003) - had at least provided better policing and road maintenance in Goma.

The M23 makes much of the DRC government's notorious corruption and incompetence, but has never held any elections, and judging by the electoral record of its predecessor movement, the CNDP (National Congress for the Defence of the People, which won just one seat in the 2011 national elections) would be unlikely to win many votes.

However, M23's behaviour during the 10 days that it controlled Goma alienated many erstwhile sympathizers. "They plundered government offices, officials' houses and even a hospital, so we saw they weren't really interested in better governance," said one civilian.