Since 2010, monsoon rain in Pakistan has brought with it some of the biggest seasonal flooding in living memory.

Two months from this year’s rains, weather forecasters are already predicting above normal rainfall and in some areas standing water has yet to drain away from last year’s monsoon.

So, after three years of destruction, how ready is the country for this year’s monsoon?

“The situation is not what we would call optimal, but over the last three years, since the 2010 floods, there have been significant improvements [in government and humanitarian organisations’ capacity],” said Khaleel Tetlay, chief operating officer at the Rural Support Programmes Network, which is working with the US Agency for International Development (USAID) in Sindh Province to boost communities’ resilience to natural disasters.

“[Whether or not heavy rain will cause flooding] is very difficult to predict. But if we prepare at the federal, provincial and community levels, a lot of damage can be prevented, especially the loss of life.”

The three floods have damaged infrastructure and houses, displaced millions and caused billions of dollars’ worth of losses to the country’s most important sector - agriculture.

The residual humanitarian impact of last year’s floods and the slow drainage of floodwaters have increased vulnerability. Over a million people have yet to return to their homes, living either in temporary settlements or shelters built next to their damaged houses.

On the other hand, the experience of three years of flooding has also strengthened coping mechanisms and the quality of any eventual humanitarian response.

Reducing the risk of disaster requires investment in several sectors, among them the reconstruction and reinforcement of infrastructure in flood-prone areas.

The need for such work becomes clearer when the pattern of flooding is examined.

While the 2010 flood - which at one point covered over 20 percent of the country - was caused by waterway breaches, in 2012 water levels rose because of heavy rain and a lack of proper drainage in flat areas.

“In many areas [of northern Sindh], the drainage systems could simply not cope with the rain [in 2012], and that is why water hasn’t drained properly. The idea is to improve these systems, rebuild them properly where needed, so that even with heavy rain, water can be taken away as quickly as possible,” Saifullah Bullo from Sindh Province’s Disaster Management Authority (DMA), said.

The focus from the DMA is on rebuilding embankments and improving waterways and reservoirs. To help drainage, teams of workers are digging new channels in areas where standing water is expected to be an issue.

"The situation is not what we would call optimal, but over the last three years, since the 2010 floods, there have been significant improvements", Khaleel Tetlay, Rural Support Programmes Network

Reconstruction projects give a chance to “build back better” - making sure rebuilt buildings are more resilient to whatever flooding may come in the future.

“The threat is there, and we have been advising people not to build in very low-lying areas or near rivers and canals. So many houses were completely damaged because they were right next to the channels that overflowed,” Irshad Bhatti, a spokesman for the National Disaster Management Authority, said.

“The idea is to help people make better decisions, keeping in mind the threat of floods. Preparation is the most effective strategy.”

There is a clear once-bitten-twice-shy logic about preparing for the monsoon, after three years of devastation.

At the heart of this is disaster risk reduction (DRR): A dollar spent on disaster preparedness is worth seven dollars in post-disaster relief and recovery expenditures, according to the UN Development Programme.

As Pakistan prepares for the rains with a certain sense of déjà vu, aid workers are asking what can be done to avoid repeating the same emergency relief operations each year.

“The drive for funding DRR has come in part from the fatigue and frustration of… donors,” said Shahida Arif of the DRR Forum, an alliance of 69 national and international NGOs.

“It can seem to them like they are continuously funding activities in post-disaster interventions, when many believe the need for this could have been reduced or avoided with investment in disaster mitigation activities.”

Without an effective DRR strategy and adequate preparation, the effects of natural disasters like floods can linger for years.

Damage to cropland by floods in one year, for example, can have an adverse economic impact on farmers’ livelihoods for years to come, as, unable to plant any crops, they are forced to borrow money to make ends meet.

Without emergency financial assistance, the next plantation cycle is affected too - a serious concern as most communities in areas hit by floods since 2010 rely on agriculture for their livelihood.

The 2012 Monsoon Humanitarian Operational Plan (MHOP) expired in March this year, but activities across several areas are ongoing given the critical needs of the affected population.

The humanitarian partners involved in the plan only received 33 percent of the US$161 million that was needed to fully fund it, leaving gaps in coverage.

But despite funding constraints, humanitarians say they have been able to mix in some DRR activities with the ongoing relief distribution.

While providing treatment and medicine to flood victims, district-level health officials from the Sindh government and aid workers have been instructed to explain preventive measures against disease, including bednets, good hygiene and the importance of vaccinations.

Diseases often spike in the aftermath of flooding as water sources become contaminated and insects like mosquitoes multiply in standing water.

The information could prove useful for people like Mohammed Hayat, a farmer whose village of Mir Sikander in Sindh’s Jacobabad District was completely submerged by flooding in 2012.

“The little one is always feverish, off and on, and I have to spend money I don’t have on taking him to Jacobabad. There is the bus fare, and then any medicines the doctor recommends,” Hayat said. “He has been like this since the floods hit.” 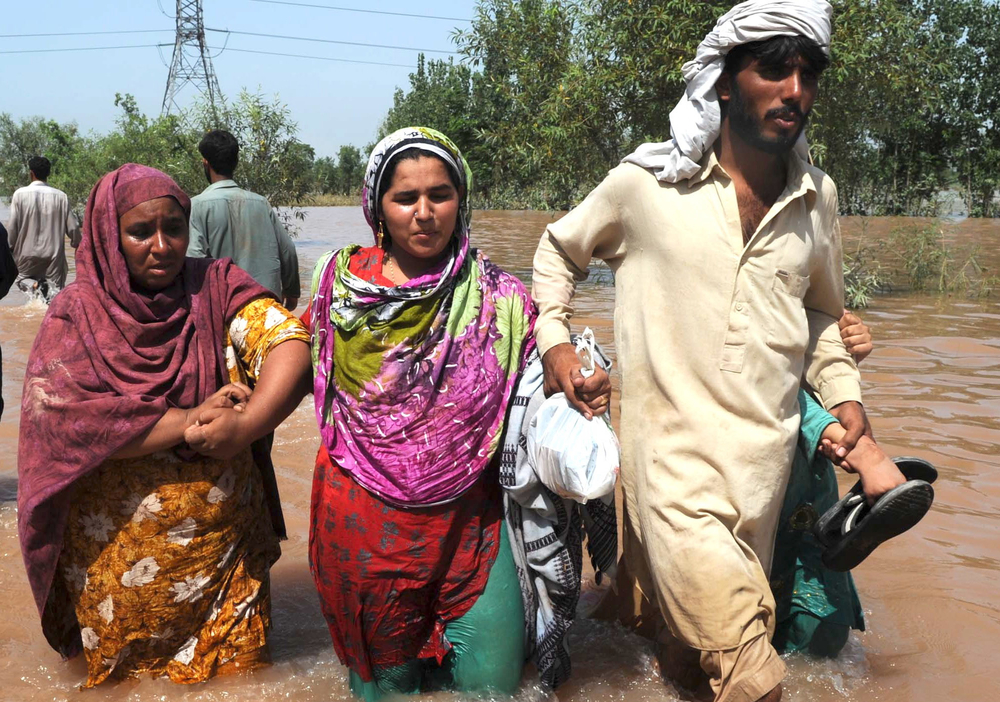 Hayat’s family built a temporary shelter after the flood damaged their house, and have not left their village.

“The water is still here in my village, and the mosquitoes breed on it. We have some nets but there are too many mosquitoes, all over the village,” said Hayat. Most villagers in Mir Sikander were not equipped with mosquito nets when the floods hit, he added.

The experience of the last three years has taught the importance of coordination and helped build a stronger humanitarian system.

One critical need for villagers like Hayat is shelter, a sector where humanitarian organizations are pooling resources and combining efforts to ensure that their response is efficient and quick.

USAID has helped fund a dedicated shelter cluster team to ensure that relief operations during disasters are efficient and that wastage is reduced.

Several organizations have also conducted pilot projects to gauge the value of using communication technologies to help improve both preparedness and relief operations, relying on the high and growing number of mobile phones in Pakistan.

The CDAC (Communicating with Disaster-Affected Communities) Network ran a three-month project to improve the exchange of information in disaster areas, in particular between those affected and those providing assistance, using technologies like SMS.

A year later, Pakistan NGO Strengthening Participatory Organisation and the Popular Engagement Policy Lab teamed up to set up a system where, using mobile phones, those affected by the floods could provide feedback about the assistance they were, or were not, getting.

The effort is expected to be increased this year, and could improve relief operations by directly connecting providers with the affected.

“The framework for emergency needs assessment is in place and agreed by all stakeholders, so it can be rolled out as soon as a disaster strikes. This is a key achievement,” a spokesman for PHF said.

The under-funding of disaster risk reduction and disaster management strategies means significant post-disaster work will be needed each year that there is heavy monsoon rainfall.

“Due to limited resources, the scale of DRR/M programmes is very small and scattered,” the DRR Forum’s Shahida Arif told IRIN.

“In a calamity-struck country, such as Pakistan, it is imperative that long-term, comprehensive, [two- to four-year] DRR interventions are initiated,” she said.

In addition to funding, the lack of coordination between critical disaster-related institutions of the Pakistan government is a major hurdle.

“For DRR to really work, it can’t just be the [National Disaster Management Authority]. Every department, every ministry, has to be on board so that they integrate DRR into their policies and projects,” a senior NDMA official said, requesting anonymity as he was not authorized to speak to the media.

Under the DRR plan of the Pakistan government, 10 federal ministries, including health, food security, education and housing, are supposed to be involved.

“We have made progress with making policy and setting out goals, but actually bringing everyone on board has been a slow process, and it is far from complete,” the NDMA official said. “We are on the right path, but if everyone is not on the same page, it will not work very well.”