For many residents of southern Lebanon, economic development in their region is a fool’s dream.

The central government in Beirut, paralysed by political crisis, has done little to develop the peripheries of Lebanon, especially in the south, which is dominated by militant and political group Hezbollah.

With Israel on its border and the possibility of renewed war ever-present, foreign investment is also limited here.

Donors, having poured money into the reconstruction of southern Lebanon after the 2006 war between Hezbollah and Israel, have since moved on.

“We don’t have aspirations to improve our lives,” says Abdullah Daakour, a Sunni leader from Sheba’a Farms, a poor strip of land at the nexus between Lebanon, Syria and Israel, most of which remains occupied by Israel. “We are just in survival mode day to day.”

But for the first time in decades, the UN says, there may be an opportunity to change that. The six years since the war may well represent the most stable period in south Lebanon’s history.

So given the constraints, what are some options for the sustainable development of southern Lebanon?

A major solution for the stagnation of the south, the UN argues, is an expansion of government services in the area. “There is a complete absence of the central government here,” says Hassan Dbouk, mayor of Tyre, the hub of commercial activity in the south. Political parties like Hezbollah and Amal run hospitals, schools, even universities. “There is such a large Hezbollah presence that the government is very reluctant to take too strong a role,” says one high level UN official. “That is the key - to treat the south of Lebanon as any other part of Lebanon.” But, warns Sahar Atrache, analyst with the International Crisis Group, the approach must be thoughtful. “You cannot say to the community: ‘We think that what Hezbollah is doing is very dangerous and we want to replace what they are doing… People will get suspicious.” Instead, she said, efforts to increase government presence should be presented as complementary to what already exists.

It is a sad irony that Lebanon imports food, given its south is flush with green mountains and agricultural land with olives, tobacco, citrus fruit and bananas. The agriculture industry has much potential, but is not sufficiently supported. In a small village called al-Fardis, for example, farmers want things as simple as gravel roads to make access to their fields easier. Observers say the Ministry of Agriculture could be using vacant government land to grow forage, which is currently lacking. Farmers also want central policies, like setting up national marketing boards, to help them access international markets (One farmer at a local weekly market told IRIN there was no one left to sell to - many of the south’s residents have abandoned it for jobs in the capital or abroad). The mayor of Fardis calls for a policy banning the entry of Syrian olive oil, which, at a lower cost, is dangerous competition for Lebanese farmers. The agro-food industry is beginning to take hold on some land, but locals complain it is run by and employs foreigners, leaves them with no benefit and, they say, has diminished their grazing land. A UN Development Programme (UNDP) study in 2010 found other areas of useful intervention: encouraging the diversification of crops, including crops requiring less irrigation, and capacity-building for farmers.

A larger-than-life poster of Hezbollah leader Hassan Nasrallah in southern Lebanon. Most of the south's residents are Shia and strongly support Hezbollah 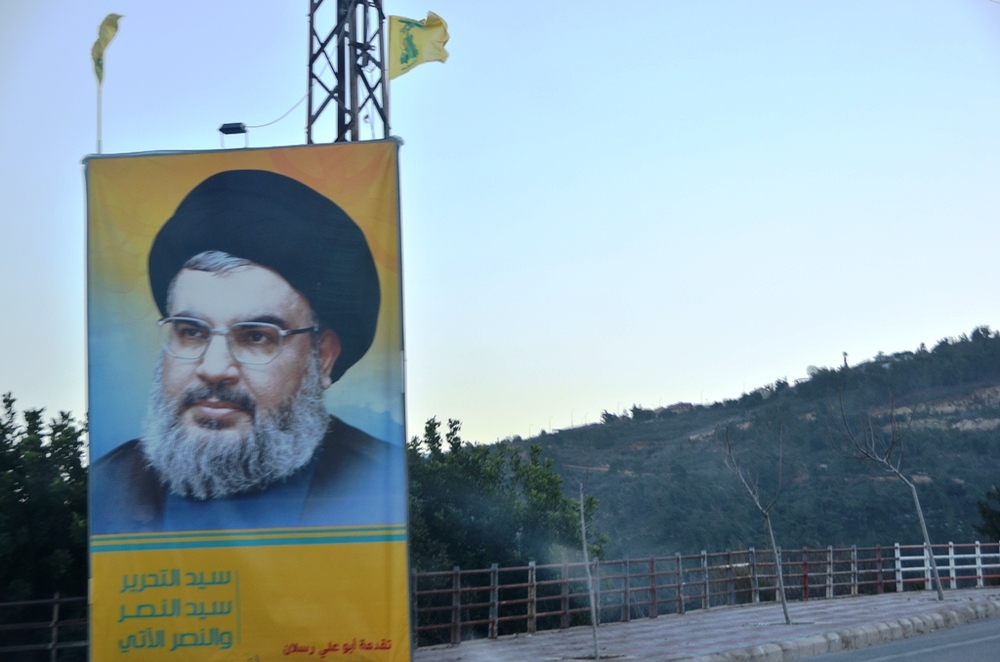 “The south doesn’t need donations,” said one UN peacekeeper in the south who requested anonymity. “It needs sustained economic development.” People have already become dependent on the UN peacekeeping force (UNIFIL) - mandated to monitor the cessation of hostilities between Lebanon and Israel. Its non-military component implements “quick-impact projects” like gravelling roads and providing veterinary services and its troops contribute most of the purchasing power for the economy. “It’s become almost parasitical,” the peacekeeper said. “Development should not be donor-driven… This area needs integration; strategic development; agricultural investment.”

Mayors and local officials complain that they have no authority to make spending decisions, nor the money to spend in the first place. Some municipalities do not even have computers. “Give us the authority and the capacity,” says Dbouk. “And then increase the monitoring and accountability from the central government. But give us the freedom to work.” As it stands, municipalities are mandated to fulfil quite a few functions, but are given few financial resources or capable staff. UNDP is working with the Ministry of Interior to draft a new decentralization law to change this. “The strengthening of the role of the local government is absolutely key,” says Luca Renda, head of UNDP in Lebanon. So far, decentralization has been more of an idea than practice. “It has been left to local initiative and is not a coherent policy from central government,” Renda said.

Drive through Lebanon’s south and you will find village after village with palatial-looking villas built after the war, many of them empty. “This is the contradiction that you see in the south,” says Samir Daher, economic adviser to the prime minister. “You see no economic development, but in fact you see considerable booming and blooming of real estate.” Part of the Lebanese diaspora, living in Africa, North America and elsewhere, is extremely wealthy, and those who have the means should “think internally” about this “schizophrenia”, Daher says. “How come people build million dollar houses there but they are not willing to invest in businesses?”

A hippodrome from Roman times in Tyre, South Lebanon. Tourism has much potential as a source of economic development in the neglected region 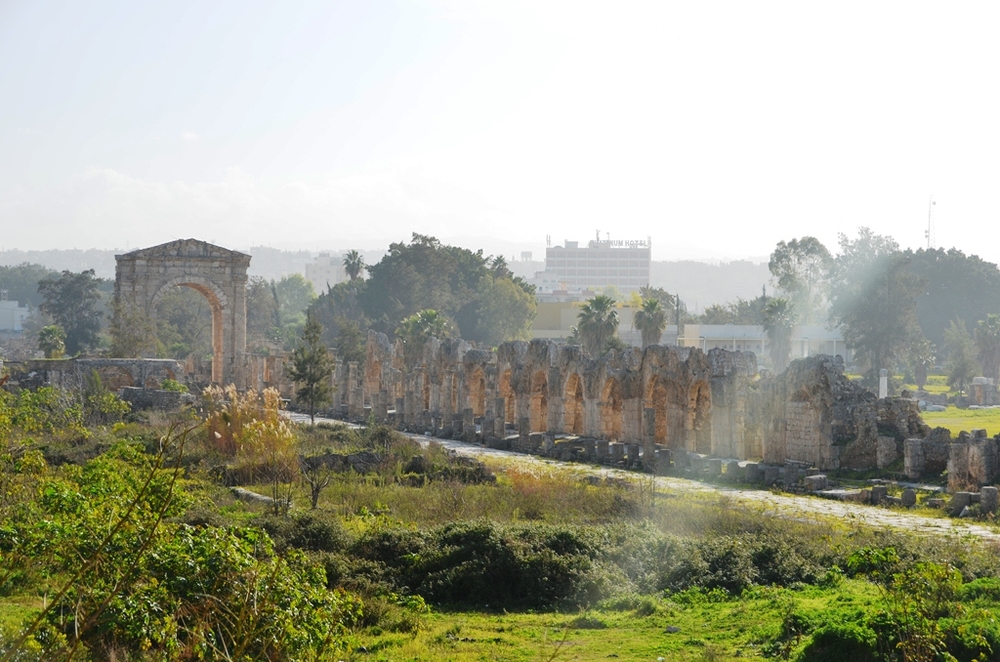 Southern Lebanon’s landscape is visually stunning and is home to many ruins, including a coastline castle from the Crusaders’ time. Some see that while businessmen may be wary of making long-term investments, shorter-term tourism could be encouraged in the relative periods of calm. Abdel Majid Saleh, a member of parliament from Tyre, says the south has to work on its branding. “Tourists think the south is all rockets and explosions and violence. We’re the calmest part of the Middle East,” he says over breakfast on his balcony, which overlooks a magnificent Hippodrome from Roman times. The south is still considered a military zone and foreigners require permission from army intelligence to travel there. But, Dbouk says, the groundwork must be laid now, even if tourists are not yet comfortable coming to southern Lebanon.

Hezbollah’s dominance of the area is another deterrent to investment, according to Hasan Charif, who used to head the Sustainable Development and Productivity Division of the UN Economic and Social Commission for Western Asia (ESCWA), based in Beirut. He says Hezbollah or Amal - the other dominant political party in the south - take a cut of 30-50 percent of any investment “depending on your ties to them… If you don’t pay protection `dues’, someone will come blow you up.” Any investment in the region must be approved by the political parties there, and shops that sell alcohol are also routinely attacked.

What the south needs most is jobs. The UN has played a role in this in the past by providing micro-credit, assets, and training to small and medium-sized businesses and industrialists, who then went on to create jobs for others. One of the main problems, according to Ziad El-Sayegh, chief of staff for the minister of labour, is the absence of a labour or employment policy in Lebanon. The International Labour Organization is now working with the Ministry of Labour to develop one. The Ministry’s National Employment Office has also just launched a first-time job-seekers programme for youth in collaboration with the World Bank. It has a National Employment Office in Saida, the capital of the South Governorate, which should be strengthened, El-Sayegh said. Every year, there are 25,000 new university graduates entering the labour market nationally, and Lebanon can only offer 6,000 jobs, Daher, the economic adviser, said.

An estimated 25 trillion cubic feet of natural gas lie beneath Lebanese waters, off the southern coast. Lebanon’s Daily Star newspaper valued the reserves at US$300-700 billion. But the process for exploration has been slowed by divisions in parliament. The government is meant to start issuing bids for gas and oil exploration this year, and despite the risks, 40 international companies are reportedly interested. If and when exploration and production gear up, companies will have to set up offices in Tyre, which could be a big job creator, says Walid Khadduri, former director of information and international relations at the Organization of Arab Petroleum Exporting Countries (OAPEC). “This is the one promise for the south.”

“We are suffering from a lack of a long-term strategic plan for the region,” says Dbouk, the mayor of Tyre. IRIN spoke to three government officials in Beirut at the Ministry of Labour, the Ministry of Social Affairs and the Prime Minister’s Office; none had specific development plans for the south. “There is no plan at the government level on this,” says Adnan Nassreddine of the Ministry of Social Affairs. “There is no coordination between all the ministries working on development.” Nor do municipalities always have a clear idea of what they need, with some decisions made by mayors on a whim without statistics or popular input.