Artwork hangs on the wall, and a TV sits in the corner.

“Don’t worry,” he tells visitors from the UN Refugee Agency (UNHCR) when they inquire about concerns in the camp. “We can control the disputes in our own community. We don’t need to report small issues.”
Abdullah - recently elected to a refugee committee in the camp - exudes a confidence that reflects his comfort in this camp.

Domiz, 60 kilometres from the Syrian border, is a camp like no other.

Established in April, after Syrian Kurds started fleeing the conflict in Syria in larger numbers, it is already home to more than 2,500 of the 10,000 Syrian refugees who have settled in the autonomous Kur dish region of northern Iraq. New arrivals keep streaming in, at times as many as 100 a day.

“Considering how the situation is worsening in Syria, we could have a big influx,” says Bushra Halepota, head of UNHCR’s office in Erbil, the capital of Iraqi Kurdistan. “It’s a natural home for Kurdish people in the region.”

A home away from home

Every tent at Domiz is pitched on a concrete foundation, with a 60cm concrete wall perimeter. Each family - issued a six-month residency upon arrival - has its own cooking unit, shower and latrine made of brick and corrugated sheet metal, as well as an air cooler and refrigerator, distributed by the government. Some refugees have purchased satellite dishes. Others have opened shops and food stands both in and outside the camp.

The Kurdish Regional Government (KRG) is providing special summer courses taught in Arabic so that refugee children are ready for the new academic year in September. About a quarter of the men have already found work - some within days of arrival - as casual labourers in the city. Richer refugees also hire poorer refugees as labourers to extend the perimeter walls around their tents. The refugee committee is even thinking of setting up a recruitment office in the camp where contractors can look for workers.

In Iraqi Kurdistan, Syrian Kurds have found a home they never had in Syria.

“I came here to my land and my people,” said Lukman Hassan, who came to Domiz from the southern Syrian town of Dera’a, which is much closer to the Jordanian border. “I don’t have relatives here, but they’re all my family.”

Syrian Kurds say they have been robbed of land, property, jobs, rights, even citizenship back in Syria. Tens of thousands of Kurdish families who had lived in Syria for generations only received citizenship in April in an attempt by Syrian President Bashar al-Assad to placate the minority.

“They had nothing left in Syria,” said Abdullah, of the refugee committee. “That’s why they came at such a scale.”

The trouble is that they are so enamored with Iraqi Kurdistan they may not want to leave.

“We will stay, even if the government [in Syria] changes,” said a Syrian Kurdish farmer who arrived in Domiz last month but declined to give his name. “The other neighboring governments will not help us, because we are Kurds. Even the new Syrian government won’t help us.”

Hassan told IRIN he thought it would be four or five years before a new government in Syria stabilizes and he is willing to return home.

“We want a government like that of Kurdistan, with freedom and safety. We just want our rights,” he said. “For 40 years, I had no rights. I need to be able to feel human again.”

Syrian Kurdish refugees at Domiz camp in Iraqi Kurdistan have opened their own falafel stand in the camp. Domiz is home to 2,500 refugees who fled the conflict in Syria for the autonomous Kurdish region in northern Iraq 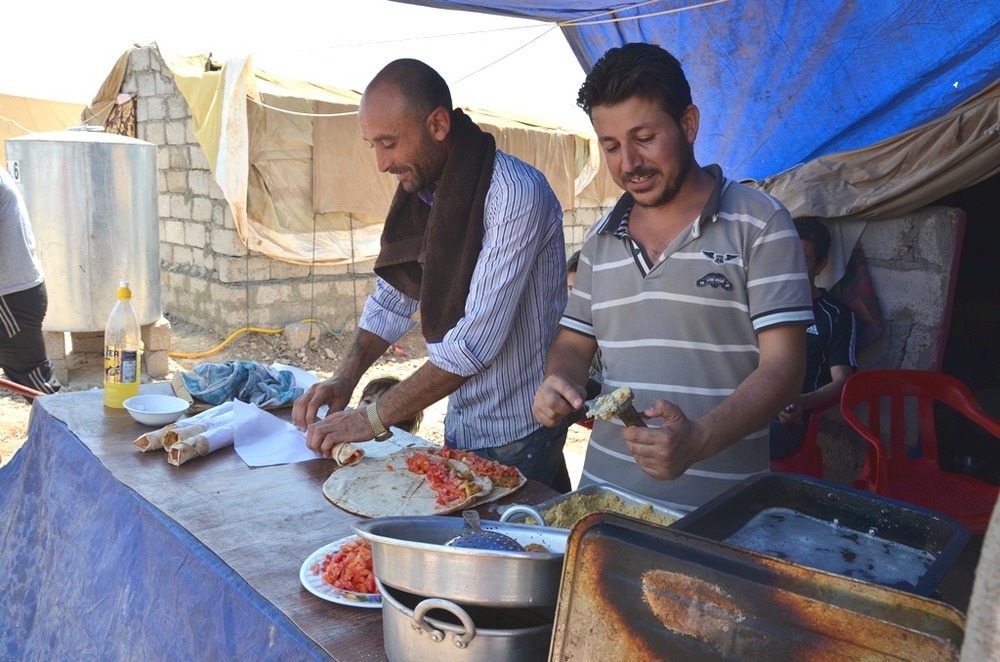 Others have gone further, calling for a federalist system in Syria.

“If it’s not the same situation as Iraq, with a separate government, I will not go back,” the farmer said.

“Until Syrian Kurdistan is autonomous, it will be more of the same,” Ibrahim said. “We want control of the Kurdish areas. We want our land back.”

So far, KRG has had an open-door policy towards the Kurdish refugees. It has already invested nearly US$2.5 million in the first three months of the response and issued a directive last year that all refugees and asylum seekers should be treated as equals. The Minister of Education visited the camp’s school in July.

Mohamed Abdulla Hamo, head of the government’s Displacement and Migration Office at the camp, said there were “no boundaries” to the number of Syrian Kurds the government would accept. The World Food Programme is already planning on having at least 15,000 mouths to feed by the end of the year, and other humanitarian actors are preparing for more arrivals.

But the prospect of a longer stay is “dangerous” to the head of KRG’s foreign relations department.

“This is supposed to be temporary,” Minister Falah Mustafa told IRIN. “Of course, for us, they are our brothers and sisters. They are not strangers to us. If there is anything we can do to make their lives easier, and to make them feel at home, we will do it. But of course, these kinds of things would be done with resources.”

Though KRG has had support from the international community, it has limited resources. Due to a lack of funds, UNHCR has had to restrict its assistance and minimize plans to expand the camp (it aims to be able to house 7,000-10,000 people).

Support for livelihoods, higher education, employment, secondary-level healthcare and warming systems to help refugees cope with the upcoming winter are all also dependent on additional funding.

In the UN’s regional appeal for Syrian refugees, UNHCR has appealed for $15 million to respond to refugees in Iraqi Kurdistan.

But Halepota said outside funding has fallen flat, with UNHCR depending on its own internal funds thus far: “We will need money very soon to continue the response.”

But given the politicization of the Kurdish population, analysts say KRG may have more than financial considerations in mind.

Syria’s Kurds are now caught between a number of factions vying for influence in the Syrian conflict. Many Syrian Kurds are supporters of the Kurdistan Worker’s Party (PKK), deemed a terrorist organization by the West for its fight for independence from Turkey. For years, the PKK has been shelling Turkey from its base in northern Iraq, and KRG – which is trying to cultivate a strong relationship with Turkey – has struggled to keep the militants under control.

"If it’s not the same situation as Iraq, with a separate government, I will not go back… Until Syrian Kurdistan is autonomous, it will be more of the same."

Making matters even more complicated, the KRG has been training Syrian Kurds to defend their land in Syria in the event of a security vacuum if Syrian President Bashar al-Assad is ousted from power. This has left aid workers worried that the camp could similarly become politicized.

UNHCR says the single men arriving in Domiz left Syria because they had defected from the army, feared military recruitment or were wanted for participating in protests. UNHCR screens them case by case and has found that they meet the definition of a refugee.

“There is this whole issue of the demographics - who is coming in - and this huge concern over the single [men],” said Aurvasi Patel, UNCHR’s assistant representative for protection in Iraq. “But by and large, they are people of concern to UNHCR. We have no indication that they are carrying arms, or belong to any armed group, but we are monitoring the situation.”

Hamo, of the government’s displacement department, acknowledged the refugees represented a range of interests, saying they could be linked to the PKK, the Syrian regime or the fight for Kurdish autonomy. He said KRG has learned from past experiences hosting Turkish refugees linked to the PKK, who drew the KRG into conflict and caused security problems for the region.

“From the humanitarian side, because we are in an emergency, we are receiving the [refugees],” Hamo told IRIN. “But if it reaches a level that jeopardizes the security of the region, then we will have a different approach.”

“As far as we’re concerned, the important thing is for the problem to be resolved,” Minister Falah said, “because the final solution is where people would be back in their homes.”