Across the road from Maiduguri railway station, in the corner of a now abandoned property, a leafy neem tree provides a canopy for the remains of a mosque flattened by the Nigerian army.

The mosque had belonged to Jama'atu Ahlis Sunna Lidda'awati wal-Jihad (People Committed to the Propagation of the Prophet's Teachings and Jihad), better known as Boko Haram - loosely translated from Hausa, the lingua franca of northern Nigeria, as "western education is forbidden".

Its destruction followed coordinated attacks by Boko Haram militants against police stations and government buildings in four northern states in July 2009. After several days of fighting, more than 800 people were dead, including the Salafist group's leader, 39-year-old cleric Mohamed Yusuf, killed while in police custody.

Boko Haram's revenge was dramatic. Seen initially as an insular local sect - one of many in the north - it reached out of Borno State, on the fringes of the Sahel, to bomb the Nigerian capital, Abuja, and make common cause with the global Jihadist movement. Western governments are scrambling to provide counter-insurgency training to confront the group, which views the Nigerian state as illegitimate, and demands Sharia law even in the southern half of the country where the majority is non-Muslim.

There is a heavy security presence in Maiduguri, the northeastern city where Boko Haram began, in a region that has been a centre of Islamic learning for centuries. But the militants are seen as faceless and ruthless, easily able to outwit the Joint Task Force (JTF), a federal unit comprising army, police and customs officials, who make up for their lack of operational intelligence with a wholly counter-productive willingness to use lethal force.

"Almost everybody is affected in this town, either directly or indirectly by the violence," said a medical doctor, who, like almost everyone IRIN spoke to, asked not to be named. "The soldiers don't discriminate, don't define who is the enemy, and we don't even know if they are protecting us or intimidating us."

The large Christian community takes a different view. There are three bullet holes in the signboard of the Church of the Brethren, next to a sand-bagged emplacement manned by soldiers. Assistant Pastor Joshua Bulus acknowledges the excesses of the JTF, but reasons: "If the soldiers were removed from the state, this church wouldn't be here." It is one of 11 that have been attacked in Maiduguri since 2009, although it is not clear all the violence has been the work of Boko Haram.

Yusuf founded Boko Haram in 2002, but the philosophical roots of the movement stretch much further back. British colonial rulers had conspired with Nigeria's northern aristocratic establishment to keep missionary schools out of the north; the schools that did exist were met with antagonism and labelled Boko - literally "deception", seen as a means to convert Muslim youth. Yusuf's followers do not reject education per se, only the parts of the curriculum - such as evolution - that do not correspond with the Koran.

But there is an enduring distrust of western education. Today, out of choice, millions of northern children are still schooled under the Almajirai system, attached to a Koranic teacher (with possibly only a shaky understanding of the text) to learn by rote for years. The children support themselves and their mentor by begging, a mendicant tradition prone to abuse, and which, according to analyst Innocent Chukwuma of the Cleen Foundation, has left the north educationally disadvantaged.

There has historically been a counter-argument to Boko Haram from within Nigeria's Islamic traditions. The 19th century jihad by the Dan Fodios, who conquered the north, aimed for enlightened Islam and replacing the region's corrupt potentates with the rule of scholars. Two hundred years ago, in an echo of the current debate, Abdullahi Dan Fodio was chastised in verse by a man from Borno for allowing women into education. He replied in the same meter and rhyme that ignorance was the greater evil.

Politically there has also been a tradition of northern progressive movements that up until the 1980s championed the rights of the "talakawa" (commoners) against a feudal conservative establishment seen as responsible for their poverty. There is no longer a secular alternative voice to Nigeria's money-grubbing, vote-fixing, political system. The northeast region is Nigeria's poorest. The literacy rate for women in Borno is just 12 percent, immunization coverage for children aged 12-23 months a minuscule 2 percent.

"It is this vacuum created by the neutralization of progressive forces that extremist cults are now seeking to fill," writes Nigerian analyst Chris Ngwodo. "It is their advocacy of the cause of the poor and their opposition to social injustice that lends these groups their appeal."

Signs pointing to the assortment of indigenous churches in Jos's Christian neighbourhoods, Jos, Nigeria, 4 April 2007. Plateau is in the so-called Middle Belt region of Nigeria, and its inhabitants are mainly Christian or animist minority groups living al 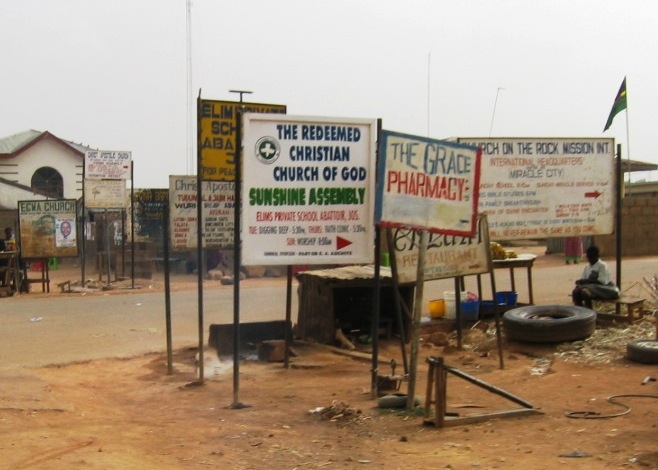 The hereafter can have a fatal attraction if you are poor: "The first suicide bomber [responsible for blowing up the UN building in Abuja on 26 August 2011] was a roadside mechanic - he left five million Naira [US$31,000] to his family," one state-employed worker told IRIN. And for believers, the promise of an authentic, egalitarian Sharia law (as opposed to the elite-serving "political Sharia" introduced by 12 state governors) is the antithesis of the immorality and dysfunction of the Nigerian state, loathed by so many of its citizens.

Boko Haram's revivalist message resonates at the grassroots in a country where religious fundamentalism in general is on the march. "Before the violence, people liked the way they worshipped," a university student in Maiduguri told IRIN. She added: "They are not corrupt, they don't tell lies, they're sincere, and they don't fear anybody."

As Boko Haram's populist support grew, so did their intolerance of criticism, even when it came from leading Muslim clerics. The propensity for violence cowed more learned and moderate voices: "Anybody who comes out against them they kill," one lawyer explained.

Boko Haram has played a role in Borno's murky and thuggish party politics, despite the group's rejection of the Nigerian political system. According to political analyst Hussaini Abdu, former state governor Ali Modu Sheriff allied himself with the group for political advantage, appointed an influential member Buju Foi as his commissioner of religious affairs in 2007, only to fall out with them after Foi resigned. Intimidation by the state authorities, which also avoided calling for federal help, led finally to the events of July 2009.

The head of Boko Haram now is Abubakar Shekau, generally regarded as more radical than Yusuf. With identity politics and communal frictions in Nigeria's northern cities and the Middle Belt erupting in regular and terrible violence, his message is that Boko Haram will protect Muslims everywhere. IRIN has seen a video in which Shekau intones over images of burnt and swollen corpses that the Nigerian state is complicit in the repression of Muslims, although the death toll in the tit-for-tat violence is far from one-sided.

"This is something new, they want to be seen as the champions of Muslims. Shekau delivers brilliant poetry on how Muslims are repressed and are the victims of the Nigerian state, but it's to mobilize support and get the radical youth to join them," said Abdu.

President Goodluck Jonathan, a Christian southerner, won a bitter election contest in 2011. Many in the north argued that it was a northerner's turn (his predecessor, Musa Yar'Adua, died in office in 2010 before the end of his first term). The conspiracy theorists mutter that Boko Haram is deliberately cultivated by politicians to pressure the Jonathan administration, and forestall any thought he may have of extending his term in office.

"If you approach security from this perspective [this crisis] is going to consume you," said Abdu. "You are not going to win allies because you behave subtly or openly from this warped theory. You have to deal with this problem in a very strategic and sophisticated manner."

Shehu Sani of Nigeria's Civil Rights Congress was part of a peace initiative by former president Olusegun Obasanjo to reach out to Boko Haram. He believes that despite the group's radicalism, a settlement is possible. According to Sani, the main demands are for the release of all their members in detention, compensation for those killed (including those slain extra-judicially by the police), and the rebuilding of their mosques and houses.

There is support in Nigeria for negotiations. According to a survey in August by the Alliance for Credible Elections and the Cleen Foundation, 58 percent of Nigerians want dialogue. When disaggregated by region, support in the northeast was overwhelming, with 80 percent favouring talks.

"Obasanjo took the demands of Boko Haram to Jonathan, but it's clear that President Jonathan believes more in the use of force," said Sani. "For now the links are down between the security agencies and the group."

With Boko Haram's Jihadist credentials burnished by the UN bombing in August that killed 23 people, Sani foresees greater links to Al-Qaeda in the Maghreb, as the Boko Haram leadership shura floats between Chad, Niger and northern Cameroon. There is real concern that weapons from the Libyan conflict will inevitably funnel south.

Chukwuma of the Cleen Foundation contrasts the lack of dialogue to the approach the Yar'Adua government - in which Jonathan was vice-president - adopted for the militants in the Niger Delta, who were offered amnesty and cash payments. "Speak to any northern leader and everybody is saying dialogue, respond to their requests like was done in the Delta. But I'm not seeing any interest on the part of the government to protect those [leaders] who will work with them."

He fears that given the disconnect between the state and its citizens, the lesson for other groups with a grievance is that violence pays. "There is a trend in this country in which people believe that taking up arms is the only way they will be listened to and their issues resolved... There are other groups waiting in the wings."