Ongoing wrangling over vital waterways that pass through China and India – the two most populous countries in the world – could lead to agricultural devastation further downstream in Bangladesh, experts warn.

The Ganges, Brahmaputra and Meghna rivers - together one of the largest freshwater flows in the world - pass through Bangladesh on their way to the ocean, but the rivers’ catchments are outside the country, leaving the impoverished nation to rely on neighbours to allow water through.

However, with neighbours under pressure from population and economic growth looking to their own water and hydro-energy needs, Bangladesh is suffering.

“The loss of the Himalayan ice pack means China and India are going ahead with plans to dam, and decrease water supply to Bangladesh,” Luby said. “That puts a country that is already vulnerable in a worse position. In Bangladesh, more than 80 percent of the water used is used in agriculture.”

Bangladesh first felt the impact of disrupted flow from the Ganges in 1975 when India built the Farakka barrage, which led to an almost 50 percent drop in dry season flow.

Now India, with a population of1.1 billion that is expected to swell to more than 1.5 billion in the next four decades, plans to construct another large dam that will block a significant portion of downstream flow from the Meghna.

On top of that, China with plans to divert water for its own use from the Brahmaputra, which accounts for 71 percent of the water in the Ganges delta, said Ahsan Uddin Ahmed, of the Ministry of Water Resources.

“If somebody diverts the main flow and takes the water away, then a major ecological catastrophe will take place in this delta,” said Ahmed, who is executive director of the centre for global change in the ministry’s Water Resources Planning Organization (WARPO). “It’ll have a tremendous adverse implication on Bangladesh.”

According to World Bank and UN estimates, China’s population of more than 1.3 billion is expected to grow by about 70 million by 2050. While its projected population growth rate is lower than India’s, its GDP has skyrocketed at 10 percent or more annually over much of the past two decades.

Rabin Das, 38, a paddy farmer in the village of Naya Para, Barguna District, lost his entire crop when Cyclone Sidr struck Bangladesh on 15 November. More than 3,000 people were killed and millions left homeless in the disaster. 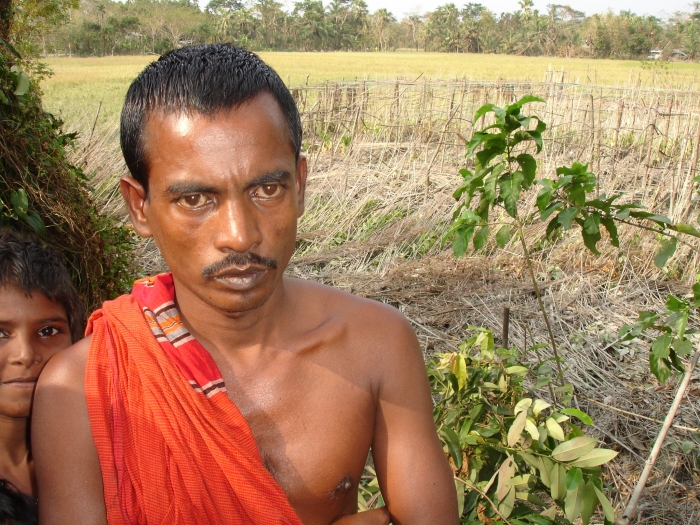 Many of Bangladesh’s aquifers have become contaminated with arsenic,  making them dangerous for human consumption. Surface water is also heavily contaminated, while the recharge rate on deep, underground aquifers is too slow for them to be a viable alternative.

Ahmed said that with too little water, agricultural production drops, causing a rise in local food prices and seriously impacting a country where the UN estimates 50 percent of the population live on less than a US$1 a day and 46 percent of children are malnourished.

Bangladesh already faces water shortages because of severe drought in the north.

“Part of the northern region is facing desertification. There is a huge shortage of irrigation facilities,” she said. “Because of the unilateral withdrawal of water by India, major rivers have silted up. These rivers have died. Salinity is spreading because there is no water coming from upstream to push the seawater back.”

Increased salinity has caused groundwater problems and led to a drop in agricultural production in the southern coastal regions, where farmers once relied on the Ganges during the dry season for their water-dependent rice crops.

“When the water became saline and there wasn’t enough water coming from upstream, people had to forfeit the most important crop and gradually they picked up less economically important crops, so their whole livelihoods changed,” said Ahmed from WARPO.

Ahmed warns that it will probably become ecologically impossible for people to live or maintain livelihoods in the southwest of Bangladesh.

With these ongoing water disputes, Bangladesh is having a hard time pushing back against India - its powerful neighbour that helped Bangladesh become independent in 1971.

“It’s a difficult situation because India is a large country,” said Adilur Khan, secretary of human rights NGO Odhikar. “At the official level, India is a big brother that puts pressure on its small neighbours.”

The sharing of the Ganges' waters remains a long-standing diplomatic issue between India and Bangladesh over appropriate allocation and development needs.

With no end in sight to the dispute, experts agree that it will be essential to hold multilateral talks between India, Bangladesh, China, Bhutan, Nepal - the five neighbouring countries that contain the Ganges-Brahmaputra-Meghna basin.