Vibrant murals on squat walls bear reminders of revolution, resistance, and the communist symbols these former Colombian guerrillas once fought for – that is until landmark peace accords brought them to settle here in this pop-up village.

Agua Bonita, on a small plateau on the edge of the Amazon Basin, buzzes with trucks from major aid organisations and busloads of school groups visiting the thriving camp – a poster child for success in an otherwise stalled and patchy rebel reintegration process.

It is seen as the most successful of the 24 sites the Colombian government developed to resettle thousands of former fighters from the Revolutionary Armed Forces of Colombia, known as the FARC, when the group demobilised after the 2016 peace treaty.

Down a rocky road, through a river bed, and past a collapsed bridge an hour’s drive from Florencia, a city of 170,000, the community has a library with 12 computers, a restaurant, a bakery, a sparse general store, a community centre, even a daycare for toddlers.

While similar camps remain mired in underdevelopment, struggling to plan towards economic goals and quickly losing residents, Agua Bonita seems to represent Colombia’s greatest hope for a peaceful and prosperous reintegration of the FARC, which helped wage a 50-year civil war that left more than 200,000 people dead.

From fighters to farmers

The former rebels at Agua Bonita now farm five hectares of pineapple cash crop and have their own basic processing plant for fruit pulp. They also have four 13-metre-long fish tanks, a massive hen house, and dozens of large communal gardens.

As government subsidies are set to expire next summer, this reintegration project has gained momentum towards self-sufficiency in ways most of the others never did.

Read more → In Colombia, the ex-rebels choosing peace but struggling to go it alone

Aid workers credit this success to strong leadership, well-developed administrative structures, and the initial boldness of more than 200 ex-rebels to pool their cash payouts from the peace accords and buy 169 hectares for their homes and community projects.

“They really have a vision,” said Alfonso Henriquez, local director for Colombian NGO Red Adelco, as beside him a camp leader, Federico Montes, made calculations to determine profits they could make from pineapples, whole versus pulped.

“We just invented this methodology,” said Montes, 39, the former FARC combatant appointed as head of the eight-person board that oversees the commune’s social and economic planning and external communications.

The collective pools resources and labour. An assembly of 21 administrators meets once a month, and the whole community convenes every two months to coordinate future projects. 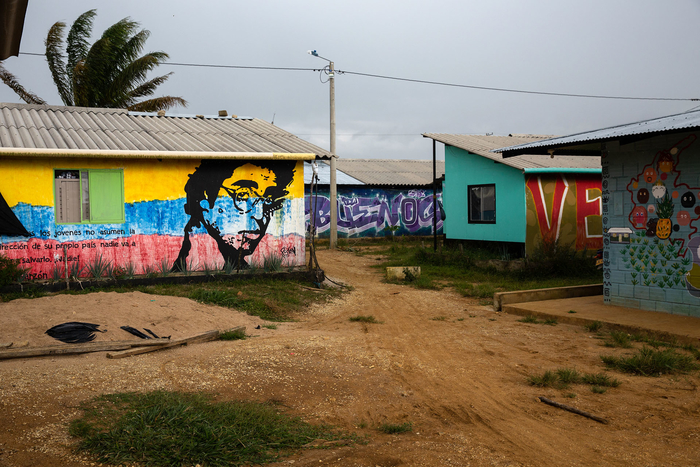 Dylan Baddour/TNH
Political murals cover the walls of the community, including this portrait of slain journalist and Colombian leftist icon Jaime Garzon.

For now, they still rely on free utilities and government subsidies – about $200 and a box of various grains and vegetables each month. But in August 2020, when the subsidies end, the stilts will come off and the village will have to support itself.

Ex-FARC fighter Yasleydy Guerrero, 42, said she starts her day at 4am to feed her chickens and care for her onions, yucca, plantain, cilantro, and other crops. By day she works the general store and by night she studies for an advanced high school degree.

Guerrero said it’s worth it because successful camp life has already allowed her to realise her dream of starting a family. She and another former guerrilla have now settled down in a two-room house and have a baby. “It was such happiness,” she said. “No more hiding.”

Guerrero grew up with 12 siblings. Her parents farmed most of their food in an isolated village that drew its water from streams. She said she joined the FARC at 23 to earn her daily meals and to battle the army and paramilitary groups on behalf of “millions of poor families”.

For 17 years she lived in the jungle, until in 2016 her commander told the troops that the peace treaty had been signed, the war was over, and the government they had battled for generations was going to give them homes and help them start farming.

When the former FARC fighters first arrived in the empty field where Agua Bonita now stands, they set up tents and worked alongside government construction crews for six months to build 60 houses with fibreglass walls, which they later replaced with bricks.

Their first pineapple crop was guided by YouTube tutorials. Later on, they bought seeds from local farmers who came to teach them large-scale production.

Some communal buildings, they built on their own, others with help from the Portuguese Camões Institute, the UN Development Programme, and the Red Cross. The pulp processing plant was donated by Red Adelco, which is funded through the peace process by the EU.

Luis Vargas, a coordinator with Red Adelco, said the abundance of international aid here – the World Food Programme buys some of the harvest, the UNDP consults on development plans, and the Red Cross comes by for periodic medical clinics – is because the community demonstrated it could make projects work through competent administration and planning.

“The families here really want to commit to this new life in peace, so they deserve every assistance we can offer,” said Ana Maria Velasquez, a Red Adelco worker who grew up in the region. “People here believe that it is possible.”