Children's laughter rings out from bamboo huts along the perimeter of the Lana Zup Ja camp for internally displaced persons (IDPs) in a part of Myanmar’s Kachin State controlled by the Kachin Independence Army (KIA): A group of pre-schoolers are playing in a plywood hut, seemingly oblivious to the squalid conditions surrounding them.

The playground-cum-learning centre is one of six new “child-friendly spaces” that local NGO Wing Pawng Ningthoi (WPN) has built in IDP camps in Kachin State.

“Most of the children come from conflict zones, but when we ask them about their experiences, many of them don’t know how to answer and just stare in silence,” WPN’s Mary Tawm, who oversees food and shelter assistance for about 10,000 IDPs in six camps controlled by the KIA, told IRIN.

But these children are also the lucky ones.

"Thousands of children have been affected by the conflict in Kachin State,” said James Gray, a child protection specialist for the UN Children’s Fund (UNICEF).

While the agency had been able to provide support and assistance to separated and unaccompanied children and those in need of psychosocial support over the past 18 months in government-controlled areas, he said, “UNICEF is concerned about the situation of children in the non-government controlled areas, where access is difficult, and children are without child protection interventions.”

“The children’s [psychological] needs are not being met because these are the kind of things that are secondary to food and shelter,” said Oddney Gumaer, international advocacy director of Partners Relief and Development, one of the few international NGOs to gain access to KIA-controlled territory.

“In the Western world when there is a crisis or disaster there are psychologists and crisis teams at the location almost immediately and we get all the needed follow-up right away. But for these people there is no support like that,” she explained.

A group of children at the Lana Zup Ja IDP camp in Kachin State. Thousands of children have been affected by the conflict 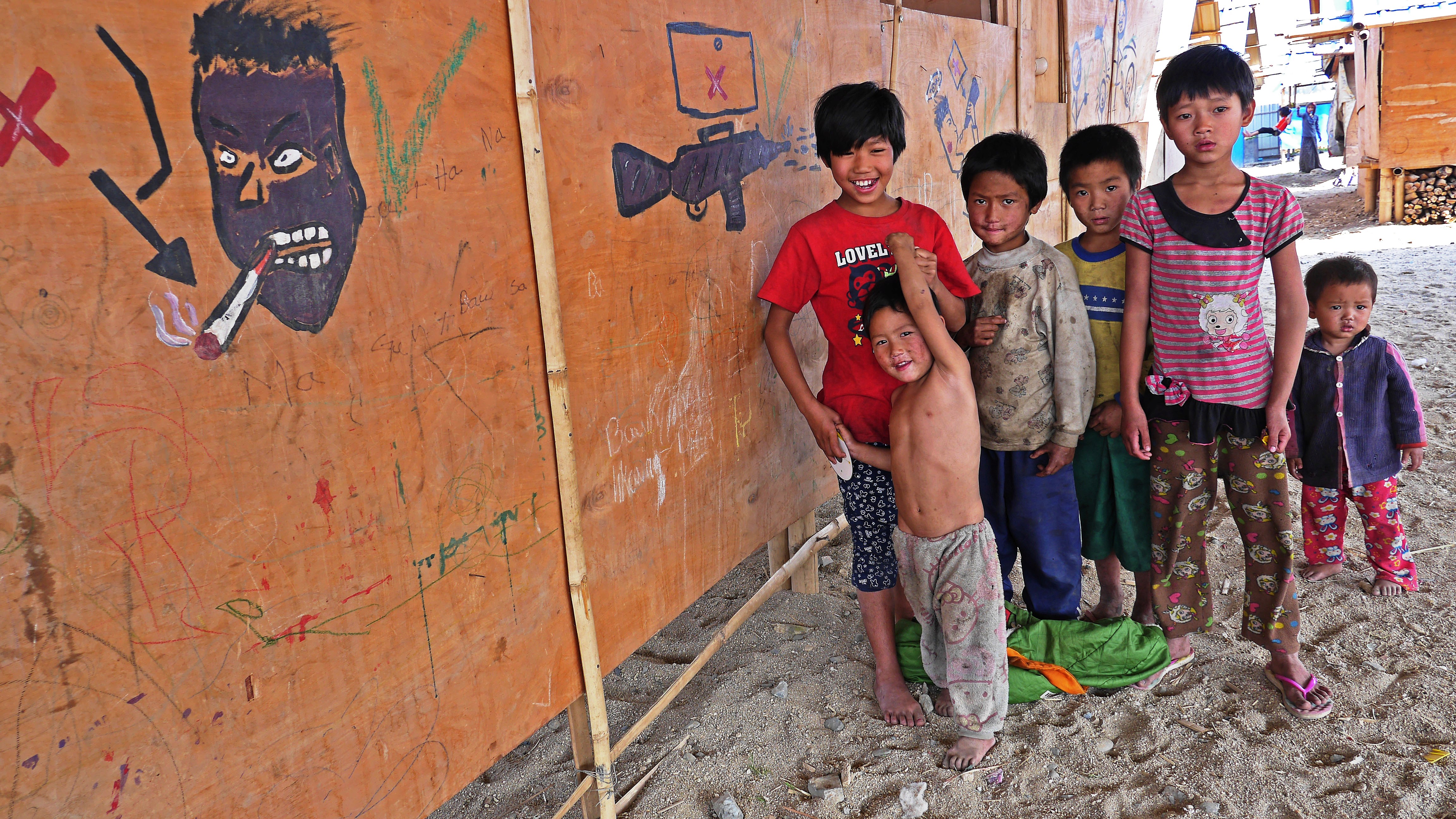 The children were displaced, like thousands of others, after a ceasefire between the Burmese government and the KIA collapsed in June 2011. Many are traumatized, having witnessed acts of violence.

According to the UN, over 83,000 residents are displaced in Kachin State, including 47,000 (56 percent) in KIA-controlled areas. This number, however, does not include those living with host families or the many who fled to neighbouring Shan State.

Many of the IDPs have been displaced for a long time, some for over 20 months, triggering renewed and additional needs for basic services and protection, the UN Office for the Coordination of Humanitarian Affairs said in its most recent humanitarian update.

To help provide support for children in KIA-controlled areas, WPN is working with local workers from Save the Children in the six centres, and hopes to follow up with more assistance in future.

“Providing a protected environment where children can engage and participate in activities and interact in a more normal situation where they are protected from physical harm is key,” said Kelly Stevenson, Save the Children's Myanmar country manager.

The pre-school set-up provides more of a group learning environment - similar to a classroom - to help many of the children build up their self-esteem and confidence, Stevenson explained.

To help bring more awareness of children's basic rights, WPN has also organized several workshops for staff and volunteers, as well as camp residents. But for now, giving children the opportunity of interacting and playing together in a safe environment is proving helpful.

According to the Laiza-based Relief Action Network for IDPs and Refugees (RANIR), an umbrella group of 11 NGOs and community-based organizations working in KIA-controlled areas, the quality of the humanitarian response in areas outside government control is well below international standards due to a lack of funding and limited access.