Each one - with two rooms, two windows, a door and a small bathroom - is meant to accommodate a family.

Nizip 2 Container City is one of two new Turkish camps opened recently to accommodate the swelling number of people fleeing the violence in neighbouring Syria. Both camps reached their capacity - together, 15,000 people - within one month.

Across the border, about 50,000 displaced Syrians are living in makeshift camps, including thousands who have arrived recently due to intensified violence in al-Raqqa governorate. Most of them are waiting to enter Turkey, which says it currently accepts between 500 and 1,500 refugees per day, but struggles to find room for them.

“We don’t have accommodation capacity,” Suphi Atan, a representative of the Turkish Ministry of Foreign Affairs, told IRIN. “How can we accept them all?”

Like Jordan and Lebanon, Turkey is struggling to keep up with the increasing burden of the conflict next door. Last month, the number of refugees across the region topped one million.

By all accounts, Turkey’s camps are among the best the world has ever seen. The country has shown great generosity, spending at least $700 million of its own money - up to $1 billion, according to some estimates - to accommodate the refugees. Nearly 200,000 Syrians live in 17 camps along the border, at a reported cost of at least $1.5 million per camp per month. But as the numbers continue to grow with no end in sight, observers wonder how Turkey will keep up.

“The issue of course… and the Turks are equally concerned, is sustainability,” said one aid worker, who preferred anonymity.

Recent weeks have seen a “change in tone” in Turkey’s approach, the aid worker said.

In March, the Turkish government started registering Syrian refugees living outside of the camps, in towns and cities, to better understand their needs. It has so far registered more than 68,500, with another 33,260 awaiting registration.

In the last two weeks, it also gave the “green light” to an international NGO, the Danish Refugee Council, to begin directly assisting refugees living outside the camp - which was until now limited to ad-hoc assistance by local NGOs.

UN agencies are also increasingly active inside the camps. For example, a joint World Food Programme/Turkish Red Crescent food voucher programme allowing refugees to buy groceries using credit on electronic cards has expanded to Harran and Hatay camps, and will double its beneficiary caseload by mid-April. The government wants the programme extended to all camps as soon as possible, but WFP does not currently have adequate funding to do so. 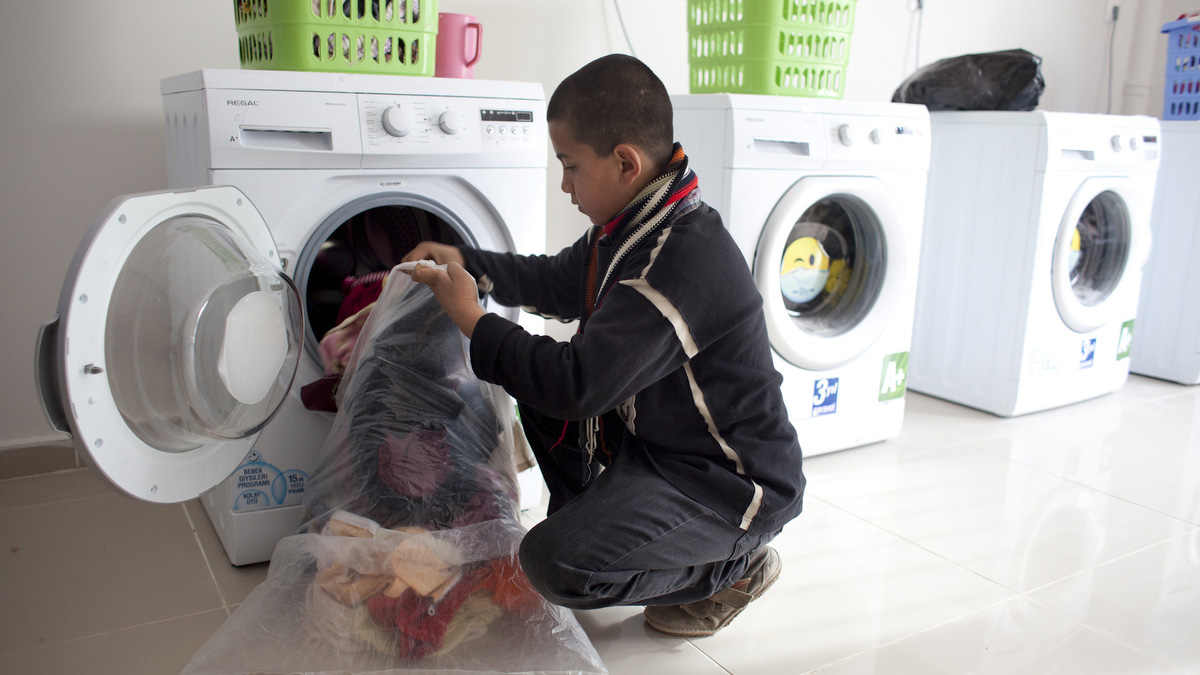 AFAD, the disaster and emergency management unit at the prime minister’s office, has also signed agreements with other UN agencies, including the UN Refugee Agency (UNHCR), to provide humanitarian aid and services to the refugees.

This month, Turkey also adopted a new law on asylum, which will introduce for the first time in Turkish history a legal framework for refugee issues in the country.

Turkey’s refugee camps, across eight southern provinces, are now home to around 192,000 people, a nearly 30 percent increase since the start of 2013. An equal number of Syrians are estimated to be living outside the camps, in apartments, unfinished houses and even sheds. In the Turkish border town of Reyhanli, a two-floor wedding hall is home to more than 700 people.

Turkey’s policy has been for those without proper documents to wait - up to four months - until space opens up in one of the camps. The elderly and injured get priority. (Syrians entering with passports are free to settle outside the camps.) Across the border, tens of thousands of displaced people live in very difficult conditions in a handful of impromptu camps that receive humanitarian aid irregularly, waiting for news of an opening.

Turkey plans to complete three more camps in the next month - Harran and Adana camps are the next ones scheduled for completion - with a joint capacity of 40,000.

The Ministry of Foreign Affairs did not respond to IRIN’s request for more detailed information about its long-term plan to deal with the influx. But according to the ministry’s Atan, Turkey expects the number of refugees in the camps could rise to 300,000 by the end of the year.

“We will continue establishing the new camps to accommodate them. But of course sending humanitarian assistance inside Syria to make them live there is preferred,” he said. The Turkish government is already providing food, tents and other items to Syrians on the other side of the border.

For Oytun Orhan, Middle East researcher at ORSAM, a Turkish think tank, the country has no choice but to maintain its “open-door” policy because any reversal would be a “total denial” of its principles.

"Our purpose is to make the sayings of Ataturk come true: Peace at home and peace in the world" – Turkish refugee camp manager

But as early as last fall, when the number of refugee was half what it is today, he told IRIN: “the cost of the Syrian visitors is getting higher and higher day by day, socially, security-wise, but also economically.”

Several aid agencies are already engaged in so-called “cross-border aid”, and many call for this to be drastically scaled up.

Turkish NGO IHH is currently proposing to Gulf donors the building of “well-organized” camps inside northern, rebel-controlled Syria - providing comprehensive services, including schools, clinics, mosques and eventually houses - to replace the current ad-hoc settlements there, which lack proper shelter from the elements.

“This is not a short-term crisis. It will be deeper and last longer,” international relations coordinator Izzet Sahin told IRIN. “Even if there is a ceasefire, even if there is a new period in Syria, it will be impossible for those hundreds of thousands of people to return to their houses because there is no house anymore. There must be at least a five-year plan to accommodate them.”

Observers say this was not Turkey’s initial assessment of the conflict in Syria.

“Turkey keeps telling itself it will all be over soon and everyone will go back to Syria,” said Hugh Pope, an analyst with the International Crisis Group.

Turkey has appealed repeatedly for more funds from donors to support its refugee response. But so far, donors have prioritized the weaker, poorer governments of Jordan and Lebanon - and even then, international funding for humanitarian aid has been limited.

Another solution would be for Turkey to lift the condition that undocumented asylum-seekers wait for space in the new camps, and that it accept more assistance from international organizations to help accommodate them.

Ahmed Fariz lost both legs fighting for the rebel Free Syrian Army (FSA). He was the sole provider for his parents, wife and two small children. He received free medical treatment in a Turkish hospital and is now living in one of 17 refugee camps in south 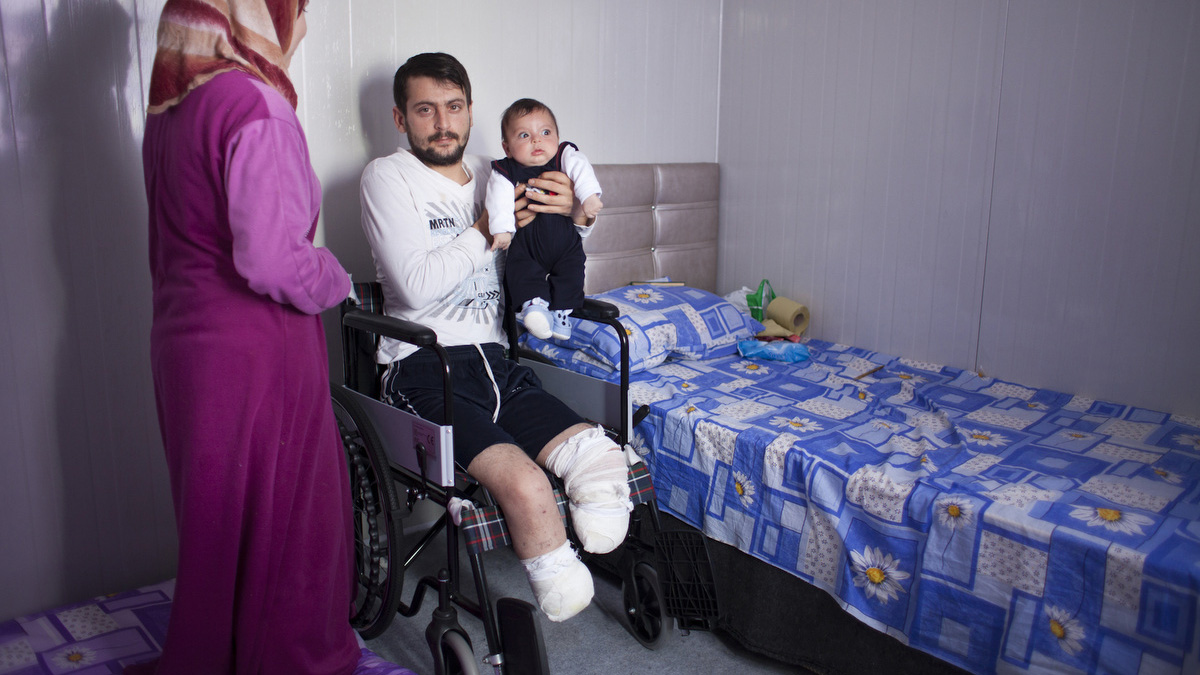 “The building of the camp is more of a technical excuse,” said another international aid worker. “If people come in, we will always be able to find solutions of where people should go.”

For now, many fleeing Syrians continue to depend on the new camps being built.

Among the new arrivals in Nizip 2 Container City is Ahmed Fariz, who lost both legs fighting for the rebel Free Syrian Army (FSA). He was the sole provider for his parents, wife and two small children. Sitting in a wheelchair, holding his smiling three-month-old son, Fariz says he was brought to the Gaziantep hospital one month ago.

The former tailor praises Turkish authorities, who he says took good care of him in the hospital and, later, in the camp, and "provided us with everything we need." The mayor of Nizip even visited him three times, he said, "and the doctors promised to provide me with artificial limbs."

A clinic is just one of many services in the camp, including cooking and laundry facilities, a TV room and a green mosque.

Saleh Al Haffez, as well as his wife, parents and five children, aged 4 to 13, are squeezed into two small rooms, but they are grateful: “The Turkish government has provided us with more than any other country has.”

Families receive mattresses, sheets, plates, pots, diapers, electric heaters and food, which comes through the Turkish Red Crescent and AFAD. At lunchtime, children carrying pots and pans queued to take lentil soup, pasta with tomato sauce, yogurt and baguettes back to their families. Eventually, the Syrians will be able to cook for themselves, camp officials said.

At the entrances to the three new school buildings are portraits of Turkey's first president, Mustafa Kemal Ataturk. “Our purpose is to make the sayings of Ataturk come true,” camp manager Cengiz Gundes said, pointing to the engraved words: "Peace at home and peace in the world."