The rain and winds signalling the start of Haiti’s storm season are already taking a toll on the makeshift shelters housing people displaced by the January earthquake, and aid agencies warn that there could be worse to come.

"Tarpaulins are generally holding up better than tents, but even the best tarpaulin or best tent is not a good place to live during the rainy or hurricane season," Timo Lüge, communications officer of the interagency group overseeing shelter, told IRIN. "Many camps get flooded each time it rains, and living conditions are dire."

Some 1.5 million displaced people are living in camps.

Aid agencies are working to build sturdier, portable housing with raised floors as quickly as possible; 1,873 of a planned 120,000 transitional shelters have been built – enough to house 9,365 people – but completing 120,000 could take about one year, Lüge said.

Funding and materials are on hand, but land tenure issues and rubble removal are hampering the process. "It will take many months to secure land, buy the required materials, transport them and finish construction," he said.

"With building materials for over 7,000 transitional shelters in country, the biggest challenge for shelter cluster [the interagency group handling shelter] members is a lack of available land on which to build," the UN Office for the Coordination of Humanitarian Affairs (OCHA) in Haiti said in its 24 May bulletin.

In the meantime aid agencies are distributing wood, nails, rope and other materials and disseminating guidance, including in a poster in Creole, on how to reinforce and waterproof existing shelters, Lüge said.

In a recent survey of 28 sites international relief agency Oxfam found that "extreme overcrowding" and poor drainage raised the risk of flooding and disease. The OCHA bulletin said there was not enough water for washing, which compromised hygiene. Cases of diarrhoeal disease were low, but skin diseases from lack of water were frequent.

'Habitation Augustin' camp for displaced families in Léogane, Haiti, just before a tarpaulin distribution organised by ACTED on 21 May 2010 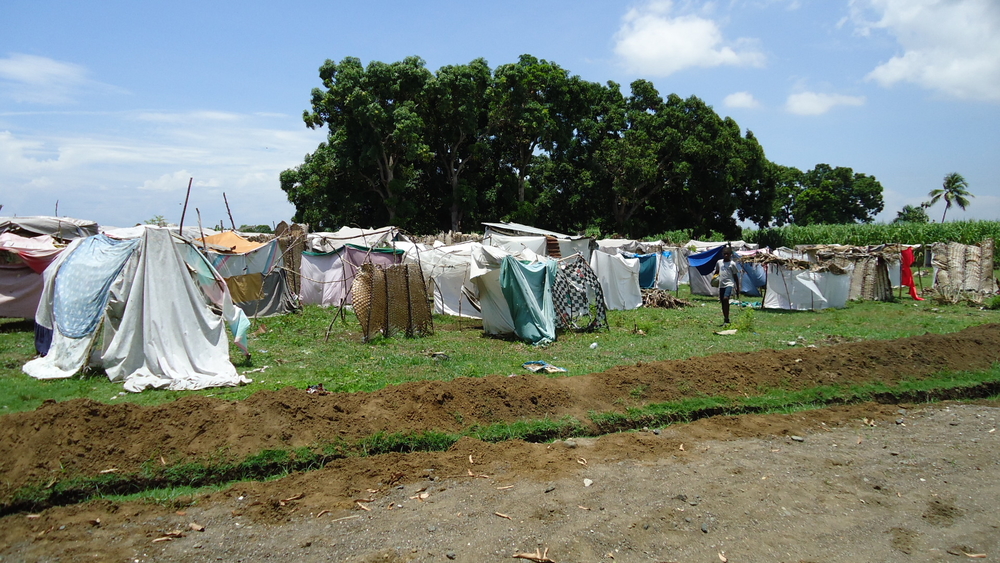 The US National Oceanic and Atmospheric Administration has predicted an "active to extremely active" hurricane season in the Atlantic Basin. OCHA said in a 1 June communiqué: "With so many people still so vulnerable after the recent earthquake, a serious hurricane this year could be devastating." Haiti's Department of Civil Defence has been identifying buildings, such as schools, that could serve as communal hurricane shelters.

Jean-Ferdinand Jean-Jacques, who lives with his wife and children in Caremaga camp, in the Maïs-Gaté 2 area of the capital, Port-au-Prince, said damage from early storms had been considerable. "Most tents are flooded as we speak; they are rotting from the bottom up. People are working on putting sandbags at the base of their tents."

Harold Desaugustes, a member of the Caremaga camp committee, told IRIN: "Already, the winds and rain have destroyed temporary shelters of people who do not have proper tents. With the storms starting, we are again exposed to catastrophe."

He said many people, including his family, live in rudimentary shelters of plastic sheeting and poles. "Sometimes, in the middle of the night, the structure crashes in from the rain and winds." He recently bought a second piece of plastic sheeting after the first was blown away by the wind.

Desaugustes's household consists of 16 people, including five children under the age of six. "We generally ask other camp residents who have tents to allow our children to sleep there – a couple of the kids here, a couple there."