For weeks, more than 100,000 civilians from the Syrian-Kurdish enclave of Afrin have found what shelter they can, making 12 formerly abandoned villages home.

Families sleep rough or in half-destroyed houses littered with hidden explosives, after fleeing a months-long push by Turkish-backed Syrian rebels to claim the city of Afrin and the surrounding area – part of a wider Kurdish enclave of the same name. Shortly after those military operations succeeded, in late March, photojournalist Afshin Ismaeli spent a week visiting Tel Rifaat (about 30 kilometres southeast of Afrin) and other villages.

Having escaped aerial bombardment and advancing ground forces, the people he encountered face new dangers: hunger, sickness, and the legacy of improvised explosive devices left by the so-called Islamic State, whose fighters once occupied the villages. Families begged him to take their children to a safe place, hoping to ensure their survival.

The UN has estimated that 137,000 people from the Afrin district have been displaced to the villages and surrounding area, including some 105,000 in and around Tel Rifaat. 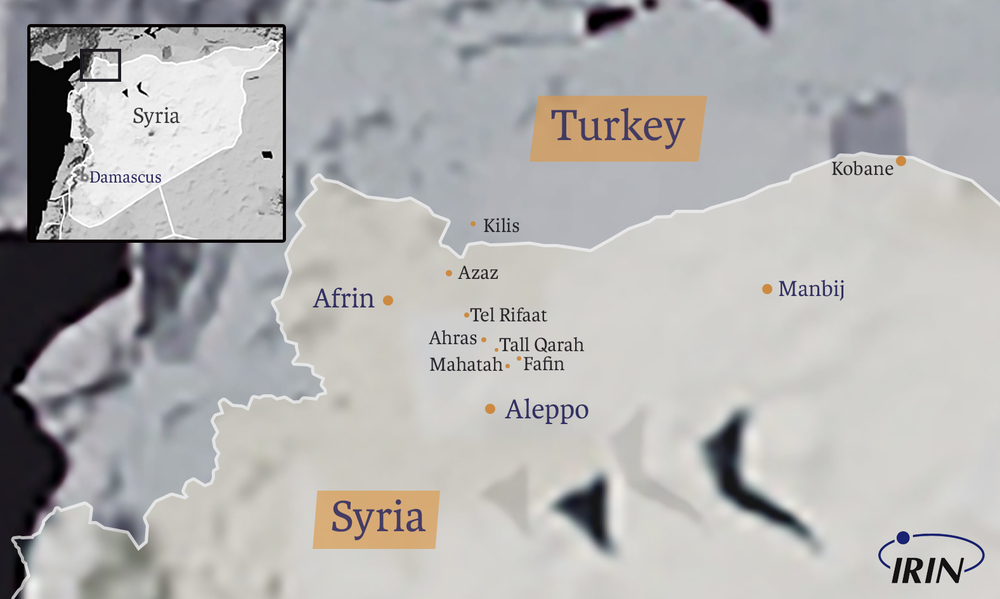 Ismaeli said he saw only Syrian and Kurdish Red Crescent volunteers providing assistance, but the major international aid organisations often distribute their aid through local partners. The World Health Organisation said it had sent four mobile health teams to Tel Rifaat and several other villages, and delivered 10 tonnes of medical supplies. The UN’s refugee agency, UNHCR, stated in a 25 March report that it had participated in an inter-agency convoy, delivering non-food items in 30 trucks.

With Afrin under Turkish-backed control and Turkey now threatening to extend its military operations, many people sheltering in the towns fear the conflict will reach them yet again. Some families are already packing, ready to flee, Ismaeli said. But with Turkish armed forces and members of the Free Syrian Army on one side of towns like Tel Rifaat and Syrian government forces on the other, it’s difficult for civilians to know where to head.

“Airstrikes destroyed our house, and then they stole everything we had,” said Arat Sik, 30, a former resident of Afrin. “We can never go back.” Worried about more airstrikes, his family is living outside, believing that is safest.

The following photographs tell his story and that of others who have taken up residence in what were, until recently, nearly ghost towns – themselves emptied of inhabitants after earlier conflicts. 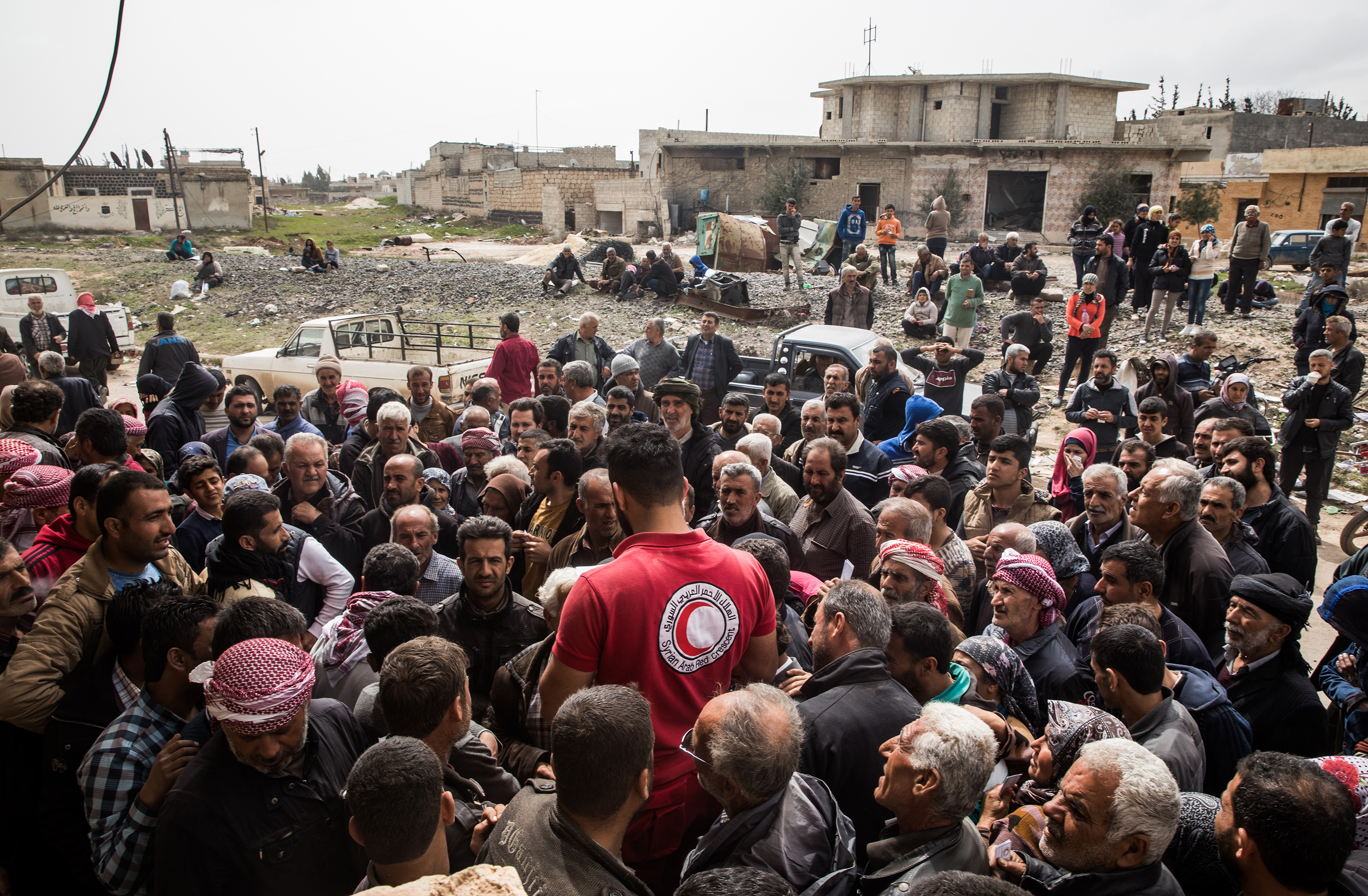 FROM GHOST TOWN TO REFUGE

TEL RIFAAT, SYRIA – An estimated 105,000 internally displaced people from the Afrin region now live in and around Tel Rifaat. “Our staff has met civilians who reported walking for 36 hours to reach safer areas,” WHO Representative in Syria Elizabeth Hoff stated in a recent report. A crowd recently gathered around a Syrian Arab Red Crescent worker to register for aid. 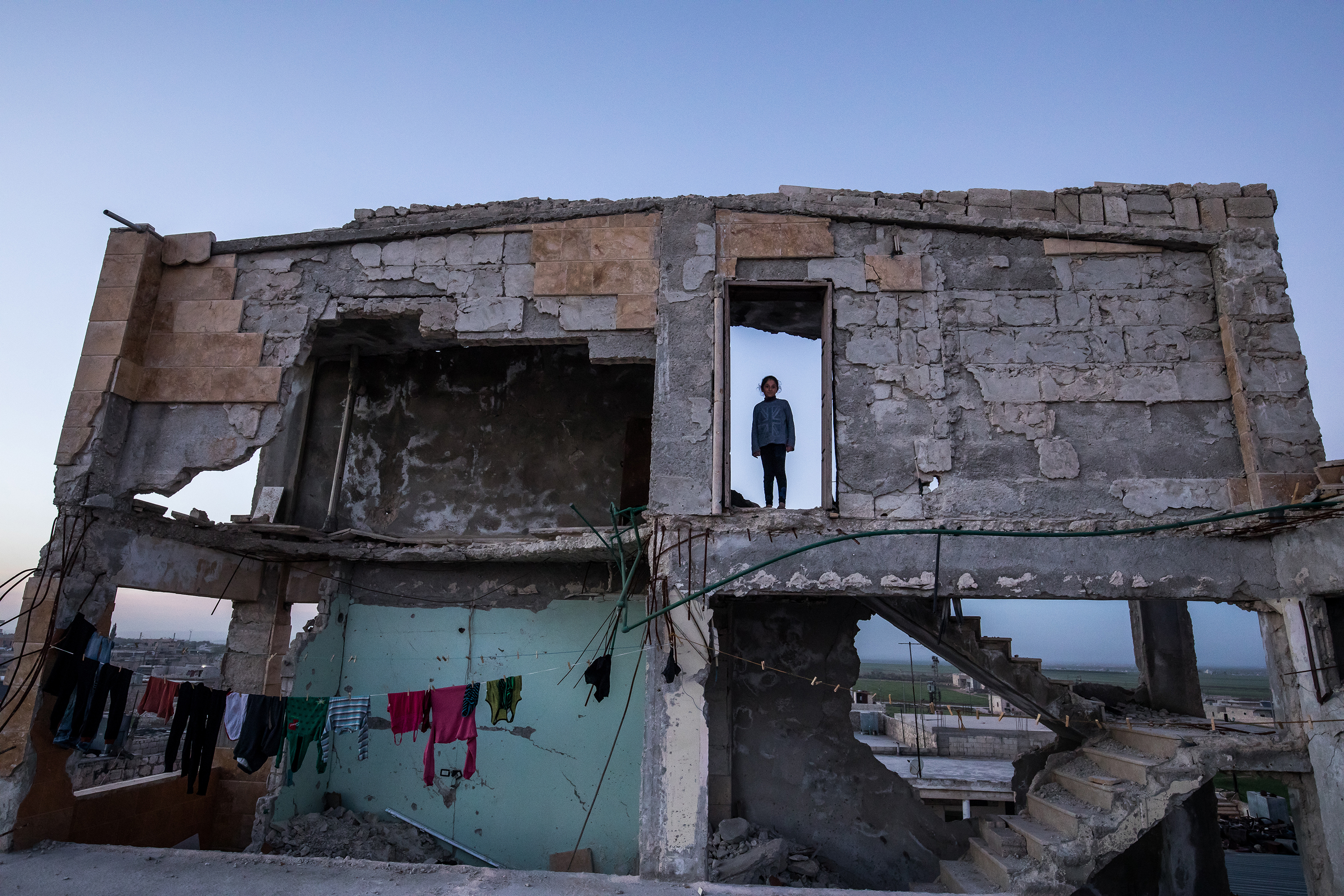 ‘WE LEFT AFRIN BECAUSE OF OUR CHILDREN’

AHRAS, SYRIA – Many people fled with children, like this girl who now calls this destroyed house home. One father of four, Rashid Ararat, 33, said: “We left Afrin because of our children. They killed a lot of people and, after an airstrike hit our neighbour’s house, killing 15 people, we knew we had to leave.” Another man, Mohamed Fill, described moving his family four times since the Turkish offensive on Afrin began. 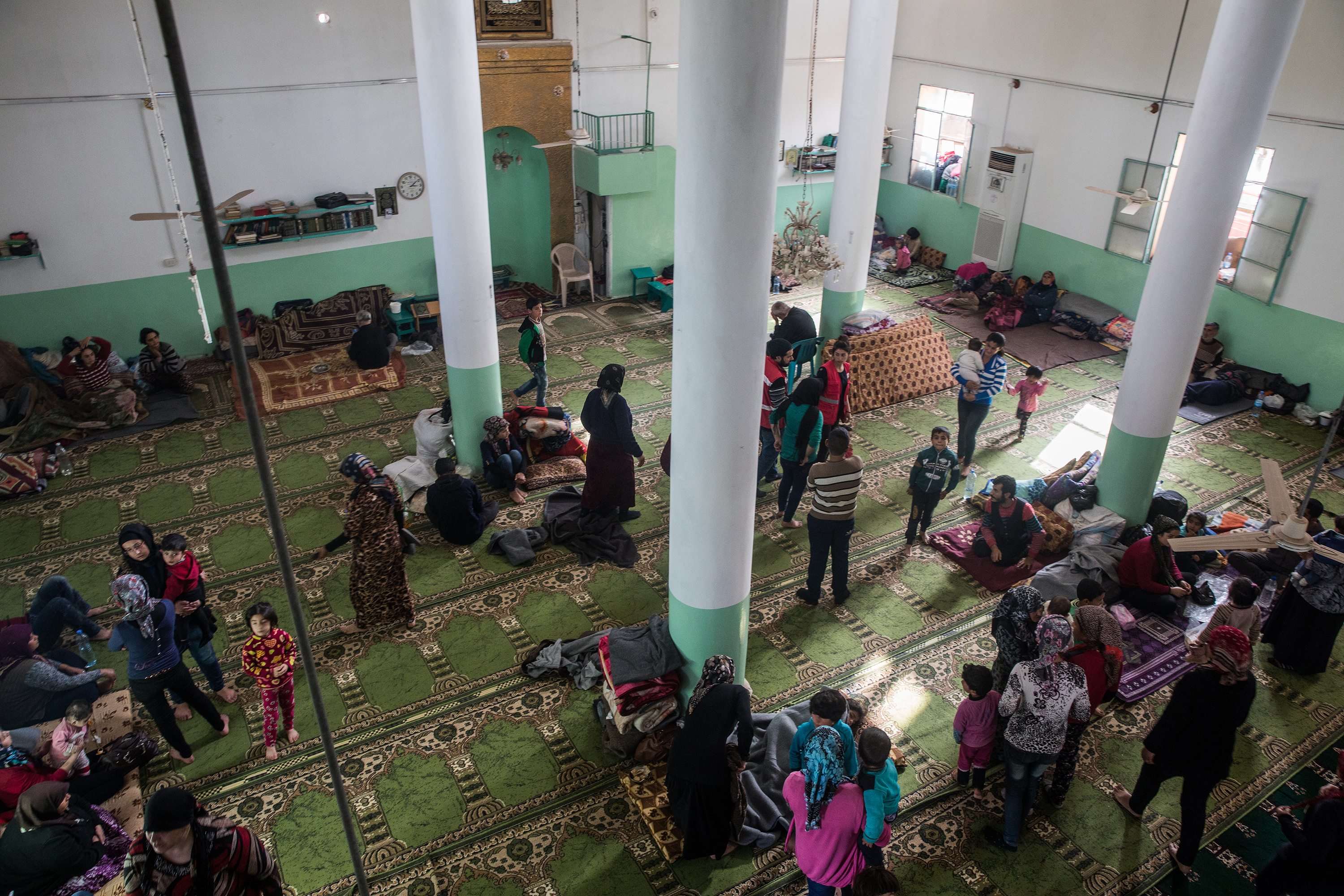 AHRAS, SYRIA – Abandoned public and religious buildings in Ahras and nearby villages now provide shelter. Dozens of families live in this empty mosque. 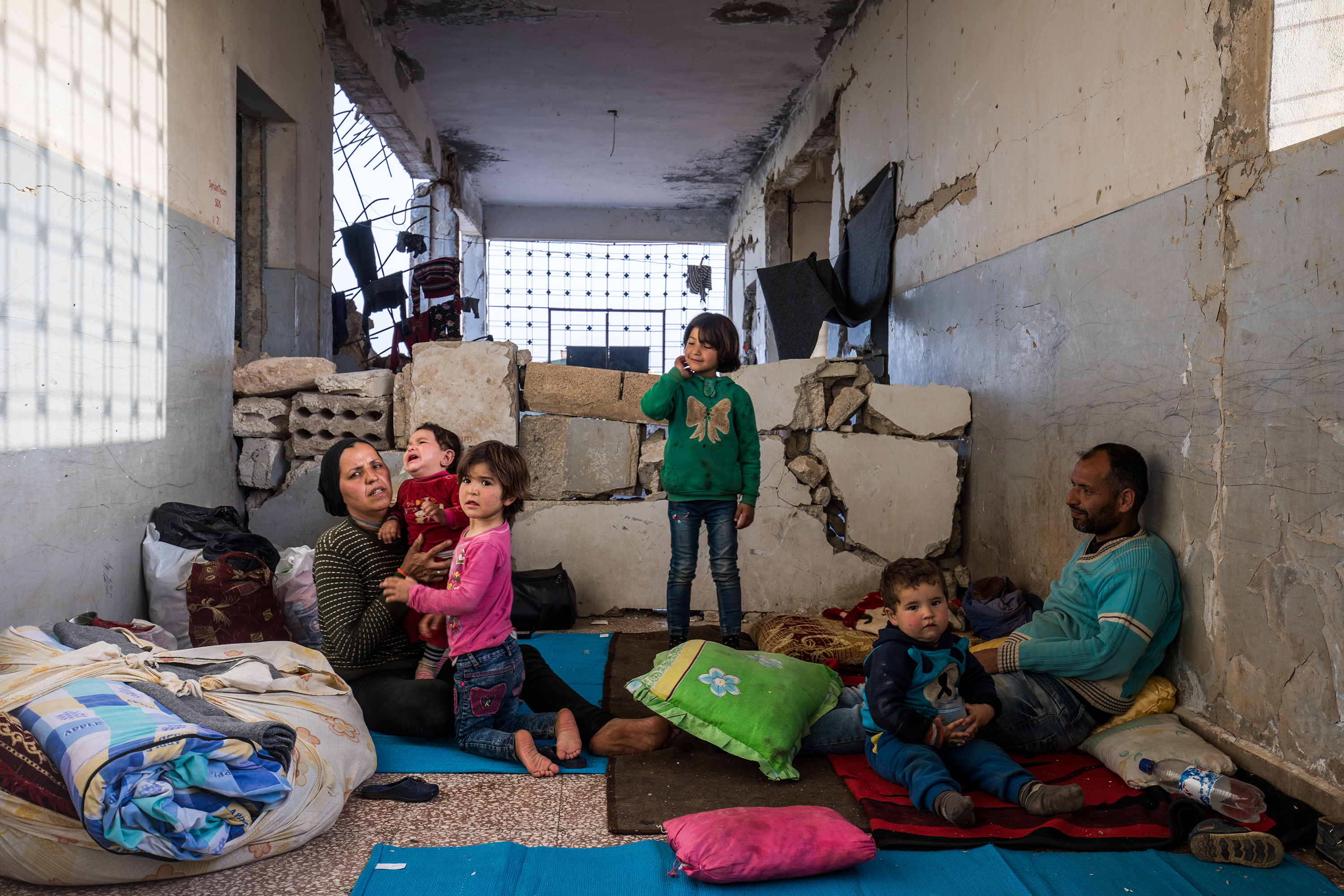 SCHOOLS, BUT NO EDUCATION

AHRAS, SYRIA – One corner of this school, destroyed in the push to liberate the town from IS, is now home to a family displaced from Afrin. 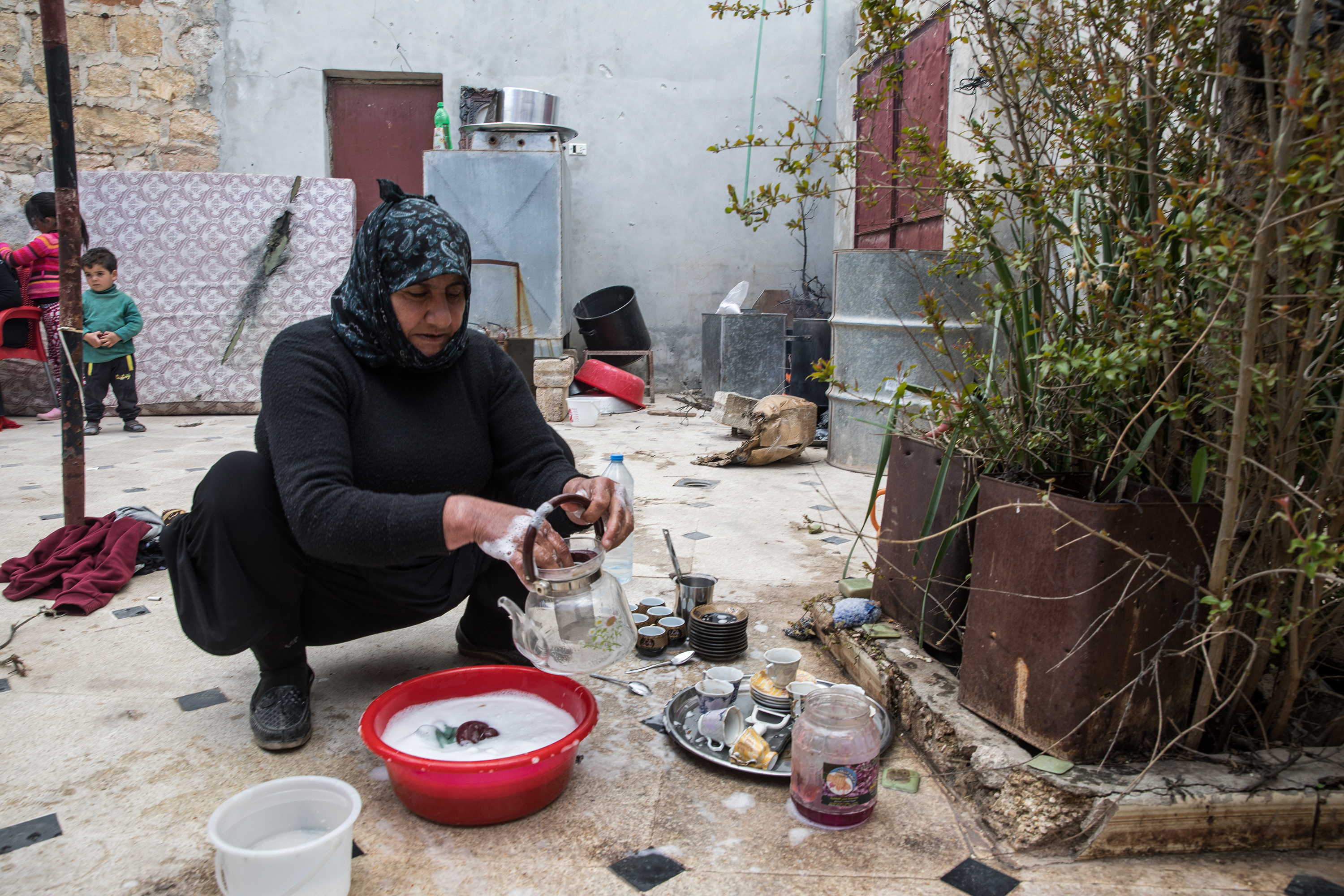 TEL QARAH, SYRIA – Suham, 55, cleaned coffee cups just half a metre away from two live improvised explosive devices, likely planted two years ago by fighters with the so-called Islamic State. Her 15-person family moved into the damaged property, around 15 km southeast of Tel Rifaat, a fortnight ago. “We think it’s okay, as long as we don’t touch them,” she says of the explosives. Such handmade explosives, wired up to ageing munitions, are likely to be extremely unstable. 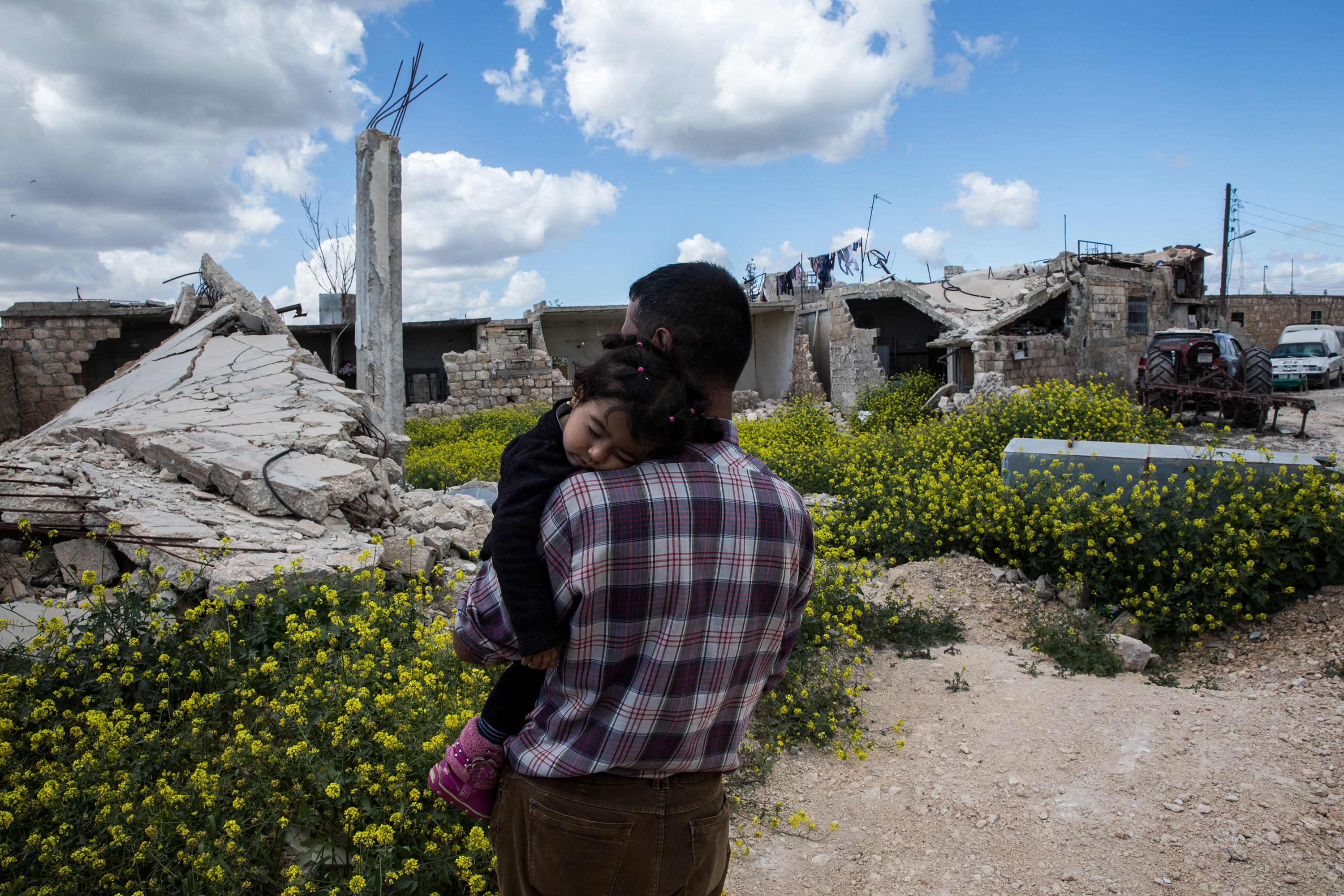 BENEATH THE FLOWERS OF SPRING, BOOBY TRAPS

MAHATAH, SYRIA – In villages like this one, where a father and his daughter stand outside their new home, spring wildflowers and other overgrowth may conceal explosives. These Kurdish-Syrian villages were liberated from the so-called Islamic State two years ago, but most former residents have not returned. The area has not been cleared of hundreds of improvised explosive devices left as booby traps by IS. Medical personnel say injuries to children and others from explosives are reported frequently, sometimes on a daily basis. 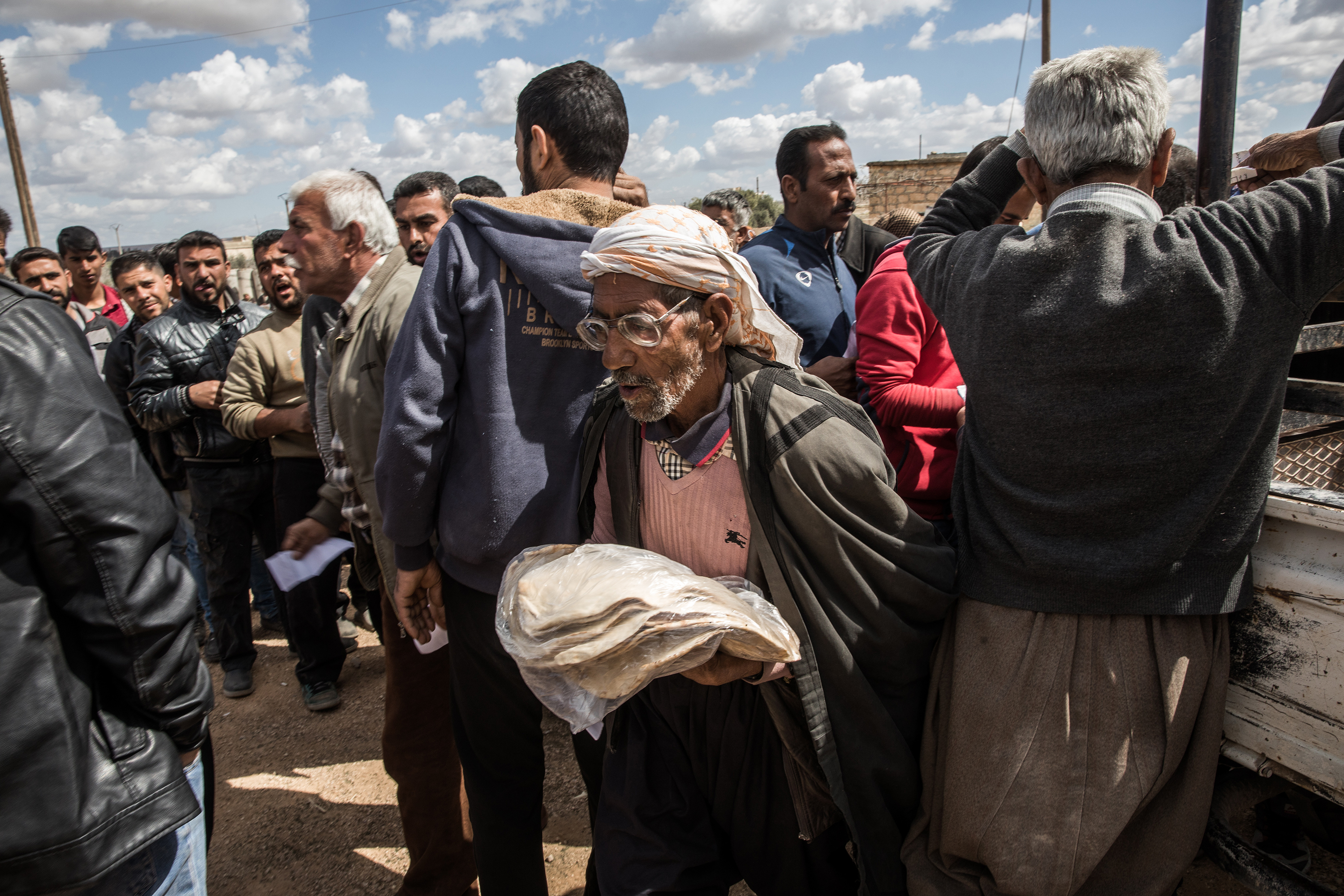 FAFIN, SYRIA – Even for those who receive bread from aid organizations, water can still be a problem. Day and night, small fires burn across the ruined towns as families try to boil unsanitary brown well water. It is likely still unfit for human consumption. 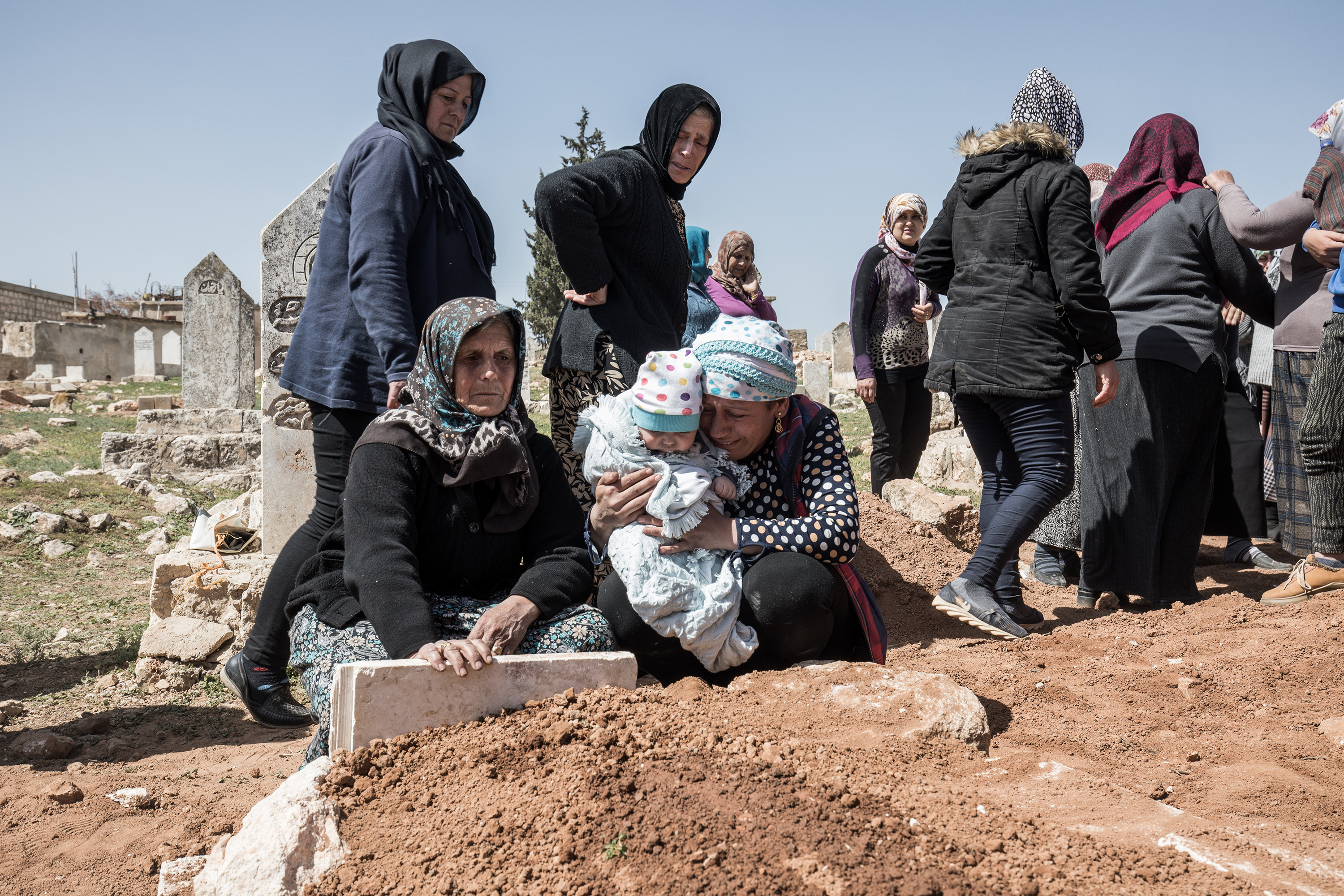 DOCTORS, BUT NO MEDICINE

AHRAS, SYRIA – A woman grieved for her husband, who she said died because he could not get medicine. Medical personnel displaced from Afrin have set up three makeshift clinics in the area, the largest of which is in Tel Rifaat. It has nine doctors and 25 nurses, but only two beds, scant surgical equipment and little medication. Doctor Azad Sabri, 49, says the clinic receives hundreds of people every day, many of whom  suffer from chest infections brought on by weeks of malnourishment and from sleeping outdoors in poor weather. “People come here every day begging for medicines, many for existing health conditions,” he said, “but we have nothing to give them.” 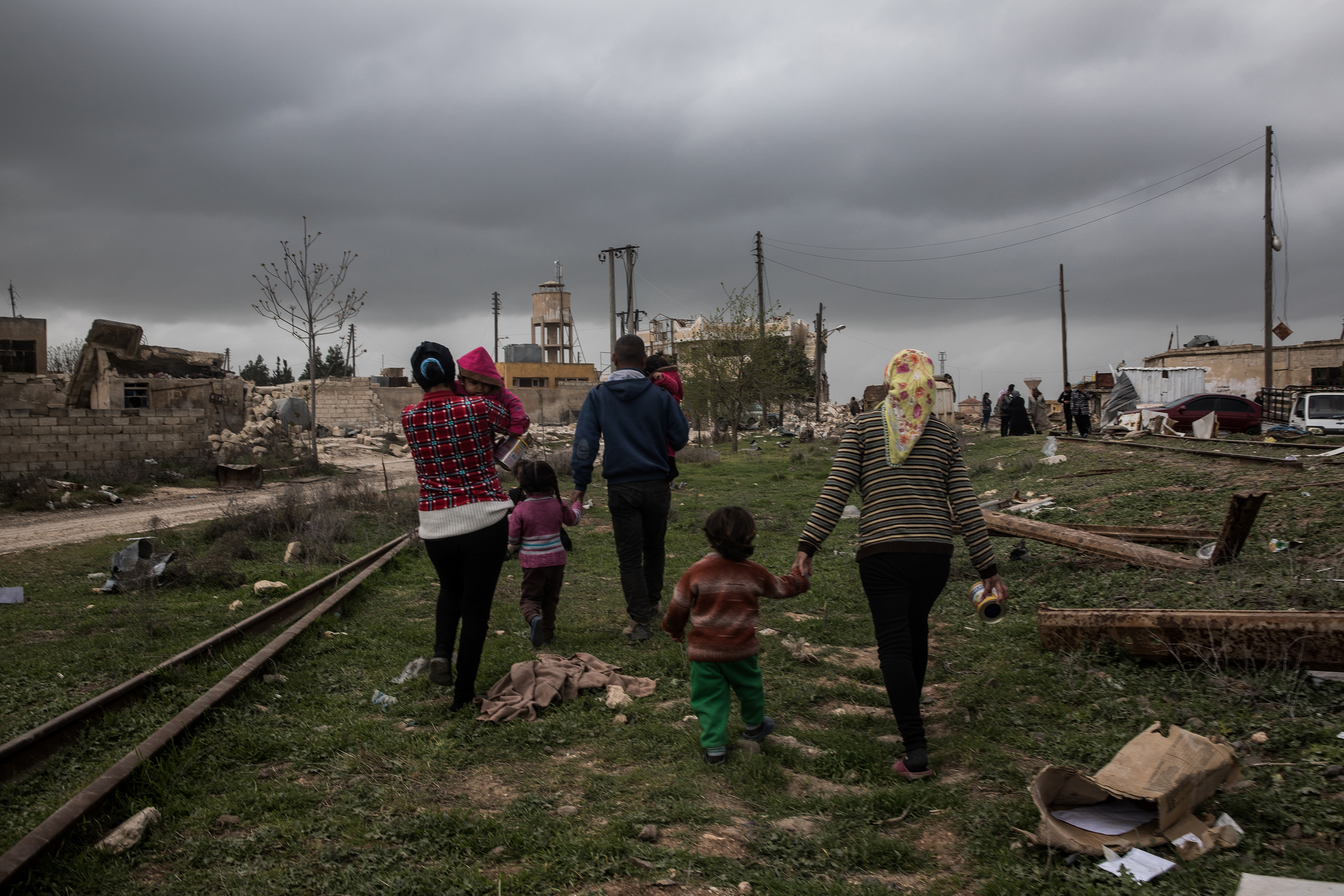 TEL RIFAAT, SYRIA – This family headed home after receiving milk from Kurdish Red Crescent aid workers. Mattresses, blankets and bread are being sent from the Syrian Kurdish areas of Rojava, Qamishli, and Kobane and distributed by Red Crescent volunteers, but they said it is impossible for them to meet the needs of so many people. In one ruined building where members of eight families live, some of the 50 children in the house cry and ask, again and again, for bread.