Bapir Hassan Saed owned 100 sheep before the so-called Islamic State took control of his village in northwestern Iraq in August last year, killing one of his sons and forcing him to take flight.

More than a year since he and 50,000 other Yazidis scaled Mount Sinjar with the militants on their heels, Saed is among 8,750 of the Kurdish religious minority left on the arid mountain range. He has just four sheep now, which provide his large family with milk, yoghurt and wool.

“It’s hard to keep the family going, but we’re forced to stay here,” the father of 10 told IRIN. 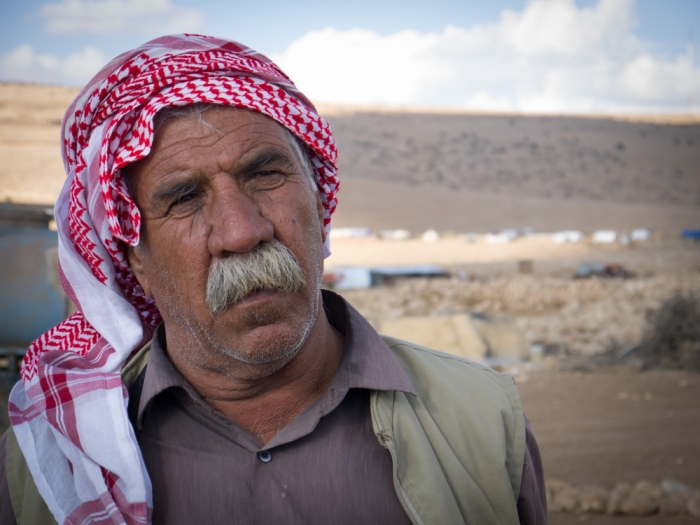 Since their dramatic escape from IS to the mountain, most Yazidis have moved on to refugee camps in the semiautonomous Kurdistan Region of northern Iraq, and others have sought safety in northern Syria.

Of those who remain, some chose to stay and join the fight against IS, while others were too frail to leave. All agreed that despite the publicity surrounding their persecution and exodus, they aren’t receiving nearly enough help.

Behind Saed, worn-out tents dot the plateau, most airdropped by Western countries when the displaced Yazidis first reached the mountaintop. They are tattered. Some families have built skeletons of wooden planks and draped tents or plastic covers over them, fashioning one or two additional shelters.

“The tents are not warm enough and we don’t have kerosene for the cold season,” lamented Saed, from beneath his thick white moustache. Winter is fast approaching, and by December the temperature will reach freezing point.

A stone’s throw from Saed’s tent, 26-year-old Nofa takes a break from her daily routine of washing, cooking and collecting wood to enjoy the meek autumn sun with some female relatives. 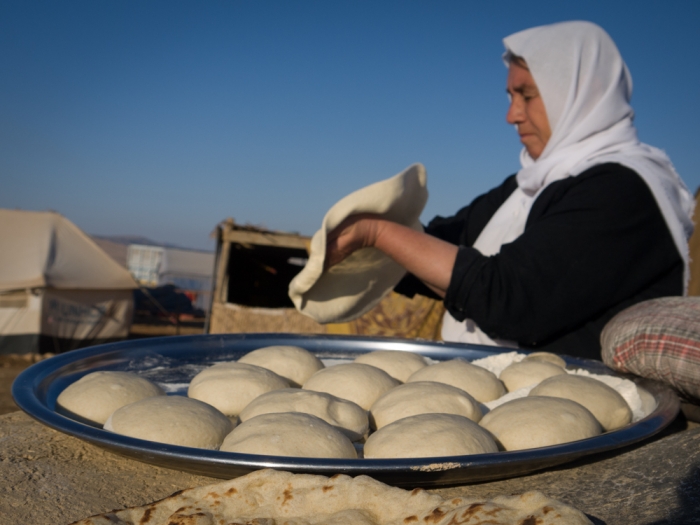 Several Yazidi children died of exposure on the mountain last winter, Nofa said, and the absence of proper medical facilities makes the cold especially dangerous. The Kurdistan Regional Government (KRG) told IRIN 280 people had perished on Sinjar since last August, but couldn't speak to the cause of the deaths.

No electricity poles line the plateau. Solar panels outside Nofa’s tent provide the family with enough electricity to power a few light bulbs and charge mobile phones. Panels, distributed by an aid organisation, can be seen next to most tents.

The remnants of former NGO activity can be seen in the form of recycled World Food Programme boxes and the solar panels, but the absence of aid workers on the mountain is stark, and only a few provide regular support.

The mountain is a microcosm of the divisions that plague intra-Kurdish relations. Almost all the militias and political parties in the region have some stake in the fate of the mountain and the city below – it’s on a major oil pipeline – and at least two Kurdish militias have a presence here.

For some NGOs, this makes maintaining impartiality tough, especially as some of the Yazidis themselves are fighters. For others, it means extensive negotiations and complex distribution mechanisms to make sure aid gets to the right people. Sometimes it just isn’t worth it.

Just a few kilometres from an active front line, some charities are simply unable to access the stranded Yazidis.

“From the difficulties of access and security concerns to the highly politicised nature of the operating environment, implementing humanitarian projects [on Mount Sinjar] can be challenging,” Tom Robinson, director of the local charity Rise Foundation, told IRIN.

Most Yazidis on the mountain are unemployed: they survive on savings, subsistence farming or the little aid that does make it up the mountain. Old-timers, who were here before last year’s influx, sell the tobacco they have always grown.

In March, a Japanese charity installed 12 communal water tanks and has since been trucking 24,000 litres of water to the mountain each day. The Kurdistan Workers’ Party (PKK) – a nationalist militia that arrived on the mountain at the same time as the Yazidis – has also built at least one well and supplies some people with fuel for their water trucks. The dominant Kurdistan Democratic Party (KDP) has begun building a well too. 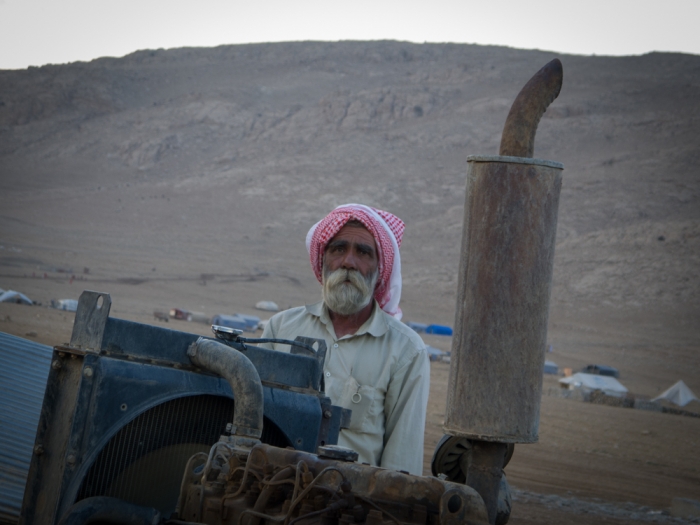 For $100 a month from the PKK, Sulaiman Aiso guards one of the wells and operates the generator that pumps the water. He says he is 45, but looks decades older.

“Some 50 people come to fill up each day, sometimes more because they own sheep,” Aiso told IRIN over the rumble of the generator. Everyone is welcome to use the well as long as they share the water with their neighbours, he explained.

Scattered throughout the area are also five flourmills, donated to the displaced community in May by Rise and another aid organisation. These are an enormous help as during the harvest season the machines can provide a tonne of flour every eight hours, enabling a self-sustainable production of bread.

But as the harvest comes to an end, many Yazidis have had to turn to buying flour rather than grinding wheat. While Baghdad’s Public Distribution System, a government food subsidy scheme, was once committed to supplying each citizen with nine kilos of flour, the Yazidis on Mount Sinjar are far beyond their reach.

Flour and vegetables, among other sundries, can be found in one of the several little breezeblock shops on the side of a long snaking road on the mountain. A 50g bag of flour costs $5.

The owner of one of the shops said business was going well, despite the widespread unemployment. He opened a few weeks ago after giving up on finding another job.

Inside the shop, the minute structure was dark and rudimentary and a group of young men sat in a cramped corner eating sunflower seeds. The shelves were stocked with eggs, cooking oil, cigarettes, nappies and beer.

“I work with a partner who brings the merchandise [from the cities] up to the mountain,” the owner said. “The prices [in the shop] are the same as those off the mountain.” 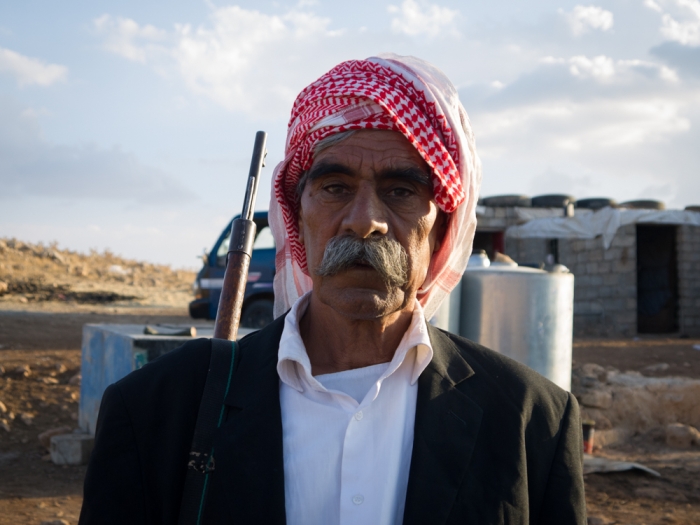 Tom Robinson/IRIN
Concerned about the threat of an IS attack, most men on the mountain own a gun

Down the road, two Yazidi civilians practise shooting their rifles while a gaggle of children roams around them, unruffled by the noise, vigorously blowing into whistles fashioned from empty bullet cartridges. There are two schools on the mountain, but most of the kids apparently aren’t attending.

The guns are theirs, the men explained, and they use them to protect their families. Although the displaced people of Sinjar Mountain have been able to recreate a relative sense of normalcy, the roaring anti-IS coalition jets and militia fighters among them are a constant reminder of their proximity to war. At the southern foot of the mountain, the battle for Sinjar City, still controlled by IS, rages on.

If and when Sinjar City and its surrounding villages are delivered from IS control, it is unlikely that the displaced Yazidi population – a total 400,000 by the KRG’s count – will be able to return home soon: demining and restoring infrastructure will take time. But most here are not thinking that far ahead. They’re focused simply on making it through the winter.

The sun begins to set around 5:30 pm, and the last plumes of grey smoke can be seen rising from clay ovens where dinner’s bread is baking. The terraced tobacco plantations and the adjacent cluster of tents and mud brick homes fall into darkness. Solar-powered light bulbs slowly light up the sprawling plateau. 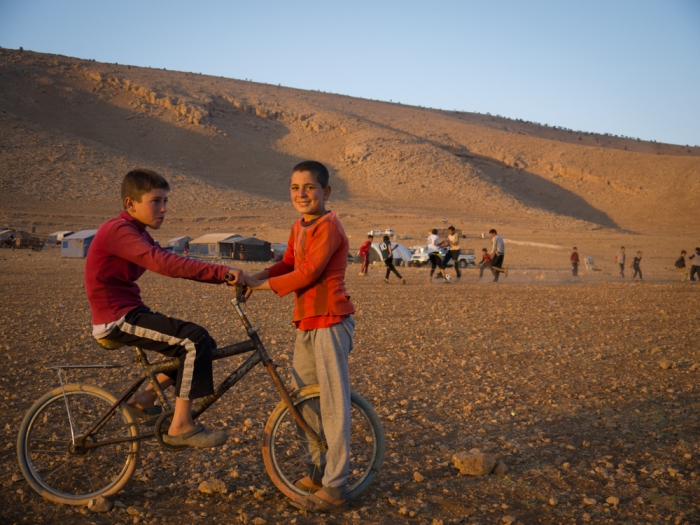 Tom Robinson/IRIN
A game of football on top of the mountain, as the battle for Sinjar City rages below
Share this article
Join the discussion