As a humanitarian at what point does one start to think the unthinkable? To question the impact of the aid provided, or perhaps even wonder if it’s doing more harm than good? Having served as an aid worker for over 20 years, deploying to countless emergencies, I’ve rarely had cause to question the primacy of humanitarian aid.

However, South Sudan turns logical thinking on its head. It blurs the distinction between right and wrong. It raises serious questions as to whether some of the $2 billion of humanitarian assistance delivered over the past 18 months is simply fuelling the war economy and prolonging the conflict.

Before outlining the challenge of working in an environment where aid is routinely co-opted or misused, it’s worth reiterating the appalling dimensions of the crisis in South Sudan.

An increasing number of people (roughly six million or half the population) are considered acutely food insecure. Of these, 1.7 million are thought to be on the brink of famine. One-third of the population has been displaced, either internally or across the region as refugees and 17,000 cases of cholera have been reported in the worst and most prolonged outbreak since independence in 2011.

The humanitarian crisis has been caused and compounded by a vicious conflict in which the protagonists flagrantly disregard humanitarian law, principles and space. The upshot is a conflict characterised by industrial levels of killing and the use of rape as a weapon of war.

The gratuitousness of the conflict translates into appalling levels of need. In global terms, the $1.6 billion sought through the 2017 Humanitarian Response Plan is third only to Syria and Yemen.

In 2017, more than $850 million has already been committed by the international community and delivered as food, medical, nutritional and water and sanitation support.

Without such levels of support the number of acutely malnourished children, or cases of cholera, may well have been far higher.

But, conversely, had parties to the conflict not deliberately interfered with the flow of aid, or targeted humanitarian workers and assets, the situation may have been significantly better.

Most dangerous place for aid workers

Here’s the rub. South Sudan is the most dangerous place in the world to be an aid worker. Fifteen humanitarians have been killed this year and 84 since the conflict erupted in 2013.

The UN’s emergency aid coordination body, OCHA, has catalogued 492 “access” related incidents so far this year. Half of all incidents have been accompanied by violence directed against either personnel or assets.

June was the most brutal month yet with threatening letters written to national aid workers, and 24 humanitarian compounds broken into and goods looted.

This disregard for humanitarian action follows a depressingly familiar pattern which culminated in the criminal attack by government forces on aid workers sheltering in the Terrain hotel, Juba during fighting in July 2016.

In this terrible incident female aid workers were raped, others were mock executed, most were beaten and, tragically, a South Sudanese journalist working for the Internews agency was killed. The Terrain incident was the devastating low point in a conflict where there is little safe ground for humanitarians.

The targeting of humanitarian workers and assets is compounded by a raft of ever changing and venal bureaucratic impediments whose express purpose is to exact tribute from the very agencies seeking to offer lifesaving assistance.

This is nothing new. The co-option and misappropriation of aid has a long history in South Sudan with supplies delivered through Operation Lifeline Sudan routinely diverted and/or redirected by the then rebel Sudan People’s Liberation Army (SPLA). 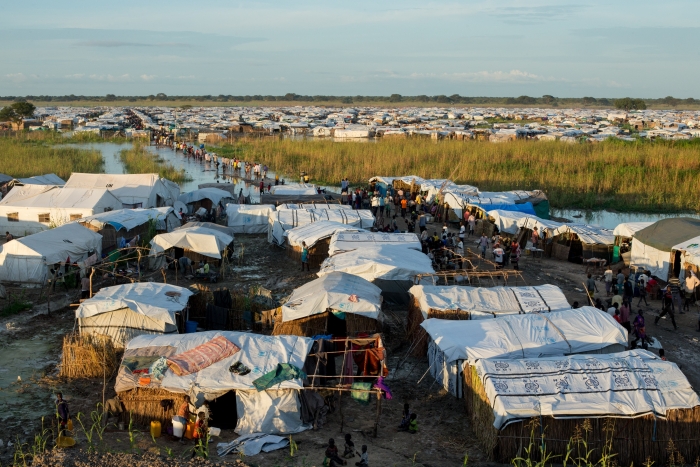 Aid as a resource

In the years either side of independence, the aid budget was largely overlooked in favour of more sizeable oil revenues that offered the means to lubricate and control influential patronage networks.

Petro-dollars propped up the state post-independence and afforded it the shard of economic legitimacy. But the fall in global oil market prices led to the tanking of the South Sudanese economy.

Attenuating oil revenues prompted rent-seekers to look elsewhere, and with few areas of the economy open for exploitation, the aid budget once again became an attractive option.

As part of this, government and opposition has sought ingenious ways to raise revenue by taxing humanitarian partners. A notorious recent example was the proposed introduction of a $10,000 work permit fee per individual aid worker which was only abandoned following strong diplomatic pressure.

No matter, the government changed tack and swiftly introduced a sevenfold increase in international NGO registration fees obliging partners to pay a $3,500 levy to maintain their lifesaving operations.

Further problems stemmed from the re-division of the state apparatus in December 2015, which increased the number of states from 10 to 28. While most commentators agree this was primarily an attempt to shore up the political centre (and with it patronage networks), it also provided the framework for poorly funded state administrations to raise revenue through opportunistic subnational taxation.

This continues with humanitarian agencies regularly requested to pay taxes on the movement of goods and personnel.

The movement and flow of humanitarian aid continues to be co-opted by parties to the conflict and appropriated in the interests of military objectives. The government’s National Security Service has repeatedly blocked the delivery of humanitarian supplies to Kajo Keji in Central Equatoria state thereby denying potentially lifesaving assistance to a population that it considers supports the opposition.

Similar examples of aid being diverted or denied have been recorded in opposition-controlled areas.

The humanitarian situation in South Sudan is the worst I’ve known in two decades, and unless assistance can be predictably and safely delivered, the return of famine cannot be discounted.

However, the insecurity of the operating environment, coupled with the direct targeting of humanitarian action, and predatory bureaucratic processes, compromises the pace, scale and effectiveness of the overall response.

This is of course entirely unacceptable. Humanitarian partners deserve the protection and support of those they are seeking to assist, and government and opposition forces have responsibilities under International Humanitarian Law to both protect civilians, and facilitate the delivery of lifesaving assistance.

We need to toughen our political posture and defend humanitarian principles and space, so that dedicated humanitarian partners are able to get on with the job without fear for their safety.