So far, 2017 has been all about fake news, US President Donald Trump, and his administration’s assault on the mainstream media. One of the most overlooked victims of post-truth politics is real news about humanitarian crises, where the facts should speak for themselves.

After two years of war, an estimated 18.8 million people in Yemen – that’s 69 percent of the population – need assistance; after six years of war, 13.5 million Syrians require aid and another five million live abroad as refugees; famine has been declared in parts of South Sudan, where five million people suffer from extreme hunger; starvation and cholera have already claimed hundreds of lives in Somalia, recalling famines in 1992 and 2011 that each claimed more than 200,000 lives.

This is just the tip of the iceberg for a humanitarian system that was derided as “broke” and/or “broken” well before the Trump administration proposed deep cuts to US foreign aid contributions.

Knowing where the truth lies

The truth is that humanitarian crises are lasting longer and needs are growing at unprecedented rates, as the effects of climate change, conflict and market failure combine, with deadly effect. The mechanics of global aid delivery urgently need a makeover.

Aid agencies must plan better and be given the access they need to act faster, free of obstruction. But they can’t be expected to do the impossible with inadequate funds, and they certainly can’t tackle the root causes alone.

António Guterres should be applauded for making early conflict prevention his opening gambit as UN secretary-general, but the kind of multilateralism his approach requires is in decline and under severe threat from growing populism and isolationism. Politics is a reflection of the public mood and perceptions about issues like conflict, climate change, migration, and aid delivery have a huge impact on public policy. In this era of fake news, what people need more than ever is fact-based information about these key global issues.

What makes things even harder is that even humanitarian facts are being twisted and made to suit particular agendas. And in a fragmented news marketplace in which left and right, or nativist and internationalist, are constantly vying for the upper hand and disseminating self-serving conclusions, how is the public meant to decide where the truth lies, what the priorities are? 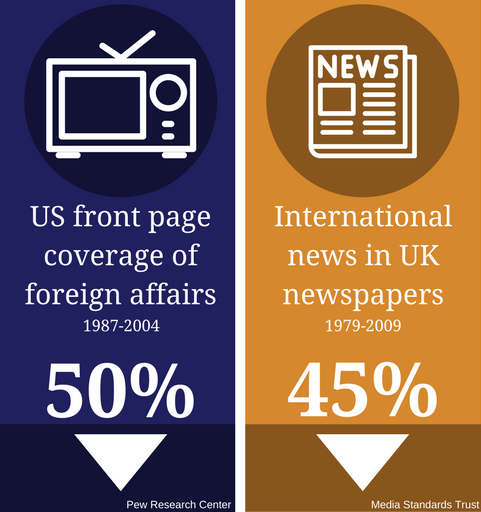 What is sorely lacking in times of heightened polarisation is nuance. Impassioned arguments between entrenched rival camps only encourage decision-makers to hide out in their own echo chambers, preaching to the choir. The realities on the ground are often far greyer, requiring solutions that are both more layered and less siloed. Collaboration and international partnerships are needed more than ever, but the mood is one of retreat and division.

Trump’s branding of the media as the “the enemy of the American people” and his petulant Twitter outbursts are really a distraction. There are greater concerns for journalism, and for journalists. In 2016, three in four in the profession who lost their lives did so in Syria, Yemen, Iraq, Afghanistan, Libya or Somalia – all gripped by conflict and deepening humanitarian disasters, from Mosul to Tripoli to Mogadishu.

That grim list includes one of our own contributors, Almigdad Mojalli, killed in the outskirts of the Yemeni capital, Sanaa, in what was believed to be a Saudi airstrike. Less deadly threats to newsgathering are obstruction and obfuscation. But it’s not just corrupt governments or Macedonian fake news portals manipulating the media. Spin is everywhere, even in the aid industry. It’s not surprising. This is big business: Emergency aid spending in 2016 was around $23 billion. Overall aid spending in 2015, including on development, was more than $130 billion.

But perhaps the biggest threats to serious journalism are business models that favour clicks, pageviews, and shares almost at any cost. The digital news marketplace has become a race to the bottom in which click bait is prioritised over real news. “If it bleeds, it leads” has become: “fake it to make it”.

That’s why it’s more important than ever, especially on issues of global importance like humanitarian crises, that media like ours have the support they need to survive. There are encouraging signs that the penny is starting to drop. Subscriptions for non-profit news organisations spiked following Trump’s election. Meanwhile, Facebook, accused of helping to propagate fake news and even of influencing the US election, is belatedly trumpeting the importance of proper journalism. Mark Zuckerberg has even hired fact checkers and is vowing to do more to give the industry the vital backing it needs. Facebook has teamed up with Mozilla, Craigslist founder Craig Newmark, the Ford Foundation, and others to launch the News Integrity Initiative, a $14-million fund aimed at promoting news literacy and increasing trust in journalism. And eBay founder Pierre Omidyar recently pledged $100 million to support investigative journalism and fight misinformation around the world.

But this positive journalism drive can’t just be a short-lived fad and must also focus on improving reporting from the ground so that the important facts are readily available to those who can make the biggest difference. Further support must be encouraged, because there’s a hell of a lot further to go. If you really want journalism that holds the powerful to account and plays a critical role in protecting the interests of the most vulnerable, there’s no way round it: you need to start financing it properly. Spread the word and help us turn this vision into a reality:

This piece was originally published by the World Economic Forum.