Asylum seekers at the US-Mexico border are caught in limbo, suffering from turmoil caused by the US government’s response to the coronavirus pandemic and now a spiralling outbreak in Mexico, with those staying in overcrowded shelters and makeshift camps particularly vulnerable.

Since the US government enacted the Migrant Protection Protocols in January 2019 – a policy also known as “Remain in Mexico” – asylum seekers have been forced to wait an average of two to three months in violent towns across the border until their US asylum hearing date.

Shelters in northern Mexico soon filled up, and people without accommodation had to resort to sleeping in tents in makeshift camps where they had little protection from gangs and drug cartels that prey on the stranded.

But the situation has become a lot more precarious since the arrival of coronavirus – Mexico has recently seen a COVID-19 surge, with Mexico City forced to halt plans to reopen as both the capital and the country suffer some of the world’s highest infection and death rates.

Back when the United States had a far larger outbreak than Mexico, the administration of US President Donald Trump put many immigration processes on hold, including the processing of asylum requests. It used the same public health concerns to justify returning anyone who crosses into the United States back to Mexico or their country of origin – a move widely criticised by public health experts and rights groups.

As a result, US asylum cases have effectively been delayed indefinitely, and asylum seekers are now facing a growing coronavirus outbreak in Mexico, where they are being made to wait. Shelters in northern Mexico offering people refuge have been on the front lines as US deportation and expulsion policies have sent people from the United States – which was the epicentre of the pandemic – to their doorsteps.

Many shelters have been forced to close their doors to new arrivals as a precaution. Others have implemented quarantine measures to try to keep the virus at bay. As of mid-June, more than 2,000 people in US immigration detention had tested positive for coronavirus, and more than 100 people in Central American countries and Mexico had tested positive for the virus after being deported from the United States.

“We are in a crisis right now and… it is more difficult for [migrants] to find a place in a shelter because there are a lot of shelters that are closed and aren’t accepting migrants.”

“Deported people are not tested for COVID-19 [before they are sent back], and shelters [in Mexico] have had to close because a deported case had contact with COVID-19, and this person spread the disease to others,” Antonio Caradonna, Mexico field coordinator for the medical charity Médecins Sans Frontières, told The New Humanitarian.

“We are in a crisis right now and… it is more difficult for [migrants] to find a place in a shelter because there are a lot of shelters that are closed and aren’t accepting migrants,” Caradonna continued. “There is a higher risk of being infected as well, because of the overcrowding at shelters.”

The Mexican government, led by President Andrés Manuel López Obrador, has been criticised for being slow to provide help to migrants during coronavirus, in line with an overall national response that has been marked by austerity and the spread of misinformation.

Migrants haven’t been granted access to healthcare or social services, and legal processes – such as the processing of asylum claims in Mexico – have ground to a halt. After being accused of failing to take basic steps for coronavirus prevention in detention centres, the Mexican National Institute of Immigration (INM) sent nearly 3,500 migrants from the centres back to their home countries, citing the move as a measure to control the spread of coronavirus.

Non-Spanish-speaking migrants and asylum seekers from places such as Sri Lanka and Haiti are in an especially difficult situation. “The information about coronavirus [provided by the Mexican government]... is only in Spanish, and not, for example, in French or other languages,” said Diego Lucero, coordinator of the Collective Exercise of Rights, a human rights NGO.

Given the lack of action at the national level, judges in different parts of the country have been putting pressure on the government to protect the health of the migrant population regardless of their immigration status. At the end of May, a judge in the northern Mexican state of Chihuahua ordered the government to allocate federal resources specifically to protect the health of people expelled from the United States.

Despite the pressure, the government is yet to take any tangible steps. “I don't believe that [the president] has supported migrants in any way, not even narratively, much less with concrete actions," said Viri Ríos, a Mexican political analyst.

Shelters along the US-Mexico border remain overcrowded and workers are facing difficulty helping migrants access healthcare. To help fill the gap, MSF is conducting coronavirus testing for migrants and asylum seekers, and providing psychological support. “Migrants are experiencing more stress, fear, and the feeling of being without options,” Caradonna explained. 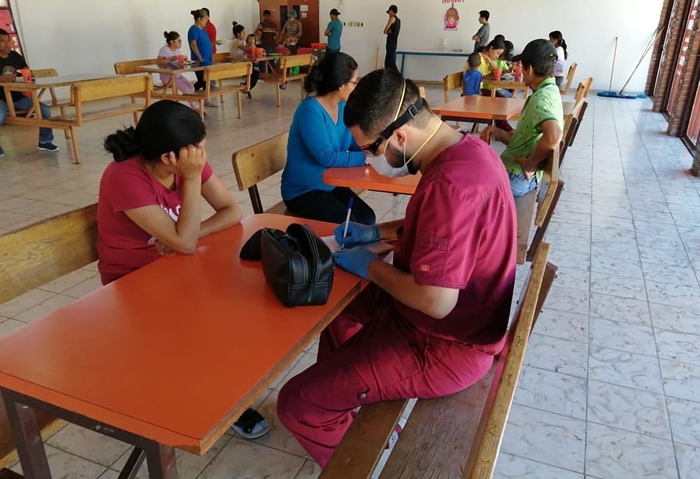 Javier Calvillo Salazar/TNH
Migrants, many of whom are Brazilian, wait in a common area at the Casa del Migrante Diócesis de Ciudad Juárez. The pandemic has further strained shelters at the US-Mexico border.

Blanca Alicia Rivera Esquivel works at a shelter in the border city of Ciudad Juárez. There are roughly 200 migrants staying there. Most are from Brazil and have been in the shelter for months. The shelter usually limits people to a three-day stay. Due to coronavirus, it is now allowing people to stay indefinitely, but has had to stop accepting new people.

It’s a similar situation in cities all along the border. Shelters are either full or, due to coronavirus recommendations, don’t allow new people to enter until they have passed two weeks in a quarantine centre – like the one in Juárez run by the UN’s migration agency, IOM, in a hotel in the city.

Rivera Esquivel worries about being able to feed and provide for the people in the shelter in the long-term during coronavirus. Similar to shelters elsewhere, supplies are being stretched thin. “We lack resources. The shelter is supported by donations, not by the government,” she said.

“We are taking all precautions necessary, and everyone [who works] at the shelter wears masks,” Rivera Esquivel added.

Those staying at the shelter in Juárez have been forced to remain inside for months. They are unable to leave the compound because of the virus, and any legal processes – like asylum or visa applications – are stalled. No one at the shelter has tested positive for the coronavirus, but many people are feeling the weight of the situation. “It makes us desperate,” Rivera Esquivel said. “We are totally unable to leave, and some [migrants] need medicines that we can’t get.”

“Migrants are experiencing more stress, fear, and the feeling of being without options.”

The situation is similar at shelters in the south of the country as well. The Jesús El Buen Pastor shelter in Tapachula, close to Mexico’s border with Guatemala, currently houses around 200 people. The shelter provides prostheses for migrants who have lost limbs while train hopping, the cheapest way to get from the south of Mexico to the US-Mexico border.

Until a coronavirus vaccine is discovered or borders open, many migrants will remain trapped at the shelter. “We are all afraid and very worried because we don’t want anyone at the shelter to become infected [with coronavirus],” the shelter’s director, Olga Sánchez Martínez, told TNH.

In the northeastern border city of Matamoros, around 2,000 people are still living in tents in makeshift camps. Arriving migrants and asylum seekers are put in quarantine for two weeks before they are allowed to enter, and US NGOs are providing medical care to residents. But waiting with no clear end in sight with the threat of the virus lingering all around is taking a toll.

Nora Martínez, 40, her husband, and their two young daughters have been living in a tent in Matamoros since December 2019. When they arrived in the city after fleeing gang violence in Honduras, the migrant shelters were already overcrowded – many operating at double capacity – because of the “Remain in Mexico” policy.

The Martínez family had their first court date related to their asylum application on 2 February. They crossed the border to Brownsville, Texas for the hearing, but returned to the camp in Matamoros feeling dejected and confused about whether their case would ever move forward. Coronavirus arrived shortly after, bringing greater anxiety and uncertainty with it.

As February stretched into March, the coronavirus pandemic gained steam and Martínez and her husband began to feel desperate. Worried that if their daughters stayed in the camp they would catch the virus, they decided to send their 12-year-old, Jaime Pamela, to walk across the international bridge to Brownsville. As a minor, they hoped she would be able to request asylum and be reunited with extended family living in Missouri.

But since the coronavirus broke out, the Trump administration has deported hundreds of unaccompanied migrant children – without, in some cases, notifying their families.

Jaime Pamela was returned from the US border crossing point and had to run away from Mexican immigration officials to avoid being placed in a shelter for unaccompanied minors in Mexico.

Martínez described the experience as “horrible”, and started to cry as she recalled her daily life, consisting of waiting for water and firewood, which doesn’t always arrive because movement in and out of the makeshift camp is restricted by immigration authorities.

She understood that movement had been limited to prevent the spread of coronavirus, but said the officials treated the migrants as if they were going to infect others, even though she knew of no COVID-19 cases at the camp.

For migrants and asylum seekers in shelters and informal camps across Mexico, anxiety about the coronavirus is compounded by nagging uncertainty about their stalled asylum processes. Between the two, Martínez said she and her family are “mentally and physically exhausted”.

“When are the courts going to open so we can continue our process?” she asked.

Until the United States decides to start hearing asylum cases again, Martínez and her family will be stuck in the tent that has become their home, waiting, with the lingering, invisible threat of the virus filling their days with fear. “We are going nowhere. Absolutely nowhere,” she said.