A long-running series of marches and other initiatives in Italy aims to give a voice to the families of thousands of migrants who have gone missing while crossing the Mediterranean Sea, known as the desaparecidos – the disappeared.

This week, the death toll for migrants attempting to cross the Mediterranean topped 1,000 for the sixth year in a row. Since 2014, some 19,000 people are documented to have died or are missing-presumed-drowned in the Mediterranean, according to data compiled by the Missing Migrants Project, run by the UN’s migration agency, IOM.

The real toll is thought to be much higher. The numbers exclude those who die or go missing in Libya or on their way to Libya through the desert.

Almost 12,000 bodies have never been recovered, while the “vast majority” of remains that have been found have never been identified – meaning families often can’t be certain if their loved ones are alive or dead.

Dozens of people marched on Thursday in Milan, Italy, demanding more information and better legal representation for the families of the missing migrants. A march also takes place every week in Rome, where campaigners paint their hands red to symbolise the blood spilt at sea. Similar events have also been held in the Italian cities of Turin, Palermo, and Como.

“Bodies on beaches are seen as a European problem, and the families are somehow removed from the equation,” said Simon Robins, a senior research fellow at the University of York, who oversaw the Mediterranean Missing research project.

Robins explained that the families’ struggle is hardly ever visible in Europe. “These people are highly dispersed,” he said. “They’re in dozens of countries, they’re isolated, they’re often not able to raise their voices collectively.” 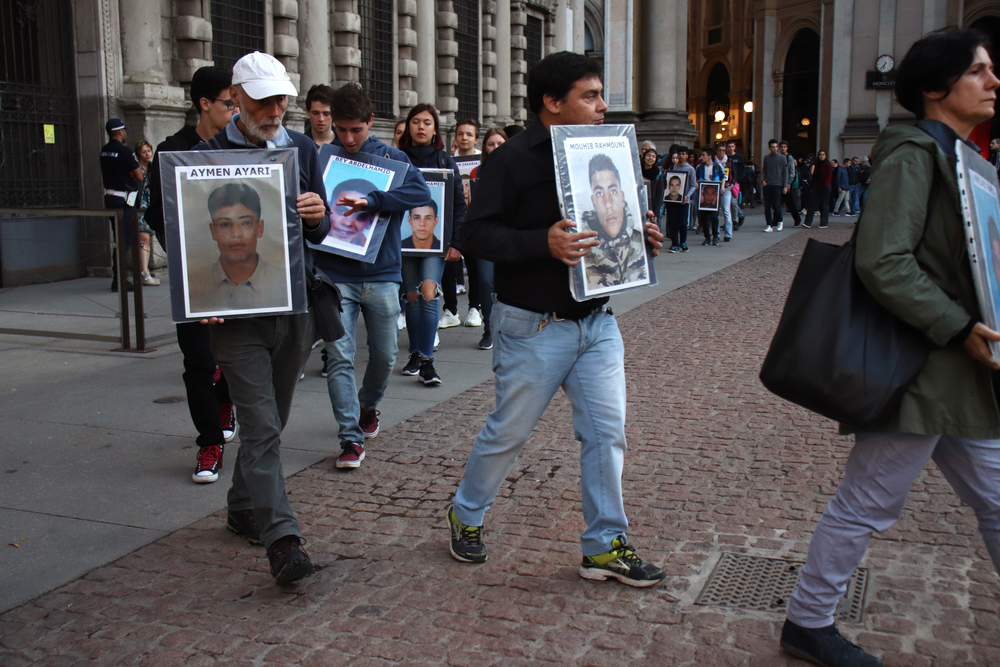 Alessio Perrone/TNH
Marchers hold up signs with the names and faces of the "desaparecidos", migrants who have gone missing while crossing the Mediterranean.

Starting at 6pm in Milan, campaigners, students, and sympathisers lay down a blue sheet, symbolising the sea, in a central square before walking silently in circles around it, holding up photographs of missing migrants.

The organisers, who belong to the campaign group Milano senza Frontiere (Milan without borders) call it the “March for the new desaparecidos”.

“They are some of the Tunisian and Algerian young men who went missing in the Mediterranean – they were given to us by the associations of their families,” said Edda Pando, a Peruvian activist in Italy and one of the organisers of the march.

“We march to give their families a voice, and to give an identity, a name and surname, to the statistics about deaths at sea.”

Behind the photos carried in the Milan march lie personal tragedies for the families.

Mohamed El Raouafi, for example, left Tunisia on 14 March 2011, aged 18. He phoned to announce he had arrived in Italy the same night and his family says TV footage confirms his arrival. After that, silence fell. His family still has no idea what happened to him.

Another photo shows Mohamed Habboubi, 22, from 2012, the year he disappeared. A third bears the name of Nabil Aissou, an Algerian who would have turned 40 on the day of the march – but who has been missing for over 10 years, since 8 October, 2008.

As bodies are seldom identified, families often can’t confirm what happened to loved ones or where they are buried – if at all. Some don’t even know if their family members are alive or dead, and are therefore unable to get a death certificate, which could help them move on with their lives.

The lack of definitive answers can leave families traumatised and desperately wanting closure, but they are hardly ever counted among the victims.

Italy had been the most popular destination country for migrants leaving from North Africa, with arrivals of over 180,000 in 2016, and the dead or missing numbered at more than 4,500.

While the number of migrants attempting the route has dropped dramatically – Italy and Libya signed a deal in 2017 under which Libya intercepts migrants trying to cross, in exchange for Coast Guard training, vessels, and funds – the death rate at sea has risen, tripling in 2018.

Campaigners are showing no sign of slowing down. They now organise the march for the new desaparecidos every first Thursday of the month in Milan’s Piazza della Scala, in front of the city council. Occasionally, they raise funds to fly some families to Italy to take part.

Pando explained that the march started in the summer of 2015 after some families in Algeria and Tunisia – where political upheavals made it easier to associate and campaign on the issue – gave the activists the photographs of the missing.

The format copies the march of the Mothers of Plaza de Mayo in Argentina, who have marched on Thursdays since 1977 holding photos of those who were forcibly disappeared under the military dictatorship.

Although they’re hasn’t been much media interest around the march in four years, Pando told The New Humanitarian that the march would continue to be held every Thursday.

"People keep dying and disappearing in the Mediterranean," she said. "And if that continues, so must we."