Border guards in southern Spain are bracing for another spike in migrant arrivals from North Africa, but government officials and the UN say talk of a “crisis” in the run-up to Sunday’s general election – encouraged by far-right parties – is premature and overblown.

Last summer, Fabrice Leggeri, director of EU border agency Frontex, described an increase in arrivals to Spain as his “greatest worry”. Reception centres along the southern coast were over-capacity and local politicians were urgently calling for more resources. Around the same time, politicians in Spain began loudly campaigning on anti-immigrant platforms, and phrases like “migratory crisis” and “pull factor” became buzzwords in the Spanish press.

This kind of rhetoric is new for mainstream Spanish political discourse, but not for Europe: in 2015, Leggeri made similar warnings, citing still-unproven figures about “between 500,000 and one million migrants ready to leave from Libya”.

And arrival numbers in the early months of 2019 have dramatically dropped from last year, according to Interior Ministry statistics. “Rescue services and other migration-related services are not overwhelmed,” a ministry spokesperson said.

Frontex, however, is increasing its support to Spanish rescue crews in light of another possible increase in sea arrivals this summer, its spokesperson told TNH.

“Rescue services and other migration-related services are not overwhelmed.”

At its closest, the distance between Morocco and Spain is only 14 kilometres. Arrivals over the Strait of Gibraltar or the Sea of Alborán drastically increased in 2018, and immigration looms as a key issue as Spaniards prepare to vote in the 28 April general election.

Immigration’s sudden prominence in Spanish politics echoes recent elections elsewhere in Europe – including Italy – that have seen the rise of far-right parties and movements.

At the start of last summer, Italy was in the spotlight as the main route into Europe. But from July to September 2018, nearly four times the number of people arrived on Spanish shores than during the same period in 2017, according to data from the Spanish Interior Ministry.

As the winter came, and with it rough seas and the expectation of fewer departures, the number of crossings was still unseasonably high. In 2018, just under 60,000 people crossed the western Mediterranean to reach Spain, or drowned trying – compared to fewer than 22,000 in 2017 and 8,000 in 2016.

The latest numbers, while high by Spanish standards, are still far lower than the hundreds of thousands of arrivals that countries like Greece and Italy have experienced in recent years.

In advance of the general elections on Sunday, here’s a look at what may be behind political talk of a “crisis” and an overview of Spanish migration trends.

When did the arrivals to Spain start?

Spain has long been both a transit and destination country for people seeking to reach Europe.

Over a decade ago, tens of thousands of people arrived each month by sea in the Canary Islands before a joint programme among Spanish police, Frontex, and police in Morocco, Mauritania, and Senegal stopped the flow. 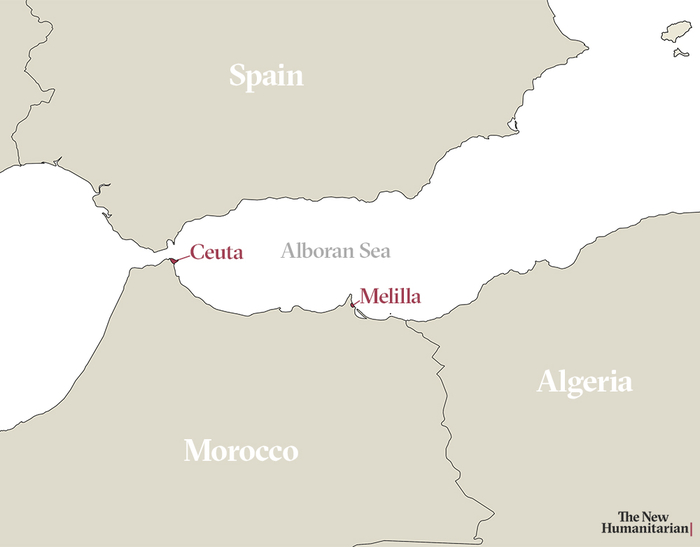 The programme was called Operation Hera, and involved the EU funding, training, and equipping non-EU coast guards to pull migrants back before they could reach Spanish waters. At the time, the operation was criticised as an effort to outsource European border management to non-European countries.

Years later, people began entering Spain via Europe’s only two land borders with Africa: between Morocco and the Spanish enclave cities of Ceuta and Melilla. That flow has fluctuated ever since: for years, the number of irregular arrivals to the two cities has been in the hundreds or the thousands each month.

In 2014, as the arrivals spiked, Spain and Morocco reached a deal that would send more development money to the North African country, much of which was invested in border management.

That same year, Morocco reinforced its land borders with Spain, surrounding the city of Melilla with a new fence, three metres tall, covered in razor wire, flanked by a two-metre-deep moat, and dotted with armed guard posts. The new fence and moat were in addition to the three other fences that Spain had built in Melilla years earlier. Still, the flow of people over the five obstacles did not stop.

Two years ago, the number of arrivals began rising: in the second half of 2017, three times as many people arrived on Spanish shores as years before. In that same period the following year, that number nearly tripled again, with just under 50,000 people arriving.

Last summer, Spain revived a 26-year-old agreement with Morocco that allowed them to return people to the other side. Still, according to statistics from the Spanish Interior Ministry, hundreds of people continue to arrive in Ceuta and Melilla every month.

How is the issue being politicised in Spain?

In the last year, some Spanish political parties have begun campaigning heavily on anti-immigrant platforms.

In November, Vox became the first far-right party to win seats in a Spanish regional election since the death of fascist dictator Francisco Franco.

Even Spain’s governing centre-left party, PSOE – traditionally less hostile on immigration – was found in January to have proposed a plan that would attempt to reduce migration to Spain by 50 percent, by slowing down arrivals on the southern coast.

This plan referred to similar “pull factor” arguments mentioned in 2013 by lawmakers in Rome and Brussels that eventually led to the end of Italy’s Mare Nostrum rescue operation. While Spain’s interior ministry quickly rowed back from the January proposals, the Salvamento Maritimo sources told TNH they were concerned that plans to curtail their rescue operation could still go through. Rescue workers pointed not to a migration crisis, but to a politicisation of the issue that risks a humanitarian crisis if their operations are not allowed to continue.

Talk of “invasion” and “substitution” became taglines for Vox in the lead-up to the regional elections. After winning seats in the regional parliament, Vox’s leader began calling for the mass deportation of people without legal status and has recently referred to Spain’s sea rescue vessels as “buses” and “taxis”. “Water taxi” has long been a derogatory term in Italy and elsewhere in Europe, used to describe NGO and national rescue efforts in the Mediterranean.

Since the regional elections, the leader of another of Spain’s right-wing parties, the People’s Party, has joined the bandwagon, speaking ominously of “millions of Africans” waiting to come to Europe.

Are there more arrivals because Italy has closed its ports?

Between 2013 and 2017, hundreds of thousands of migrants and refugees arrived in Italy from Libya, travelling the Central Mediterranean route.

But last year, Italy’s far-right Deputy Prime Minister Matteo Salvini shut Italian ports to NGO rescue vessels and even, for a time, to Italy’s own coast guard. For years, as a member of the European Parliament, Salvini had spoken often about “invasions” and “ethnic substitution”.

At the time, many people worried that the migratory flow from North Africa would be redirected towards Spain and the Western Mediterranean route.

The most recent rise in arrivals to Spain does roughly coincide with Salvini’s decision, but NGOs, the UN, and border agencies working the route offer mixed views about the extent of that correlation.

“Last summer, there was a major surge in people coming. Many people arriving in a very short period of time,” said José Villahoz, from Algeciras Acoje, an NGO operating on the south coast of Spain. “If two years ago 80 percent were entering in Italy, now, that 80 percent is entering in Spain. We’ll see what happens in another two years.”

But Ryan Schroeder, a spokesperson for the International Organization for Migration, disagreed. “We don’t share that assessment,” he said. “For one, the increase on the Western Mediterranean started well before the slowdown on the Central [Mediterranean] route.”

If the route to Europe had shifted from Libya to Morocco in a short time, Schroeder argued, that change would be noticeable in the nationalities of people arriving in Italy versus Spain. Here, he said, there is little correlation. “We don’t think there’s any indication of a major route shift happening yet,” said Schroeder. “It doesn’t work that quickly – it takes a long time for smugglers to change routes.”

But a spokesperson for Frontex said that while the Central and Western Mediterranean routes are independent migratory routes, the agency has registered a “gradual displacement effect” from the Central Mediterranean to the Western route.

“That displacement is typically measured by the arrival of nationalities which previously were using one route, now being detected on another,” the spokesperson said by email. In the case of Spain, she added, there were more people arriving to Spain with nationalities that, in the past, had been more common along the route from Libya to Italy.

In Andalucía, the southern province of Spain, it is still unclear the extent to which Salvini’s migration policies in Italy have driven a surge in arrivals from North Africa. But NGOs and rescue workers worry that Spanish politicians are beginning to follow the hardened Italian line.

(TOP PHOTO: An asylum seeker on the coast of Spain.)