Diphtheria continues to rapidly spread in Bangladesh’s swelling Rohingya refugee camps, with aid groups predicting the number of suspected cases – reported at more than 700 as of this week – could multiply every few days, testing already strained resources in the densely packed settlements.

The World Health Organization says there have been at least 722 “probable diphtheria cases” and nine deaths over the last month. Conditions in the crowded refugee camps are ripe for the spread of disease, and aid groups fear the reported cases may well be the “tip of the iceberg”.

“The extremely congested conditions in the camps, low immunisation coverage of the refugees, the lack of clean water and proper sanitation facilities are conducive to a rapid spread of the epidemic, with the number of cases expected to double every three to five days,” the European Union’s humanitarian aid arm, ECHO, reported this week.

UNICEF says diphtheria is now “the top health priority” in the camps, which have seen more than 646,000 Rohingya refugees surge into Bangladesh since late August, fleeing a military crackdown that has purged entire villages from Myanmar’s Rakhine State.

The latest outbreak has put a spotlight on a highly contagious but preventable disease. Diphtheria is a respiratory illness that can trigger blockages to a person’s airways. It is a potentially deadly disease, with a fatality rate between five and 10 percent — but death rates can be as high as 20 percent for children younger than five years old.

In Bangladesh, diphtheria had all but been eliminated, thanks to robust immunisation coverage. There were only two reported cases of diphtheria in 2016, part of a steady drop over the preceding two decades, according to figures from Bangladesh’s government and the WHO.

Local organisations warn that the strained health system in Cox’s Bazar, where most of the new Rohingya refugees fled, is ill prepared for the outbreak of a highly infectious disease. This could have far-reaching impacts on local residents, who have hosted the Rohingya but generally see little of the aid resources that reach the refugees.

“Physicians and health workers on the ground are unfamiliar with the nature of this disease,” BRAC, a Dhaka-based aid group, said in a report this week, calling for training and resources to help local health workers combat the outbreak.

But treating the disease has been difficult even in the camps, which stretch over vast distances through rough terrain and limited or often non-existent roads. In early November, health workers treated a 30-year-old woman suspected of having diphtheria — she had a “thick grey-white slough over the back of the pharynx”. But two days later, the woman left the clinic where she was receiving treatment, and WHO officials were unable to track her down.

Health officials say early treatment of diphtheria is critical for survival, but the antitoxins used to treat the disease were unavailable in Cox’s Bazar.

Compounding the problem are the squalid conditions and extreme density in the Rohingya refugee camps, which have mushroomed in size but lack basic infrastructure. 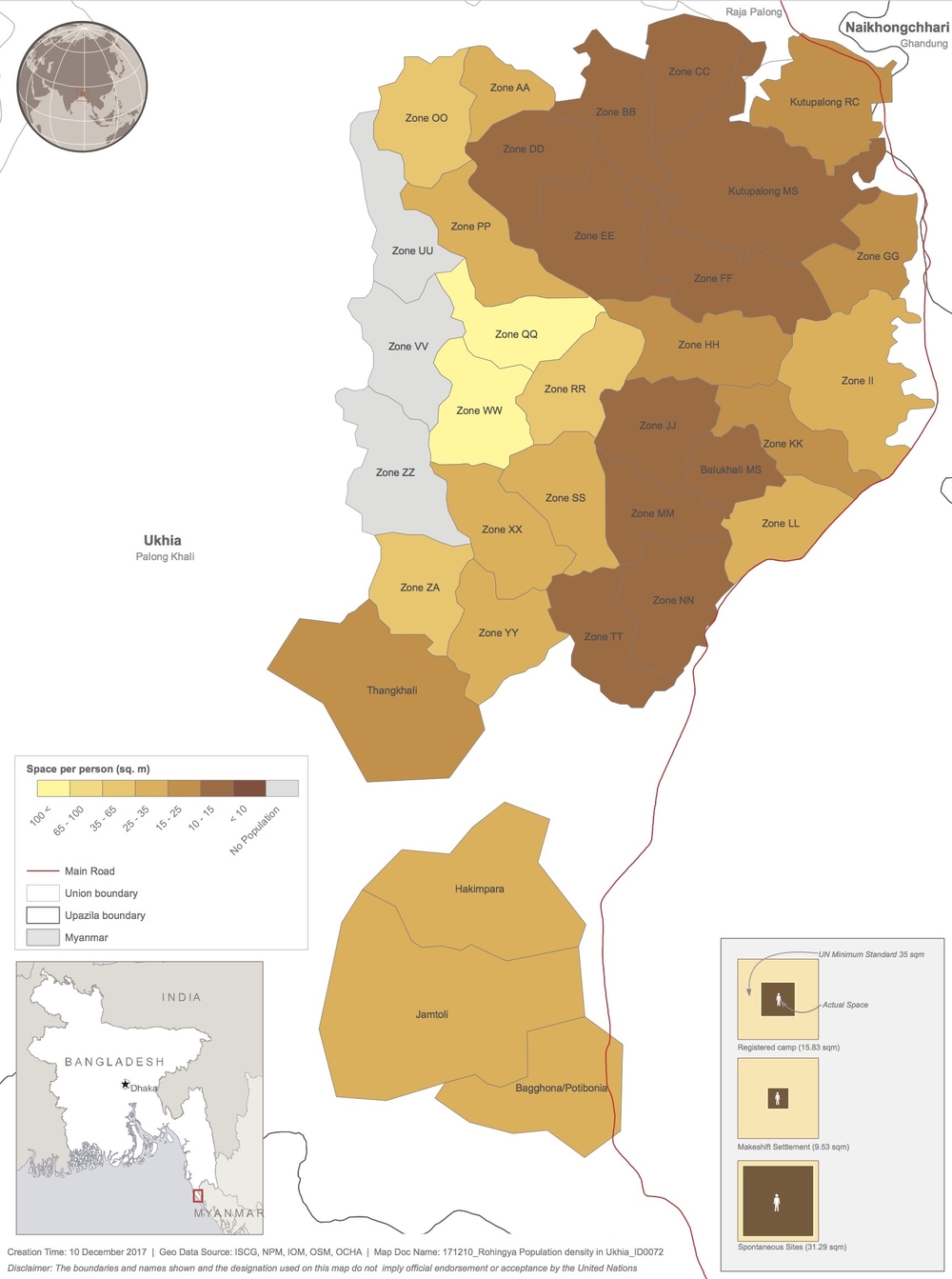 ISCG
A map by the group coordinating aid to Rohingya refugees shows the extreme density levels in a giant settlement between Kutupalong and Balukhali in Cox’s Bazar, Bangladesh. Dark brown shading indicates space of less than 10 square metres per person.

A progress report on aid efforts during the crisis notes that even 20 square metres per person would still not allow room for crucial infrastructure like water and waste treatment facilities. “Even this is far from being attainable,” stated the report, which noted that at least 120,000 people would have to be moved to meet even this still-inadequate threshold.

At the same time, the new water and health infrastructure in the camps is already inadequate. More than one third of the 33,000 latrines installed in the camps are already unusable, according to a recent assessment. And more than 90 percent of household water sources in the camps are contaminated with E. coli bacteria, according to testing by government health officials and the WHO.

While the current diphtheria outbreak was beginning to develop in mid-November, health workers had already identified a major problem: the severe shortage of adequate healthcare services in the camps. Of the 105 healthcare posts dotted throughout the camps, only 18 were deemed to meet any of the minimum criteria to be considered a “primary health centre”, according to the minutes of a 15 November health sector meeting.

“It is clear that the distribution of services is irrational. Large populations are underserved,” the minutes stated. “In the event of disease outbreaks, we cannot serve [the] needs of the population. This needs to change.”