Check out the humanitarian topics on IRIN’s radar and trawl through our curation of the best reports, opinion, and journalism you may have missed:

Look no further than recent headlines for a glimpse at the horror of urban warfare: the UN said 300 civilians have been killed in US-coalition led airstrikes on Raqqa since March; Human Rights Watch reported civilian casualties are mounting in Mosul; and so-called Islamic State itself is reported to have killed hundreds of Mosul residents inside the city. So this report and accompanying site on urban conflict from the International Committee of the Red Cross – “I saw my city die” – is timely. It focuses on conflicts in Iraq, Syria, and Yemen, countries that account for half of the 90,000 civilian deaths the group counts between 2010 and 2015. There are upsetting statistics, but also photographs and harrowing testimonies about what it’s like when the war comes into your kitchen. We're no closer to stopping the fighting (anywhere, really) and as more people move to urban environments – by one estimate 70 percent of the world’s population will live in cities by 2050 – this problem, which mostly impacts civilians, is not going away. IRIN is on the case, so look out for more from us on rising civilian casualties soon.

Polio: down but not out

Thought polio was done and dusted? Not quite. The World Health Organization says it’s down 99 percent from 1988 – there were only 37 reported cases last year – that’s largely down to courageous health workers who have defied militant attacks to vaccinate populations in places, like Pakistan, where the virus is endemic. But there have been some recent worrying setbacks in the fight against the disease. This week, the WHO confirmed two separate outbreaks in the Democratic Republic of Congo – four people in total have contracted a form of polio that is vaccine-derived – this can happen in areas where immunisation rates are low. Two cases of vaccine-derived polio have also been confirmed in Syria’s Deir Ezzor Province, parts of which are controlled by so-called Islamic State, others by forces loyal to President Bashar al-Assad. It’s all a warzone and humanitarian access is extremely difficult. Jan Egeland, chair of the UN’s task force on humanitarian access, warned (and tweeted) on Thursday that polio could easily spread to more war-torn communities in Syria. Although only a couple of instances of polio have been confirmed by lab test in Deir Ezzor, 58 cases of accuse flaccid paralysis, a possible symptom of the disease, have been reported. Egeland said trucks are being readied to bring polio vaccines into IS-held areas. If and how they get there will be worth watching.

The time between harvests when food is scarce is known as the “lean season”. As that period gets underway in South Sudan, the term does little justice to the extent of the country’s food crisis. According to UN data, some 5.5 million people across the country faced “severe food insecurity” in May. Of these, 1.46 million were on the brink of famine, which means they live in an area where – even if humanitarian aid is delivered – one in five households have “an extreme lack of food and other basic needs where starvation death and destitution are evident”. Famine has already been declared in parts of Unity State. Persistent armed conflict is the chief driver of the food crisis: In May alone, fighting – including around the Central Equatoria town of Yei and in Upper Nile State – prompted some 60,000 people to flee the country. In all, some 1.9 million South Sudanese are living as refugees in neighbouring countries, while another two million are internally displaced. Aid workers are not immune to the violence: of 89 incidents affecting humanitarian access in May, a third involved violence towards humanitarian personnel or assets. In Unity State, all the community health workers at a facility in Nimni were, reportedly, forcibly recruited into the armed forces. IRIN is shortly to publish a major multimedia package on the humanitarian situation in the Equatoria region.

The global battle against desertification

“Desertification” is something of a misnomer: it doesn’t mean the expansion of deserts, but rather the man-driven degradation of drylands. Farming, mining, overgrazing, tree-cutting, and climate change can all play a part in removing the plant cover that binds soil together, or depletes nutrients in soil. Such damage is often aggravated by wind and water erosion that carries away topsoil, leaving an unfertile combination of dust and sand – in other words, desert. Desertification affects all regions in the world and could lead to the displacement of 50 million people in the next 10 years, as arable land is being degraded some 30 times faster than historical rates. And there’s a vicious circle at play: population growth in developing countries leads more dryland areas to be exploited for farming, which in turn leads to overgrazing and depletion of groundwater. Climate change, meanwhile, is increasing the severity and frequency of droughts, compounding the problem. Countries are working together to tackle desertification under a 1994 convention, and Saturday is the World Day to Combat Desertification and Drought. To mark the occasion, events are being held all over the world, including tree planting in Cameroon, a desert film festival in Iran, and a seminar in Sicily. There’s a full list of events here.

If the humanitarian sector were the movies, it would be the Cannes festival – a deluge of reports, meetings, initiatives, and events crowd the week ahead in Geneva, while deals will be done on the sidelines. The annual UN ECOSOC Humanitarian Segment may be a little low on glamour, and frankly, entertainment, but it’s still the highlight of the humanitarian diplomacy calendar. This year, the community will peer behind the curtain to see if the aid reform Grand Bargain package is living up to its potential, and assess which of the fine commitments of the World Humanitarian Summit have flourished and which have languished. Not only will IRIN be covering the events (follow @benparker140 for updates), but to kick things off, we’re also hosting an informal discussion with Berlin-based think tank GPPi over coffee and croissants at our office in Geneva. Pop by if you can! RSVP to [email protected] (seats limited). 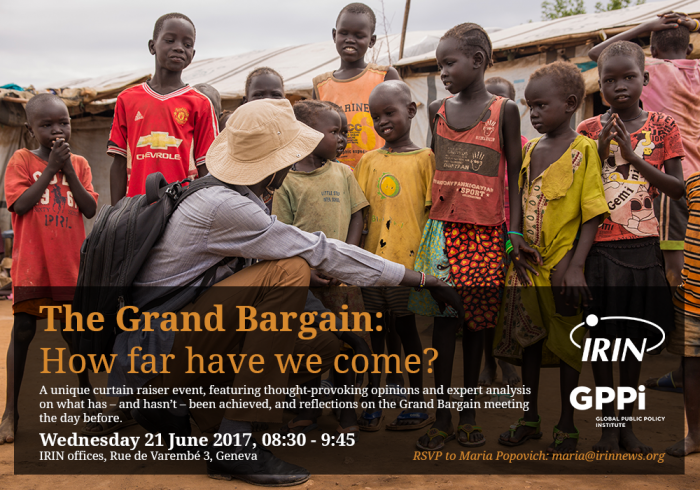 If we told you a conflict you’d never heard of claimed 50 percent more lives in Nigeria in 2016 than the Nigerian government’s war with Boko Haram, you’d tell us to take a hike. But those are the facts, at least according to SBM Intelligence. This seldom reported and even less understood conflict is between Fulani herdsmen and farming communities in the Middle Belt region. Attacks are so prolific that more than 1,000 fatalities were recorded in one state (Benue) alone. The received wisdom is that it’s about cattle rustling, but as IRIN Editor-at-large Obi Anyadike discovered on assignment there, it’s a lot more complicated than that. “There are places in the world where divisions are so entrenched, positions so implacable, ‘truth’ becomes meaningless – grievance distorts everything,” he writes. What does come through clearly in Anyadike’s vivid reporting is the awful human costs on vulnerable civilian populations locked in a terrifying cycle of revenge and loss.