"I was very scared in the sea. The boat was overcrowded. I could barely move. I was afraid of dying, but even more afraid of being caught by the Libyan police.”

Ali*, a 21-year-old from Ghana, spoke to IRIN shortly after disembarking from a search-and-rescue vessel in Catania, Sicily.

"The traffickers tell you when you get in the boat that in three hours you’ll be arriving in Italy,” he said, adding that by the following morning, when they were rescued, their boat had only moved 12 nautical miles from the Libyan coast.

Ali survived, but three of his friends who attempted the journey before him did not. They are among 2,726 migrants who have lost their lives in the stretch of the Mediterranean between North Africa and Italy so far this year, according to the International Organization for Migration.

Over the last two years, search-and-rescue efforts in the Central Mediterranean have been ramped up significantly and have undoubtedly saved countless lives. On Sunday alone, the Italian coastguard rescued 1,100 migrants from a total of 11 different vessels. And yet, the first half of 2016 saw a 67 percent increase in the number of migrants who died or disappeared trying to cross the Mediterranean compared to the same period last year, according to figures released in a report by IOM last week.

The vast majority of deaths occur in the Central Mediterranean, where one in 29 migrants lost their lives attempting the crossing between January and June. This is compared to one in 410 who used the much shorter Eastern Mediterranean route between Turkey and Greece.

But the longer length of the Central Mediterranean route is not the only reason it has become so risky. Experts say smugglers are using increasingly dangerous strategies to maximise their profits.

Libya remains the main gateway to the Central Mediterranean, and officials there claim the country’s severe cash crisis is driving a surge of new entrants into the migrant smuggling trade.

“Every day, we see more young people are getting involved in smuggling,” a senior official from Libya’s Department for Combatting Illegal Immigration told IRIN on condition of anonymity. “There is no work, no cash in the banks, and all the young people know that they can get easy cash from this type of work.”

The official said ordinary people with an empty garage, farm, or house near the coast are starting to use these as holding places for migrants, while waiting for favourable sea conditions.

“There are smugglers currently operating all along the western coast from Tripoli to Zuwara, and, as soon as the sea is good, they are ready to quickly transfer the migrants from these holding places to the sea,” he explained.

The migrant trade on Libya’s Mediterranean shoreline has always operated on the basis of supply and demand, but, with black market exchange rates for foreign currency soaring to more than double the official exchange rate, smugglers have also now dropped their prices, making the journey more affordable.

“There are so many migrants waiting to go that often smugglers are now putting five or even 10 boats out to sea at a time from one departure point, where before it was maybe one or two.”

This practice of launching multiple boats at once is complicating search-and-rescue efforts and has contributed to this year’s higher death toll, according to the IOM report.

Last Sunday (21 August), a vessel operated by Médecins Sans Frontières was in the process of rescuing migrants from a wooden boat that was taking on water when it received word that another boat carrying migrants, this time a small inflatable one, also needed saving.

“We took in a total of 551 people in one combined operation, instead of two operations. It was more difficult and made the situation more urgent," said Jacob Goldberg, a medical coordinator with MSF.

Not only are more boats being launched simultaneously, but they are also being packed with more migrants.

“They’ve gone up from 100 [people] on the rubber boats to 150 or 160. On the wooden boats, from around 450 to 550 [before], we’re now seeing 550 to 800,” said Peter Sweetnam, director of the Migrant Offshore Aid Station, a Malta-based NGO that operates two search-and-rescue vessels in the Mediterranean. 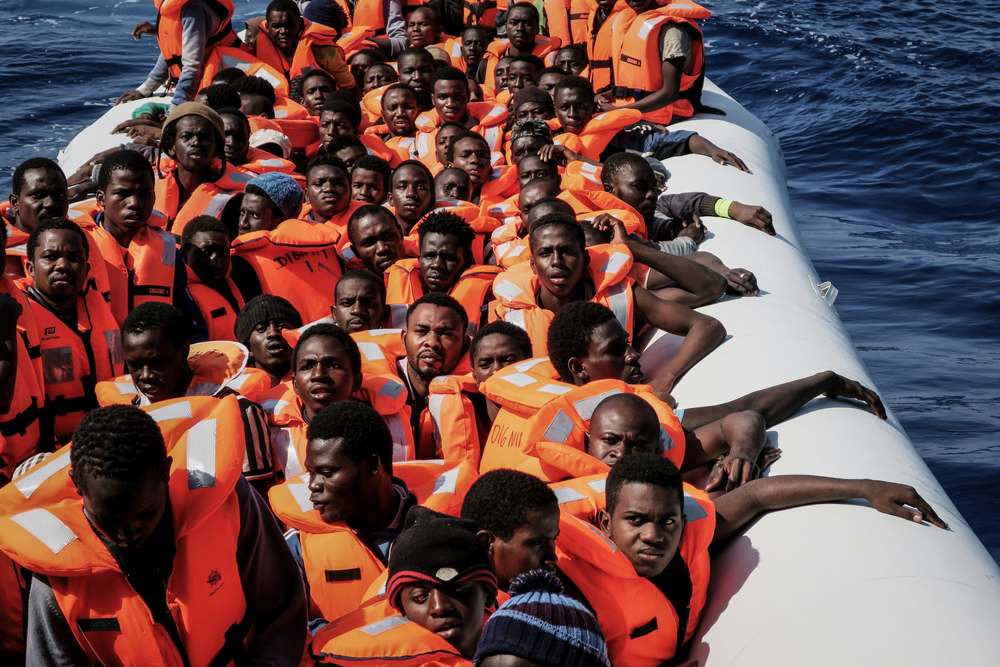 “People aren’t normally wearing life jackets and the rubber boats often start to deflate when there are so many people on them,” Sweetnam added.

"In Libya, you can be killed at any second. Everybody has a gun. I just wanted to go out from there"

The EU’s Operation Sophia, launched last year with the aim of disrupting smuggling networks, destroys wooden boats following a rescue operation so they cannot be retrieved and reused by smugglers. But the smugglers have simply switched to using cheaper, rubber boats, which, according to the senior official, are imported illegally from Tunisia.

“These boats are meant for 10 people maximum, but the smugglers usually put 100-120 people into each one,” he said. “They don’t care about what happens to them at sea. They are just thinking about the money.”

Despite the risks, the demand for smugglers’ services has remained high, in part because many people are so eager to escape the chaos in Libya.

The majority of migrants who set off from Libya are West Africans like Ali, who came to Libya in search of work. During 10 months there, he said he endured torture, imprisonment and being sold by traffickers.

"In Libya, you can be killed at any second. Everybody has a gun. I just wanted to go out from there,” he told IRIN.

Flavio di Giacomo, a spokesman with IOM in Italy, confirmed that many new arrivals said they hadn’t intended to come to Europe but had gone to Libya in search of work.

“We’ve met so many migrants from West Africa who told us that they didn’t have any idea that the situation in Libya was so dangerous,” he told IRIN. “Those who make it to Europe often don’t tell their families back home what they suffered in Libya. They want to be seen as a success. But I’ve met many migrants who were quite upset with their friends. They say, ‘Why didn’t they tell me?’”

IOM recently launched a campaign that uses migrants who’ve made the journey to Europe to warn would-be migrants back home about the dangers they’re likely to encounter in Libya, as well as what they may experience during the sea journey.

All at sea: Libyan detention centres at breaking point

Migrants from the Horn of Africa, particularly Eritreans, appear to have already started steering clear of Libya and increasing numbers are now attempting to set off for Europe from Egypt. Arrivals from Egypt now make up about 10 to 15 percent of all arrivals to Italy, said di Giacomo.

For those who manage to evade the watchful Egyptian authorities, the journey to Italy is even longer from Egypt’s coast than the one from Libya, taking up to 10 days.

“It stretches the search area,” said Sweetnam of MOAS. “And we would need a relationship with Egyptian authorities to be able to do rescues in Egyptian territorial waters.”

MOAS and MSF are among several NGOs that between them are now operating 13 search-and-rescue vessels in this stretch of the Mediterranean. Operation Sophia makes use of five ships from four different countries as well as several aircraft, and the Italian coastguard also plays a crucial coordination role.

And yet, despite all this effort, the deaths have continued and appear to be on the rise. “The area is so large, I suspect we can never fully cover it,” said Sweetnam.