Authorities in western Ukraine are struggling to provide adequate shelter to the growing number of people fleeing fighting between Russian-backed separatists and the Ukrainian army in the east of the country. An estimated 1.3 million Ukrainians have been internally displaced since the conflict began and many have sought refuge in cities in the west.

Marina Zabraznaja, from the small town of Gorlovka near Donetsk, decided to escape the war zone in July 2014 with her 11-year old daughter and 18-month old son, but was unsure where to go.

“I called every government hotline, but I was rejected everywhere. In most cases they didn't even pick up the phone. Then, I just surfed the Internet and found the volunteer center Donbas SOS…they offered me an apartment in Lviv. In the evening I bought a train ticket, the next day I was going to Lviv.”

She is among about 9,500 eastern Ukrainians who have registered as internally displaced people (IDPs) in the western region of Lviv. As more keep arriving, the local government is struggling to house them.

Wasyl Gelbych, from Lviv’s Department of Social Protection, admitted that the city is facing a housing crisis and blamed President Petro Poroshenko’s government for not having developed a strategy to cope with the influx of IDPs from eastern Ukraine:

Currently, we can't help anyone. We have used all our resources and filled all rent-free places that we were able to.

“Currently, we can’t help anyone. We have used all our resources and filled all rent-free places that we were able to,” he told IRIN.

“Now we offer free accommodation only for people who really need it: disabled people, mothers with many children. As a rule, if a family consists of both parents we don't offer accommodation to them. Such families have to rely on themselves,” he added.

The lack of a policy to effectively manage such large numbers of displaced people has been a problem since Ukrainians first began to flee their homes in Crimea in March 2014.

Gelbych explained that at the time: “Every fifth family in Lviv region had people from Crimea living in their apartment free of charge. … Everybody thought that it was temporary”.

The next, much bigger influx of IDPs escaping the Luhansk and Donetsk regions in the early summer of 2014 forced the authorities to mobilise. They turned to the private housing sector and the hospitality industry and IDPs were placed in hostels, hotels, sanatoriums and private properties.

“In general, we have accommodated people in the private sector and this is our accomplishment…90 percent of the IDPs [we have found accommodation for] live in houses and flats,” said Ivan Tymoczko, Lviv’s head of social services.

However, “the private sector” has often meant neglected houses in inaccessible villages.

“When the government provides accommodation, in reality it is something horrible. These are abandoned houses in a terrible condition,” said Evgeniya Velichko, a volunteer at Donbas SOS, a Kiev-based NGO assisting IDPs.

“When a person has nothing and moves to another house, he or she needs certain things to start with. And there is nothing, sometimes not even windows,” she told IRIN.

Those IDPs who arrived during the first few months of the conflict have tended to fare better as many found rooms in shelters run by religious organisations and NGOs.

Jurij Radczenko, a 46 year-old father of six, who was a pastor in Luhansk, did not face many difficulties in organizing a place for his family at a church shelter in the village of Vynnyky close to Lviv. Since September 2014, Radczenko and his wife Natalia and four of their school-age children have been occupying a small room furnished sparsely with two bunk beds, one single bed and a writing desk with a chair.

“We are looking for an apartment, but honestly we can't find one. We are a big family, we are from Luhansk and people just don't want to deal with us. They think that all people from Luhansk are bad,” said Radczenko.

Jurij Radczenko, his wife Natalia and four children, fled the war in eastern Ukraine and are now living in one room at a church shelter in the Lviv region of western Ukraine. 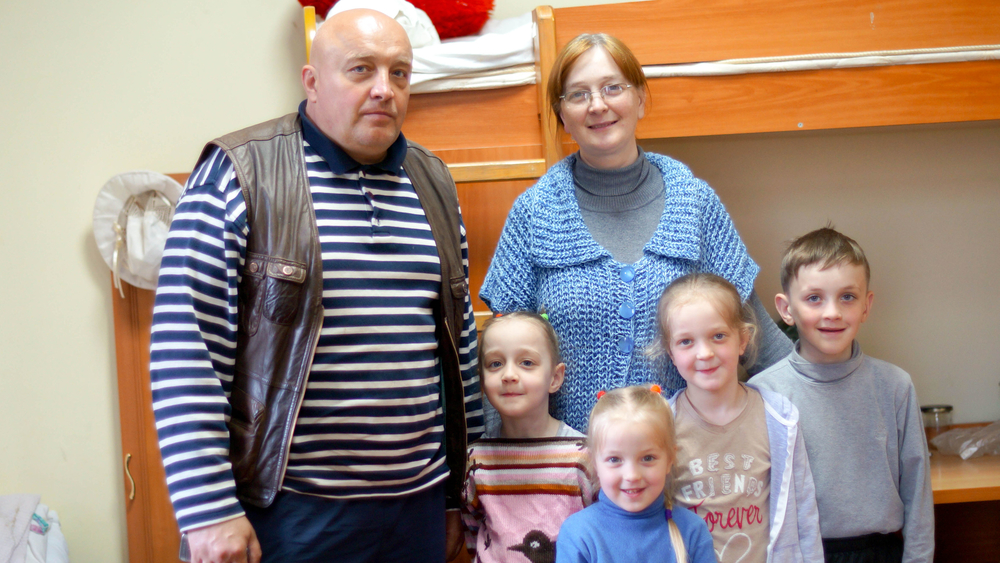 Many IDPs simply lack the means to cover rent having exhausted their savings and been unable to find work.

“Generally, in Ukraine people cannot find employment, not only IDPs,” commented Sergyi Marushenko from the Ministry of Social Policy in Kiev.

He pointed out that out of nearly 38,000 IDPs who had registered at government employment agencies, less than 7,500 had been given jobs. Many others did not even bother registering.

From October 2014 until April 2015, IDPs were eligible for a monthly government stipend of $20 per individual up to a maximum of $110 for a family, which was supposed to help with living costs including rent. After six months, IDPs had to reapply for the stipend, a process that can take months. As a result, many have had no income since April.

Meanwhile, according to Nadia Neszczadenko, director of a Lviv estate agency that specializes in helping IDPs, rental prices have increased dramatically during the last year as a result of the war and now average well over the maximum stipend amount for a family.

“People are hanging in the air, they don't know what to do. They have no jobs, no accommodation and no future,” said Neszczadenko.

“Many people go back home, because they simply don't have any money. But actually they don't know what to do at their destroyed homes either. There were cases where people went back home and then returned here again.”