Read about what we achieved.
LAMWO

When Uganda resident Rose Lamwaka had two sons abducted by the rebel Lord’s Resistance Army (LRA) 10 years ago she felt she had lost all hope. "I was feeling a lot of pain, I was feeling like committing suicide," says the 51-year-old widow with seven grandchildren.

Last week, Lamwaka joined hundreds from the northern district of Lamwo to remember their abducted children, still missing from the decades-long civil war between the LRA and the government. More than 200 family members with relatives still unaccounted for read the names of their lost ones in a ceremony of prayer and song.

Northern Uganda was the epicentre of a legacy of violence, and the International Committee of the Red Cross (ICRC) says the number of people abducted since the war started in the late 1980s ranges between 52,000 and 75,000. Though Uganda has been free from LRA attacks since 2006, and a number of former child soldiers have returned, the ICRC estimates thousands remain missing from the north as a result of the conflict.

"Because there is no official figure of those missing, we had to extrapolate on what we found here," said Camilla Matteucci, ICRC protection coordinator. "And our projection is that at least 10,000 people are still missing in northern Uganda."

The commemoration in Uganda not only acknowledged those still missing but also marked the end of a four-month community counselling pilot programme for more than 200 affected family members of the abducted in Lamwo District. As that project initially targeted only one sub-county, it used those affected families as a baseline to extrapolate the total number that have gone missing across the northern region.

According to Beatrice Ocaya, the local women's councillor in Lamwo, the ceremony was an important step in recognizing the ongoing support needed by families torn apart by the LRA conflict.

"There is no longer war, but some parents are ever crying," she said.

ICRC says relatives left behind have been silently suffering with ambiguous loss, and the isolation that breeds has far-reaching social and economic impacts on populations still recovering from conflict.

Rose Lamwaka speaks at a ceremony for the missing in Lamwo district last week. Lamwaka had two sons abducted by the LRA in Uganda's decades-long civil war 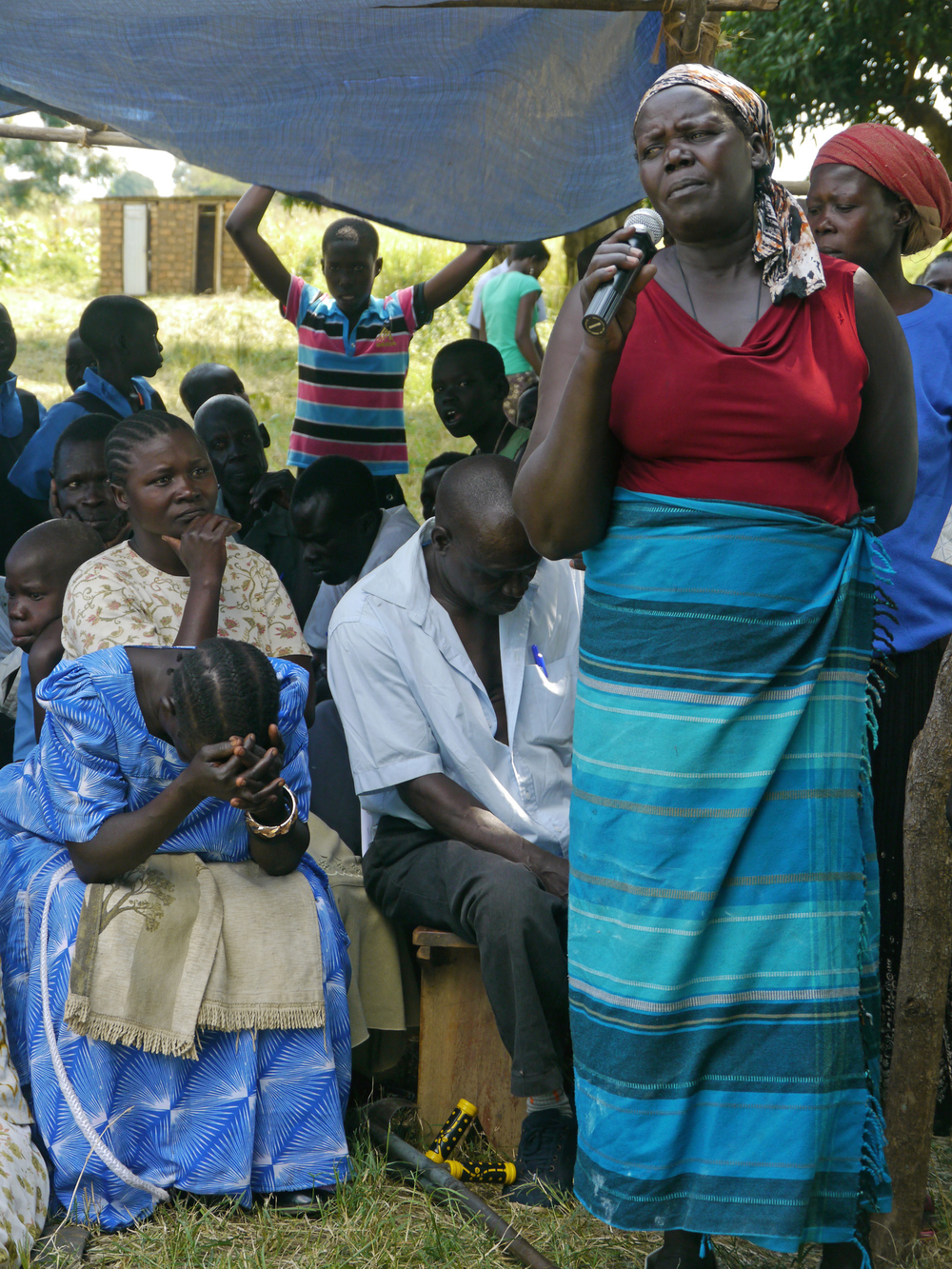 "They don't know if the person is alive or dead, if they're still with the armed group, which also puts a stigma on the family, and therefore it's hard for them to deal with the community at large," Matteucci said.

For Lamwaka, the group brought her relief, and support from her community. "Other people are really understanding, they sympathize and care," she told IRIN.

To mark the International Day of the Victims of Enforced Disappearances on 30 August, the ICRC has released a handbook to call for a broader global response to the families of those missing in conflict and natural disasters. The handbook draws on more than 10 years of similar ICRC projects, from the Balkans, to Nepal and Timor-Leste - all countries where thousands have gone missing with families left behind to bear the burden - and provides an understanding of what families of missing persons go through. It also acts as a practical guide for local "accompaniers" from the community, trained by ICRC to counsel peer support groups to be able to share experiences and coping mechanisms.

"Every year, hundreds of thousands of people are separated from loved ones in such situations," said Marianne Pecassou, head of the ICRC team dealing with missing persons, in a statement. "The families will tell you that what they need more than anything else is to find out what happened to the person who vanished. Unfortunately, in too many cases, that question may never be resolved. But they also have other needs that go far beyond this."

According to ICRC, during the conflicts in Croatia, Bosnia-Herzegovina and Kosovo, they received more than 34,000 tracing requests from families searching for answers.

Legal issues such as inheritance and property rights, the financial stress of searching for the lost while supporting a household, as well as the psychological trauma of loss have devastated communities already scarred by conflict.

According to Milena Osorio, ICRC's mental health and psychosocial support adviser, psychological needs such as emotional isolation, feelings of guilt, anger, depression or trauma, and tensions among family members or with members of their communities are common.

In May, UN Secretary-General Ban Ki-moon urged member states to join an international treaty aimed at "eliminating enforced disappearances and stop impunity for this scourge".