Stronger security is needed for teachers in government schools in Thailand’s deep south, where an ongoing insurgency by Muslim separatist groups has left more than 150 teachers dead since 2004, say officials.

“The best thing we need to do for teachers and workers in the education field is to strengthen security measures,” Thai Education Minister Chaturon Chaisang told IRIN.

His comments come less than a week after a roadside bomb exploded in Chanae District in southern Narathiwat Province, killing two female teachers and seriously wounding one other, in what was described by local media as “the worst day for teachers for months”.

The 24 July attack - for which no party has claimed responsibility - highlights the fragmented nature of the conflict in Thailand’s southernmost provinces of Pattani, Yala and Narathiwat along the border with Malaysia.

According to a recent report by the International Crisis Group (ICG), since 2004 more than 5,000 people, mostly civilians, have lost their lives in the violence which successive governments, beginning with that of former Prime Minister Thaksin Shinawatra (2001-2006), have been unable to control.

Despite recent peace talks between the government and separatists (described by ICG as “a formless movement comprised of autonomous cells operating within a central command”) held in Malaysia aimed at reducing violence during Ramadan, insurgent attacks have increased, according to local media.

Since the peace talks began on 28 February between Thai officials and members of Barisan Revolusi Nasional (BRN) militant group, reported to be one of the main insurgency groups, nearly 50 people have been killed and close to 80 injured.

“It’s difficult [for the children] to catch up with all the lost time due to school closures,” said Boonsom Thongsriprai, chairman of the Confederation of Teachers of the Three Southern Border Provinces.

Since January 2004, ethnic Malay Muslim separatist insurgents have been implicated in the deaths of close to 160 teachers and education personnel from government-run schools, Human Rights Watch (HRW) said in a 2012 report, with teachers and schools (along with soldiers) routinely singled out for attack as representatives of the Thai state.

Some 1,200 government-run schools serving more than 200,000 schoolchildren in four provinces were closed for two days.

On 23 January 2013, Chan Tree, a Muslim third grade teacher, had just begun mid-day prayers in the canteen at the Ban Tanyong school in Narathiwat Province with a room of elementary students when two armed men walked in and shot him. One of the students yelled out: “They're going to shoot you, teacher Chan Tree”, before the men opened fire.

“Some of the teachers quit and some of them transferred. About five or six teachers have transferred to other schools,” Yai Nong Tohleh, another instructor, said afterwards.
Dozens of primary and secondary schools in Narathiwat and Pattani provinces closed down in the weeks that followed the January attack.

One result of the attacks has been teachers leaving their jobs, giving administrators the added difficulty of attracting qualified teachers to replace them, authorities say. 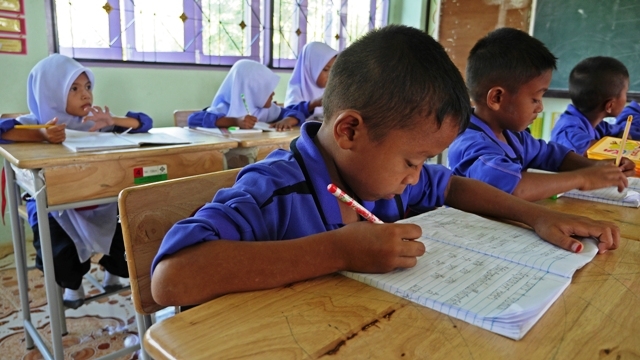 Starting salaries for teachers are about US$400 per month, with additional "danger pay" of roughly $80 per month. The average pay nationwide in this upper middle-income country is nearly $700; salaries lag in the deep south.

“They fear that if they withdraw or transfer themselves out of the south there won’t be sufficient teachers to provide quality education to children,” Sunai Phasuk, a senior researcher for HRW in Thailand, explained.

“That is the incentive for both the Buddhist Thai and Malay Muslim teachers to continue working. That shows the commitment of those teachers who want to provide education to the children even though some of them have been at schools that have been attacked so many times before,” he added.

Meanwhile, many positions continue to be filled locally - with those recruited on temporary contracts and receiving less pay and benefits.

“Right now many of the staff aren't officially appointed or registered because they aren't fully qualified for the position but the government is working on a plan to register many of the new replacements so that they can [receive] better payment,” said Boonsom Thongsriprai.

The informal ceasefire agreed originally by the Thai government and the BRN to coincide with Ramadan ends after 8 August.