Unusually heavy rains have caused havoc across much of east Africa, displacing thousands of people and damaging important infrastructure.

Even normal rains can cause flooding and damage in areas with poor drainage; this year’s heavy rains are already beginning to test the emergency responses in many flood and disaster-prone areas.

The rains, which have “caused significant flooding in the Lake Victoria basin in Uganda and Kenya, the southern Maasai rangelands in Kenya, and along the Wabi Shabelle in Ethiopia in late March and early April”, according to the update, started between mid-March and early April and are likely to continue through May.

In Kenya, at least 18,633 people have been displaced by flooding since the onset of the rains, according to the Kenya Red Cross Society (KRCS). Some 32 deaths have also been recorded, with others being injured.

The number of people displaced could rise to about 30,000 before the rainy season ends, said Nelly Muluka, the KRCS communications manager.

“We are also working on searching for the unaccounted people and sensitizing communities on the need to move to safer areas,” said Muluka. KRCS is distributing food and non-food items to affected families, but there is a need for medical care and additional food and shelter.

Ahead of the rains, Kenya’s meteorological department had warned of generally enhanced rainfall over the western highlands, Lake Basin, central Rift Valley and the central highlands, including Nairobi, in March and April.

“We expected floods in areas like Nairobi, Central, Coastal and Western Kenya, and have already put aside food and non-food items for potential victims,” Andrew Mondoh, the permanent secretary in the Special Programmes Ministry, told IRIN.

In the coastal area of Tana River, hundreds of families marooned by floods have been rescued by helicopter and moved to safer areas, added Mondo.

The rains have also destroyed roads in the Rift Valley areas of Kajiado and Narok and in the western area of Kisumu.

In northeastern Kenya’s Dadaab refugee complex, home to about 463,000 mainly Somali refugees, the rains have displaced some families and affected commodity prices.

Parts of a 90km road, linking the main region of Garissa to the Dadaab refugee complex, have been rendered impassable, affecting transport and commerce.

Movement within the Ifo-1 and Ifo-2 camps becomes especially difficult during the rainy season due to flooding, which makes aid delivery difficult.

“It is a mixture of sad[ness] and happiness during the rainy season in Dadaab; we really need the rain because it is always very hot and we get more milk from the neighbouring locations, but we have no proper shelter and the prices of some foodstuffs become higher,” said Muhubo Aden Kusow, who runs a grocery store at one of the Ifo camps.

The heavy rains are expected to continue over the next two weeks, according to Ayub Shaka, the deputy director of Kenya’s Department of Meteorological Services. “It is difficult to say where floods will occur in the next two weeks for example, but the best we can do is to ask people living in flood-prone areas to stay alert and safe,” said Shaka.

In neighbouring Somalia, heavy rains were recorded in the first week of April.

“Many local areas have already experienced more than three times their normal rainfall accumulation since the beginning of April, sustaining the risk for localized flash flooding and downstream river inundation over the Jubba and Shabelle River basins in eastern Ethiopia and southern Somalia.”

The Shabelle has already burst its banks in some places, according to a 10 April Shabelle River flood update by the UN Food and Agriculture Organization.

“SWALIM [Somalia Water and Land Information Management] field reports in the last two days indicate river breakages at Hurway (about 8m wide), Eji (about 6m wide) and Maadheere (about 14m wide) villages all in Middle Shabelle Region. This has led to inundation of large areas, causing destruction of cropped area[s] of unconfirmed acreage, and displacement of several families.”

The southern and eastern regions of Ethiopia have also received “heavy and well-distributed precipitation totals”, according to the Africa Hazards Outlook, “with lesser amounts observed in the west and higher elevations of the country.”

“This has already negatively affected cropping activities, with a reduction of planting over many local Belg [February-May rains]-producing areas of Ethiopia,” it says.

With the rains expected to continue, efforts are underway to mitigate their adverse effects.

According to Uganda’s chief weather forecaster, Deus Bamanya, there is an increased likelihood of near-normal to above-normal rainfall over most parts of Uganda, with the rains peaking between mid-April and early-May. Flash flooding could also occur in areas expected to receive below-normal rainfall due to sporadic heavy downpours. 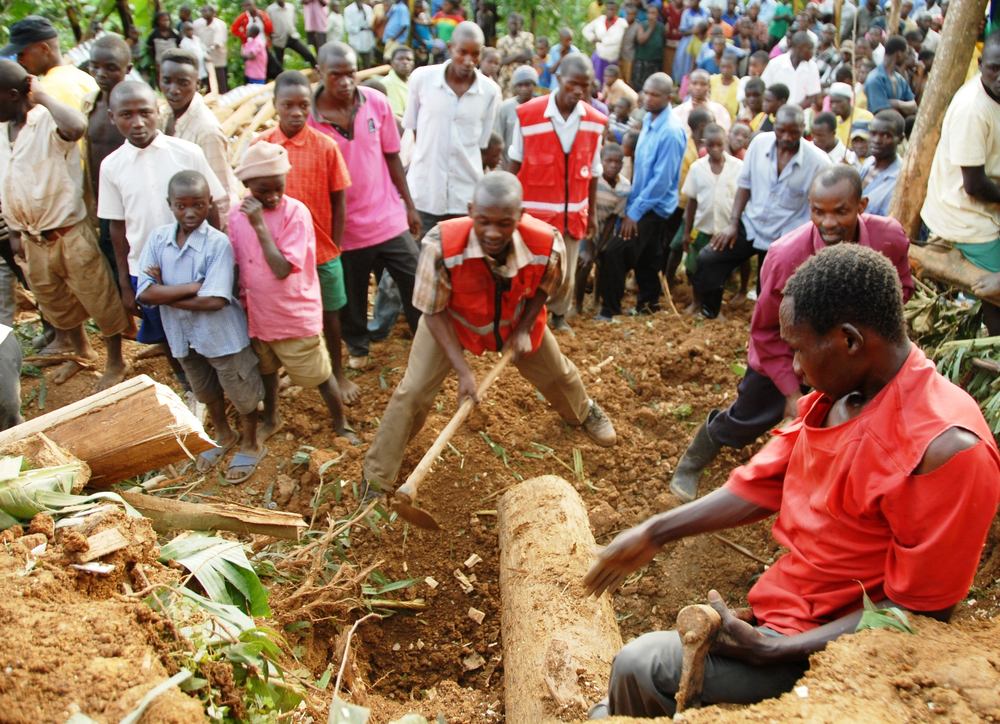 The government plans to relocate vulnerable populations living in the eastern Mount Elgon region, which is prone to flooding and landslides.

“We are worried [about] landslides, mudslides and flooding. There are already signs in the low-lying and hilly and mountainous areas,” Musa Ecweru, Uganda’s state minister for relief, disaster preparedness and refugees, told IRIN.

“The effects of the heavy rains last year were very devastating. We don’t want [a]repeat. We are going to relocate people in these vulnerable areas. We are only waiting for resources from our development partners to start the relocation exercise,” said Ecweru. The Ugandan government requires some 35 billion shillings (about US$13.5 million) for the exercise.

“We are going to de-gazette some government land to relocate these vulnerable populations. We are negotiating with [the] Uganda Wildlife Authority to have this done immediately. We must [re]settle these people as quick[ly] as possible,” he added.

The districts of Mbale, Tororo, Kalangala, Bundibugyo and Masaka are among those most affected by hailstorms, according to Catherine Ntabadde-Makumbi, the Uganda Red Cross Society assistant communications director, who added that at least 8,362 people remain without assistance, with 5,681 of them displaced. The displaced are in urgent need of shelter kits, household items and water purifying tablets.

In Burundi, flood-affected areas include the northwestern region of Bubanza, Bujumbura City and the plains of Imbo along the shores of Lake Tanganyika.

"We have a problem with rain in the town of Gihanga [in Bubanza]. Houses and plantations were destroyed, causing the displacement of people and stopping work in the fields," Anselme Wakana, governor of Bubanza Province, told IRIN.

At least 1,000 hectares of rice has been damaged there, raising food security fears. "We are harvesting rice that was not yet mature due to fear of flooding," said farmer Olive Ngayimpenda.

Several homes have been destroyed in the areas of Gihanga.

According to Mbonerane Albert, the president of the local NGO Green Belt Action, the situation could worsen due to environmental degradation: deforestation in Bubanza has increased surface runoff, increasing the risk of flooding.

In neighbouring Rwanda, authorities have issued disaster warnings to those living in risk-prone areas.

"High-risk-zone dwellers have [been] given [a] new eviction ultimatum to relocate since we noticed that expected heavy rainfall could affect the vulnerable populations," Antoine Ruvebana, the permanent secretary in the Ministry of Refugees Affairs and Disaster Management, told IRIN.

Rwanda, due its hilly terrain, is susceptible to erosion, flooding and landslides.

According to the Rwandan meteorological services department, several western parts of the country could get ''above-normal rainfall'' during the mid-April to May 2013 period.