More than five months after a second wave of communal violence between Buddhists and Muslim Rohingyas rocked Myanmar’s western Rakhine State, thousands of displaced say they are not receiving official aid because they are not recognized by the government.

Deadly sectarian clashes in June and October 2012 left 167 dead, hundreds injured and over 120,000 displaced. More than 10,000 homes were burned or destroyed.

“We’ve tried and still want to move to the official camps, but the government won’t give us space in them,” said Shafi Ul Alam, an imam at the Maw Thanu Ya site, an unofficial camp that has been home to more than 1,000 Rohingya internally displaced persons (IDPs) since October.

In June, at the start of the violence, the site’s IDPs sought refuge in schools and madrasas, but by October, because of extreme overcrowding, they were forced to relocate to their current site, a sun-drenched field adjacent an official camp.

Shafi Ul Alam says residents have received no food or shelter from the government or NGOs.

He said the camp relies on intermittent food donations from Muslims in the area who have not been displaced. But, he said, their dependence on ad hoc donations leave them in constant need.

“We receive food donations that will last 10 or 15 days, and then we have to hope for the next donation,” he said.

There are more than 1,000 Rohingyas living in Maw Thanu Ya, an unofficial IDP camp not far from Sittwe, served by just a handful of latrines and a few water pumps 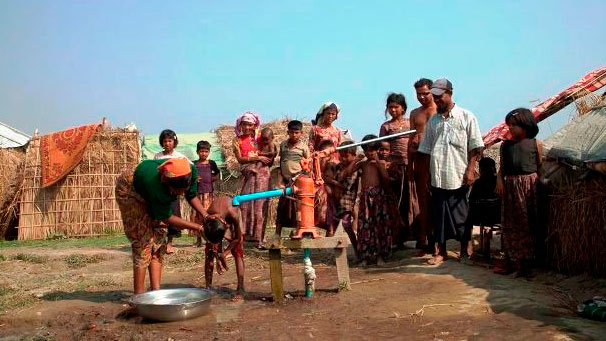 Government numbers indicate there are over 120,000 IDPs in Rakhine living in almost 90 camps. But how many IDPs are actually unregistered and falling through the cracks remains unclear, aid workers say.

According to a statement by Médecins Sans Frontières (MSF) in February, tens of thousands of people are still unable to access urgently needed medical care.

The government gave permission for the displaced to seek refuge in buffered safe zones, but it has restricted the number of such sites it will sanction, leaving many Muslim IDPs with unofficial status, aid workers say.

No status, no aid

The designation comes with severe consequences: unregistered IDPs receive little to none of the government or international assistance that is delivered to official camps.

Like all Muslims in Rakhine State under present conditions, Maw Thanu Ya’s IDPs are restricted from travelling to work in nearby towns. They are also without supplies or space for farming.

“We are completely dependent on donations,” said one man in his 50s. “We may soon need to start to beg for food in the other camps.”

Unlike in official camps, where residents are supplied with waterproof tents, residents of Maw Thanu Ya sleep in tiny huts constructed of thatched straw. And the camp’s population is served by only a handful of latrines.

These poor conditions are taking an evident toll. Many infants in Maw Thanu Yaw have distended bellies as well as sores and rashes on their skin.

International aid groups have reported high cases of respiratory and skin infections, worms and diarrhoea, as well as “alarming” rates of malnourished children in camps they have visited. Aid workers say the prevalence of these health problems among the unregistered displaced, whom they are largely prohibited from visiting, is likely considerably higher.

“It is among people living in makeshift camps in rice fields or other crowded strips of land that MSF is seeing the most acute medical needs,” Arjan Hehenkamp, MSF’s general director, said in February. “Ongoing insecurity and repeated threats and intimidation by a small but vocal group within the Rakhine community have severely impacted on our ability to deliver lifesaving medical care.”

Mariam Khatu, 45, a mother of seven whose home was torched in June, said many children in the Maw Thanu Ya unofficial camp were sick with high fevers and severe stomach pain.

Specific diagnoses of their ailments were impossible to determine, she said, as no nurses or doctors had ever visited their camp. Unless someone is near death, the camp’s residents are unable to send them to the nearest clinic, she added.

At another unofficial camp in the area, some 1,700 Muslim IDPs are served by just four latrines.

Residents of the site, which is so makeshift that it has not been named, say no doctors have ever visited.

The husband of Lila Begum was killed during the violence last year. She has five children and is just weeks away from giving birth to another.

“I have nothing, and there are no facilities here so I have no choice but to deliver here,” she said, pointing to her tiny straw shelter.