A humanitarian crisis has been brewing for the past six months on the Venezuela-Colombia border, where COVID-19 lockdown measures have had a devastating effect on Indigenous and migrant communities strained by the influx of tens of thousands of Venezuelan returnees.

Some five million Venezuelans fled into the wider region as their country’s economy and health system collapsed from 2015 onwards. But the coronavirus has frozen economies across Latin America and reversed this exodus, leaving Colombian border communities reeling from chronic shortages of medical attention and food, as well as increased violence.

La Guajira, an arid Indigenous region in northeastern Colombia, is grappling with a medical system near collapse, while the aid response in Cúcuta, the only open border crossing to Venezuela, is strained by long waits at official immigration points, even as violence spikes along the informal migration and smuggling routes controlled by armed criminals.

A January report from the UN-managed Coordination Platform for Refugees and Migrants from Venezuela estimated that roughly 95,000 Venezuelan migrants in La Guajira alone were in “critical need”, chiefly because of food insecurity and the lack of access to healthcare in the border region.

“The needs of the population were alarming at the beginning of the year,” Marcela Bustamante, regional representative for HelpAge, an NGO working with the elderly in La Guajira, told The New Humanitarian by phone. “But they have now plumbed new depths.”

Colombia and Venezuela both imposed complete lockdowns in March, along with most of Latin America, as case numbers began to grow exponentially. Colombia had reported 777,000 confirmed cases of COVID-19 and 24,570 deaths as of 22 September. Venezuela officially reports 67,000 cases and just over 500 deaths, but testing is virtually non-existent and health experts suggest the real numbers are far higher.

Colombia has recently relaxed its strict quarantine measures, and while aid workers hope a slowly reopening economy will improve the situation, many border communities, for now, find themselves in a critical state.

From bad to worse in La Guajira

La Guajira has long been neglected by the federal government and is largely self-administered by the Wayúu, a diverse Indigeneous community of 23 official clans whose territory stretches across the border into Venezuela.

In the Wayúu language, Guajira means “our land”, reflecting an Indigenous region that has largely resisted attempts at colonisation. For residents, the division between the two countries does not exist: They see both sides as part of the same ancestral nation.

According to the National Administrative Department of Statistics in Colombia (DANE by its Spanish acronym), 92 percent of residents in the region live in poverty. Outside of its capital in Colombia, Riohacha, La Guajira is almost entirely without a functioning medical system: Three hospitals serve a mostly rural population of roughly 900,000.

Long before the arrival of COVID-19, La Guajira suffered from malnutrition and water shortages that humanitarian groups say are the leading cause of death among children in the region – especially among Indigenous communities.

La Guajira's proximity to Venezuela has also made it a destination for migrants, leading to dozens of informal encampments springing up all along the border. The impromptu shelters are overcrowded and unsanitary and have become epicentres of an expanding health crisis. 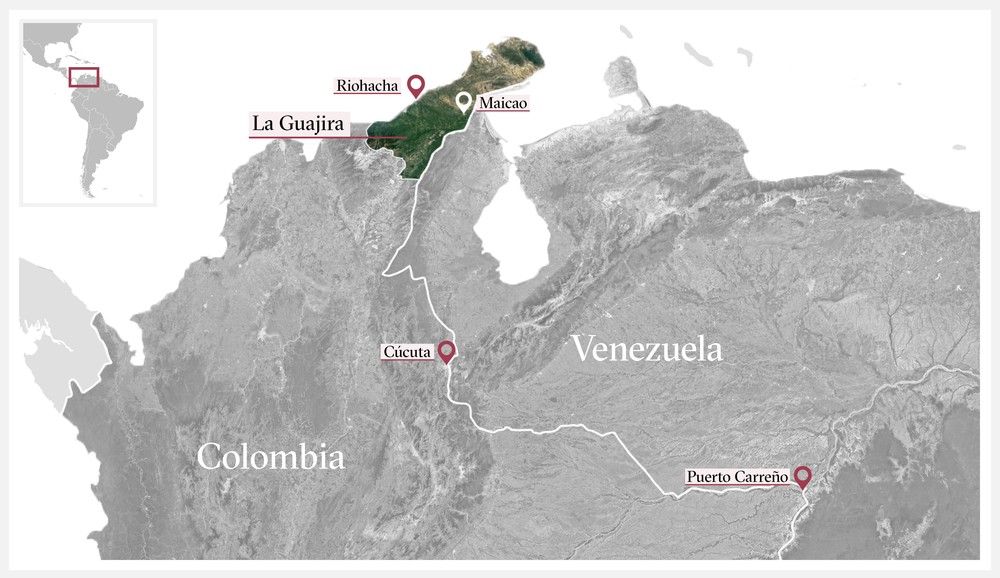 Quarantine measures have forced many people who lived in the streets into informal encampments, further straining the resources of the local government and NGOs. These settlements are little more than shacks, built from recovered materials such as plywood, plastic, and sheet-metal.

“In Maicao alone, there are 15 shelters that house about 300 people each,” explained Yeimy Nassir, who runs a migrant and refugee shelter for the Catholic church’s Pastoral Social in Maicao – La Guajira’s main urban centre near the Venezuelan border.

“The houses have no water, no electricity, no drainage, nothing. Many of these people depend completely on community kitchens that are now closed due to the pandemic,” Nassir said, referring to church-run food centres and nutrition kits provided by NGOs.

“For every 10 migrants in our care who are sick, one is dying [from a terminal condition]. The most vulnerable are those who already have previous illnesses such as HIV or pneumonia. The saddest part is that if a migrant dies here, there are no resources for their funeral expenses; no way to bury them properly.”

Further complicating matters, as the economic crisis and lawlessness in Venezuela have increased in recent years, more and more Venezuelan Wayúu have also crossed into Colombia, alongside other migrants.

“For every 10 migrants in our care who are sick, one is dying.”

“The Venezuelan Wayúu are from other tribes, with other customs. It’s even more difficult for them than Colombian Indigenous communities,” said José Gonzales, coordinator of the Human Rights Committee of La Guajira, an Indigenous governmental group on the Venezuelan side of the border. He described a population in dire conditions confronting not only COVID-19 outbreaks, but also widespread hunger and malnutrition.

“We need a response from the national government. We need them to bring food and drinking water,” Gonzales told TNH. “We registered more than 200 cases of malnutrition in children and adults. People are starving. An entire family recently died from food poisoning after they ate a poisonous blowfish out of desperation.”

Between the beginning of Colombia’s lockdown in March and late August, more than 100,000 Venezuelans have returned, according to Colombian immigration – many fleeing on foot, and facing scarcity and violence on the frontier.

Whether in La Guajira or elsewhere along the border where formal crossings remain closed, the use of dangerous informal routes known as trochas is common.

Pastoral Social, which also runs shelters in Puerto Carreño – another point along Colombia’s central-eastern border – confirmed that these crossings remain busy despite the COVID-19 restrictions that are supposed to have effectively closed the border.

“The truth is that much more help is needed. There is too much hunger.”

“Of the 2,000 migrants we housed at the beginning of the year, more than 60 percent have returned [to Venezuela] since the quarantine began,” said Guillermo Giraldo, the organisation’s director. “The state has prioritised resources to assist the Colombian people, and has reduced the resources to assist the migrant population. We have been forced to reduce the amount of food we can provide people, who have been left without any possibility of obtaining work.”

The UN’s refugee agency, UNHCR, and the World Health Organization are assisting church groups, as well as a number of NGOs such as UNICEF and World Vision, to provide integration assistance in the border region to migrants, as well as nutrition kits, protective medical equipment, and hygiene training.

“We are also working with UNHCR and WHO,” Giraldo said. “But the truth is that much more help is needed. There is too much hunger. We are hoping the loosening of lockdown measures helps, but so far we have seen little difference.”

International aid groups have also reported dwindling resources. A joint coordination plan announced by UNICEF, the UN, the WHO, and local authorities said shortages of medicine and food for those in the improvised encampments were made worse by the reduced mobility of humanitarian workers due to the lockdowns. Colombia’s regulations prohibited domestic travel without special permission from the government and imposed strict curfews as well as shuttered any businesses deemed non-essential. 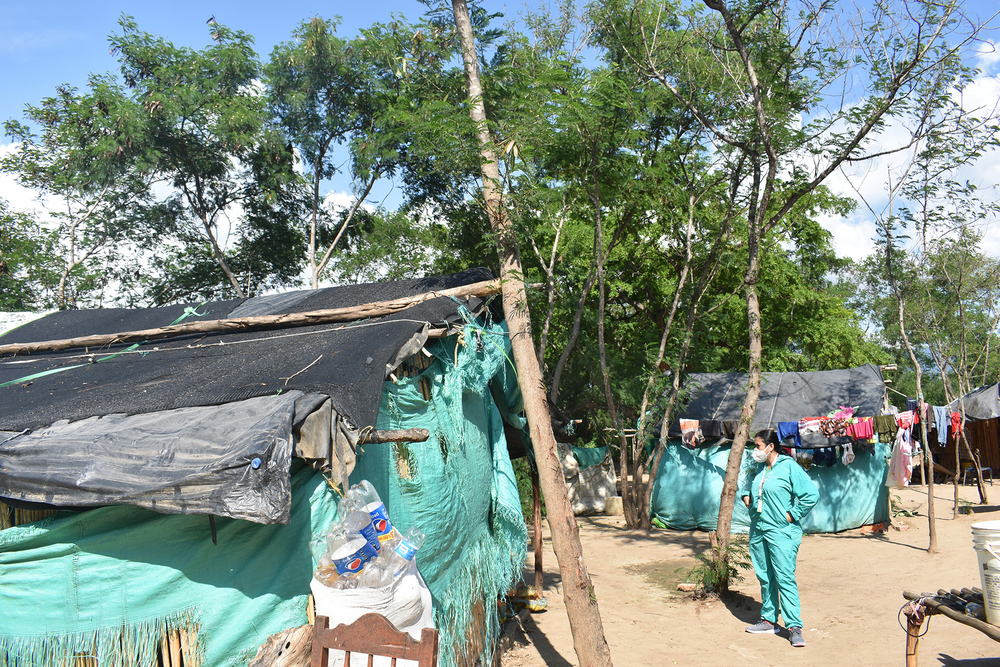 Ulises Haidar/TNH
Yukpa head nurse Leidy Tiria is in charge of maintaining an “epidemiological fence” in her Indigenous community near Cúcuta.

“Since the pandemic began, the number of settlements has increased and our medical missions to the field are finding evidence of widespread hunger among migrant and Indigenous communities,” Mabis Mercado Rua, head of public relations at the Hospital San José de Maicao, told TNH by phone. “Fifteen percent of children from migrant and Indigenous communities coming for medical consultations suffer acute malnutrition.”

“COVID cases have also tied up care units we use for surgeries and births,” continued Rua. “[The government] promised to deliver medical supplies and financial resources for the crisis, but we haven’t received anything.”

Asked for comment, a spokesperson for the Colombian Ministry of Health provided the following statement by email: “Colombia is currently dealing with an unparalleled national health emergency. We are monitoring the situation [in La Guajira] closely. Ten ICU beds were delivered to Guajira on 31 August and we have earmarked 50 million pesos (roughly $13,500) to assist and implement the emergency response plan of Governor Nemesio Roys Garzón.”

Called back by TNH on 16 September, Rua from the hospital in Maicao confirmed that the shipment of ICU units had arrived but not the promised financing. “I’m afraid we will be facing a total collapse if the situation isn’t remedied,” she added.

Further south, in Cúcuta, a spike in violence unparalleled since the height of Colombia’s 50-year civil war in a region long known for conflict has compounded difficulties for the returnees amidst the pandemic.

After many Venezuelan migrants lost their jobs in Colombia following the country’s lockdown in March, President Nicolás Maduro initially promised them a warm welcome. “All must be received with love, warmth, and all preventive measures,” he said on state TV in April, emphasising that those returning would be tested for COVID-19 and processed quickly.

People being carried across a river at the Colombia-Venezuela border near Cúcuta, Colombia. While these illegal crossings are becoming ever more dangerous, some are still willing to take the risk. (Bernardo Arias/TNH)

The rising numbers of those returning to Venezuela have resulted in bottlenecks on both sides of the border, with nearly 40,000 people in Cúcuta waiting to cross in early September, according to Colombian immigration.

Four times a week, 200 people are allowed into Venezuela through a “humanitarian corridor” established by both countries. They end up in open-air quarantine camps in Venezuela, although it’s not clear for how long, and the Venezuelan government has provided no numbers on those forced into quarantine since May.

Many more use the illegal and dangerous smuggling routes instead, often to avoid being held for indeterminate periods in squalid quarantine conditions under military guard, and without sufficient food or medical care, as was confirmed to TNH by multiple phone conversations with those in the camps.

As the number of coronavirus cases has risen within Venezuela, Maduro’s rhetoric has grown darker. He referred to Venezuelans waiting to return home as “biological weapons”, and accused – providing no evidence – Colombian officials of deliberately infecting returning Venezuelans with COVID-19.

The precarious smuggling trails near Cúcuta have remained mostly open, despite rising violence as Colombian armed groups battle one another for control. Venezuelan officials have recently enacted stricter measures in an effort to assert control over a border long known for its porousness, trying to police the trochas and even attacking the armed groups.

A report on violence on the Venezuelan side of the border by FundaRedes, an NGO, in June, found almost double the number of disappeared persons, and 30 percent more murders in the area in 2020 compared to the same period in 2019.

On the Colombian side, three mass killings have been reported by local media in the department of Norte de Santander – around Cúcuta – since quarantine began. Aid groups have also reported new displacements in the border areas, principally due to fighting between National Liberation Army (ELN) and the Rastrojos, a Colombian paramilitary organisation.

Such stories may be proving decisive for many Venezuelan returnees who, despite the unsanitary and dangerous conditions in the quarantine camps, are increasingly choosing long waits in improvised encampments in Colombia to cross officially rather than risk violence at the hands of the various state and non-state armed groups.

With additional reporting from Ulises Haidar in Cúcuta, Colombia.