More than two years after Iraq declared victory over so-called Islamic State, 1.4 million Iraqis are still to return to their homes.

In an effort to end the prolonged displacement, the government has been pushing residents of camps across northern Iraq to go back. Some 31,000 families – around 186,000 people – left or were forced to leave camps in 2019, according to official data provided by the Norwegian Refugee Council (NRC).

But reconstruction is progressing at a snail’s pace – most noticeably in Iraq’s second city of Mosul. Nine of the 14 camps in northern Nineveh province, where Mosul is the provincial capital and biggest city, were closed last year, and many leaving them have found little to return to.

In Mosul alone, 138,000 houses were damaged or destroyed, either by IS or the fight against the extremist group. Many homes have not been rebuilt since the city was liberated by Iraqi forces in July 2017, and renting or buying new property is often prohibitively expensive.

While nearly 4.6 million people have gone home across the country, Iraq has not come up with a unified plan on what to do about those who cannot, at the same time as it struggles to lead a large-scale recovery effort, tackle corruption, and deliver jobs and basic services; the original fire for anti-government protests that have been evolving since late last year.

Facing little to no economic opportunities – and in some cases the fear of retaliation due to real or perceived affiliation to IS – some Mosul returnees have since gone back to Nineveh’s five remaining overstretched encampments.

That includes people like 27-year-old Raja Jaas and her six children, who The New Humanitarian found huddled around a gas heater in a tarpaulin tent at Nineveh’s Hasansham U2 camp, which was opened in 2017 to house people fleeing west Mosul.

It sits about 50 kilometres east of Mosul, and is now home to more than 4,000 people, where days of rain have left puddles and heaps of mud. A pungent smell of damp hangs in the air, mixing with the gas that provides some relief from the piercing cold. 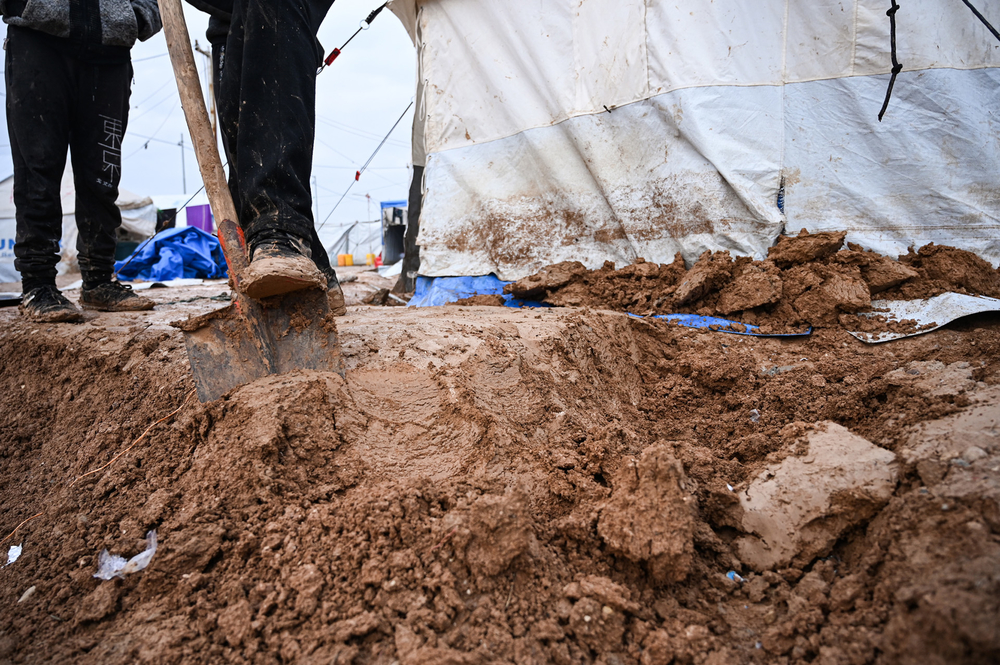 Finbar Anderson/TNH
Young men pile dirt on the edges of their newly constructed tent in Hasansham U2, one of the remaining camps in Iraq's northern Nineveh province.

When Jaas and her family fled IS-controlled Mosul in 2017, they found refuge in UNHCR’s Hamam al-Alil (HAA) camp, south of Mosul. In August, as pressure to leave the camp mounted, they boarded a white bus bearing the emblem of Iraq’s transport ministry and reached their semi-destroyed home, where they attempted to piece their life back together.

Ahmad Jaas, Raja’s husband and the family’s breadwinner, hoped he would be able to find stability in the city. Instead, he found employment opportunities few and far between, and felt they had little choice but to move back to one of the five remaining camps in December.

“There was nothing. No work, no money, nothing,” he told TNH. “At least here there is peace.”

The camp closures are part of a months-long nationwide effort to bring an end to displacement across Iraq.

While there had already been reports of forced or coerced returns driven by various provincial-level policies, the pace appears to have quickened after a July decision by Iraq’s National Security Council reportedly ordered all displaced people to leave the camps.

The decision, called “Resolution 16”, was not made public and did not go through parliament, but its content was described to human rights organisations, including Human Rights Watch.

Camp closures have intensified since, with a particular uptick last August when the number of families departing camps across Iraq nearly doubled from the previous month (4,226 families, compared to 2,312 families in July), according to the UN’s refugee agency, UNHCR.

Some families, like Raja and Ahmad’s, say they felt they had no choice but to return to their home regions despite fears for their safety.

Ahmad said his family was never involved with the extremist group but their Mosul home was still raided several times, both by the Iraqi army and the Popular Mobilisation Forces (PMF or Hashd al-Shaabi) – a group of mostly Shia militias that backed the army in its fight against IS and has since officially been brought under the umbrella of Iraq’s security forces.

“They came during the night and barged into the house,” Ahmad said. “The children were afraid.” Ahmad said Sunni returnees like them are frequently the target of raids in Mosul.

TNH asked Iraq’s Ministry of Displacement and Migration about the rationale behind camp closures and the content of Resolution 16, but a representative declined to comment.

Ali Akram Albayati, a member of Iraq’s High Commission for Human Rights – the country’s government-funded rights watchdog – told TNH that the government’s decision to close camps was inevitable in able to avoid protracted displacement, but not enough had been done to prepare the ground for return.

“We discussed this with the Ministry of Migration [and Displacement] and other institutions and there was an agreement to support their return by taking some preparatory actions, including assuring the availability of infrastructure, giving [financial support], and even offering a new tent for them if there is a problem,” Albayati said.

But most of these support structures never materialised, according to Albayati. “The government didn’t take any real action,” he said. “Some IDPs returned to areas without infrastructure with some [being rejected] by the communities.”

Return to a desolated city

Some people are going back to Mosul, although the exact numbers are hard to gauge. UNHCR puts the total of displaced individuals in Nineveh province at 334,788, down from 576,030 in March 2019.

Hanee Abdallah is one of few west Mosul residents who moved back to the Old City, which saw heavy fighting and airstrikes during the fight against IS, and now lies largely in ruins.

Perched atop a gentle slope overlooking the Tigris, her home is hard to miss. It has a freshly painted white trim around the windows that makes the crimson of the walls pop. It is also one of the few ones standing.

But Mosul’s Civil Defense forces have yet to clear all the rubble or complete the recovery of dead bodies, which some city residents allege is causing the spread of skin rashes and other illnesses.

The United Nations Development Programme (UNDP) says it is currently rehabilitating 15,000 houses in west Mosul, bringing the total number of houses that will have had partial repairs to more than 30,000.

But UNDP only does “rehabilitation”, which includes partial repairs on homes and shops. Reconstruction is in the hands of the government, and entire neighbourhoods still lie in ruins, fuelling frustration amongst Mosul residents who, according to the UN’s migration agency, IOM, perceive the process as slow, corrupt, and uneven.

In April, it was reported that officials from Nineveh province had embezzled a total of $64 million in public funds, including nearly $40 million set aside to rebuild Mosul.

While Mosul waits, Nineveh’s remaining camps, like Hasansham U2, continue to take in more people, and the Barzani Charity Foundation (BCF), a local Kurdish organisation that works in the camp alongside UNHCR, says it is struggling to meet the demand.

According to a report released this week by IOM, more than 37,000 people were “re-displaced” in Iraq between March 2018 and December of last year, meaning they tried to go home but left again because they found life there untenable. Nineveh had the highest number of re-displacements of any province in Iraq, at 25,500 people. 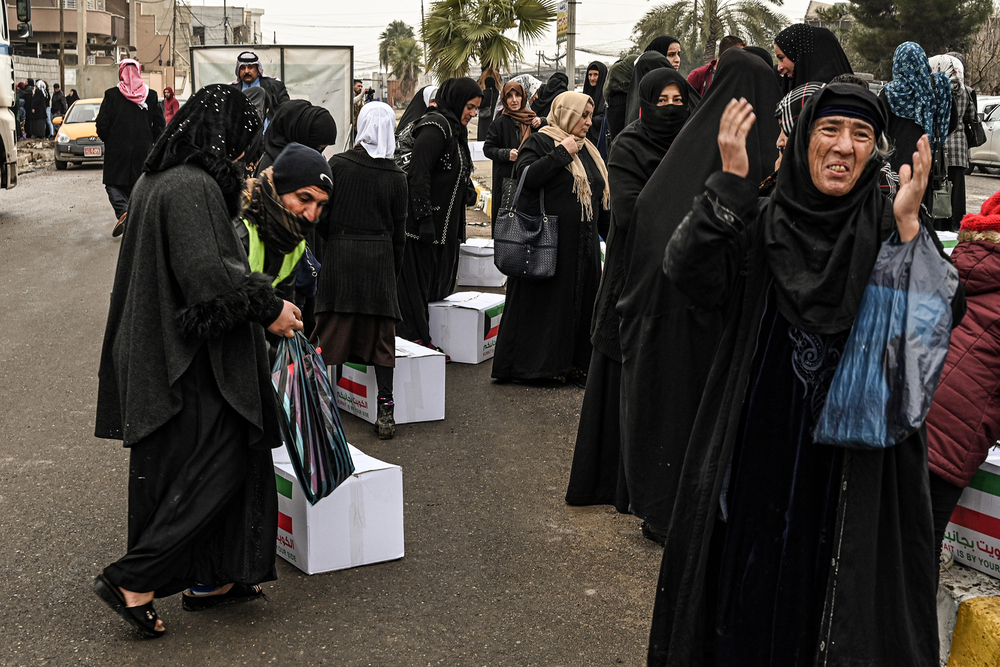 Finbar Anderson/TNH
Women gather at an aid distribution in east Mosul, where many businesses and homes were damaged or destroyed.

“People are migrating away from the city and back to the camps,” said Rizgar Obed, head of BCF’s office in Nineveh province. “I urge the Iraqi government to focus on Mosul and provide jobs for these people, because this [level of] deprivation will cause more social problems.”

Everyone agrees that long-term residence in camps is not ideal. IOM has said that extended stays may hinder access to essential services, increase exposure to security risks, and exacerbate social stigma.

But leaving the camps is simply not an option for everyone, including Raja and Ahmad Jaas, who found it just too hard at home, as well as those who are seen as affiliated with IS.

On a cold evening in Hasansham U2 camp, mother of five Salma made bread in a clay oven as she explained why she doesn’t foresee returning to Mosul anytime soon.

Salma, who asked that a pseudonym be published instead of her real name because her husband was a member of IS, is taking care of her family in a camp while her husband serves a sentence in Baghdad, having been convicted of terrorism charges.

One necessity of going home would be obtaining legal documents for her children, some of whom were born under IS and don’t have government-issued papers. This would require her to disavow her husband and his actions.

But her refusal is firm: “I will not do that.”

Helen Baker, NRC’s communication officer in Iraq, said the organisation offers free legal help to women in Salma’s position, but many like her refuse to embark on the process.

A wife’s disavowal of her husband can be used in court as proof of the man’s affiliation to IS. “If the wife accuses him of being an ISIS member, his family might take revenge. This is a risk they face,” Baker explained.

Others choose not to go through the lengthy bureaucratic process because they fear being exposed to sexual harassment at the hands of the officers managing their case, or because they consider their husbands unwilling IS collaborators rather than affiliates.

NRC estimates that about 45,000 children in camps across Iraq are missing birth certificates or other civil documentation, putting them at high risk of being sentenced to a life on the margins of Iraqi society.

“They cannot go get married or work. They can get simple medical treatment, but not things like surgery,” Baker said. “They are losing all their rights, and they are victims of this situation.”

According to Albayati, the return of IS affiliates “will need special reconciliation programmes”, and the implementation of these will take time.

While they wait, HRW has documented cases in which IDPs have falsely accused other camp residents of supporting or joining IS to settle scores with or retaliate against personal enemies and rivals.

BCF’s Obed said security forces and even aid workers have at times harassed families who are increasingly associated with IS due solely to their presence in camps.

Obed said his organisation was doing all it could to keep them safe. “We don’t care who is an IS affiliate and who isn’t,” he said. “We see them as people in need.”