This article is part of our in-depth coverage. Read more like this...
FORÉCARIAH, Guinea

Although Alsény Touré managed to escape the West African Ebola epidemic, the shadow of the disease still lingers over his life. On most days he’s grateful he survived when more than 11,000 people in three countries didn’t. On some, he’s not so sure.

Touré, from the small town of Forécariah in southern Guinea, is far from alone in his sorrow. As many as 17,000 people were infected yet survived the 2013-2016 outbreak in Guinea, Liberia, and Sierra Leone. Although data on their mental health over the long term is patchy, it does point to widespread trauma and depression – experiences confirmed in over 20 interviews The New Humanitarian conducted with survivors in Guinea.

Today, the Democratic Republic of Congo is facing the second largest (after West Africa) Ebola outbreak ever – 1,147 lives lost out of 1,739 known cases. Conflict and distrust of the response in the affected northeastern provinces of North Kivu and Ituri mean it could take many months, years even, to contain. But that won’t make it over for survivors.

The shockwaves of Congo’s epidemic will be felt long after the last patient is cured, and the experiences of people like Touré will be crucial in learning how people can cope with the after-effects of such a devastating virus.

“By 6am, it was only me and my daughter. All of the others had died.”

Four years after being infected, Touré is still processing what happened. He remembers when Ebola first hit his town in December 2014. He brought his mother to the treatment centre, then two sisters, and then his father. Within a week all were dead, with the exception of one sister.

He and his four-year-old daughter were next to fall sick. On their first evening in the treatment centre, he counted 13 people. “By 6am, it was only me and my daughter. All of the others had died.”

Less than a week later, Touré’s wife fell sick too, and quickly passed away. Then his 18-month-old son contracted the disease. He signed a waiver and was allowed back inside the centre, standing by his son’s bedside until he, eventually, pulled through.

When he was sick in the treatment centre, Touré’s family kept calling him, warning him to refuse the food and medicines provided. They said it was tainted with the disease – a common rumour during the epidemic as people tried to rationalise the death toll. It took courage, but Touré said: “I entrusted myself to God; I accepted to take the medicines; I accepted to eat.” And he ensured his children did as well. 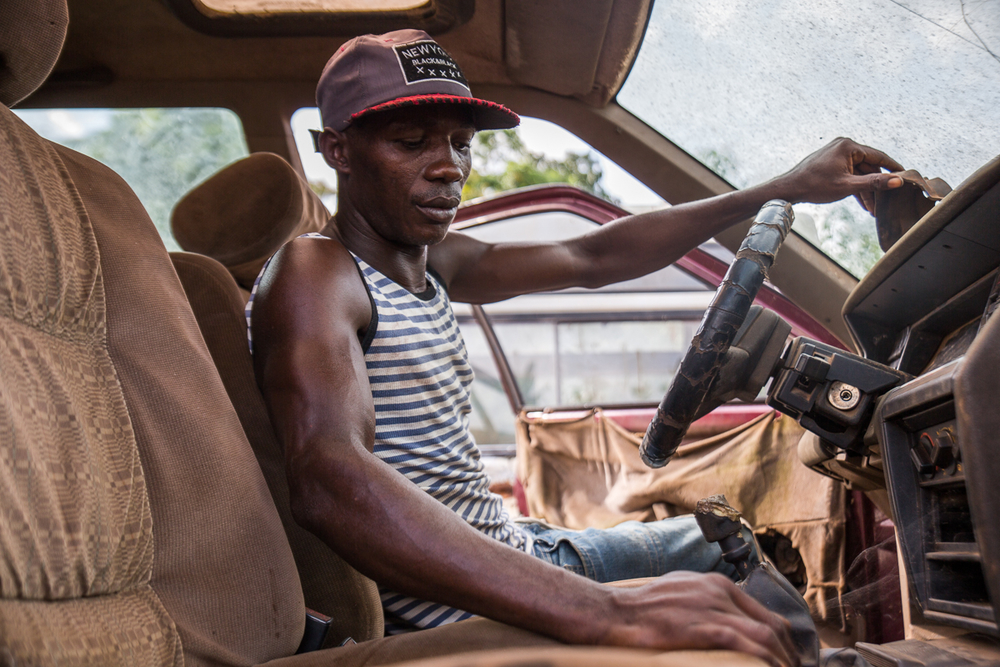 Emmanuel Freudenthal/TNH
“I had no desire to live.” Alsény Touré, struggles with depression after surviving Ebola but losing his wife, mother, father, and so many others.

The extreme mortality rate of Ebola – from 60 to 70 percent – is terrifying. In responding to the outbreak, culture matters – how the dynamics of the disease are understood by the local population can be crucial.

West African communities often distrusted the response effort, partly because the initial interventions were inadequate, and also because they upended the most intimate aspects of life – from touching loved ones to the mourning of the dead.

It got worse for Touré. After his ordeal, he decided to return to Forécariah to tend to his father’s land, but on his way, riding on the back of a motorbike taxi, he received a call from a friend who warned him that his wife’s family was plotting to kill him.

As in Congo now, the authorities were deeply distrusted during the West African epidemic, with some believing Ebola was a source of profit for the government and aid agencies. “They said I was negotiating to sell my family, to sell the village,” Touré said of his in-laws. They were accusing him, as a suspicious survivor, of somehow cashing in on his wife’s death. Alarmed, he forced the motorbike to crash and ran away.

Surviving Ebola often means a social death, with some communities fearful that returning individuals may not be fully cured. In a survey in Guinea in 2014, 78 percent of respondents said they would not welcome an Ebola survivor back. Nowadays, this discrimination might not be as severe, but it still endures.

‘Even if I wanted to sleep, I couldn’t’

Shunned by his family, Touré was forced to abandon a promising fishing business. The boat he had bought before the crisis was beached; it slowly filled with silt and the engine rusted away. He ended up working with the Red Cross, helping Ebola patients in a treatment centre, convincing them to take their medicines, and tasting their food first to prove it was safe.

Touré is still traumatised by the events of the last few years. “I started to have depression,” he said. “Even if I wanted to sleep, I couldn’t. So if I didn’t go to a maquis (unlicensed bar) to drink to beyond, then I couldn’t sleep.”

Towards the end of 2015 he attempted to hang himself but was saved by a friend. “I had no desire to live,” he admitted. “If it wasn’t for my two children, nobody could have talked me out of it.” His friend took him to a psychiatric hospital – another social mark against him. “People treated me as if I was crazy,” said Touré. “I had no more voice in my community.”

Aside from the mental toll, there is often also a physical cost for Ebola survivors. Damaged sight, joint pain, and low stamina are common problems. As the virus remains present in semen and vaginal fluid for more than three years, unprotected sex is also a worry.

In Guinea, survivors who still face health problems can enroll in PostEboGui, a clinical research programme that offers free healthcare. That’s where Touré gets his treatment, but he has to travel all the way to the capital, Conakry, for this – and the programme is ending soon.

Touré also relies on a wide but tight-knit network of survivors. “Today, there are no parents,” he said. “So with friends, we hold each other’s hands; we give each other psychosocial support. If there are problems, we call and give each other advice.”

These self-help survivor networks exist in all three of the West African countries affected by Ebola, with representatives at the national level and in most big towns.

Touré can also count on his sister who survived. But she has her own challenges. She is taking care of over a dozen children orphaned by the virus: those of her brother who lost his wife, and of two of her sisters. Under this pressure, “I’m dead with my eyes open,” she said.

During the epidemic, countless organisations implemented programmes to help survivors with income or food support – nearly all of them have since folded.

In Touré’s town a UN agency worked with the survivors’ network to build a chicken farm for all of Forécariah’s “recovered” (guéris, in French), as they call themselves. But the organisation sub-contracted to implement the project allegedly pocketed a chunk of the funds and didn’t supply sufficient feed, so many of the poultry starved to death.

This gets Touré really upset: “On the radio, they say, ‘We have sent a billion to the recovered’ and we don’t get any of that. So now, when you go to someone asking for help, he’ll say ‘Ha, you’ve just benefited from something [money]!’ and will refuse to help.”

One of Touré’s closest friends, Hamidou Sylla, agreed: “When you start to talk about Ebola problems, people flee away from you. …[they say] ‘It’s people who trade in Ebola, who eat money’.”

No escaping the past

Not much money goes to Ebola survivors in West Africa anymore. Some have managed independently to regain their footing. Others are participating in foreign research projects that study them. These projects do not pay a stipend but they do offer a generous transport subsidy and provide free medical care.

Yet stigma persists. “What hurts me the most,” said Sylla, is that “if you call me Hamidou Sylla, nobody will know it’s me. But if you say ‘Sylla Recovered’, or ‘Sylla Ebola’, then everybody knows me.” 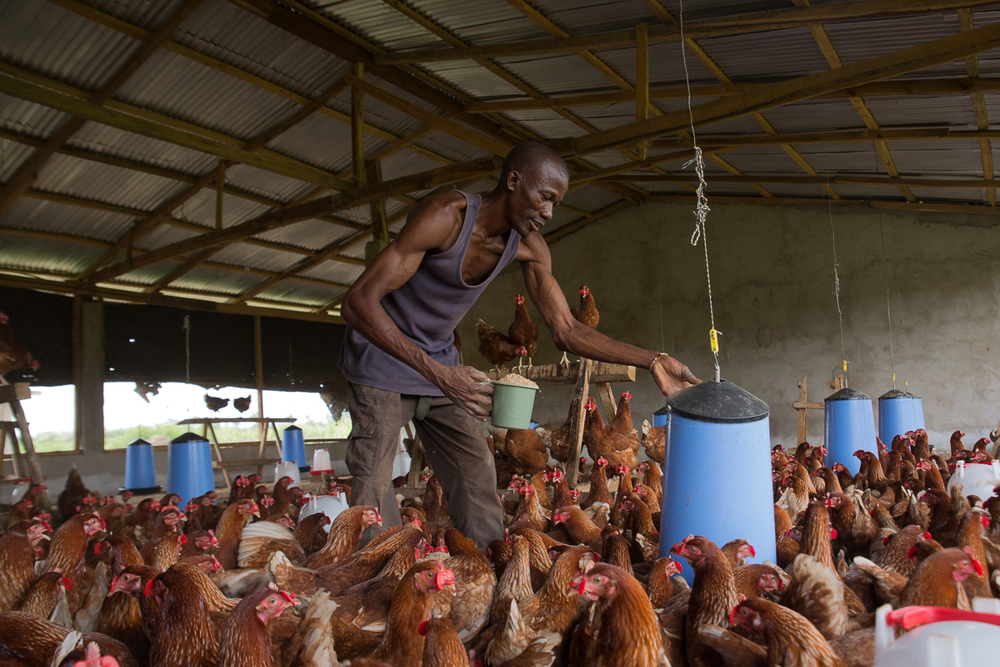 Emmanuel Freudenthal/TNH
“When you start to talk about Ebola problems, people flee away from you." Hamidou Sylla, on his chicken farm.

He works in the Forécariah chicken farm, which benefited from advice from a local poultry farmer and is now doing much better. The chicks congregate around Silla, who, beaming, feeds them grain and changes their water.

Both Sylla and Touré are trying to get on with their lives as best they can. Touré says he can’t work as hard as he used to because he gets tired quickly, but he is spending time at the chicken farm and trying to repair his car so he can work as a taxi driver.

Touré’s relationship with his wife’s family is still tense. For a long time they wouldn’t allow his daughter to live with him and she only moved back in with him recently – which pleases him.

He has remarried, but his first wife is an ever-present memory. “When I die, I’ll meet her there,” he smiled. “Every day I have in my head that it’s today I’ll die.”

(TOP PHOTO: Alsény Touré is trying to fix his car to use as a taxi and turn his life around after surviving Ebola.)