You may have noticed that IRIN has changed its name.

IRIN has been providing field reporting on humanitarian crises for nearly 20 years in a way no other institution does. IRIN News was founded by the United Nations in the wake of the Rwandan genocide, out of the conviction that objective on-the-ground reporting of humanitarian crises could help mitigate or even prevent future atrocities and disasters.

The change of name from IRIN News to The New Humanitarian is a key moment. It is designed to signal our move from UN project to independent newsroom and more clearly communicate our role in covering humanitarian crises and the response to them.

Tackling the world’s crises is no longer the exclusive domain of governments, “Big Aid”, and the UN – nor is it only about disaster relief and aid delivery.

Humanitarianism is evolving in important ways: the private sector’s response to refugees; high school students marching for climate change; local communities reclaiming agency in shaping their own futures. Today, a new generation of humanitarians is redefining the way the world responds to crises – demanding a seat at the table and a voice in the conversation.

We remain the trusted news source for policy-makers and practitioners in humanitarian response, but The New Humanitarian is expanding to reach this wider audience of people who want to better understand our complex world, in order to change it for the better.

Our mission remains the same as it has been since the start: to inform crisis prevention and response by amplifying the voices of those most affected; to shine a light on forgotten crises; and to resist superficial, sensational narratives about the crises of our time.

Looking back at IRIN

IRIN Director Heba Aly, who has worked with IRIN in different capacities since 2007, including as field correspondent and Middle East Editor, discusses our 20-year journey.

“I wanted to look back at IRIN’s work over the years; at some of our most memorable achievements and moments. This is not a formal compilation, more a sketch marking our significant steps; reflecting on some of the stories our team was most fond of; and mapping how  IRIN’s journey to date has influenced and guided our plans for the future.

I’ve heard competing stories about the roots of IRIN – my favourite being an idea scribbled onto a napkin during a night out at a bar (isn’t that how most good ideas start?).

These were the days when Kofi Annan wasn’t yet secretary-general but UN peacekeeping chief, when the UN Office for the Coordination of Humanitarian Affairs – our mother body – didn’t even exist, when our “weekly roundups” were sent out by fax machine. Our annual budget was $500,000 (over the years, it would grow to a peak of $11 million).

IRIN was always something of an experiment, and to give credit where credit is due, whoever thought the UN would house an independent news service? (You might be less surprised that it picked a bureaucratic acronym that stands for Integrated Regional Information Networks as our name).

We began in 1995, using fax and email to distribute our weekly roundups on the Great Lakes region from our headquarters in Nairobi, Kenya. Here’s #11.

One of our first pieces of original content was this briefing on the conflict in South Kivu in the Democratic Republic of Congo. The region would go on to be riven by strife for many years.

Our global expansion began in 1997, when we opened an office in West Africa, to be followed by offices in Southern Africa, Central Asia, the Middle East, and Southeast Asia.

In the late 1990s, IRIN’s was among the first websites to launch in Africa. A classic! 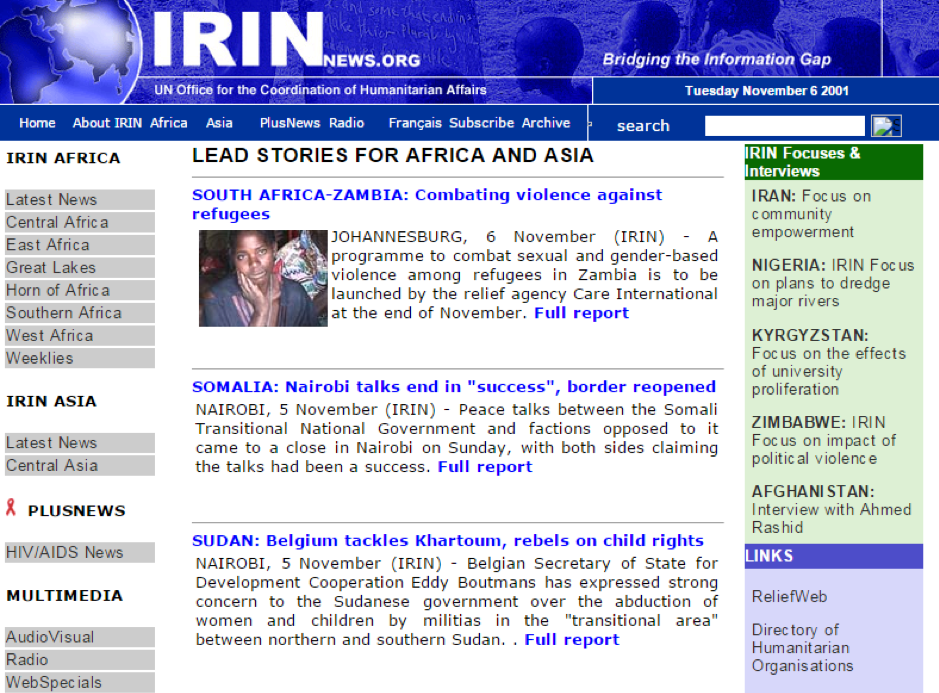 We went on to launch a news service dedicated exclusively to the HIV/AIDS epidemic, PlusNews. One of its documentary series, “Heroes of HIV”, earned IRIN an honourable mention at the 14th annual Webby awards, hailed as the “Internet’s highest honour” by the New York Times. Years later, IRIN’s Obi Anyadike would find himself in the grimy Cipinang district of Jakarta, Indonesia's sprawling capital, speaking to sex workers for a story exploring the challenge of AIDS prevention.

In 2002, we introduced a French translation service, opening our work to readers in West and East Africa as well as elsewhere around the world. Years later, we would do the same in Arabic.

In 2003, as tensions were brewing in Sudan’s Darfur province, IRIN was among the first media organisations to send a journalist into the region – long before ‘genocide’ and ‘Janjaweed’ became household terms in the mainstream news.

In 2004, IRIN created a video team, and one of its first documentaries, “Our bodies… their battleground” – on sexual violence against women in Congo and Liberia – went on to win “Best Feature” at the UN Documentary Film Festival.

Another early film from the unit catalogued the disastrous locust invasions in West Africa, warning of severe food shortages that went on to affect 10 countries across the region.

Another IRIN film, produced in 2006, showed how our reporting could spur concerned citizens into action. “Congo’s Curse” outlined how the country’s riches have spelt its ruin, moving a group of UK-based women to initiate a lobbying campaign with their members of parliament advocating on behalf of the women of the DRC.

Readers were similarly moved by the story of Sally al-Sabahi, a Yemeni girl who was married to an old man at just 10 years old in exchange for a $1,000 dowry. After being drugged and beaten by her husband, Sally escaped. But without the money to pay back the dowry, she couldn’t divorce her husband. Immediately after IRIN’s article was published, offers of financial help poured in from as far away as California, allowing Sally to pay back the dowry and get her divorce.

Over the years, IRIN’s reporting has helped crisis-affected communities connect with their own heritage. In 2006, IRIN stories on Liberia were found in refugee camps in Guinea, where teachers in makeshift schools were using them to teach Liberian refugees about their country’s recent history and progress in peace negotiations.

It has also helped document the violence that leads to displacement in the first place. In 2008, Julius Mwelu’s photos from the heart of the post-election violence in Kenya won the Young Reporter Prize at the prestigious Bayeux Calvados-Normandy Award for war correspondents.

We complemented such breaking news coverage with early reporting on topics that would go on to shape the global news agenda. In 2008, we began highlighting discrimination against the Rohingya people of Myanmar; in 2009, we tracked the rise of Boko Haram; in 2011, we began flagging the movement of refugees to Europe; and in 2013, our film series “The Gathering Storm” began documenting what is today on everyone’s lips: the human face of climate change.

We’re aware our topics, by their very nature, are often depressing, so our coverage hasn’t always been heavy. This 2011 piece on HIV/AIDS began: “Vaginal sex, thigh sex, even armpit sex – people have sex in lots of ways…”. Our 2012 piece “Fifty shades of aid”, on dating among aid workers, was another of our more offbeat hits.

Over the years, IRIN has also flagged the more insidious kinds of ‘crises in the making’ – like new or unacknowledged challenges to health. For example, this 2012 story highlights a study that warns of the long-term switch in mortality from communicable diseases like malaria to non-communicable ones such as cancer, stroke, and heart disease. And who knew that “just under 10 percent (of deaths globally in 2010) were related to injuries, the bulk of them happening on increasingly deadly roads in the world’s poorest places”?

In 2011, when conflict broke out in Syria, the top UN official in the country gave IRIN an exclusive interview, declaring that civil war was on its way.

IRIN’s coverage of Syria over the years would go on to ruffle feathers at the UN, one of several factors leading to our eventual spin-off.

2015 marked a line in the sand for IRIN, as we flew the nest to relaunch as an independent, non-profit media venture. It was a bold, ‘hold your breath’ move for all of us, but one that has paid off, freeing us to look more critically at the aid sector itself. When we broke the news of the resignation of a senior UN human rights official, Anders Kompass, over a peacekeeper sexual abuse scandal in Central African Republic – one of our must reads of 2015 – the potential of IRIN’s newfound independence was clear.

At the end of 2015, we celebrated IRIN’s 20th anniversary. As I wrote in this letter to readers, reflecting on two decades of award-winning reportage, photography, and documentaries from some of the toughest places on Earth – and in the service of the most vulnerable people on Earth – is a humbling experience.

Our new brand, our new name, is not about reinventing ourselves. It’s about building on this rich history, as we drive forward as The New Humanitarian.”

What’s made IRIN special to our readers?

Our journalism should and could reach a much wider audience. We’re often told this by our readers and our peers. That’s why growing our audience and profile is a key plank of our strategy. It’s a big factor in changing our name and rebranding. We must ensure our stories are picked up by many more people working both in and beyond the sphere of humanitarian intervention – citizens who are interested in and concerned by the increasingly interconnected crises occurring around the world.

But we’re aware that our journalism has been and continues to be appreciated – not only by those in positions of power and influence, but also by those who can take action and raise awareness in all manner of ways, including those affected themselves. IRIN is known very well by a small, but influential cohort of people all around the world.

“In any humanitarian emergency, information is key. IRIN... keeps the need for effective humanitarian action high on the political and policy agenda.”

“IRIN scans the globe through a lens that is of unique value for the UN. Your critical voice as an organisation that knows us is of great value.”

“IRIN reports on places no one else is covering. When the Central African Republic blew up in 2013‐2014 and the US embassy was closed, we were starved for information. We counted on IRIN to provide accurate, real‐time reporting. I’ve been a regular reader ever since.”

Charles J. Brown, former Senior Director for Rule of Law and International Humanitarian Policy in the US Department of Defense

“IRIN is an essential source. For humanitarian news or when I’m researching something, it’s my first go‐to source.”

“Keep up all the great work. IRIN has been on a roll lately and I am impressed with the leadership you and your team have taken during the much‐needed upheaval in the sector. Hopefully, these conversations and reporting on it continue to make an impact on how work is done.”

“We are very appreciative of IRIN’s rigorous and in‐depth coverage of underreported humanitarian news. Thank you for ensuring that the crisis in Yemen is not ignored.”

“IRIN provides absolutely essential humanitarian news from places no one else goes.”