Become a member of The New Humanitarian.
Part of an in-depth IRIN series exploring the challenges facing Kurdish people throughout the Middle East as Iraqi Kurds vote on independence
TUZ KHURMATU

As residents on the Sunni Muslim side of Tuz Khurmatu cast their ballots on the question of independence for Iraqi Kurdistan on Monday, dozens of locals gathered opposite, armed with machine guns, RPG launchers, and pistols, preparing to fight against the city’s Shia population.

Half an hour earlier, a minibus carrying Kurdish peshmerga soldiers came under fire from the other side of the small city, almost exclusively populated by Shia Turkmen. The driver – a civilian and ironically a Shia himself – was killed instantly and one of his peshmerga passengers shot in the leg.

Referendum day here was drastically different than in some parts of northern Iraq, where Kurdish nationalism ran high and voting was marked by cheerful optimism and flag-waving.

This troubled city, where a wall divides residents by their adherence to Sunni or Shia Islam, may be the exception rather than the rule on this historic day for Iraqi Kurds, but it hints at the challenges that lie ahead, particularly in border areas claimed by both Kurdistan and Iraq.

It also remains to be seen how Monday’s referendum will impact growing regional and international tensions. The vote was opposed by Iraq’s central government, neighbours of the Kurdistan Regional Government (KRG), including Turkey and Iran, as well as by the United Nations, the United States and Britain. Voting had barely ended before the federal government in Baghdad had urged the international community to boycott crude oil exports from the KRG, and Turkey had declared the vote “null and void”.

Violence had been expected in Tuz Khurmatu in Salah al-Din province, one of the most volatile areas in a fault line of disputed territories.

Frequent clashes between opposing sides have become so dangerous that, for over a year, a wall has separated the two. Residents told IRIN that many locals from both sides fled ahead of Monday’s vote, fearing the bloodshed that inevitably came.

Tuz Khurmatu’s residents – a mixture of Sunni Kurds, Sunni Arabs, and Shia Turkmen – lived in relative harmony for decades. But the emergence of the so-called Islamic State, which at one point held territory just two kilometres from Tuz Khurmatu, enhanced religious divisions.

Fearing the threat of IS, the city’s Shia Turkmen affiliated with Iraq’s predominantly Shia Hashd al-Shaabi forces. Known in English as Popular Mobilisation Units (PMU), these groups welcomed Iraqi volunteers of any faith or ethnicity willing to take on IS. The Kurdish and Arab Sunnis of Tuz Khurmatu, meanwhile, looked to the KRG’s peshmerga fighters for support.

Iraq’s battle against IS enabled the KRG to considerably expand its reach into disputed areas but local journalist Hunar Ahmed told IRIN that when PMU forces arrived in the area to fight IS, they also took control of territory nearby, adding: “Then they never left.”

“There were no such problems here before but, after they destroyed Daesh (IS), the Hashd and the peshmerga started fighting each other,” he said.

Growing violence led the local branch of Jalal Talibani’s Kurdish PUK party, which holds sway here, to authorise the construction of the wall a year ago, separating the town’s Shia Turkmen, who account for around 60 percent of the city’s population, from local Sunni Kurds, Arabs, and Turkmen. 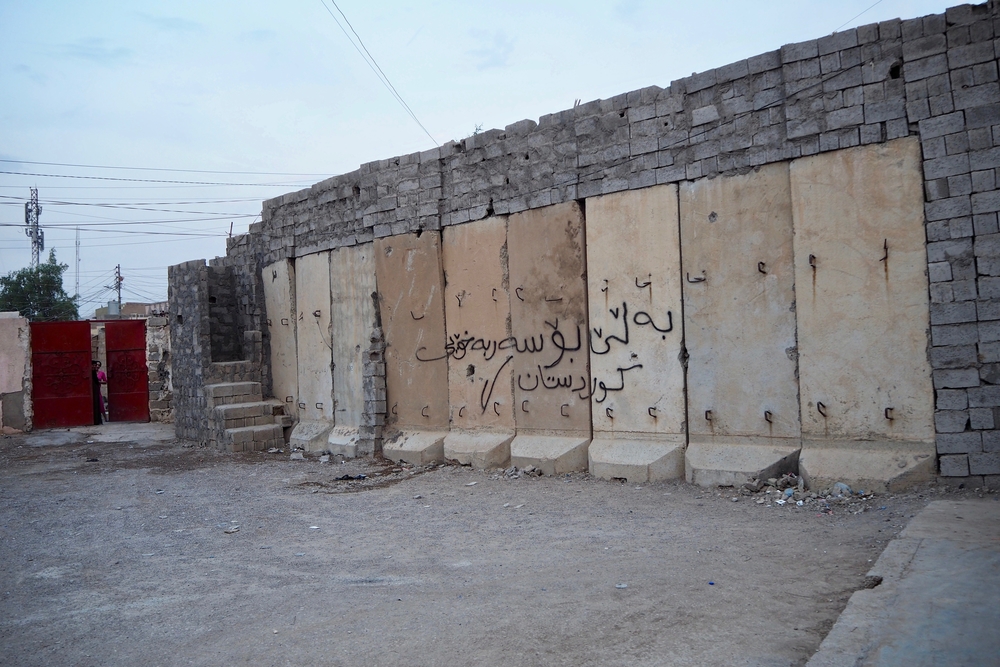 Tom Westcott/IRIN
On the Kurdish side of the Tuz Khurmatu wall, graffiti reads "yes to the referendum" 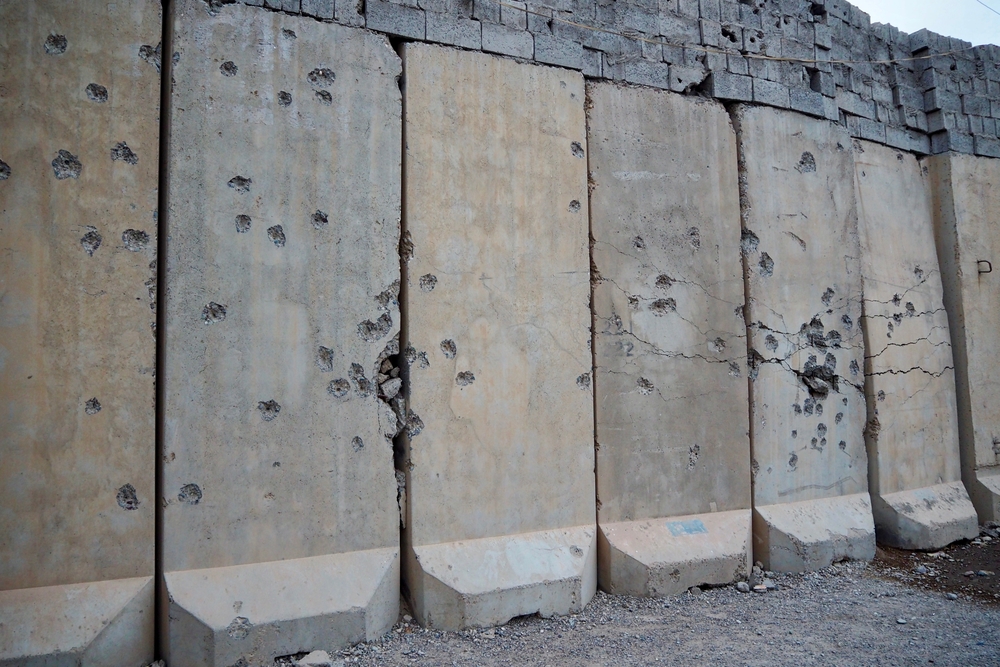 Parts of the city had already been divided since 2010 by barriers erected to reduce attacks by al-Qaeda and other extremist groups, according to Tuz Khurmatu Governor Shalal Abdul, himself a Kurd.

The governor told IRIN that the wall was extended last year as the city became fully segregated – even though elsewhere in Iraq, including just 30 kilometres outside Tuz Khurmatu, the PMU and the peshmerga share front lines and fight IS together.

Abdul attributed the recent escalation in tensions to the referendum but said a change in local PMU leadership had also compromised a long-standing agreement between the two sides. “There is no trust but, despite this, we are working hard to calm things down now,” he said.

“Tell them we will arrest any civilian carrying weapons,” he barked down the phone late Monday afternoon, issuing orders for the armed Kurdish civilians to stand down to prevent the day ending in a major gunfight.

His clothes and hands smeared with blood, passenger Rami Abass told IRIN how the driver of the ill-fated minibus had stopped for tea from a temporary refreshment stall, erected as part Shia observances of the holy month of Muharram and in preparation for the religious pilgrimage of Arbaeen.

“Our military bags were piled on top of the bus, and when the Hashd saw those they knew we were peshmerga and opened fire with machine guns,” he explained.

The birthday of the dead man, named as Wahaj Fuad, was Tuesday. He would have been 30. The peshmerga on the bus had been heading for their hometown of Khanaqin to cast their ballots when shots rang out, Abass said.

Just an hour before the shooting, local Kurds had boasted to IRIN that a several-hundred strong force of armed Sunni locals had patrolled the sreets the night before the election. “The Shia did nothing because they are very scared of us,” one said proudly.

After the shooting, it was the city’s Kurds who were looking nervous. 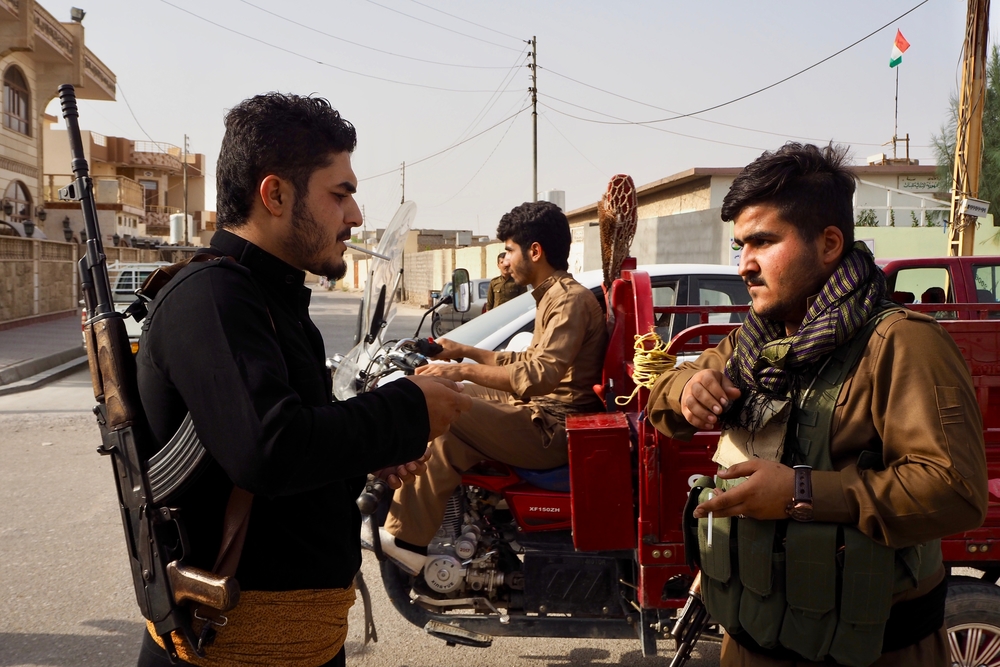 “We’re making preparations because we are afraid the Iranian army will attack us,” one Kurdish civilian fighter told IRIN near a polling station, referring to the Iranian-backed PMU. He alleged that another peshmerga had been shot and critically injured by a sniper as he went to vote.

As more armed civilians arrived on motorbikes or piled into the back of battered 4x4s, and unloaded mortar rounds in the street, an explosion shook the ground.

“A mortar,” the man said quietly. “The Hashd offensive against the peshmerga has begun.”

Trouble had been brewing in Tuz Kharmatu long before referendum day.

A week before the vote, as Kurdish anthems, songs, and speeches from a rally in support of the referendum echoed out across the city, IRIN crossed one of the walls and found local Turkmen fighters and peshmerga units in a tense and silent stand-off, holding rival positions just 200 metres from one another.

“Our orders are to be ready at all times to fight,” said peshmerga soldier Dolan. There hasn’t been a serious battle for half a year, “but we are always ready. As soon as we hear an explosion or a gunshot, we will start fighting.”

Less than 200 metres away, a large Shia flag was pinned to a wall, with another flying on top of a makeshift tower beneath which three young men kept a constant watch over the streets. Within one minute, armed Turkmen appeared on street corners, some wearing balaclavas.

While the conflict here predates the independence referendum, Turkmen living in Kurdistan were the largest ethnic minority demographic to take a public stance against the vote. Eight Turkmen political parties made a joint announcement pledging allegiance to Baghdad and calling on all Turkmen in the region to boycott the ballot.

Iran and leaders of the PMU also came out against the vote.

Voters, unperturbed by the fighting, still dribbled into the polling station in the city centre, past the growing group of men and guns, amongst whom a little girl wearing a dress made from Kurdish flags cycled cheerfully.

Volunteer Kharwan Khabat, responsible for welcoming voters and explaining procedure, told IRIN that more than half of the 4,000 registered at that spot had cast their ballots: “People haven’t been too afraid of violence to vote and, so far, things have been very good here.”

While the armed men dispersed after receiving orders from the governor – who was frantically negotiating a temporary peace settlement -- voting stations closed their doors and started emptying the ballot boxes.

“There are two ‘no’ votes here. Look!” said one of the election volunteers, holding up the two papers. “And I know exactly who cast those two votes.” Another ballot paper, where the voter had crossed both the yes and no boxes, would be declared void, she explained.

At a voting centre in the city’s predominantly Arab and Turkmen Sunni district where votes were being counted, lawyer and election observer Juma Hussein said 5,000 of the 6,500 people registered had voted. All those registered at that polling station, he said, were displaced from their villages by IS and have still been unable to return to their destroyed villages, which are now in PMU-controlled territory. Of those, 3,000 were Sunni Arabs and Turkmen, and 2,000 were Kurds. 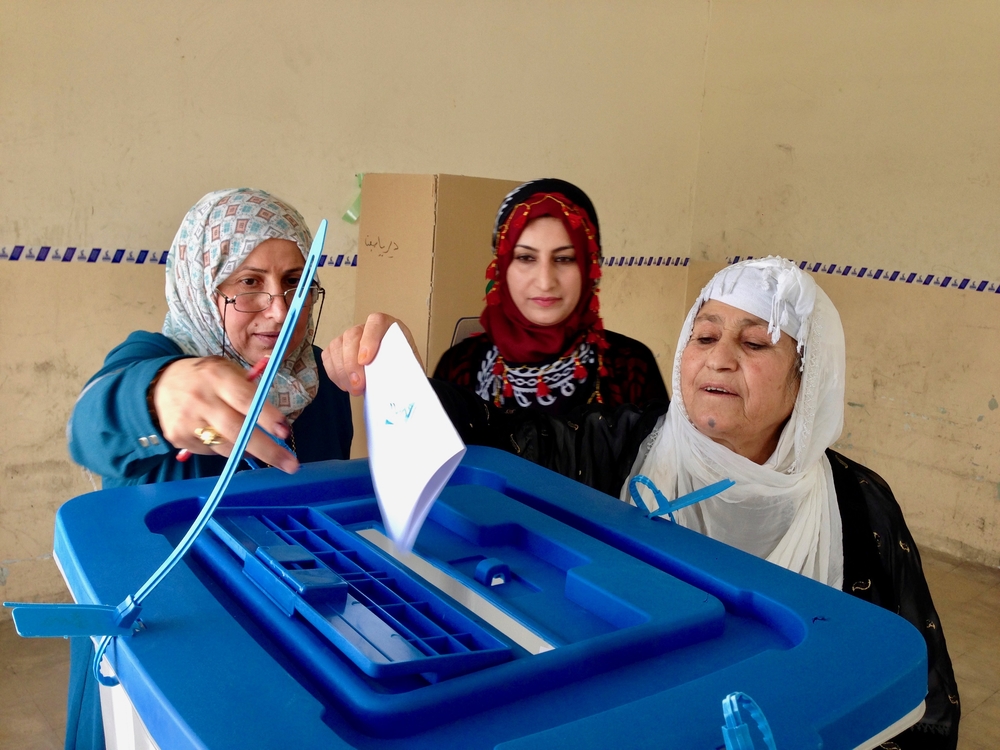 Across the KRG and other disputed territories, turnout was said to be as high as 72 percent.

Some of these displaced Arabs live unhappily sandwiched between the city's indigenous (and occasionally warring) Sunni and Shia residents.

“We have no problem with Kurdish people or Turkmen,” said 45 year-old Mariam desperately, gesturing towards the wall, under the shadow of which she has lived with her six children for three years. “We just don’t want any more bloodletting or war. We have had too much fighting and we hate war. We just want a balanced and peaceful life.”

If an independent Kurdish state is to emerge after the referendum, it is in ethnically mixed and politically divided areas like Tuz Khurmatu, with a history of sectarian conflict, where the future looks most uncertain.