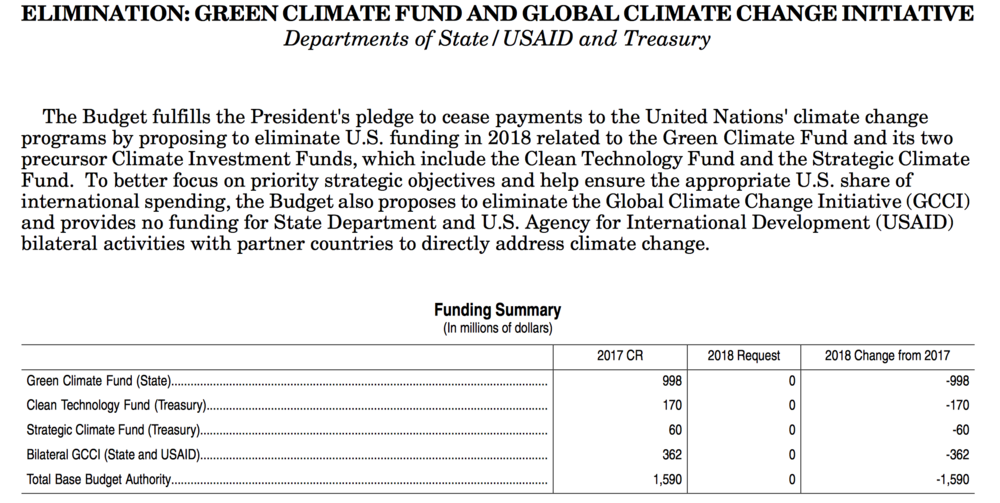 White House
An excerpt of the White House's 2018 budget proposal shows some of US President Donald Trump's intended cuts to climate change programs
Finance for climate change aid and preparedness is also on the chopping board, with the proposed elimination of the Green Climate Fund contribution and the Global Climate Change Initiative. The initiative, a partnership between the State Department and the US Agency for International Development, would be gutted as part of Trump's campaign pledge to put "America first". Total investments in climate change action targeted for elimination amount to $1.59 billion.
Through its climate action programme, USAID addresses climate extremes, such as droughts and floods, as well as ocean acidification, sea-level rise, and other slow onset changes that affect people’s lives.
Should Congress approve a budget that undermines science, said Cleetus, "this would have a major impact on the work that USAID and the State Department are doing in the developing world, from providing capacity-building to technology transfer and more."
She highlighted the importance of incorporating adaptation action plans into development programmes in countries already suffering the consequences of climate change.
"If you see what's unfolding in Africa right now in terms of drought and food shortages, you can see how all these things are interconnected,” she said. “I think it's a big mistake for the Trump administration to think that they can separate climate out and all the other work on health and development can proceed unimpeded."
ldb/jf/ag
(TOP PHOTO: US President Donald Trump at a campaign rally in 2015. CREDIT: Michael Vadon/Flickr)
Partager cet article
Participez à la discussion