In the middle of a vast expanse of grey scrubland a rapidly growing population of more than 120 families huddle under parched trees. Escaping the latest wave of conflict on Yemen’s Red Sea coast, they walked two days to get to this camp southwest of Taiz city.

But on arrival, the scores of women and children found nothing. No support from aid agencies. No food. No water. No shelter. The elderly talk of eating the trees to survive, while children beg for water from local farmers. A mother cradles her clearly malnourished baby in her arms.

A gathering by a tree at IDP settlement in Yemen.jpg 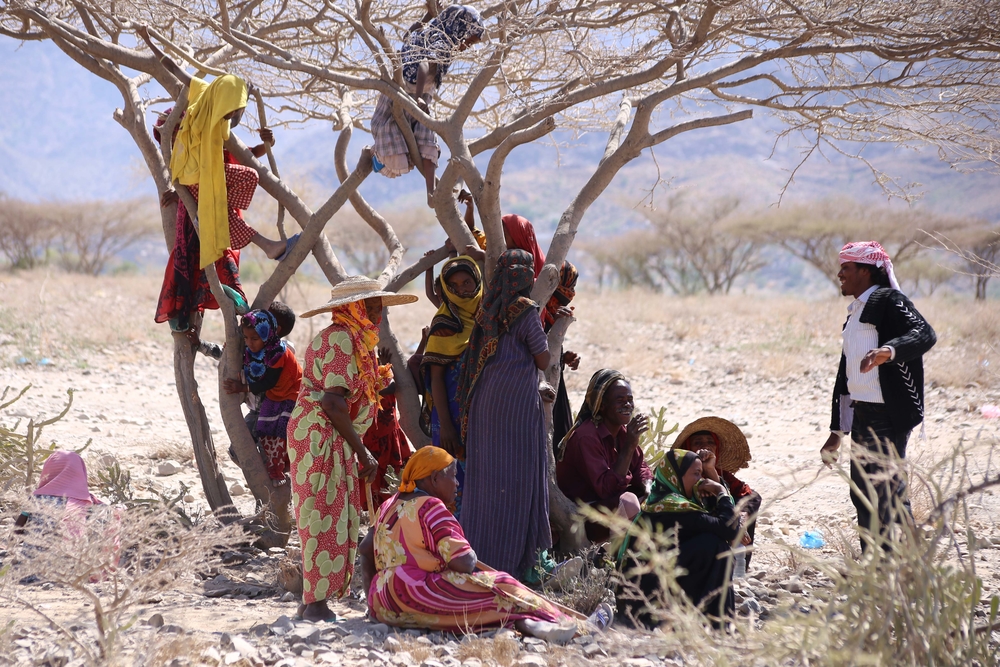 Al-Dashin camp is the outcome of two years of war in Yemen. It has grown and shifted, adding to more than three million already displaced in the country, with the tens of thousands fleeing new military operations that began January in the west of Taiz governorate between the main belligerents: the northern Houthi rebels along with army units loyal to former president, Ali Abdullah Saleh on one side and so-called resistance forces, supported by the Saudi Arabia-led coalition on the other .

Yemen’s humanitarian crisis is deepening, and the consequences of this war are felt largely in rural areas, where the majority of the population lives, far from the urban hubs where hospitals and medical centres still operate. This is where the ‘silent deaths’ of Yemen’s war are happening, unobserved and undocumented.

Many adults in al-Dashin go days without eating, giving priority to their children.

Hassan Ali al-Thomb and his wife are battling to keep their malnourished baby, Saeeda, alive, along with three other children. One-year-old Saeeda is sick. Her under-fed mother, Fadilah, is struggling to produce breast milk to regularly nourish her baby. Without food supplies or baby milk supplements, Fadilah is distressed and exhausted.

A mother and her children displaced in Yemen.jpg 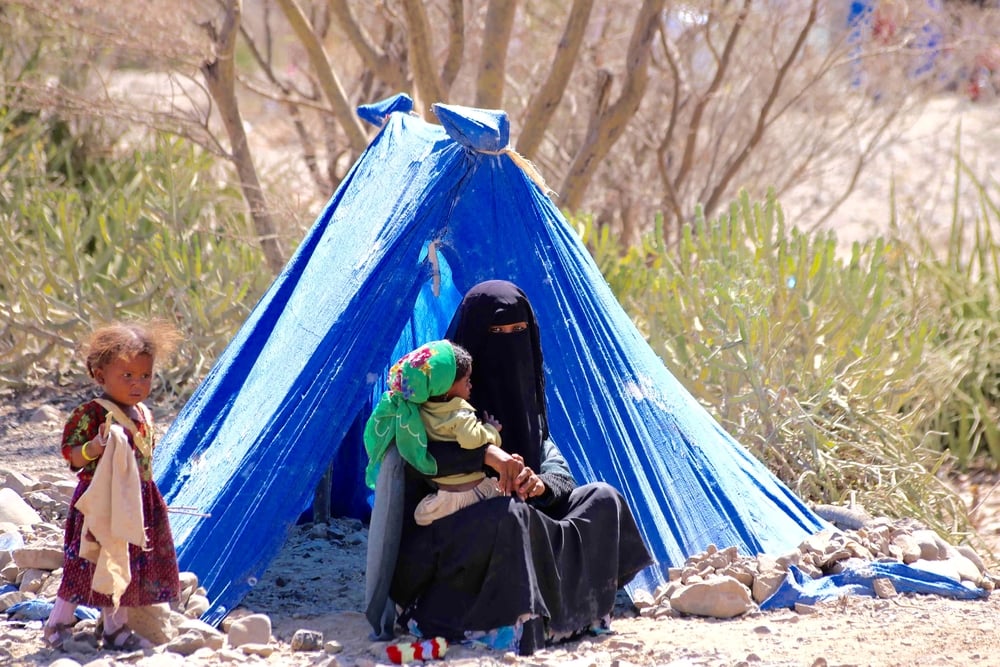 Two elderly adults, believed to be in their 80s, and three children suffering from malnutrition have died since IRIN visited the displaced families at al-Dashin. A five-year-old girl and an eight-month-old baby boy died from hypothermia while seriously malnourished. Without medical care available and in need of kidney dialysis treatment 50 year-old father of five, Mohammad Sultan, passed away as a result of renal failure. The latest death was three-year-old Mohammed Adel, who died on 25 February, also from malnutrition.

“We need food. We all need food,” Hassan said. “We don’t have money or even a mattress,” he continued, pointing to the current home of the family of five – a sand patch of less than two square metres underneath a strip of tarpaulin.

The only shelter for the new arrivals are sheets of plastic, donated by nearby villagers, strapped between trees. At night, the women and children lie cheek by jowl on the bare ground under the makeshift tents. The men are left to clear rocks from the sand to sleep out in the open.

Seven-year-old Wagee fled with his family from the village of Hameer. He no longer goes to school. Instead, he spends his days going door to door in the surrounding villages, begging for food and water. “I miss my village and it’s freezing here at night without blankets,” he told IRIN.

There is no official log for the numbers displaced from more than a dozen rural villages whose residents found their way to al-Dashin. The most recent figures from the UN High Commissioner for Refugees (UNHCR), produced since last month’s onset of fresh violence in western Taiz, put the number of displaced within the governorate at more than 28,000 people.

Although the percentage of Yemenis living in rural areas has fallen over the past 20 years, more than 65 percent of the population, over 17.5 million people, still live outside the urban centres. It is those living in the most isolated and inaccessible parts of the country that are now the most vulnerable.

Al-Dashin camp was first established just over a year ago to cope with up to 14 displaced families. Marwan Sauhaya, who works for the aid agency CARE International, was responsible for providing water and food support for some 80 people.

But when violence suddenly escalated last month, more rural villages became caught between the warring sides and numbers here swelled dramatically. With no provisions for the growing number of new arrivals, Sauhaya and his colleague Rasmi al-Hamoudi are at loss at how to deal with the new intake.

“Life was difficult before the war,” said Sauhaya. “But the war came and killed any life we had before.”

IDP shelters with mountains behind in Yemen.jpg 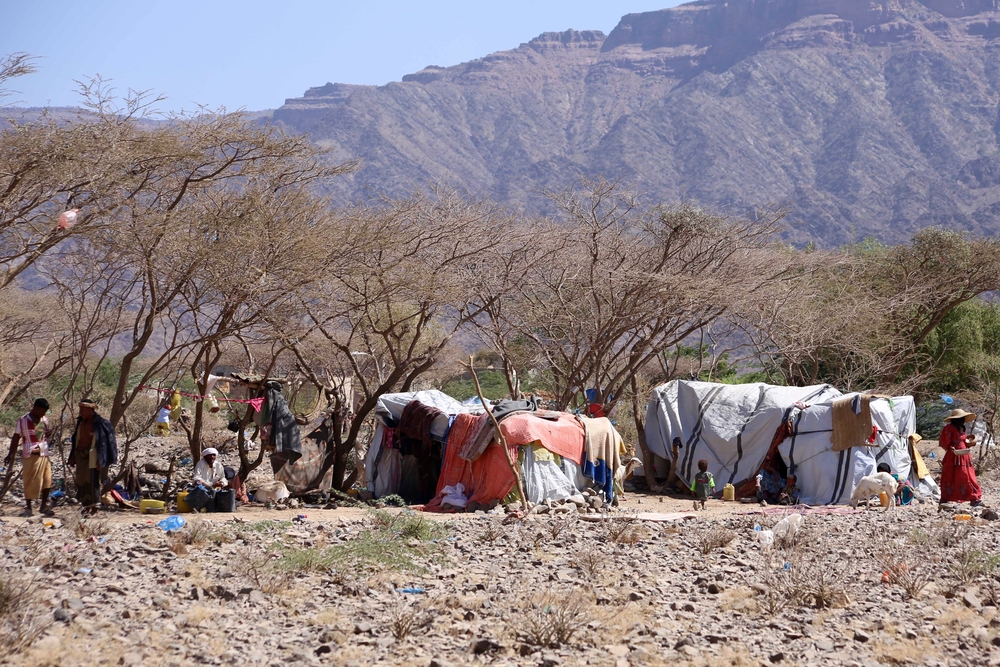 On the day IRIN visited al-Dashin, a woman, Mudiha Mohammed, wandered into the camp looking for a safe place with shelter after walking two days to get there.

Her family along with three others, some 20 people in total, were walking behind her. She described how they fled their village of al-Heniya in the middle of the night when the shelling began – some of her relatives were killed and the children were terrified. Mudiha arrived with nothing more than the now-torn clothes she was wearing when she ran from her house.

Leaving al-Dashin, a large cloud of dust approached from the distance. Driving erratically at break-neck speed to make it more difficult for enemy rocket fire to hit them, a pick-up truck filled with fighters was on its way to the front line somewhere in the hills ahead.

Behind it came an SUV packed with locally donated, second-hand blankets. A scrum started as men, women and children scrambled to get their hands on a coveted source of warmth for the cold winter nights.

In recent days, the makeshift camp of displaced families, 70 percent of whom are children, were forced to move on once again. With the front line of fighting shifting, the mass of homeless civilians grew as the villages surrounding al-Dashin also emptied and residents joined the journey a further five kilometres east to the village of al-Ofira.

Still without support from aid agencies, most survive by begging in neighbouring villages and from passing cars on the nearest asphalt road.

Sauhaya and al-Hamoudi are themselves now displaced, along with those they are attempting to care for. The local school has been turned into accommodation for the displaced families.

Yemenis are renowned for their unwavering resilience. This is a rural-based society, well practised at caring for its own after decades in which there has been a near-total absence of a functioning state. But there has to be a breaking point. In a remote dusty wasteland in rural Taiz, that point of collapse is startlingly tangible. 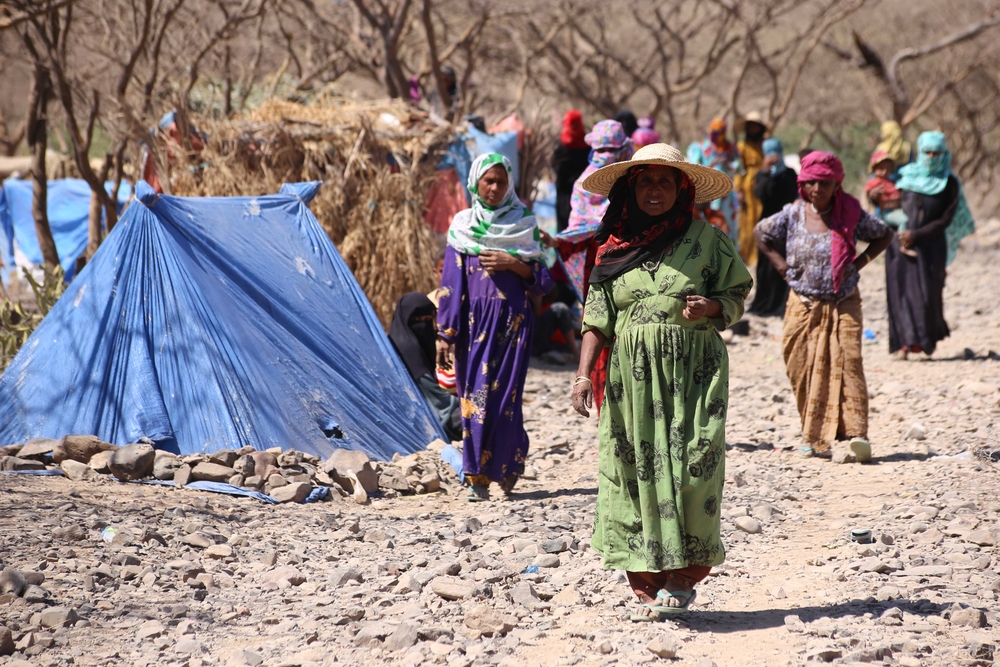 This article was supported by the Pulitzer Center on Crisis Reporting