Iraq already had shortages of psychiatrists and psychologists before the rise of so-called Islamic State. Now, as hundreds of thousands of civilians emerge from years of IS rule, the impact of those shortfalls is becoming painfully clear.

Many of those needing help are children, like Emir Ibrahim. The 14-year-old was lined up against a wall, gunshots scattered around his head. And this was just the beginning of his punishment.

The teenager, who had been accused of attempting to escape his northern hometown of Hawija, recalled what happened after he was brought before an IS judge. He “had a metal pole and started beating me with it... my back was covered in blood. Then, they put me in prison,” he said.

Released thanks to a payoff from his father, Ibrahim and his family fled to Debaga Camp in Iraqi Kurdistan, a northern swathe of Iraq run semi-autonomously by the Kurdish Regional Government (KRG).

Even when they were safely set up in the camp, Ibrahim was still afraid to go outside. In the end, the boy’s mother, Aya, sought out mental health support.

“Everyone has problems like this,” Aya told IRIN. “I went because my neighbour said they helped cure her son, so I went to ask for help.”

Almost 150,000 civilians have already fled Mosul as the effort to oust IS from its largest Iraqi stronghold intensifies. With as many as a million people still inside amid an increasingly bitter siege, more families like the Ibrahims will likely seek professional help in coming months.

Elektra Noutsou, until recently mental health activity manager for Médecins Sans Frontières‎ Switzerland in Baghdad, told IRIN that despite plenty of warzone experience as a psychologist, she was shocked by both the level of need and the forthrightness of patients in Iraq. 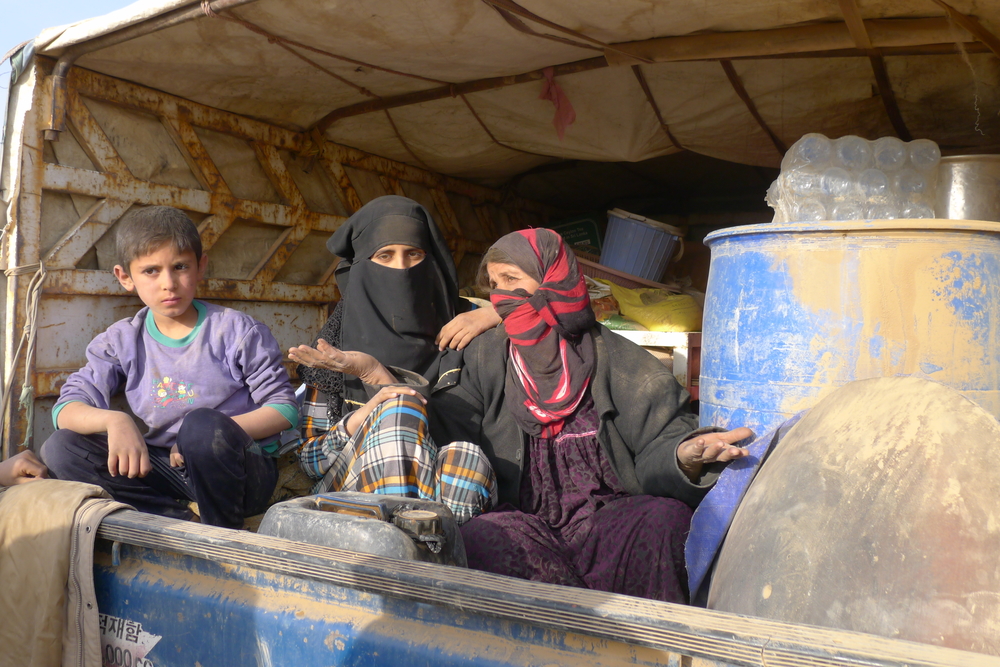 Tom Westcott/IRIN
Nearly 150,000 people have been displaced by the battle for Mosul

Noutsou described patients knocking on the window of her car in Tikrit, where many people arrived from areas near Mosul. She assumed they were seeking a general physician for some kind of physical injury or illness. “They said: ‘No I just want to talk to you… and also my neighbour would like to see you too.’

“At first, I was overwhelmed,” Noutsou recalled. “I didn’t know which person to help first because so many people were coming up to me.”

MSF is the only aid group with specialist teams dealing with severe mental health cases for those displaced from Mosul.

Bilal Budair, MSF mental health manager in Erbil – the de facto capital of Iraqi Kurdistan – said his teams had even stopped doing outreach activities in Debaga because so many camp residents were knocking on their doors (although they do similar work elsewhere).

“People are suffering, and their suffering has led them to go to our services,” he said. “We receive many patients on a daily basis.”

It's easy to focus only on the big battles, but Iraqis throughout the country are in need of assistance.

This is laid bare in Abu Ghraib, a Baghdad suburb best known outside the country for hosting an infamous American prison.

MSF has a small clinic there made up of several caravans.

When IRIN visited at the end of October, mental health support had only been on offer for a month. Doctor Duniyah Akbar, one of the clinic’s GPs, had been pressing for it almost since she started a year earlier. 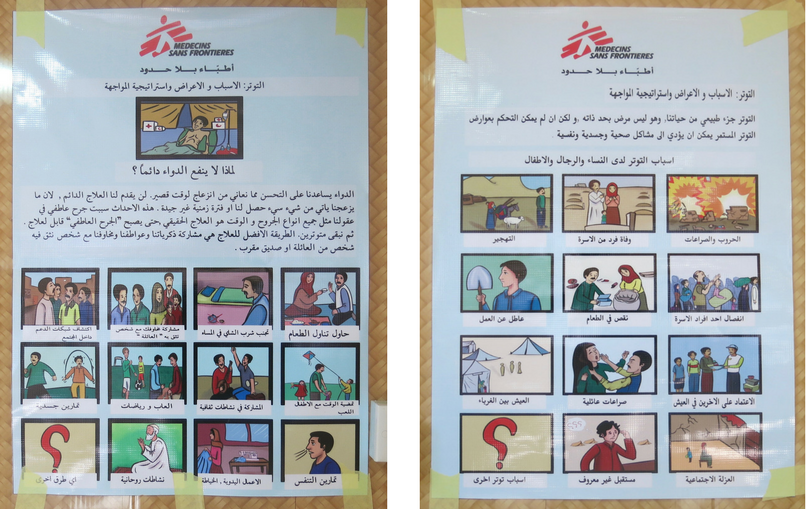 The reasons for such high general needs are manifold, she explained, in between appointments – her patients seated in an outdoor waiting area. “With displacement and low socio-economic status, here in Abu Ghraib you find a lot of cases of depression, stress, and… a lot of cases of Post-Traumatic Stress Disorder, especially in people who… fled military operations against [IS].”

Doctor Akbar said that while a few of her patients were concerned how their families might view treatment, most were just keen to get better. In fact, she thought patients with epilepsy suffered greater stigma than those with psychological or psychiatric diagnoses.

All her patients were being screened for mental health issues, and plenty had referred themselves to a nearby caravan – decorated with posters about the causes and symptoms of anxiety – where two women were waiting to see a psychologist.

In addition to MSF's teams and those connected with other aid agencies, there are only around 80 clinical psychologists working in Iraq and Iraqi Kurdistan, up from 47 in 2010, according to official figures. There are more psychiatrists – some trained in techniques like Cognitive Behavioral Therapy – but they are overworked too.

Doctor Ahmed al-Rudaini, an Iraqi health ministry spokesman, agreed that mental health care was “very important these days”, but it was clearly not his government’s main priority.

“We are focusing on saving people’s lives and providing surgeries and first aid treatment in the areas of operations [against IS], rather than focusing on psychological issues,” he said.

The government has plans to “train and encourage and educate people about the importance of such fields,” but this, al-Rudaini added, “needs time”.

Some aid agencies, including the UN’s refugee agency, UNHCR, are trying to fill at least some of the gap by training aid workers in what’s called “psychological first aid”.

“Staff are trained to carefully listen to families, allow individuals to discuss what they have gone through and identify their needs, followed by immediate referrals to service providers,” a UNHCR spokesperson explained in an email. Psychological first aid isn't meant to replace treatment, but can be a useful tool in the aftermath of a traumatic event.

MSF is also training new staffers in these techniques. But not everyone is good at listening and talking, Noutsou pointed out, highlighting the need to find the right people.

It was easy to see why Rasha was one of those MSF had selected to train up in psychological first aid. At the Abu Ghraib clinic, IRIN found her administering questionnaires to patients and helping them schedule appointments.

The 29-year-old was easy to talk to and had the sensitivity to move even a whispered conversation about patients outside the quiet waiting room. In only three weeks at the clinic, she had already heard plenty of stories she wanted to forget.

“Most of the people who come here have attempted suicide already,” Rasha told IRIN, mentioning a young woman who set herself on fire because of ongoing family problems.

Many patients want to talk about divorce, stress, and depression, she said. “Some people are shy, and others love to talk and come here just to seek help from our psychologists.”

A unique positive to take from the situation is that the stigma surrounding mental illness in Iraq appears greatly diminished.

MSF’s Noutsou believes it is partly the scale of the trauma that Iraqis have been subjected to over the past two years, since IS entered the country in January 2014, that has broken the seal of shame.

"'We’ve been through wars… we know war,’ she recalled patients telling her. ‘This is unprecedented. This, we have never experienced this before.’”

Hussein Shaati, a psychologist at Abu Ghraib, told IRIN that mass displacement – currently hovering at around three million – also played a role, in that a lack of local and/or family support systems meant many were now forced to overcome any stigma they might previously have felt.

“They were supported,” he said. “But after trauma [and displacement]… they have to go and seek help.”

This idea was echoed by Rasha, who said several patients had told her that any care they once had had gone. 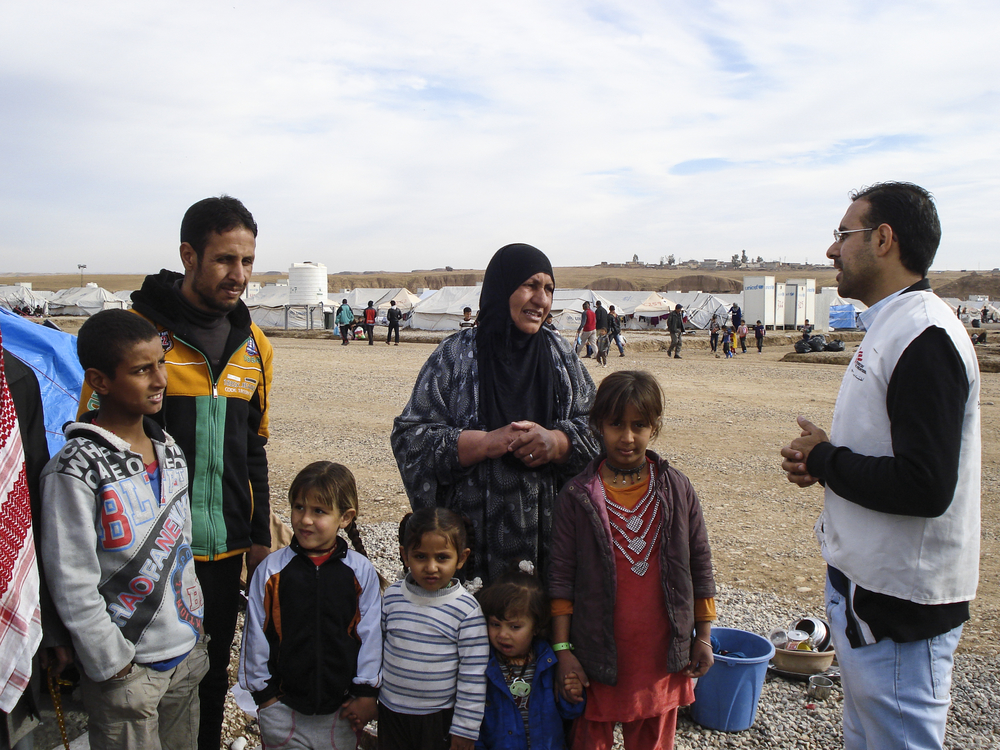 But therapy doesn’t necessarily bring the immediate relief of a pill. And doctors told IRIN that convincing patients in Iraq to keep coming back for repeated appointments was still a major hurdle.

It’s not just that, MSF’s Budair’s pointed out. “You are treating patients at the same time war is still going on… [One of the main] challenges to our activities is treating patients while the war is running. Many are worried about their family in Syria or in Mosul, and this creates a lot of anxiety. We have patients with multiple diagnoses.”

In a recent statement, MSF said that as the battle for Mosul drags on, the severity of the events patients describe increases.

And while witnessing public beheadings certainly causes trauma, that isn’t the right term for everything MSF is dealing with.

Both Noutsou and Budair told IRIN they see many people with pre-existing conditions that have gone untreated for the past two years: depression, bipolar disorder, anxiety, marriage issues.

Budair was frank about the future, adding simply: “We are expecting to see more patients.”

(TOP PHOTO: Rasmiyya, 65, wipes a tear from her eye as she recalls the story of losing her leg, as she sits in her tent in a camp for internally displaced Iraqis in Dhuha al-Rawii in Baghdad’s western Mansour district on July 22, 2015. Ed Ou/UNHCR)