Those who thought Europe’s refugee “crisis” was over were reminded this week that tens of thousands of refugees remain stranded in Greece and the Balkans. Images of refugee tents shrouded in snow on the Greek islands have sparked outrage about the lack of adequate shelter, and scorn has been poured on the Greek government for keeping refugees in such miserable conditions. But others have pointed out that the real culprits are EU and member state policies that have closed borders and shrugged off responsibility for a more equitable distribution of the refugees arriving on Europe’s southern shores.

Italy and Germany, along with Greece, have paid the heaviest price for the EU’s lack of solidarity. Germany has received nearly 1.2 million asylum seekers over the past two years, while Italy received 335,000 arrivals over the course of 2015 and 2016. Under increasing pressure from their electorates and with little chance of EU-wide agreement, both countries are pushing ahead with unilateral measures aimed at stemming the flow of migrants and refugees, and more rapidly returning failed asylum seekers.

Taken in isolation such measures are unlikely to have a major impact, but in late 2015 and early 2016 we saw how the actions of one or two member states can have a knock-on effect on migration policies throughout the EU.

Sea arrivals to Italy reached a new high of 181,000 in 2016 and the pressure on the country’s reception system is immense. Italy’s new government, led by Prime Minister Paolo Gentiloni, who took office mid-December, is wasting no time acting to deter the steady stream of smugglers’ boats setting off from Libya’s coast, even in the middle of winter.

This week, new Interior Minister Marco Minniti was dispatched to Tripoli to broker an agreement on fighting irregular migration through the country with Fayez al-Sarraj, head of the UN-backed Government of National Accord. The GNA is one of three governments in Libya vying for power but Italy appears unwilling to wait for the emergence of a central government with which to negotiate. This week it also re-opened its embassy in Tripoli, the first Western country to do so in the two years, since conflict erupted between Libya’s rival factions.

According to news reports, Minniti and al-Sarraj agreed to strengthen cooperation on fighting terrorism, irregular migration, and human trafficking. A statement issued by the interior ministry noted that the embassy would serve as “the principal coordination centre” for the joint efforts.

The bilateral agreement, due to be formalised in Rome at the end of January, is not unprecedented. Under a “friendship” treaty that former Italian prime minister Silvio Berlusconi made with the late Libyan leader Muammar Gaddafi in 2008, Italian ships intercepted boats carrying migrants and returned them to Libya, where those on board faced detention and deportation. As Human Rights Watch pointed out, there was no attempt to determine whether any of the migrants qualified for international protection or were victims of trafficking. In 2012, the European Court of Human Rights ruled that Italy had violated international laws with its “push back” policy.

While it seems unlikely Italy will renew that strategy, it’s still unclear what form its cooperation with Libya will take, besides supplying Libya’s coastguard with eight new patrol boats. Reportedly, one of the goals will be to boost controls at Libya’s southern border, where most migrants currently enter the country in smugglers’ vehicles originating mainly from Niger. But the GNA has limited authority in the south, where regional tribes control the main smuggling routes. 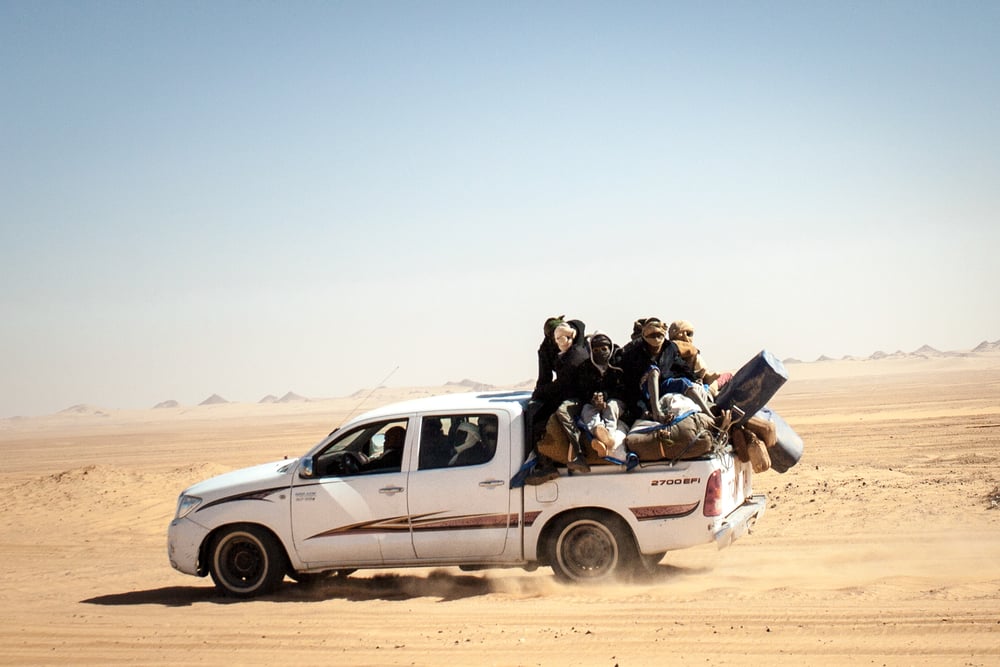 The deal may nevertheless set a precedent for other member states to strike similar agreements, or for the EU to consider a migration arrangement like the one it made last year with Turkey. Malta, which is currently holding the EU presidency, has already suggested that the EU could expand on the agreement Italy has forged with Libya.

Ramped up detentions and deportations

The second prong of the Italian government’s hardened approach to irregular migration is to increase the rate at which it deports migrants rejected for asylum. Before heading to Tripoli, Minniti was in Tunis to discuss a repatriation agreement that could smooth the way for Italy to more easily deport Tunisian migrants, most of whom don’t qualify for asylum. Anis Amri, who committed the attack on a Berlin Christmas market in December, had arrived in Italy from Tunisia in 2011. Both Italy, and later Germany, attempted to deport him, but Tunisia failed to issue the necessary travel documents.

A week after Amri was shot dead by police near Milan, Italy’s police chief issued a directive urging officers to take “extraordinary action” to help deport more irregular migrants, “in an international context characterised by instability and threats”. Later, Minniti announced plans to open detention centres in every Italian region where migrants would be held prior to their forced return. Former prime minister Matteo Renzi, who stepped down in December, had given in to EU pressure to build “hotspots” to screen and fingerprint migrants, but had stopped short of detaining them.

In the wake of the Berlin attack, Germany is also under pressure to increase the rate at which it returns failed asylum seekers. It deported 25,000 of them in 2016 (up from 21,000 in 2015), and another 55,000 returned home voluntarily, but the figure is not enough to satisfy a public fearful of more extremist attacks and struggling to absorb hundreds of thousands of newly recognised refugees.

German Interior Minister Thomas de Maizière is pushing a plan that would make it easier to detain rejected asylum seekers considered a potential security threat, and to deport them from “repatriation centres” at airports. Starting in March, Germany also plans to restart returns of newly arrived asylum seekers to Greece, reversing the five-year EU-wide suspension of the Dublin Regulation, which requires asylum seekers to remain in the first country where they register a claim. This couldn't come at a worse time for Greece, which is already struggling to process the asylum claims of an estimated 62,000 refugees stranded by border closures in the Balkans and the EU-Turkey agreement.

Germany has threatened to cut foreign aid to countries that don’t cooperate in accepting back deportees. There’s also renewed talk of adding Tunisia, Algeria, and Morocco to Germany’s list of “safe” countries of origin. Rejected asylum applicants from “safe” countries can be fast-tracked for return, although repatriation agreements are usually necessary to actually carry out deportations.

Despite the rhetoric from Italy and Germany, the reality is that deportations are hard to do. In a year in which German Chancellor Angela Merkel’s government will be fighting for re-election and in which early elections in Italy are also a strong possibility, the first priority for both countries is to slow the rate of new arrivals.

Last year, Austria introduced a cap on the annual number of asylum seekers it would accept, a move widely criticised at the time as a contravention of international refugee law. But Austrian Defence Minister Hans Peter Doskozil is now proposing a system that would see caps imposed across the EU, in conjunction with the offshore processing of asylum applications in countries such as Niger and Jordan.

In the past, Merkel has dismissed the idea of setting an upper limit on asylum claims, despite pressure to do so from the Christian Social Unity (CSU) party, which forms part of her coalition government. But now Merkel’s own Christian Democrat (CDU) party is proposing annual targets for numbers of asylum seekers based on the humanitarian situation in conflict zones around the world, and on Germany’s ability to absorb newcomers. The proposal stops short of setting a figure for 2017, but it suggests that Germany may now be more receptive to the Austrian plan, which will be presented at a meeting of Central European nations in February.

2016 saw border closures and the EU-Turkey deal make it a lot harder to get into Europe, but 2017 promises to be a year in which the doors close even further on those seeking refuge and asylum.