After nearly 20 years as part of the United Nations Office for the Coordination of Humanitarian Affairs (OCHA), IRIN spun-off to become an independent media organisation in January 2015. In 2016, IRIN was reborn as a Swiss association, with its Geneva headquarters now running global operations.

"This opening of our doors in Geneva is the culmination of two years of hard work towards full independence,” said IRIN’s Director Heba Aly. “It is an incredibly important moment for us, and we thank everyone who was a part of it.”

With its network of journalists in 70 crisis zones around the world, IRIN is a key source for original on-the-ground reporting and expert analysis of humanitarian crises and the trends that shape them. Its award-­winning frontline journalism covers parts of the world often under-reported, misunderstood or ignored. With a core audience of aid workers, government officials, analysts and UN decision-makers, IRIN drives more effective and accountable humanitarian action. Its work is syndicated, republished and cited by news outlets and journals from around the world.

The event will gather ambassadors, UN and NGO representatives, IRIN’s newly established Board of Directors, and its journalists for a discussion of the role of the media in an era of unprecedented crises. Ambassador Valentin Zellweger, the Permanent Representative of Switzerland to the United Nations in Geneva; Olivier Coutau, the Delegate to International Geneva; and Yves Daccord, Director-General of the International Committee of the Red Cross (ICRC), will be among the speakers at the event (see full programme below).

“IRIN’s arrival in Geneva is very good news for this city and for the extensive humanitarian community based here,” said Ambassador Zellweger. “It will strengthen the local media scene and introduce a crucial voice of independent analysis in the humanitarian sector, which has long recognized the need for greater accountability and transparency.”

“Our establishment in Geneva will expose IRIN to new partnerships and reporting opportunities, particularly on humanitarian policy and financing,” added Howard French, Pulitzer-Prize nominated journalist, author and professor, and President of IRIN’s Board of Directors. “This event marks a new level of engagement with the community in ‘International Geneva’, which will only grow in the years to come as we settle into our new home.”

The event will also showcase IRIN’s newly launched investigative unit, and feature an exhibition of prints from its frontline photographers around the world.

A panel discussion moderated by Mr. French will be followed by the official ribbon-cutting and inaugural reception.

Please note: The event will be primarily conducted in English.

Attendance in person is by invitation. If you are interested in attending or covering the event, please contact Mr. Milan Magyar.

To register for the webcast, visit this page.

IRIN, originally the "Integrated Regional Information Networks", started distributing humanitarian news about Central Africa by fax from a small office in Nairobi in 1995. Over the years, its award-winning coverage expanded to the rest of Africa, South East Asia and the Middle East. IRIN publishes reports in English, French and Arabic on various platforms. Its body of work - an archive of 100,000 articles, 30,000 photos and hundreds of documentaries - has prompted debates in parliament, changes in policy, the introduction of new aid programs, the allocation of funding, and increased coverage of previously neglected subjects in the mainstream media. IRIN has a monthly online audience of about 250,000 website visitors, 40,000 email subscribers and millions more via media syndication and social media channels. Its audience is drawn from the aid, media, diplomatic and non-profit communities in some 190 countries. It is currently supported by the Governments of Switzerland and Sweden, the Swiss Lottery, and philanthropic foundations in Europe and the United States. 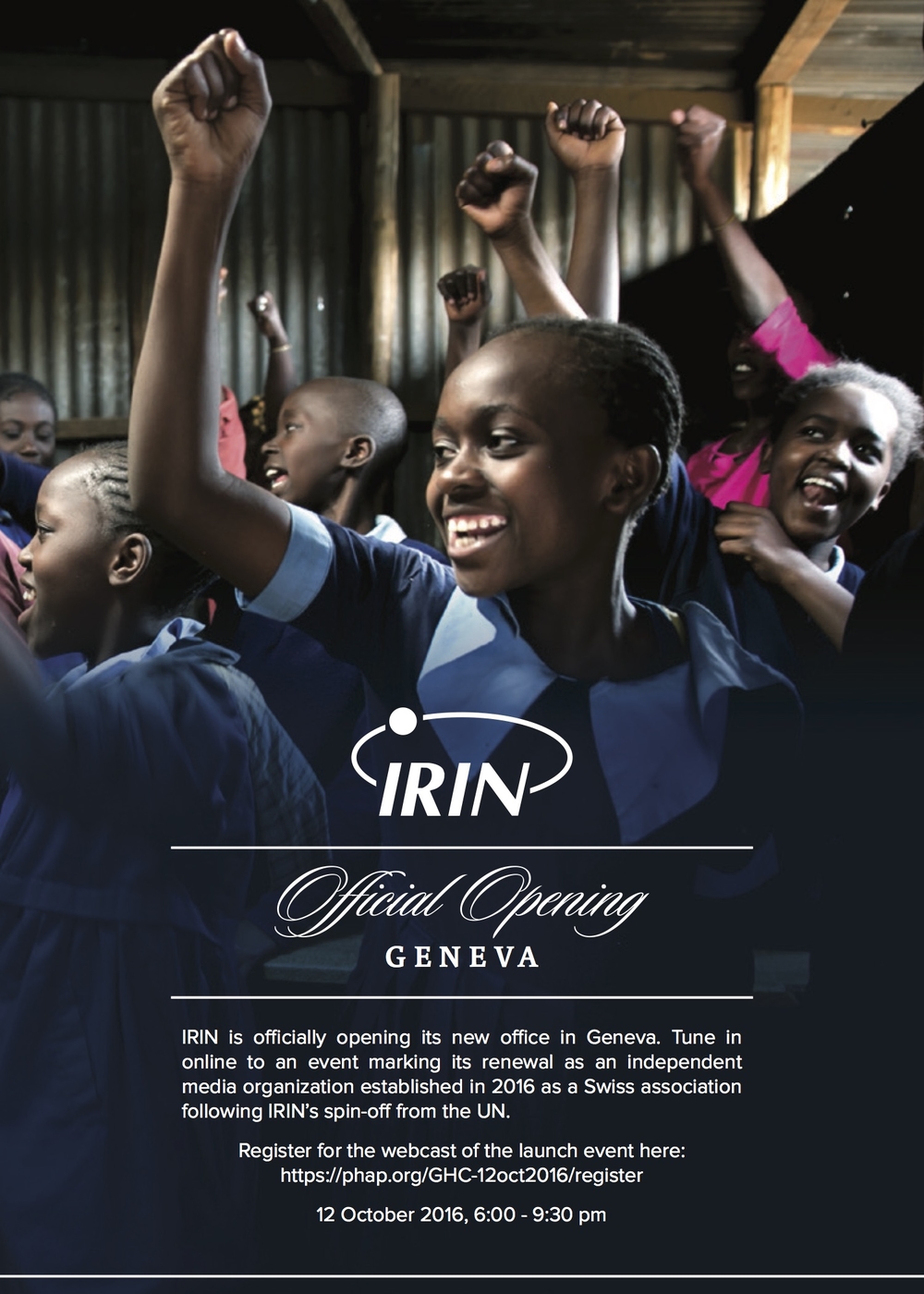 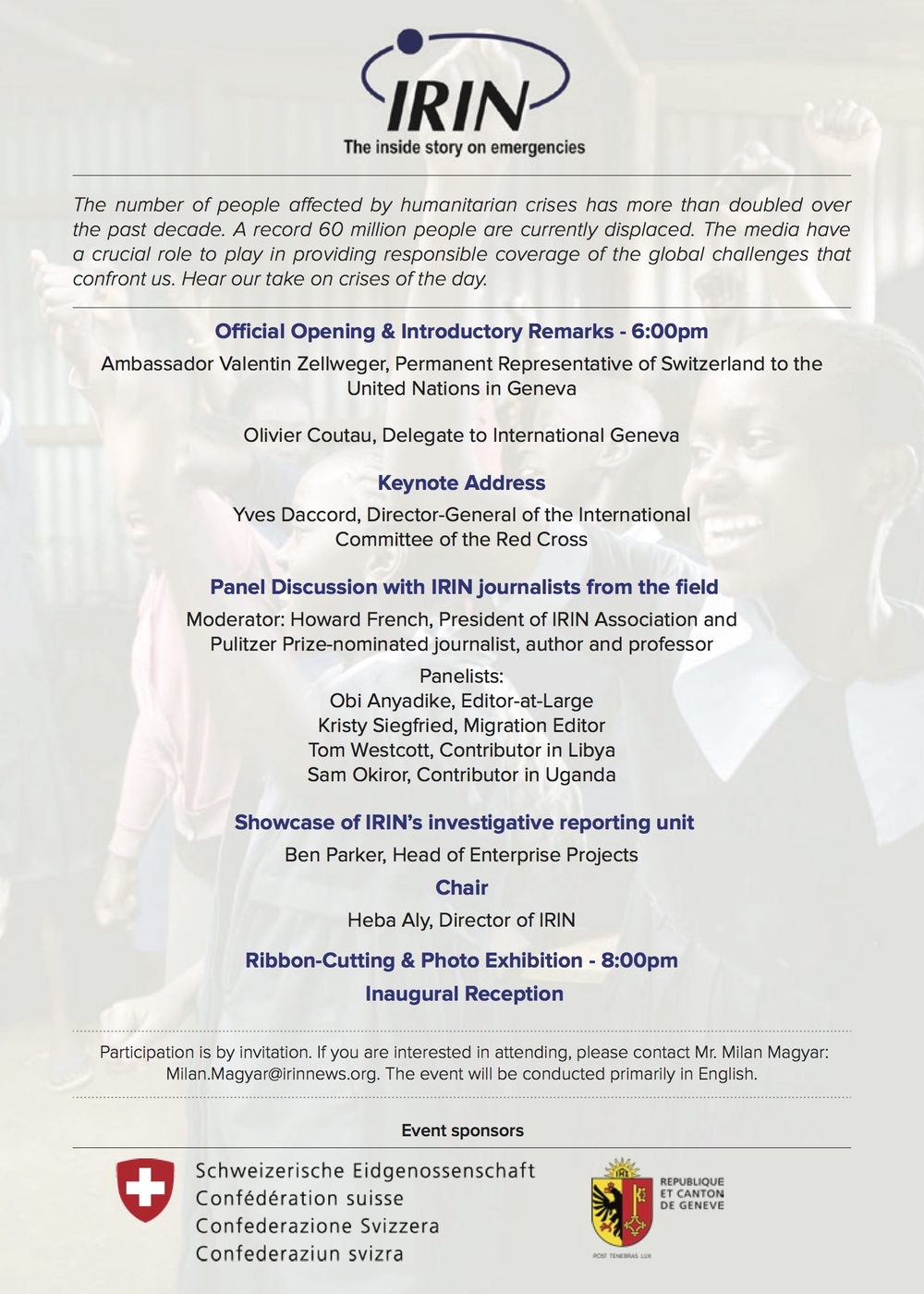