Under the scorching midday sun and the rattle of heavy artillery and Kalashnikov fire, three men on the Libyan coast are deactivating mines with electricians’ pliers, clad in flak jackets and helmets that will do them little good if a device detonates.

He is carrying three newly deactivated devices, including a frighteningly realistic fake rock packed with explosives. He is taking them off the battlefield in Sirte, where Libyan forces are edging closer to defeating the so-called Islamic State.

The militant group’s mines and improvised explosive devices (IEDs) have already left hundreds of Libyan fighters dead and maimed and, as government forces continue to advance into the centre of the town, poorly equipped demining units are struggling to deal with the aftermath.

International demining organisations are loath to work in Libya – a position that won’t have been helped by the death of a British de-mining expert in the Iraqi city of Ramadi on Monday – so these explosives threaten to leave a terrifying legacy for civilians long after the war is over.

Just 200 metres ahead of Mohammed and his colleagues, a child’s bicycle lies in the middle of the road. It looks innocent but the men have spotted a trap; a thin wire leads from the bike to a rigged tank shell.

Anyone attempting to use the road would have to move the bicycle, triggering the explosive mechanism. To add to the danger, Mohammed explains that the ground on either side of the road is also mined.

His unit – part of the intelligence services of one of Libya’s three governments – was drafted in to help when Libyan fighters found the sheer numbers of mines and IEDs in Sirte unmanageable.

The assault on the city, led by fighters from the UN-backed Government of National Unity that Mohammed is loyal to, began in May.

It has really put Mohammed’s skills to the test. Trained in the United States back in 2004, he said IS has used tactics he’s never seen before. Retreating militants have left a trail of devices across each district of the town, many disguised as, or rigged to, everyday objects.

“This stuff never existed before in Libya. We never saw a range of devices like these,” he says.

Doors, windows, even furnishings, have been connected to explosives.

It’s been deadly for the Libyan forces. Brigadier General Mohammed al-Ghasri, a spokesman for the military operation in Sirte, told IRIN that mines and IEDs had been responsible* for more than 80 percent of the 400 fighters killed and 20 percent of the 2,000 injured.

The dead include four commanders of military engineering units that specialise in deactivating and removing IEDs. Another demining officer lost both his arms when a device he was working on exploded.

“If the international community had helped us with this, we could have avoided a lot of bloodshed and losses”

“No international organisations or governments have given us any help with demining operations or even provided us with equipment we desperately need, such as metal detectors for finding mines,” al-Ghasri complained. “If the international community had helped us with this, we could have avoided a lot of bloodshed and losses.”

Al-Ghasri said the engineering units had dismantled 200 IEDs in the last fortnight alone. “But every day we find more and more, including explosives rigged with transparent fishing wire in civilian homes.”

In recently liberated districts of Sirte, fighters have uncovered makeshift factories where IS has been hand-crafting explosives, including grenades, bombs and IEDs. 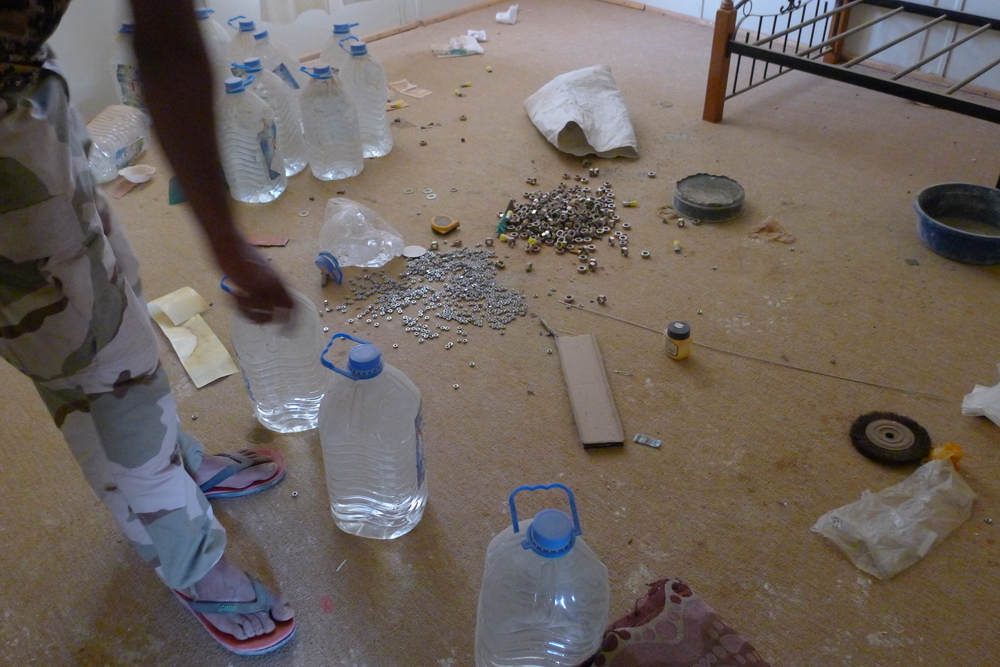 In one sprawling farm in the Hay Dollar district of Sirte, once a villa-lined luxury area favoured by former ruler Muammar Gaddafi’s inner circle, soldiers found dozens of bags of fertiliser piled next to metal components, ready to be packed into bombs to create lethal shrapnel.

There were pipe joints stuffed with explosives, racks of chemicals and gas masks, as well as bomb “recipes”.

In addition to these urban stockpiles, fighters have to deal with desert expanses and exposed rural areas on the coastline that IS controlled until recently.

“We desperately need help with special technologies for detecting IEDs and mines,” said army officer Salah Jarbar, standing on charred tarmac outside the ruins of a police station destroyed two months ago by an IS car bomb in the village of Abu Grain.

Abu Grain’s outlying desert, 150 kilometres west of Sirte, was left heavily mined by IS. Like al-Ghasri, Jarbar said even metal detectors would be of great help. “They are a cheap technology but really we need a lot of them.”

The threat to civilians

Once Libyan forces finish off IS in Sirte, al-Ghasri estimates it will take at least another five months to clear the town of mines, IEDs, and unexploded ordnance.

A number of international humanitarian demining outfits, including Handicap International and the Mines Advisory Group (MAG International) were active in Libya after the 2011 uprising until fighting in Tripoli in 2014 prompted embassies and international organisations to flee the country. Libya’s ongoing instability, including in the capital, has left most wary of returning.

“MAG is not working in Libya and we currently have no plans to restart,” MAG Fundraising and Communications Assistant Gayle Gabe told IRIN. As of September 2013, MAG alone said it had removed more than 495,000 explosive remnants of war across the country, including those found in ammunition stockpiles.

For now, local people living in former IS-controlled territory live in fear that any accidental stumble could be their last.

In the Ghardabiya district south of Sirte, a former teacher still too scared of IS retribution to give his name, said that with the group gone explosives were now his greatest fear and called on the international community to pitch in.

“We urgently need international mine-clearance organisations to come and check the areas around Sirte, especially in the desert areas, because there are just so many mines there,” he said. “We are afraid for our children and we are afraid for our future.”

Other areas already liberated from IS have begun to see the consequences of explosives left untended, with shepherds and herdsmen – whose livestock roam significant distances – in particular danger.

One shepherd from Bin Jawad, a town freed from IS in late May, has already fallen victim.

While searching for his sheep in late July, the shepherd drove over a suspected IS mine 10 kilometres south of the town. Local civil society activist Fadiel Fadel described the man – who sustained only minor injuries mainly from the shattered glass windows of his truck – as lucky, but said the incident showed the threat locals face.

As displaced former residents started to return to their homes after Bin Jawad was liberated, military engineering units dismantled IEDs left in homes but did not have the capacity to comb the outlying desert areas for mines, the activist explained.

“Mines are really dangerous and difficult, especially for farmers, and here we are looking at large areas that can’t be explored or cleared easily,” Fadel said. “The situation is quite critical and I don’t think Libya has the capacity to manage this problem alone.”

* (An earlier version of this story incorrectly said 400 fighters had been killed and 2,000 injured by mines and IEDs)

(TOP PHOTO: A demining team works on deactivating a mine hidden in a fake rock. Tom Westcott/IRIN)