The people of the Nuba Mountains in South Kordofan State are accustomed to hardship. Receiving little outside aid, they have managed to farm and survive despite the challenges of a protracted civil war with the Sudanese government. But that could be about to change.

For more than five years, the rebel Sudan People’s Liberation Army-North (SPLA-N) and the Sudanese army and associated militia have fought each other to a standstill in the border states of South Kordofan and Blue Nile. Neither side has attained a significant military advantage and both have been accused of abuses against civilians, although President Omar al-Bashir's forces are charged with the lion's share.

In a June interview with state-run Radio Omdurman, the governor of South Kordofan State (who is loyal to President Omar al-Bashir), Major General Issa Adam Abakar, disputed the notion of a military deadlock and said the Sudanese army was closing in on victory.

The fighting in South Kordofan generally takes place from November to June, before the region’s rainy season muddies all access points to the rebel strongholds in the Nuba Mountains, making many roads impassable.

This year marked one of the government’s largest campaigns yet. Al-Bashir's Sudanese Armed Forces (SAF) attacked the Nuba Mountains in late March with seven offensives. The SPLA-N repelled all of these attacks except in two areas – but the damage to farmlands and markets has brought dire consequences for civilians.

Attacks by al-Bashir’s forces and his warplanes have routinely killed civilians for years. What has changed now is that they are accused of waging a systematic war of attrition designed to squeeze civilians out of rebel-held areas by destroying farmland and markets, and blocking planting by civilians during the rainy season.

“This year, the Sudan government has used a new tactic of war – explicitly targeting food supplies,” said Osman Tola, executive director of the rebel agriculture ministry. “President Omar al-Bashir has tried through land offensives that have so far failed, so he is [now] trying to get people to move to [government] areas of control.”

According to the head of one aid organisation (who wished to remain anonymous), one of only a handful operating in the Nuba Mountains, Sudanese forces spent an entire week in late March-early April destroying all the farmland and water points in an area called Karkaria, which acts as a fertile greenbelt and water-flow area for the region.

“It’s done purposely,” said Ali Abdelrahman, director of the Nuba Mountains Relief, Rehabilitation and Development Organisation (NRRDO), a community-based support group. “To set fire to people’s homes, to drive away livestock – purposely to get them hungry. Once you get into that situation, you [either] die or join government-controlled territories whereby youth are recruited against their own people.”

Repeated calls to a Sudanese army spokesman for comment on the questionable tactics being used in its campaign went unanswered.

On 18 June, al-Bashir declared a four-month unilateral ceasefire between the government and rebels in South Kordofan and Blue Nile states; a largely moot gesture since the ceasefire aligns with the rainy season, when fighting naturally subsides. The declaration came too late in the planting season for staple crops, leaving a devastating food gap for next year.

Normally, government troops retreat before the rainy season begins in earnest, fearing their supply lines and exit points will be cut off. But this year, their forces appear set to remain in key positions, displacing the residents indefinitely and preventing planting.

This is because while the ceasefire curbed fighting, it also allowed SAF garrisons to entrench themselves in two of the Nuba Mountains’ most productive agricultural areas: Al Azarak in Heiban County and Mardes in Delami County. The rebels had surrounded the two garrisons, effectively blocking most supply lines to the two SAF enclaves ahead of the ceasefire, according to rebel spokesman Arnu Ngutulu and eyewitnesses. The ceasefire allowed SAF breathing room from these offences, Ngutulu told IRIN.

The Sudan army’s ongoing presence in Al Azarak and Mardes blocks people from farming these vital areas. People who normally walk for hours from outside villages to farm the rich soil in Mardes, for instance, are now displaced primarily into the mountains of Tongoli, unable to plant in the high-yielding farmland.

Haider Anur fled the constant barrage of shelling in Al Azarak. His wife and five children had no time to carry anything with them. Now living displaced, partly sheltered by rocky crags in Hajar Bako, a nearby village, he worries for the future.

“Al Azarak is what is feeding Heiban County. It’s a large farming area and good grazing land,” Anur said. “Al Azarak is so important to us and for them [SAF] to be there… some people might die of hunger.”

Government Antonov warplanes and Sukhoi fighter jets have also hit civilian areas, especially farmland, with 185 bombs dropped in May, according to the South Kordofan-Blue Nile Coordination Unit, an organisation that monitors food security and displacement in the two areas. Agriculturally-rich Heiban County alone had 62 bombs dropped on it in May, including one in Heiban town that killed six children.

“As you can see, they mainly bomb civilian targets, just hitting indiscriminately,” said Mohamed Adam, whose home was destroyed in an Antonov attack on his village in June.

Displaced from their farmland, many civilians find themselves trapped, hiding in caves from March to June: their survival dependent on winning an excruciating waiting game.

Faiza Majar was displaced from Al Azarak, losing last year’s harvest, which she had relied upon to feed her five children, one of them a four-month-old infant.

“I have no idea where we are going to farm, even where we can farm,” Majar told IRIN. “They [SAF] would bomb and shell us. It was so difficult to just get water.” 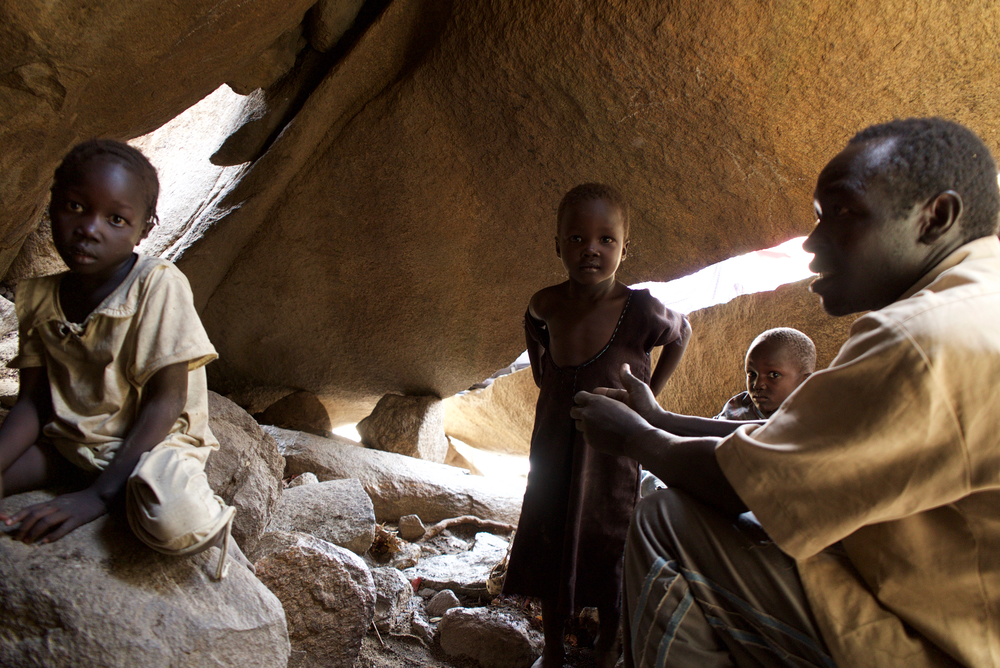 Nuba Reports/IRIN
For some families, caves are the only shelter from warplanes

In 2015, the rains didn’t start until July, roughly six weeks later than usual, causing poor harvests across all five of South Kordofan’s counties. According to the Famine Early Warning System, a US-funded food security monitoring body, cereal production from the 2015-2016 agricultural seasons is estimated to be 35 to 40 percent below the five-year average.

Meanwhile, restricted access due to conflict areas and reduced supplies of commodities and currency is driving up market prices, further aggravating civilians’ hunger. Besides striking at farming areas, al-Bashir’s forces have also targeted frontline markets that act as lifelines to the Nuba areas, said Kukuande Karlo, field coordinator for the South Kordofan-Blue Nile Coordination Unit. In May, SAF launched ground offensives against two key black markets based in West Kadugli and Delami counties, he said. SAF-aligned militia also reportedly breached the ceasefire by attacking another farming and market area, Lima, on 11 July and 14 July.

Civilians in South Kordofan can’t rely on the South Sudanese pound, since it fluctuates wildly, and few have access to Khartoum’s more stable Sudanese pound.

“Since you can’t get Khartoum money [Sudanese pounds], you buy goods via dollars, meaning you have to exchange the money, adding cost,” Kuku explained.

Traders in the rebel-controlled capital Kauda say the rebel government attempted to control prices but this only led to them stopping sales since they couldn’t make a profit. The price of staples such as sorghum has doubled and may even triple in the months ahead. Traders are even beginning to stockpile the crop for fearing of running out of supplies altogether.

The net result of all these factors is severe hunger during the ‘lean season’ through August this year, and, due to the conflict and ongoing planting restrictions, potentially worse to come in 2017.

For some areas, the conflict has already brought a deadly food crisis. In February, the UN said 242 people, including 24 children, had died of hunger-related illness in eight villages over a six-month period in isolated Kau-Nyaro and Werni counties. The rebel-held region is trapped: a hostile South Sudanese militia in the south and the conflict in the north has left the population, estimated at 65,000, cut off from food supplies.

Those who have managed to leave Kau-Nyaro have walked to the refugee camps in South Sudan in Yida and Ajuong Thok or to government areas in Abu Jubaiha County, said the mayor of Kau-Nyaro, Mohamed Nalteen. Some of those walked all the way with rocks tied to their feet as they lacked shoes to cope with the mixed, undulating terrain.

“People’s reserves of grain are now finished,” the mayor told IRIN. Food rations ran out due to government aerial bombardments from April 2015, making it impossible for people to farm, he added.

Karlo, field coordinator for the South Kordofan-Blue Nile Coordination Unit, said rebel-controlled areas in the northeast like Al Abbassiya and Rashad also remain isolated and people there are facing severe hunger too. Some people in Rashad have resorted to eating poisoned roots, in some cases not boiling the vegetation enough and dying from the consequences, he said. 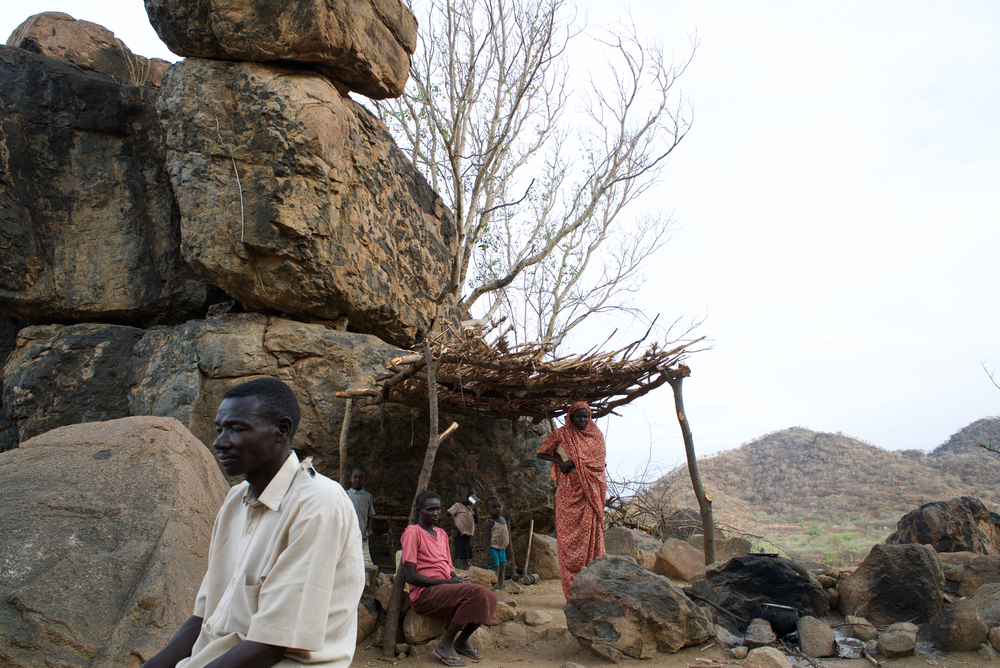 Nuba Reports/IRIN
With food reserves used up and nowhere to farm, Al Azarak's civilians are waiting for help that may not come

The danger now is that such high levels of food insecurity could spread to previously safe areas.

“I’m so worried,” Benjamin Kuku, executive director of the New Sudan Council of Churches, a faith-based humanitarian organisation, told IRIN. “When 242 people die in eight villages alone, then it makes me worried. I don’t know where people are going to get food in the months ahead.”

Aid agencies are reporting that children in Heiban County are already malnourished, but NRRDO’s Abdelrahman said the real worry is next year.

“Host communities have already shared their food with those displaced, so no one will have anything left,” he told IRIN.

The issue of humanitarian access remains central to the seemingly unending peace talks. It was a key point of discussion during March peace talks, the eleventh such initiative, but neither side could agree on the route for such aid to take.

Khartoum insisted on cross-line humanitarian assistance emanating from Sudanese territory while the rebels requested it through adjacent countries.

The debate is not new: in December, Sudanese and international organisations and personalities wrote a letter to UN Secretary-General Ban Ki-moon and US President Barack Obama asking them to uphold international humanitarian law and ensure assistance is provided to the two conflict areas in South Kordofan and Blue Nile states.

“For obvious reasons, the people of the Two Areas [South Kordofan and Blue Nile] do not trust the government of Sudan, and many parts of the population may well refuse to accept assistance that emanates from government-controlled areas,” the letter reads.

Many in rebel-held Kauda believe a more vocal, engaged international community is needed to break the humanitarian deadlock.

“Look at the case of Darfur,” Karlo said. “It is because of the international presence and media coverage that triggered pressure against Khartoum and aid to the region. Why is the international community silent when it comes to us?”

Self-reliant, the Nuba people are not waiting for an international response to solve their harvest challenges. Fearing attacks, more and more people are farming in the less arable but more secure mountainside areas using step irrigation as opposed to farming in the more lush valleys below.

“This is how we survive,” said Hashim Abbas, a farmer in Lewere village. “It may not produce much [food] but at least we know that we can eat tomorrow.”

Tom Rhodes is the Managing Editor for Nuba Reports